"The comfort of strangers" by Ian McEwan

The extract from ‘The comfort of strangers’ by Ian McEwan is set in the house of a middle-class family made up of two parents and three children in this extract, the two sisters of Robert in the absence of their parents use their mother’s untouchables and walk around acting like “American film stars.” They then return the things back to where they found them before their parents’ return. “Later in the afternoon they went to the bathroom and washed everything off.

Don't use plagiarized sources. Get your custom essay on
“ “The comfort of strangers” by Ian McEwan ”
Get custom paper
NEW! smart matching with writer

In the bedroom they put away all the pots and jars and opened the windows so mama would not smell her own perfumes. They folded the silk stockings and suspender belts away, exactly the way they had seen her do it. They closed the window and we went downstairs to wait for our mother to come…” their little brother when put through the mill by their father about how they spent their day, tells him the whole truth.

The extract concludes with Robert feeling remorseful and afraid to confront his sisters. This finale alleviates our understanding of the rhetorical question at the beginning of the extract “Did my sisters hate me?” In this essay, the writer’s use of detail and his veiled meanings will be explored.

Some form of gender and age gap

The writer in this extract establishes some form of gender and age gap between Robert and his sisters, Eva and Maria. The gender gap is brought to light when the boy sits on the bed whilst his sisters put on make-up and clothes.

If Robert had been a girl, he would have indubitably joined them but since he is not, he is excluded. This separation is probably what caused him to let the cat out of the bag because if he had taken part, he would not have done that.

It can also be construed from the passage that Robert is quite terrified of his father. He seems to give his father a great deal of reverence and believes that his father is omniscient. “I believed he knew everything, like God.”

Furthermore, the mother seems to be an absent figure since she is not present for supper and seems to be quite strict. This is because she cautions her children not to touch any of her stuff.

A reader can gather from the passage that the family is either rich or well-to-do due to the writer’s use of descriptive detail. This is because the writer mentions perfumes, make-up, stockings and dressing tables which a poor wife will probably not have.

Also we can tell from the writer’s descriptions that the two sisters took great precaution when they were putting back the things they used. “They put away all the pots and jars and opened the windows so mama would not smell her own perfumes.” They even thought as far as to open the window which means that they were really bent on concealing their actions.

The fallibility of outward shows is put across in diverse ways in the passage. An example is the sisters’ appearance after they had put on the make-up and clothes. They acted and looked like “American film stars” yet they were merely “tall schoolgirls.” If someone had met these sisters whilst they were dressed up and had been asked to describe them he/she would have said they were sophisticated, eloquent and of a high class. Yet if that same person met them during dinner, they would have argued fervently that they were not the same people. This shows us how illusive and deceptive judging by appearance can be.

Another situation in which the writer warns us on the unreliability of appearances is when during the course of Robert telling his father what happened while he was away, his sisters laugh and shake their heads as if what Robert is saying is ridiculous and untrue. However, they are just putting up an appearance in order to escape trouble.

Comparing the father to God

Furthermore, the writer compares the father to God making it seem as if he has some supernatural powers. Robert also seems to think that his father knows everything due to his father’s confidence and commanding nature and aura. However, if he really knew everything, would he ask for a retelling? No! He would rather start accusing them. This teaches to be careful not to fall for appearances.

This extract is structured in such a way that it starts with a rhetorical question which makes us think what could have happened that would cause Robert’s sisters to hate him therefore creating suspense and catching the readers’ attention before what truly occurred is told. The conclusion of the passage is a cliff hanger which has the theme of suspense thoroughly embedded in it.

In conclusion, the passage brings to light various aspects of our everyday life such as gender inequality, betrayal and fake or deceptive appearances and gives free but hidden advice on these issues.

"The comfort of strangers" by Ian McEwan. (2020, Jun 02). Retrieved from http://studymoose.com/the-comfort-of-strangers-new-essay 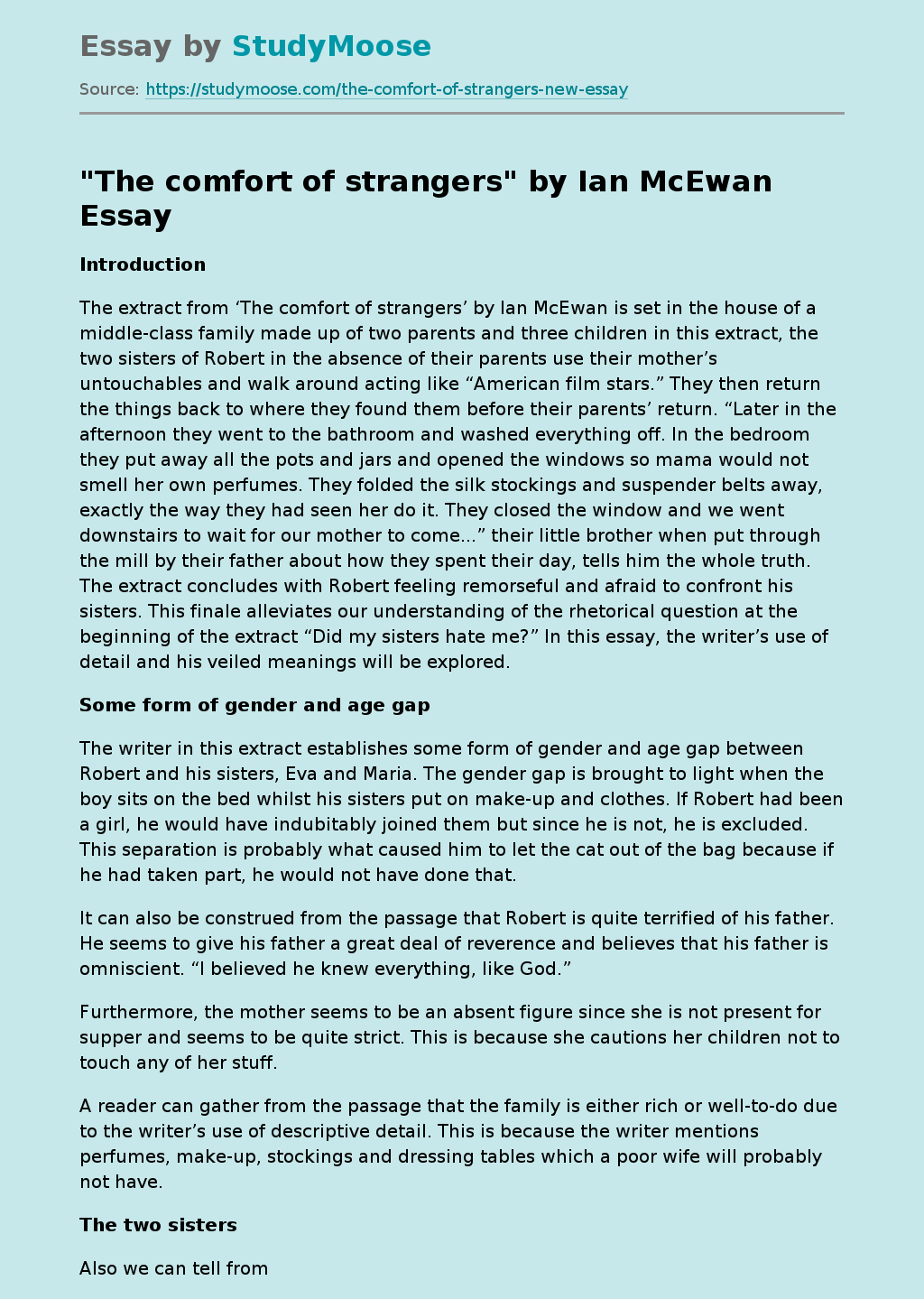