In 1935, Briony Tallis is 13, living in England on her family’s estate. At this time she is a budding adolescent, with literary tendencies. At 11 she had already written short stories and for the occasion of her eldest brother, Leon’s homecoming, she wrote a play “Trials of Arabella” to be performed at the family dinner that night when the story “Atonement” opened. In the events that followed during that fateful night at the beginning of the story, the extent of Briony’s pubertal emotionality combined with her imagination was devastatingly revealed.

Her distorted view of events led to the bitter separation of lovers, Robbie & Cecilia, the wrongful accusation of an innocent man (Robbie) and the eventual freeing of the guilty. This is where the story takes off and it follows the vein of Briony’s belated realization of her fatal error and her perceived Atonement for the emotional devastation she had caused at the precocious age of thirteen. Briony Tallis’ character is exhibited in the course of the story.

The transitions she underwent from a wildly imaginative adolescent to a ponderous 77-year old woman are shown in the way she told & retold her story. Indeed, she is a flawed individual from beginning until the end, even as she tried to make up for her inequities. At the beginning, Briony is seen as a snotty girl, and then preoccupied with the performance of her play, bossing her cousins around as she tried to organize the cast. She appears to be child who’s used to having her way, being the baby of the family.

However, at that time, the play did not materialize because of the difficulty of assembling her easily-distracted and occupied cast members. Frustrated, she goes around the estate to vent and chances upon several encounters between Robbie and her sister Cecilia that piques her interests. In these parts of the story, one can see how Briony pieced together a story based on these encounters which she interpreted with her wild imagination. The lustful letter Robbie accidentally sent Cecilia in place of a love not, fueled Briony’s skewed ideas even more.

When she chanced upon the lovers having sex in the library, her incomplete understanding of the nature of the relationship of Robbie and Cecilia, she forms a wrong summary of Robbie’s character, thinking that Cecilia was being coerced and was not actually a willing participant. This knowledge of Robbie’s carnal side led to her hasty assault of his character by identifying him as his cousin’s sexual attacker, even without confirmation. There are many reasons why Briony could have conceived doing this at the age of thirteen.

First, it must be that she wanted attention and seeing the reaction of those around her, she plunges head in into a half-truth, regardless of its disastrous consequences, either oblivious or uncaring as to how it can ruin a man’s life. Second she seemed to firmly believed at that time in her own judgment, being used to having her way, being listened to, being made to believe she was mature than most girls her age. Lastly, she must have actually believed she was protecting her sister “… even if Cecilia failed to acknowledge her debt” (McEwan, 201).

These are some of the reasons that the novelist, McEwan must have wanted his readers to surmise, after describing the young Briony. Whatever the reason might have been, the consequences of Briony’s accusation of Robbie led to the cascade of events in the story. In the years between Briony’s 13th year and 77th year, her life is flashed before the readers as a story within a story. It is revealed that it actually the year 1999 and she is a successful writer now . She is older, wiser and she has been trying to repair the ruin she had caused in the lives of Robbie and her sister. Her atonement takes many forms.

She became a nurse to help the soldiers during the war. She had also written a novel “Two Figures by the Fountain”, which was an attempt to re-tell the story of that fateful day she changed the fates of two people’s lives. More importantly, though belatedly, she finally admitted to herself that she had in fact, done an injustice which twisted the fates of two lovers and jeopardized their chance at happiness. In the narration of what transpired in the lives of those involved, the older Briony uses different points of view. She seems to be attempting to reconstruct events that transpired between 1935 and 1999 in the lives of Robbie and Cecilia.

The novel she is writing is a way of purging her ghosts. In this way, it can be seen that this form of atonement is still self-serving. Although she may believe that she is trying to make things right by telling their story, she seemed to be just airing out what she hoped should have happened in order to relieve her burden of guilt. .. Then she would be free for the rest of the day. She knew what was required of her. Not simply a letter, but a new draft, atonement, and she was ready to begin. ” (McEwan, 451) This part was actually the ending to Briony’s novel. This was, in actuality, a rendition to the ending.

This was Briony’s point of view. It is this author’s point of view that indeed, Briony’s character is deeply flawed. It seems that her actuations are merely defense mechanisms. Even her resolution, seemed to be, but a way of compensation. With this statement, this writer believes that truly, Briony’s character is deeply flawed. She is enmeshed with her imagination and the power she yields with her pen. This writer believes that though her character claims to be utterly sorry, what she had done is already unforgivable and she knows this. She can never turn back time. She can never really atone for her sins.

The problem this 59 years has been this: how can a novelist achieve atonement when, with her absolute power of deciding outcomes, she is also God? There is no one, no entity or higher form that she can appeal to, or be reconciled with, or that can forgive her. There is nothing outside her. In her imagination she has set the limits and the terms. No atonement for God or novelists, even if they are atheists. (McEwan, 479) All of Briony’s efforts seem somehow to this writer, a way of purging, and a way of exorcising the ghosts unleashed by guilt at the realization of what she had done.

The years between 1935 to 1999 were hard for Briony but it was never as hard for the lovers who were separated. She could never undo what she had started when she was thirteen, no matter what she did or believed. In there lies her flaw. In her frustration, as a last resort, and with resignation, she decides to immortalize the lovers with a happy ending. She claims that in the end: .. The lovers survive & flourish. As long as there is a single copy, a solitary typescript of my final draft, then my spontaneous, fortuitous sister and her medical prince survive to love” (McEwan, 479).

In including this, McEwan hopes that Briony can manage to come off as someone who is still sympathetic. However, for this writer, Briony’s character only appears weak, hiding behind the curtain of fiction, determining an ending far opposite from the truth. Then again, as Briony claimed in her statement: “If I really cared so much about facts, I should have written a different kind of book” (McEwan) To this writer however, this is only an extension of the flaws of Briony’s character. It is a weakness. As she admits herself: .. I’m too old, too frightened, too much in love with the shred of life I have remaining.

I face an incoming tide of forgetting and then oblivion. I no longer possess the courage of my pessimism. (McEwan, 478) Though Briony believes the happy ending should be her form of atonement by immortalizing them in their happiness, it only serves as a shield for her as she nears the end of her time. It is a shield, in order for her to say that “at least I have done something. ” I like to think that it isn’t weakness or evasion, but a final act of kindness, a stand against oblivion and despair, to let my lovers live and to unite them at the end.

I gave them happiness, but I was not so self-serving as to let them forgive me. Not quite, not yet. (McEwan, 480-81) The happy ending contrived by Briony is a means of escape, from the point of view of this writer. Based on the totality of the novel, she is still excusing herself, even up to the very end. This weakness overshadows any other merits of Briony’s character and her resolve to give the lovers, whose happiness in real life she made impossible, the blissful ending they should have had is still as self-serving as her other attempts for atonement.

“When I am dead, and the Marshalls are dead, and the novel is finally published, we will only exist as my inventions… (McEwan, 478) Zooming out, perhaps the actual ending of the novel is McEwan’s way of redeeming the lead character Briony, after the severity of her description, as told in her voice. It may be that at the end of the novel when all has been said, done and cried for already, McEwan wishes to believe that Briony is still sympathetic. His ending might have been that attempt to make readers believe that she is not so hopeless.

In a way, McEwan’s hope that Briony can still is viewed as “sympathetic” may also be interpreted as his own “atonement” for painting this character in such flawed light. In taking this point of view, another conclusion may be drawn from Briony’s character and the story’s ending. It is in the interest of McEwan to show Briony as a deeply flawed character who is ultimately contrite in the end. As can be seen by the many attempts at compensation in the story, Briony is truly sorry for what she had done. Her life, she dedicated to making up for her mistakes.

The ultimate punishment for her crime was the lack of redemption- that in her lifetime, she never had the chance to set things right; that in reality, she was never able to redeem herself. In conclusion, McEwan’s hope that Briony’s character, though greatly flawed, may still be viewed as sympathetic is understandable. However, for this writer, Briony’s attempts at compensation to the very end comes full circle back to her, as an act of self-preservation for her peace of mind in her remaining years. Her character is irrevocable flawed from beginning to end. 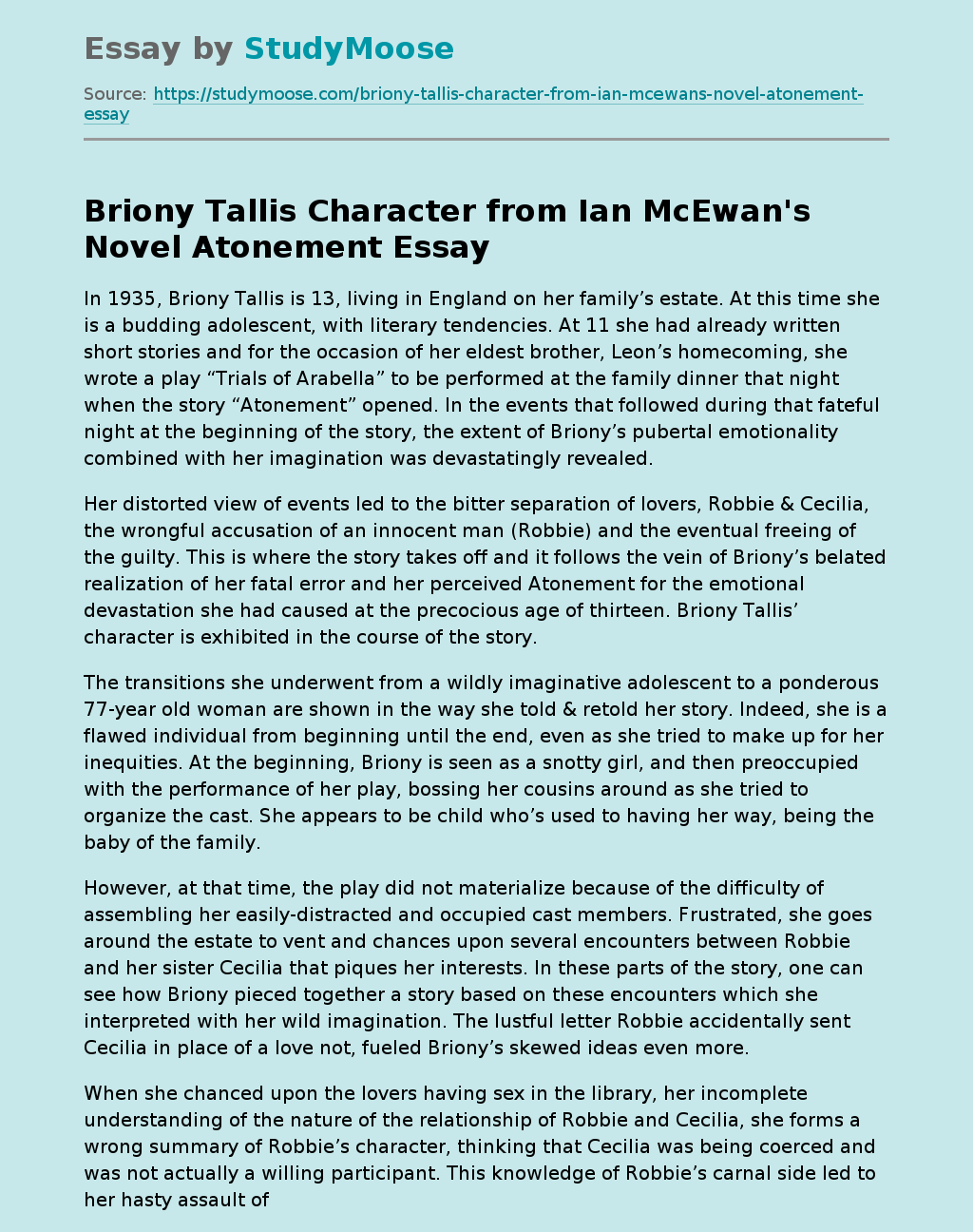