Essay Topic: Discuss Point of View as a Technique and Theme in ‘Atonement’.

Introduction The use of varied points of view, known as , free indirect discourse, or variable internal focalisation, omniscient narration is used in fiction to create particular themes in such books as the ‘Atonement’ by Ian McEwan, Jane Austen and many other authors. Using these styles has been spoken of as heightened literary skills which delivers to the reader what the author desires to reveal of their characters. It is an advanced and old style that can be used to bring forth the many perceptions created by the writer.

Don't use plagiarized sources. Get your custom essay on
“ Essay Topic: Discuss Point of View as a Technique and Theme in ‘Atonement’. ”
Get custom paper
NEW! smart matching with writer

This essay will discuss how point of view is used as a technique and thereupon the theme of atonement within free indirect style, variable internal focalisation and omniscient narration ultimately narrated by an aging Briony. The origin The origin of these multi-narrative styles dates back to pre-Jane Austen and also used in children’s literature ‘which often needs to allow a child – or the child’s proxy, an animal -to see the world through limited eyes, while alerting the older reader to this limitation’.

A feature in ‘Atonement’ written by the elder Briony, is that she ‘imagines that by telling her life story’, it will act as atonement, but in reality ‘ she is psychoanalysing herself’. She (promises to atone in her book) but does not gain self-comprehension and the question remains: how can she get beyond, “the fact that these minds are, ultimately her own creation? ” (Marcus, 1994) so in using the many narrative styles she hopes to absolve herself through reiterating her own viewpoint of childish thinking and still in fantasy land imagines she knows the thoughts of the people she used in her tragic lies.

Childs (276 ) says, “ In McEwans work, childhood is a sleep from which everyone must awaken to face an adult world where their former actions will have unforeseen circumstances. Childhood is also a realm adult’s seek to control but to which they also seek to return”. Usefulness and purpose The usefulness of using the many viewpoints and in simple terms reveals the internal dynamics of the character/s. Chapter two shifts to focalising the character of Cecilia, chapter three’s point of view slides to Briony, chapter four returns to Cecilia and chapter six to Emily Tallis. The central consciousness belongs to a writer and, in Part One, to a thirteen-year-old girl. ” (Hidalgo, 84) This is the typical device in free indirect discourse of telling the same story from varied viewpoints. Free indirect discourse The purpose of free indirect discourse includes, “a more comprehensive method of representation — one which many times makes indistinguishable the thoughts of the narrator and the thoughts of a character”. Georgetown, 1) This blends the character’s dialogue as well as the narrator’s story. In particular, the narrative shifts and slides into Robbie’s mind; the pace slides into a poetry style of writing “A drop of water on her upper arm. Wet. ” (McEwan,78-79) with many quick sentences and then returns into the long leisurely pace of narrative. Sliding into Robbie’s mind materialises the writer’s perceptions, how she thinks Robbie’s mind works.

Candidate, (4) mentions “free indirect discourse is used to convey Briony’s” perceptions by subtly using “frequent modal verbs – ‘how could she refuse a cousin’ (McEwan,175) – and by sentence adverbials – ‘of course she was taking the part of Arabella’ (McEwan, 159). ” Further going on to say, “sometimes, text orientation shifts to directly convey her perception: “Briony heard at last the sound of wheels on the gravel below her bedroom window, and snatched up her pages and ran down the stairs, across the hallway and out into the blinding light of midday” (72), through narrative.

These three viewpoints are “through the eyes of Briony, then of Cecilia, then of Robbie,”. (Finney, 95) Finney (98) also packages it by reiterating through Connolly’s description that ‘Two Figures by a Fountain’ (McEwan 30,39,79) does indicate that she is already making a first attempt to project herself into the consciousness … of Cecilia and Robbie”.

As the aging Briony puts it, “she need only show separate minds, as alive as her own, struggling with the idea that other minds were equally alive”. (McEwan, 40) “The effect of variable internal focalisation is to shift the focus into the consciousness of characters which is worked through an omniscient narrator and then channelled into the focus of narration and character further specialising the narrator method to develop the character’s perception of different events.

Aging Briony thinks that “the reader is given a privilege” (ibid, 137) for a view inside a character’s private thoughts but the resounding question is, “How can Briony do justice to the characters when she didn’t really know their minds … when “the fact is that these minds are, ultimately, McEwan’s or Briony’s own creation. ” (Marcus, ) Omniscience The omniscient value for the reader is to understand what is going on in the characters’ minds to “…experience different narrative perspectives”. Broken English, 1) Finney says, “Although there is only one narrative voice, …, the aging novelist, how this works is in the “novel’s opening two sentences” where someone else is describing the play and using third person throughout, for example “…was written by her in a two-day tempest” … “ her cousins from the distant north”. And Childs (276) says, “the novel’s intrigues centre on perspective”. This is important to the novel as Briony is trying to understand what she did and the other characters’ point of view in the tragedy.

She uses this style of storytelling as a flexible way to express an act of empathy and atonement, yet we can’t see how amends were ever actioned by Briony. It is possible that people do venture into fantasy of what this person said and that person said to absolve their actions. Childs (276) says “McEwan maintained that the nature of empathy is to see oneself as another – and the basis for compassion and empathy is the imagination”.

So using her imagination to enter into the minds of her characters is to show empathy and thereupon “she dwelt on the perceptions of the three figures. ” (McEwan, 313) Narration: third person v first person A third technique is narration in the third person and the audience relies on the events shown through three perspectives by the elder Briony. But how can the elder Briony read the characters minds when in reality she is incapable of knowing them. In ‘Atonement’ it shows the elder Briony as the narrative voice that knits all views together and tells the story.

Narration also lets us in on Briony as a child where she has a passion for order “passion for tidiness … for an unruly world could be made just so” (McEwan, 20) The more viewpoint characters McEwan uses in this story, the less available space the audience gets to know a character indepth. This can result in a reader being unsatisfied but in this case the person it exposed was Briony which led us to the shock of discovering that the story had been written backwards by the 77 year old Briony with “traces of Victorian melodrama and fairytales”. (Candidate, 12) Conclusion

Finally, Atonement is “a remarkable book because it takes advantage of the readers’ enormous flexibility in taking up the different techniques of viewpoints and deploying attention in creative and sometimes conflicting ways” (Harold, 143) Briony Tallis works to imagine the perceptions of all characters into writing of her own conceptions instead of interviewing them to find the truth, as reality always outdoes the fantasy. All in all, the skill of the writer left us with a slap in the face where the reader did not know what was real and what was not. Also the story was written by the aging Briony as an act of atonement.

Essay Topic: Discuss Point of View as a Technique and Theme in ‘Atonement’.. (2020, Jun 02). Retrieved from http://studymoose.com/essay-topic-discuss-point-of-view-as-a-technique-and-theme-in-atonement-new-essay 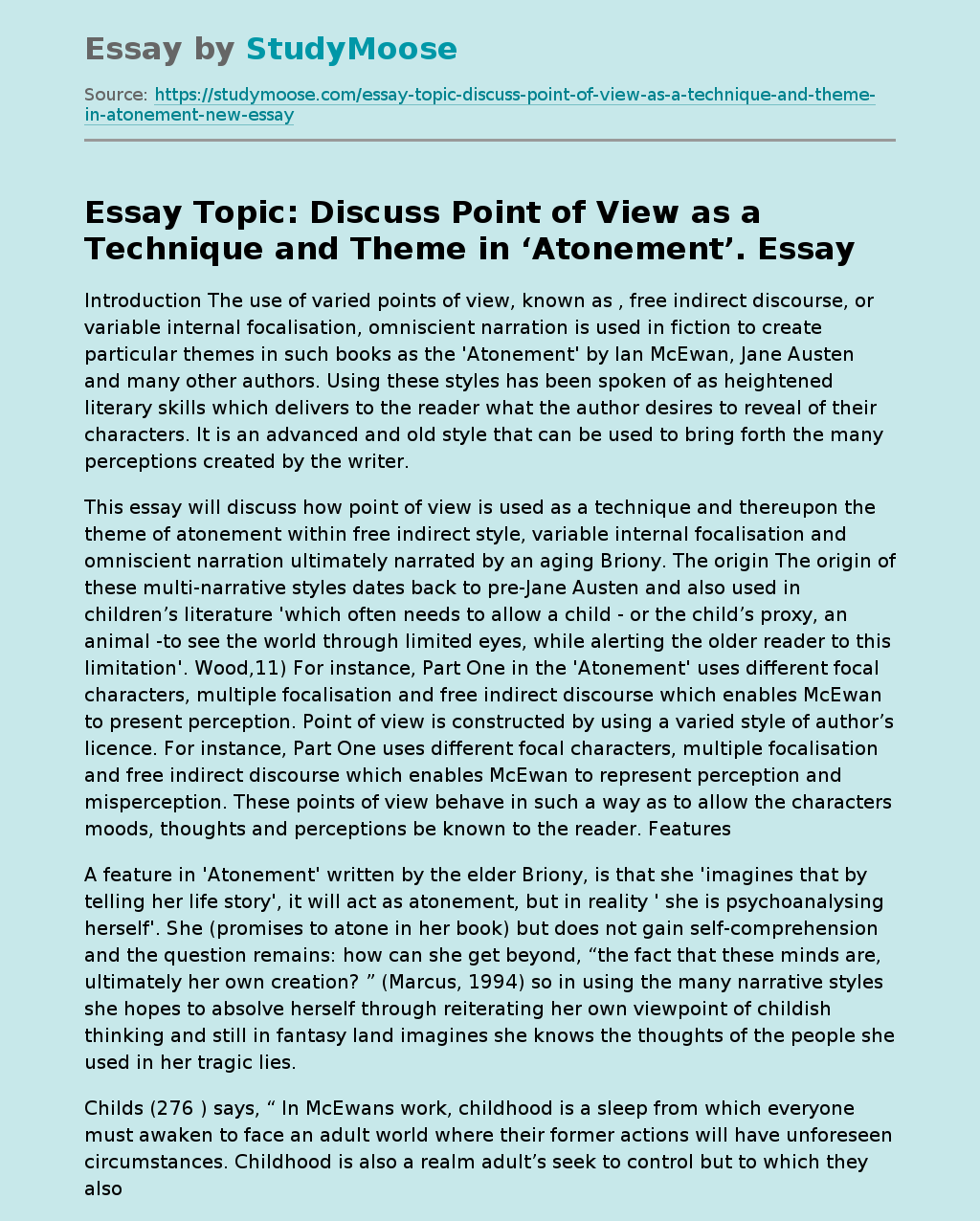