The Market Revolution, one of the most commonly passed topics, at least in a public-school setting. All that was passed from it was the California Gold Rush and the creation of Levi’s Jeans and Wells Fargo . Maybe a squeeze from Andrew Jackson’s Indian Removal Act. But nothing else. No mention of all the industrialization or the other things that happened in the Market Revolution.

Don't use plagiarized sources. Get your custom essay on
“ The Market Revolution: Industrializing Before the Industrial Revolution ”
Get custom paper
NEW! smart matching with writer

Here, we will be talking about the industrialization before the Industrial Revolution happened.

The Industrial Revolution had its technical start during the Market Revolution. During that period, there were more technological inventions coming around, such as the steamboat and the telegraph, making it much faster and easier for people to communicate and travel. The city of New York joined in by making the Erie Canal, thus making shipping much easier. Trains had also come into play and, in early 1869, the last spike in the Transcontinental Railroad had been driven down . The introduction of wage labor had started its influence in American culture as well.

The people had also thought that it would allow them to get paid better because they would not have to make so much to get a decent amount for their labor.

Thomas Jefferson, however, believed that the idea of wage labor was constricting on the idea of American freedom. Many others believed him and went westward in search of land and opportunity, leading us to Manifest Destiny. The California Gold Rush was another factor, the illusion of getting gold nuggets as if they were nothing drew in thousands of men and their wives. With so many people leaving to go westward, many factory owners did not have many people to work their machines until immigrants came in to replace the people who had left. The immigrants were considered better, in a twisted kind of way, to the Americans because they could produce more items for the people and the owners could pay them less than what they would pay an American for.

The progress of faster communication had started its turn during the market revolution. The semaphore had come before the telegraph. The semaphore was hilltop stations with moveable arms and telescopes to see other stations, it was not great if the weather that day, week, or month was not partly cloudy or clear skies. It led to the invention of the telegraph, a short message system that allowed faster communication. The telegraph was widespread by nineteenth century, it’s easier way of communication made the business industry easier to understand as people could now know quicker what they were ordering, how fast it would be getting there, and how much they would be paying for their shipments.

The American government had also developed during the Market Revolution. The government had started paving roads people could use, thus having more people use them and lower the cost of damages to their wagons. They had allowed many states to enact toll roads to help with the construction, but most had fallen through due to states allowing “shunpikes”, a small detour, to avoid having to pay the high cost of maintenance of the toll roads. The people began to realize that while these roads were efficient and productive, the way of transport was not. The horse-drawn carriage was not ideal for travelling over long distance, due to the need of having to care for the horse over a long distance versus a shorter distance, thus comes in the water mode of transport.

The horse-drawn carriage was ideal for short distances. But, the horse would often struggle to cross large rivers and the care over the distance would cost more than the trip itself. That’s when the steamboat enters in. Invented in 1803 but not introduced to America until 1807, it made travelling by water much easier than before. The steamboat had proven to people that it could travel against currents and get people to where they would need to be much faster and cheaper than before.

Coming in, as briefly mentioned before, was the start of railroads and trains. The effectiveness was questioned as funding for new ones came in. Many opposed the funding of the railroads and religious leaders thought trains to be sacrilegious. Owners of inns and taverns thought it would ruin business. The people would protest this and often turn violent.

The California Gold Rush had brought many people into California under the promise of gold and many left without it. While some did strike it rich, others struggled for hours to find even a small speck. Many people went and tried their luck anyways to get out of the wage labor and factory setting. There was some who did get rich, although it wasn’t from gold. Levi Strauss, with the help of Jacob Davis, was able to make the Levi’s Jeans we all know today because the men had difficulty with their jeans tearing apart too often.

Henry Wells and William P. Fargo had worked together as expressmen and later as president and secretary. Wells had gone to help others with the saving of their gold and intended to stay for three months but left after three weeks. Wells and Fargo realized people were moving to places with new opportunities and they had proposed to American Express that they should expand to follow where their customers would go. American Express rejected the idea, so Wells and Fargo left to create their own separate joint-stock company. Thus, leading to the Wells Fargo bank, we all know and, some, bank with today.

The market revolution had other impacts, such as slavery, social reform, and indigenous rights. However, the idea of wage labor and slight advancements in industrialization helped make a name for it. It helped with travelling and impacted the idea of what the American Dream should be. It kickstarted Manifest Destiny and the idea of going west. It even helped influence the ideas of the Wild West in movies and theme park rides.

The Market Revolution had a great start before slowly dying down because of the Civil war and then the Industrial Revolution but it left a lasting impact on many things we know today. It created many things that we know about today, such as the telegraph and steamboat as mentioned. It made stars that we still discuss such as Billy the Kid and Levi Strauss, although the latter is mainly known for his jeans. It created an influence on many of the things we use today. It was the start of the later revolutions to come. 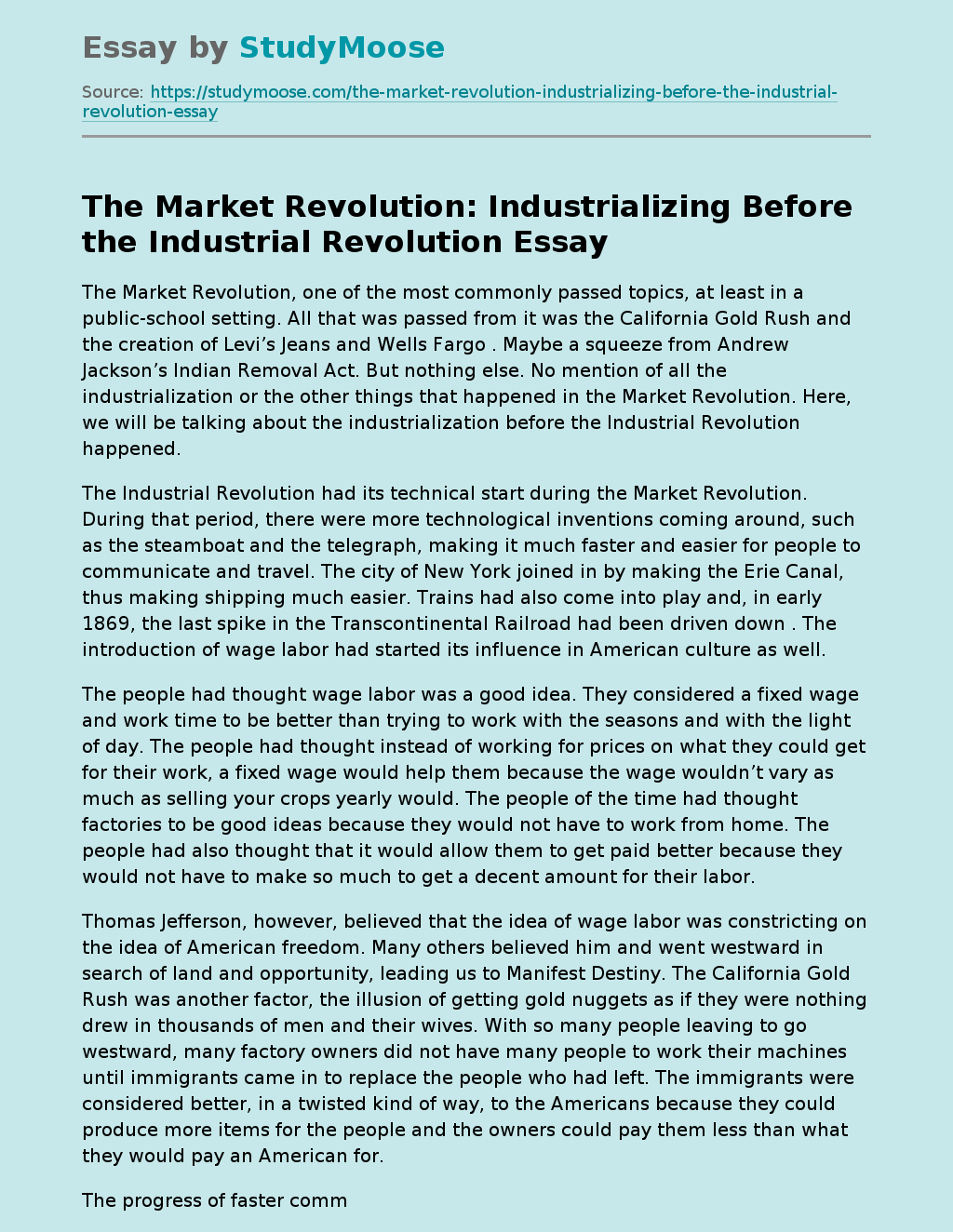