In the poem “The Love Song of J. Alfred Prufrock” by T. S. Eliot, the main character, J. Alfred Prufrock is seen as an anti-hero. His character and identity comes through strongly in the poem as a shy and introverted man who is socially inept, extremely self conscious, lacking in self confidence and wallowing in self-pity, yet desiring for people to notice him. The composer shows this through his use of allusions, powerful imagery to create vignettes of Prufrock’s life and the form of the poem as a disorderly train of thought, implying rather than telling.

Don't use plagiarized sources. Get your custom essay on
“ “The Love Song of J Alfred Prufrock” by T.S. Eliot: Main Character ”
Get custom paper
NEW! smart matching with writer

Throughout the poem, T.S. Eliot uses many allusions in order to illustrate Prufrock’s character and identity. The first such allusion is to the biblical character John the Baptist in lines 83-83; “Though I have seen my head (grown slightly bald) brought in upon a platter, I am no prophet – and here’s no great matter.” This allusion refers to the fact that John the Baptist was executed by Salome and brought to her on a platter and that Prufrock sees himself in a same position; as a sacrifice to women.

This reflects the fact that he is self conscious and cautious when it comes to relationships.

Another allusion to a biblical character was to Lazarus, who, like the character in the epigraph at the beginning of the poem, went to hell, but came back to life and talked about it. This allusion, like the epigraph, is parallel to the poem. Prufrock sees himself as being in hell; because of his lack of social ability, and like the person in the epigraph, wants to talk about his experiences because he feels that he will never get out of it.

T.S. Eliot uses “I” and “you” to show the two sides to Prufrock; his outer side as the conservative gentleman which is how the rest of the world perceives him, and his inner side, the socially inept and shy being he sees himself as, and because he is afraid to air his feelings to anyone, he goes through it in his own mind. This again shows his introverted nature and insecurities about life.

T.S. Eliot also uses allusions to Hamlet. Prufrock uses Hamlet as an example of what he is not. Hamlet was a tragic hero, a man who was the centre of attention and died in a tragic and heroic way. Prufrock sees himself as “an attendant lord” in a supporting role rather than a main role, and incapable of doing anything heroic. All three of these allusions show Prufrock’s self perception; as a victim of others and seeing himself as a sacrifice, self pitying because he could never be great and in hell because of his inadequacies.

Throughout the poem, powerful imagery is used to create scenes that reflect upon the identity of Prufrock. In the third stanza, the fog is personified as a cat; giving out a sense of laziness and eerie tranquility. This personification shows Prufrock’s reluctance at socialising as the cat is settled down and not moving. The repetition of the lines “In the room the women come and go, talking of Michelangelo” paints an image of cultured women who are obviously in Prufrock’s circle, yet through this line, Prufrock sees them as distant beings that he cannot associate with. The line creates distance between Prufrock and the world around him, furthering his sense of isolation.

In lines 73-74, T.S. Eliot uses the image of a crab to describe how Prufrock feels about himself. Prufrock believes that he is like a crab, scuttling across floors, this shows that Prufrock feels as if he is going sideways like a crab and not making any forward progress. Lines 124-125 Eliot makes a reference to mermaids from Greek mythology. The mermaids are supposed to sing and lure sailors into the sea, however, Prufrock says that “I do not thing that they will sing to me”, he sees himself as so isolated that even the mermaids will ignore him. These uses of imagery shows responders Prufrock’s opinion of himself as someone that lacks in confidence and sees himself as a failure.

The poem is written as a stream of consciousness. It is written in the way that Prufrock would think and address both sides of him, thus it is disorderly and fragmented. The composer chooses to show the responder what he is thinking rather than tell responders exactly what he is thinking. There are many references to everyday things such as coffee spoons; “I measured my life with coffee spoons” and to the way Prufrock questions himself as to what to wear and eat; “Shall I part my hair behind…eat a peach…wear white flannel trousers…walk upon the beach?” These references show that Prufrock was a careful and conservative person but also very indecisive. He cared for trivial matters as such and is afraid of facing and questioning anything deeper because he knows his inadequacies, yet he still chooses how do dress and what to do carefully because he yearns for companionship and for people to notice him.

The composer of this poem, T.S. Eliot uses effective allusions to biblical and Shakespearean characters, powerful and continuous imagery and the poem as a train of thought to show the responders the real character and identity of J. Alfred Prufrock. Such techniques enable responders to see Prufrock as a man who is shy, introverted and self-pitying but yearning for himself to change and for people to notice him. 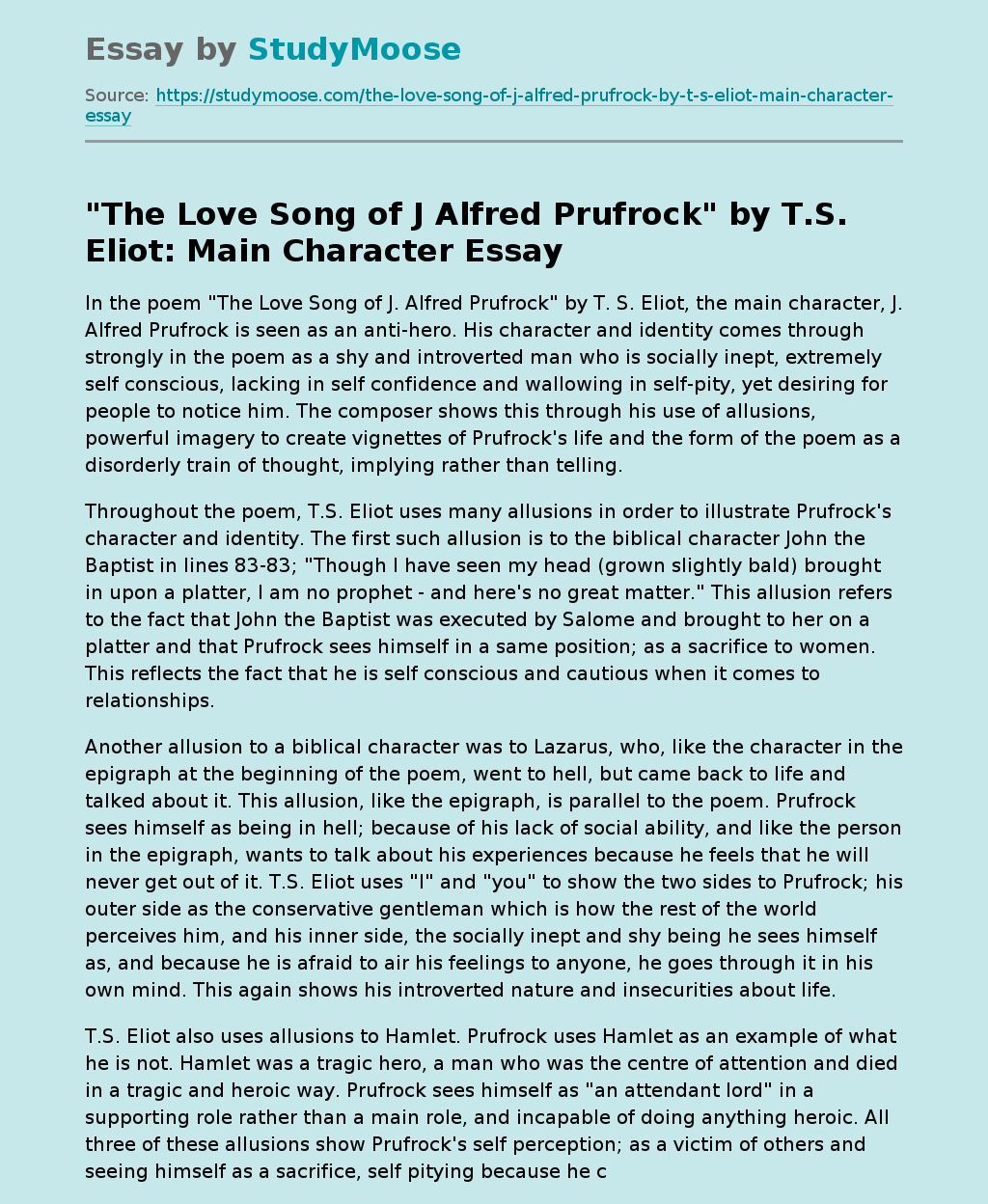