Analysis of The Love Song of J. Alfred Prufrock

Modernist Disillusionment in “The Love Song of J. Alfred Prufrock”

Unlike the romantic period that preceded it, the modernist literary movement reflected the feelings of a Lost Generation affected by industrialization and war trauma. As such, modernist literature often employs cynical or detached worldviews in angsty tones. The most famous writer of the movement, T.S Eliot, explored modernist themes of disillusionment through poetry. One of his poems,”The Love Song of J. Alfred Prufrock,” focuses on the theme of indecisiveness as a symptom of modernization in society.

Don't use plagiarized sources. Get your custom essay on
“ Analysis of The Love Song of J. Alfred Prufrock ”
Get custom paper
NEW! smart matching with writer

T.S Eliot’s “Love Song of J. Alfred Prufrock” is representative of the modernist literary canon through its exploration of the speaker’s personal feelings of anxiety and stagnation.

The repetition of questions and refrains in “The Lovesong of J. Alfred Prufrock” is used to express the speaker’s self-doubt and insecurity in a modernized, changing society. The poem primarily focuses on the speaker’s inability to talk to women, and how this relates to his fragile self-esteem as a whole.

Throughout the poem, the speaker repeats,”In the room the women come and go Talking of Michelangelo” (lines 13-14). This repeated observation of the women coming and going serves as a disruption to the speaker’s hypothetical dialogue with the woman he loves. He is unable to approach women because they intimidate him, especially in a new society where women are more educated and independent. The speaker also uses repetition by questioning himself ,”How should I presume?” (line 54). The question follows his memories of past rejections, wavering his resolve to pursue a woman romantically.

He is so paralyzed by his insecurity that he cannot even hold a conversation. This repetition is significant because it shows the speaker questioning his place in society, a common theme in modernist writing.

Eliot’s poem also incorporates multiple allusions to classic literary works, which are indicative of modernist skepticism of tradition. The references come from varied texts, including the Bible, Dante, Chaucer, and Greek philosophers, but Eliot especially focuses on Shakespeare. In one stanza, the speaker laments “No! I am not Prince Hamlet, nor was meant to be; Am an attendant lord, one that will do To swell a progress, start a scene or two” (lines 111-113). Here, the speaker feels a lack of personal agency, and only sees himself as an extension of others; he will only ever be in a supporting role for those who lead.Â J. Alfred Prufrock will never lead a progress like Chaucer, or woo a coy mistress like Marvell, just like he will never be the Hamlet or Lazarus he wishes he was. He is too scared to even try. Classical allusions like this are a signature of the modernist writing, where the traditional is used as a framework for contemplating the contemporary. These allusions are meant to show the speaker’s weakness, of what he can never attain.They are not used for glorifying the past, but for questioning the present.

In the poem, the speaker’s fear of inadequacy with women is connected to his larger fear of aging and mortality, and shows his existential crisis. When trying to gather the courage to pursue his romantic interest, the speaker resigns “I am no prophet – and here’s no great matter; I have seen the moment of my greatness flicker, And I have seen the eternal Footman hold my coat, and snicker, And in short, I was afraid” (lines 83-86). The speaker sees his social awkwardness as more than just situational; it is the story of his life, the only thing that defines his character. In every small failed interaction, he feels that his life has no importance, and that any instance of success is fleeting. He imagines Death, the “eternal Footman,” mocking him, just as he imagines women mocking him. Through this imagery, the speaker imagines his failure to win over the woman he loves as the literal death of him. By connecting romantic insecurity with existential insecurity, T.S. Eliot explores both the small- and large-scale implications of modernist thought.

Modernist literature differed from previous literary movements in its exploration of the internal mind, rather than the external world. Although deeply affected by external societal issues (industrialization, imperialism, war), modernist style primarily focuses on personal psyche. Modernist literary works often take the form of stream-of-consciousness, or in the case of “The Love Song of J. Alfred Prufrock,” dramatic monologue, rarely with any input of interpersonal dialogue. By turning the narrative inward, modernism sought to expose how the world at large can impact the individual body and mind. “The Love Song of J. Alfred Prufrock” remains a primary example of modernism because of its ability to make the reader connect so personally with the speaker’s internal conflicts, and consequently understand the external conflicts of the early 20th century.

Analysis of The Love Song of J. Alfred Prufrock. (2019, Aug 19). Retrieved from https://studymoose.com/analysis-of-the-love-song-of-j-alfred-prufrock-essay 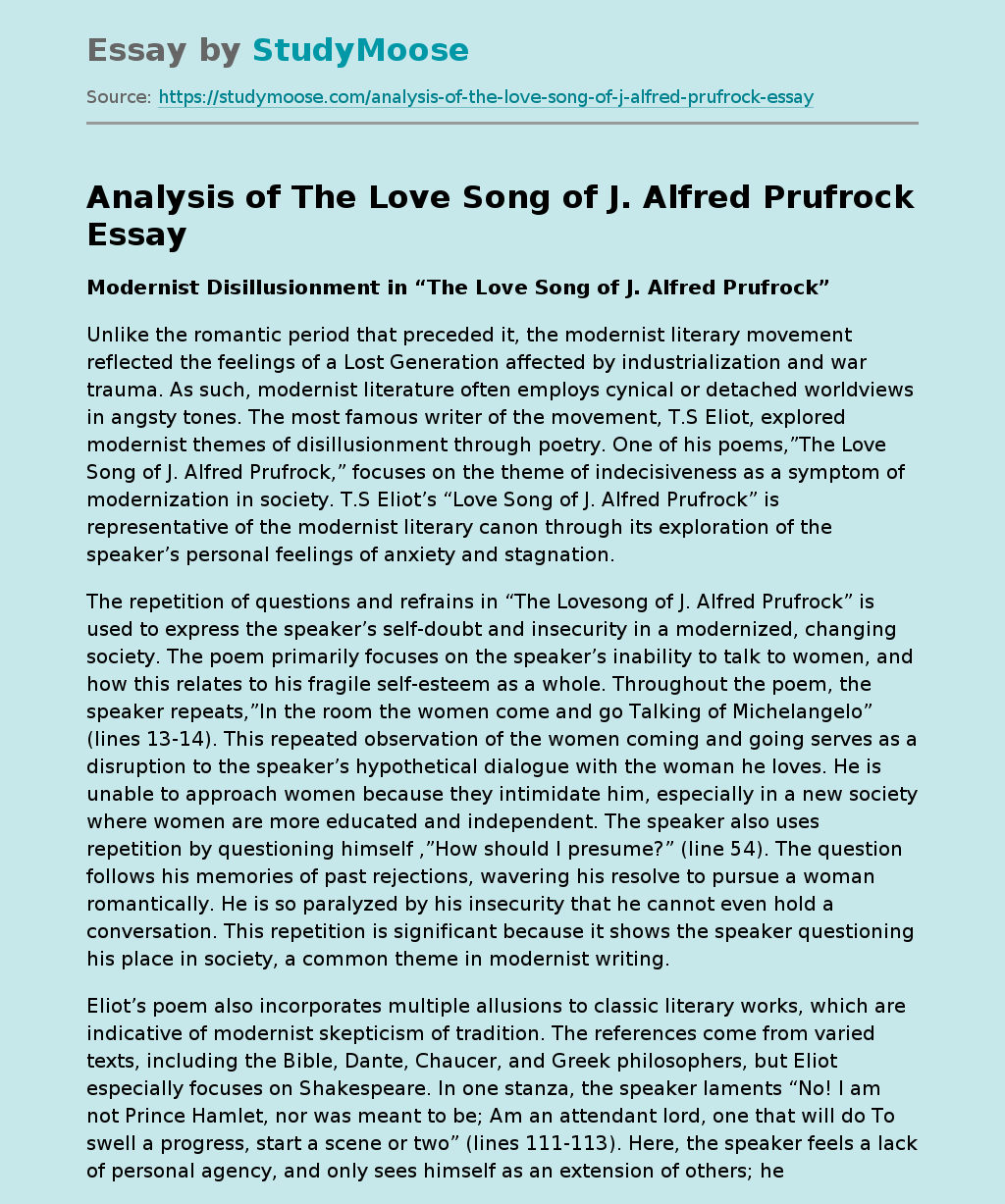