The Oxford English Dictionary defines Modernism as a tendency or movement towards modifying traditional beliefs and doctrines in accordance with modern ideas and scholarship (OED). This movement began after the start of the 20th century and was catapulted into existence by WWI. Where literary Modernism had been previously looked down upon, by the end of the war, the idea was more popularly explored (The Literature Network). While there are many characteristics of literary modernism, there are three outstanding ones that easily define modernism.

Don't use plagiarized sources. Get your custom essay on
“ Modernism: The Love Song of J. Alfred Prufrock  ”
Get custom paper
NEW! smart matching with writer

Those characteristics are fragmentation, psychological realism, and allusions. T.S. Eliot’s “The Love Song of J. Alfred Prufrock” serves as the perfect personification of the definition of modernism because it embodies each of these characteristics.

WWI wrecked countries, governments, as well as artistic ideas, reinforcing the fragmentary realities found in everyday life. Fragmentation is a literary device, used to depict or convey those fragmentary realities, in which literature is broken down. This device also leads to the breaking down of plots, characters, themes, images and the narrative forms (Farley).

Proficient in: The lovesong of j alfred prufrock

Fragmentation can be observed in many instances throughout “The Love Song of J. Alfred Prufrock”. Fragmentation of plot also described as the movie camera technique where one scene is cut, and the plot abruptly jumps to a new scene is observed immediately within the first four stanzas:

When the evening is spread out against the sky

And sawdust restaurants with oyster-shells:

To lead you to and overwhelming question…

Let us go and make out visit.

In the room the women come and go

The yellow fog that rubs it’s back upon the window-panes. (Eliot lines 1-15)

The first stanza begins with a walk through the streets, jumps to Prufrock’s internalized thoughts of an “overwhelming question” in the second stanza, then to a room where “women come and go” in the third stanza, and then to yellow fog in the fourth stanza. Prufrock fragmentizes the women at this dinner party “And I have known the eyes already, known them all- / The eyes that fix you in a formulated phrase” (55-56), he repeats this when he says, “And I have known the arms already, known them all- / Arms that are braceleted and white and bare” (62-64). Fragmentation of theme is expressed when Prufrock says, “And when I am formulated, sprawling on a pin,” (57) implying that he feels he will be dissected if he were to speak to a potential companion. Fragmentation is also exhibited for the theme of being scrutinized when Prufrock states, “Though I have seen my head (grown slightly bald) brought in upon a platter” (82). Eliot portrays Prufrock as an all-around fragmented fellow who just can’t seem to get out of his head. This leads to the next characteristic, psychological realism.

Psychological realism in modernism refers to the way in which the work is composed. Eliot stated in one of his essays, that a poet should not only look into one’s heart, as traditionally taught, but other more physical aspects of the body to form a work (Strandberg). Psychological realism plays hand in hand with the ethos of modernism, beginning simply with the character’s name, J. Alfred Prufrock. This name suggests that he is a modern man. Stream of consciousness is the writing style that best suits psychological realism. When considering the writing style, stream of consciousness, one can realize that the flow of the poem is solely Prufrock’s thought process in all its fluidity. Prufrock can be observed going back and forth with his conscious self between what is real, what he wishes to be real, or what he fears will be real if he were to take action:

And indeed there will be time

Time to turn back and descend the stair,

With a bald spot in the middle of my hair-

(They will say: ‘How his hair is growing thin!’)

My morning coat, my collar mounting firmly to the chin,

My necktie rich and modest, but asserted by a simple pin-

(They will say: ‘But how his arms and legs are thin!’)

In a minute there is time

For decisions and revisions which a minute will reverse. (Eliot Lines 37-49)

Prufrock is seen here, internally, going back and forth with the ideal of speaking to a woman, in fear that she will notice his thinning hair and frame. He then fears that he will be boring, and begins to wallow in self-pity, by saying:

Shall I say, I have gone at dusk through narrow streets

And watched the smoke that rises from the pipes

Of lonely men in shirt -sleeves, leaning out of windows?…

I should have been a pair of ragged claws

Scuttling across the floors of silent seas. (70-74)

The Poem is finalized in a back and forth between Prufrock, “the realist” and his psyche about what will he do with is lonely life since he was too afraid to take action. Prufrock begins with, “I shall war white flannel trousers, and walk upon the beach” (123). Prufrock’s psyche chimes in with, “I have heard the mermaids singing, each to each” (124). Prufrock kills that fantasy with, “I do not think that they will sing to me” (125). Prufrock’s psyche makes a final attempt at his fantasy world with:

“I have seen them riding seaward on the waves

Combing the white hair of the waves blown back

When the wind blows the water white and black.

We have lingered in the chambers of the sea

Prufrock then nails the coffin shut when he finishes with, “Till human voices wake us, and we drown” (131). Prufrock proves to be a complicated man. It is hard to depict what he wants for himself. Does he want companionship? Or does he want to live in peaceful silence by the shore? Something is missing and Eliot, a true modernist, knows the recipe. He knows he must visit the literature of old to convey the overall message.

“No poet, no artist of any art, has his complete meaning alone. His significance, his appreciation is the appreciation of his relation to the dead poets and artists. You cannot value him alone; you must set him, for contrast and comparison, among the dead.” (Eliot I4) Allusion is this quote personified. It is the brief in-direct reference to a person, place, thing, or idea of historical, cultural, literacy, or political significance (Literary Devices). The use of allusions enables artists, writers and poets the simplicity of complex ideas and emotions. Eliot took advantage of this throughout his experimental formed works. In “The Love Song of J. Alfred Prufrock”, Eliot opened with an allusion of Dante’s Inferno, “If I thought that my reply would be to one who would ever return to the world, this flame would stay without further movement; but since none has ever returned alive from the depth, If what I hear is true, I answer you without fear of infamy” (Norton footnote page 830). This allusion contributes to the theme of loneliness, isolation, and the inability to express one’s self. The speaker, Guido da Montefeltro can be directly compared to Prufrock, who will grow old and lonely because he is unable to express himself. Another instance of allusion can be seen when Prufrock states:

But though I have wept and fasted, wept and prayed,

Though I have seen my head (grown slightly bald) brought in upon a platter,

I am no prophet – and here’s no great matter;

I have seen the moment of my greatness flicker,

And I have seen the eternal Footman hold my coat, and snicker,

Modernism can be displayed across a wide variety of characteristics, but there are three defining characteristics. T. S. Eliot’s “The Love Song of J. Alfred Prufrock” embodies each of those characteristics. One can easily observe fragmentation in the poem’s plot, theme, and character. Psychological realism is exhibited by Eliot’s use of stream of consciousness writing style. Lastly, allusions are distributed throughout the poem allowing the audience a more robust understanding of Prufrock. In conclusion, the facts are as simple as a math problem. “The Love Song of J. Alfred Prufrock” is Modernism. 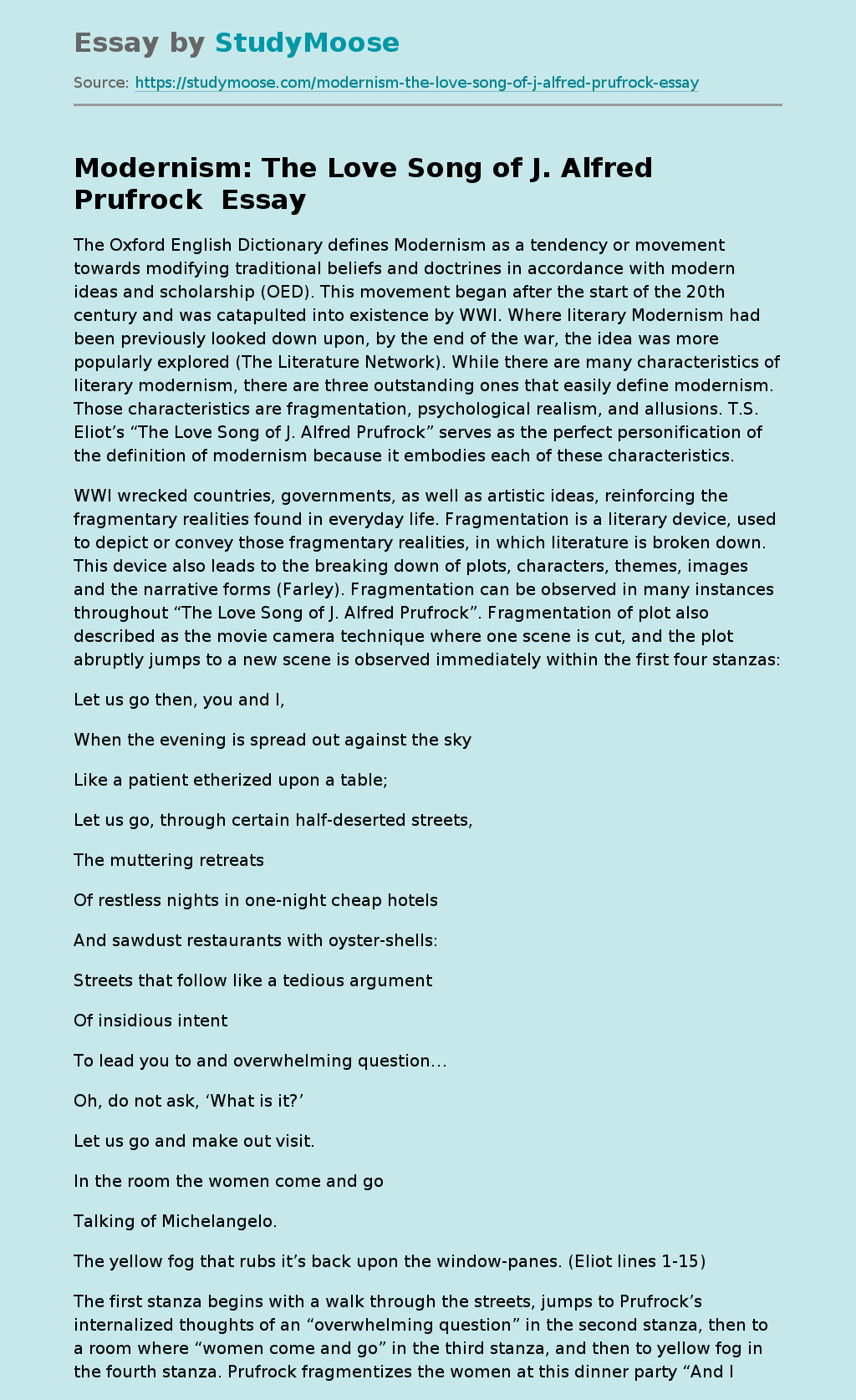