Postmodernism began appearing in a variety of artistic fields in the 1960s and 1970s, although it was most dramatically visible in the field of architecture, where it was adopted to describe the new forms of contemporary buildings, which returned to ornamentation, quotation of tradition, and the resurrection of past styles that a more purist modernist architecture had rejected. The rapid dissemination of postmodern discourse and forms in architecture helped to promote it in other aesthetic fields, thus providing concrete substance to the postmodern turn.

Indeed, people live in houses, neighborhoods, and social environments, and so architecture is nothing less than the mode of construction of everyday life. Thus, shifts in how architecture is conceived and constructed inevitably produce mutations in the very structure and texture of lived experience and the social environment. The postmodern turn in architecture involves a renunciation of modernist conceptions of stylistic purity, aesthetic elitism, rationalism, and universally based humanist and utopian political programs to beget new humankind through architectural design.

Against these principles, postmodernists like Robert Venturi, Philip Johnson, Frampton, and Michael Graves renounced the abstract and a historical formalism of the International Style, embraced an electric mixture of historical styles pursued an approach that respects both popular and professional tastes, and abandoned the utopian aspirations of modernism in favor of more modest goals.

Although advocates of the postmodern like to champion it as a break from the modern, there are very few postmodern elements that are completely new or innovative.

While postmodern discourse renounces originality and the celebration of novelty and innovation characteristic of modernism, it also continues the experimentalism of modernism and the avant-garde. Like these movements, it is committed to formalism and the avant-garde, however, postmodernism declares both the death of the author and of the work, replacing the former with the decentered self or bricoleur and the latter with the text.

Crucially, postmodern writers implode oppositions between high and low art, fantasy and reality, fiction and fact. Spurning originality, postmodern writers draw on past form, which are ironically quoted and eclectically combined. Instead of deep content, grant themes, and moral lessons, ludic postmodernists like Barth Barthelme are primarily concerned with the form and play of language and adopt sportive, ironic, self-reflective, metafictional techniques that flaunt artifice and emphasize the act of writing over the written word.

Some of the stylistic techniques of postmodern literature were defining features of modernism itself, motivated by its revolt against bourgeois realism leading many critics to see postmodern literature as continuous with modernism rather than constituting a radical break or rupture. It is often argued that whereas the lines between the modern and the post modern are hard to draw in literature, they are particular clear in architecture.

But in fact, the easy dichotomization between modern and postmodern architecture is arrived at only by equating modern architecture with the glass boxes of the International Style, which is just one vision of architectural modernism, albeit one that dominated from the 1920s through the 1950s. It is typically ignored, however, that there were a profusion of modern styles, that there was considerable conflict among them, and that many architecture of the International Style themselves developed different styles, some similar to the postmodern forms commonly opposed to it.

The architectural styles of the modern era include renaissance, mannerism, baroque, rococo and neo-classicism, expressionism , art nouveau, Americann industrial style, as in the skyscrapers of louis Sullivan, and the organic regionalism of Frank Lloyd Wright. Architectural modernism, however, is said in many standard postmodern accounts to begin with the genesis of the International Style, which appeared in the 1920s, was systematized by the early 1930s, and became dominant throughout the world by the 1950s. 8) Our argument in this paper, however, is that the modern architecture constructed by the postmodern polemics a reductive construct that collapses a great variety of modernist style into a unitary category of the International Style, thus obscuring important differences. The postmodern turn in architecture is often celebrated and legitimated by a spurious conception of modern architecture that covers over its complexity, diversity, and richness, identifying it tout court with the high modernism of the International Style.

We will argue for an architecture that draws upon both modern and postmodern style to develop a mode that serves human needs and that produces a more livable and sustainable environment. The International Style modernism is largely the product of the Bauhaus School founded in Germany in 1919 when Walter Gropers was appointed director of two schools of Arts and Crafts in Saxe-Weimar which he amalgamated, changing the school’s name to Bauhaus, that is, house of building.

They were immediately embraced in the United States as architecture icons. The International Style is equated with architectural modernism because, like other modernist movements in the arts, it sought to make clean sweep of the past, to be modern, to use new styles, materials, and technologies, and to advance new ideas. In the words of Gropius: “A breach has been made with the past, which allows us to envisage new aspect of architecture corresponding to the technical civilization of the age in which we live; the morphology of dead styles has been destroyed; and we are returning to honesty of thought and feeling”(1925:19).

The references to honesty is a critical attack on art noubeau, the prevailing aesthetic style that assaulted 19th century eclecticism, neoclassicism above all, seeking a new honesty through imitation of natural forms such as trees and clouds, which it claimed to be the most valid sources of inspiration. Against art nouve, the International Style asserted a superior honesty in the imitation of the geometric forms of the modern machine age and sought to replace nature with man-made environments, or at least to integrate nature into a massive new technoscape of dazzling proportions

Modern architects sought a new, austere style that simplicity, and purity of form, paring down line and space to their bare essentials. Whereas historicist values and a plurality of historical styles and unique architectural personalities, such as Antonio Gaudi, flourished before the Bauhaus and would be recaptured afterwards in the movements leading toward postmodernism, the architects of the International Style intended to reduce this eclecticism and plurality to a single new style that they sought to make dominant throughout the world.

The prototype for the new International Style was Gropius’s design for the Bauhaus compound built in Dessau, Germany, in 1925-1936. The site is made up of a series of rectangular buildings joined together at perpendicular angels. In typical International Style, the design is uniform, geometrically precise, devoid of ornamental detail, and completely standardized, resembling a warehouse or prison yard. This minimalist style was duplicated with equally uninspiring results, by Mies in his buildings at the Illinois Institute of Technology.

Except for futurism, no other modern art movement has been so conditioned by technological ideology and the modern mechanist worldview as International Style architecture. But the standard postmodern narrative occludes the variety and diversity of architectural modernism. Certainly, not all architecture from the late 1920s to the 1950s had the look of the International Style. Not all modern architects were strict functionalists, and many sought aesthetic inspiration in machines and abstract shapes.

The most striking exceptions to the International Style were the inventive modernist constructions of Le Corbusier and poetic works. On the other hand, high modernism in architecture fit perfectly with corporate capitalism and provided a useful ideology for its legitimation. The demand to reconstructure the environment, to destroy all obstacles in the path of modernization, was a perfect ideology for a relentless capitalist development. Small wonder that the movers and shakes of corporate capitalism were taken with the international Style.

This paper presents a comparison between postmodern architecture and the International Style modernism. It also presents a groundbreaking analysis of the emergence of a postmodern paradigm in the arts, science, politics, and theory. From postmodern theory, the much-acclaimed introduction to key postmodern thinkers, the postmodern turn ranges over diverse intellectual and artistic terrain from architecture, painting, literature and physical biological sciences. 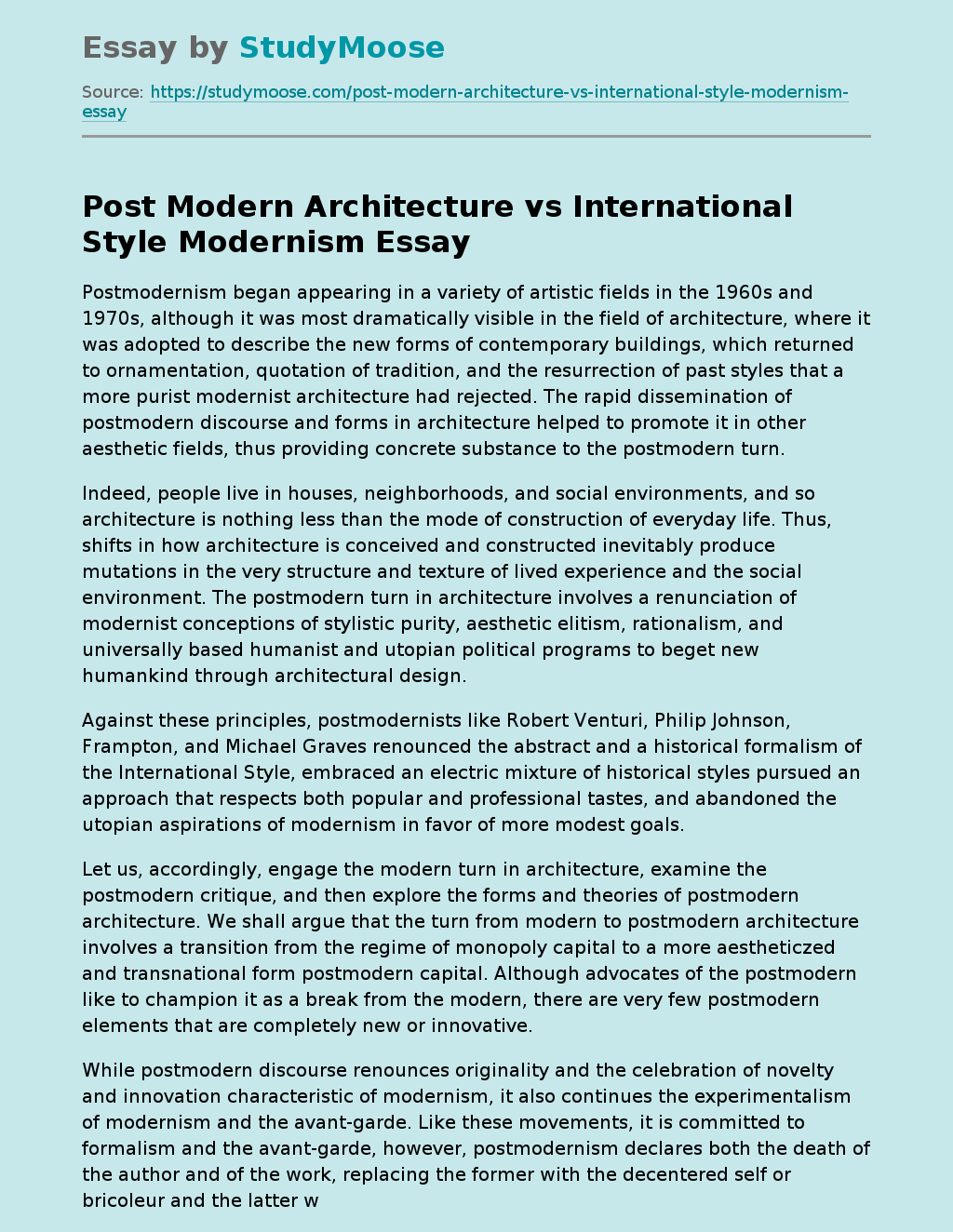