Modernism as an Impact in Society

Modernism is a modernist movements in the art, its set of cultural tendencies and associated cultural movements, originally arising from wide-scale and far-reaching changes to Western society in the late 19th and early 20th centuries. Modernism also reject the idea of enlightenment thinking as a well the idea of god as a powerful person. Modernism movement is focus on traditional activities such as; art, architecture, the religious faith, social organization and daily life, those things were become obsolete in the economic system, social and political implication that were presented the fully industrialized world.

Don't use plagiarized sources. Get your custom essay on
“ Modernism as an Impact in Society ”
Get custom paper
NEW! smart matching with writer

An example of modernism was “Sophistication” by Sherwood Anderson in (1876-1941). “Sophistication” has several controversial ideas that suggest negative consequences on society; insolation, and individuality of people. Tendencies about modernism presented in “sophistication” could be cause impact in depression. Depression is a mental state or chronic mental disorder characterized by feelings of sadness, loneliness, despair, low self-esteem, and self-reproach (Leonard). Modernism considers that exist a barrier that divides past from the present.

It is an impassible barrier in the imagination of modernity. It? s cause the experience of disillusion which make it possible to capture the innocence of early days. Modernism suggest that all people have disillusion for any reason, this disillusion helps people to overcome the problem and also sees the world as an option to improve their live. Besides an idea of modernism is the disillusion of people. Sherwood Anderson in his story “Sophistication” suggest that: The mood that had taken possession of him was a thing known to men and unknown to boys.

He felt old and a little tired. Memories awoke in him. To his mind his new sense of maturity set him apart, made of him a half-tragic figure. He wanted someone to understand the feeling that had taken possession of him after his mother’s death. (422) It means that George Willard is growing up into manhood but, he wants to have a person that can comprehend some feelings that had taken possession of him because he felt totally different in his new stage. On the other hand, James Leonard makes contrast about believes that Sherwood Anderson has with regard to puritanism.

He suggest that disillusion cause spiritual depression: “Almost any disappointment, disillusionment, failure, or collapse-of-hopes might cause us to tumble into an emotional slump” In this perspective, disillusion cause a spiritual depression in which people that are facing problems like adaptation into society. When Elizabeth, his mother, finally dies, George Willard is oddly unaffected at first. He decides that now he will definitely leave Winesburg. “Sitting with his mother’s corpse, he begins to think of kissing Helen White.

Having this thought while sitting next to his dead mother makes him feel guilty, and he begins to weep again. He leaves the room, still crying, overcome by a combination of fright and uncertainty. ” (Anderson) However George remember things such when his mother death for that reason he felt loneliness and maybe in some moments he was depressed for both reason; his mother and Helen White. Sherwood in his story “Sophistication” arguments: “The sadness of sophistication has come to the boy.

With a little gaps he sees himself as a merely a leaf blown by the wind through the streets of his villages”( p 423). That means that he has fair to confront the new world. He felt alone and his thoughts are that he is going to die uncertainly. Moreover, when people in society are facing situations that can affect their life like remembering of past, thing like this was difficult to overcome for them or accomplish some rules that society is show them such; aptitude related with sex, being part of fully industrialized world. Those thing can affect themselves.

Also, if they do not accomplish those rules, they are discriminate or they cannot be part of the world. In some moment they are called stranger person or rare. The ideologies Modernism presents in Sophistication cause several impact on society. Modernism has its own relation with individualism. Subsequently, they belief are not shared by the religion. Modernism belief that individualism has association with liberty. On the other hand, “Sophistication” presents a corrupt interest on money as a form of refuse to obtain materials things.

The point of view epitomized by Sherwood Anderson in his story “Sophistication” with an insignificant quotation: Helen arose and went into the house. At the door leading to a garden at the back she stopped and stood listening. Her mother began to talk. “There is no one here fit to associate with a girl of Helen’s breeding,” she said. Helen ran down a flight of stairs at the back of the house and into the garden. In the darkness she stopped and stood trembling. It seemed to her that the world was full of meaningless people saying words.

With this example Anderson in his history try to demonstrate what important are the material things for Helens mother, saying to instructor that do not exist a man that can be compere with the status of Helen White. However, Helen felt sad because she thinks that in the word there are people who say stupid things. But, the mother does not take into account Helen’s feelings because people who are materialist do not care about people who are around them. Moreover Helen was thinking in George when she went to fair with the instructor.

Besides, Anderson affirm that Helen’s thought was regard to George: Helen White was thinking of George Willard even as he wandered gloomily through the crowds thinking of her. She remembered the summer evening when they had walked together and wanted to walk with him again. She thought that the months she had spent in the city, the going to theaters and the seeing of great crowds wandering in lighted thoroughfares, had changed her profoundly. She wanted him to feel and be conscious of the change in her nature.

That means that Helen is thinking in her love and also. And she also was remembering things when they were in the city, those things she cannot forget because they were like phantasy for her. Also, Helen White wants that George about some changes in her nature, those changes have to be with her growing up into womanhood. However, religion disagree with this point of view that modernist present in “Sophistication”. Religion has some fundaments related with love as important pillar in humans being.

On the other hand, the religion criticizes the ambition for materials thing because God teach them in his bible that material things do not have anything to do with happiness. Reina Valera makes a contrast about belief of modernism: Make no store of wealth for yourselves on earth, where it may be turned to dust by worms and weather, and where thieves may come in by force and take it away, But make a store for yourselves in heaven, where it will not be turned to dust and where thieves do not come in to take it away: For where our wealth is, there will your heart be. (Matthew 6:19, 20, 21) God counsels to make our best things the joys and glories of the other world, those things not seen which are eternal, and to place our happiness in them. Furthermore, God tries to teach that if we die all materials things we are going to stay in this earth, for that reason materials things are not related with happiness.

To sum up, the vision of Sherwood Anderson as a modernism believer has about the connection that exist between past and present when children are suffering some changes when they are growing up how is present in “sophistication” Helen White was change her childhood into womanhood at the same time of George was change his childhood into manhood. But, it is also important to take into account that those changes could affect their life because some children want not to be part of adult and some moments those changes could be the first cause of depression.

After all, it is necessary to respect the perception that the religion has, it is in contrast of the ambition of material things or to get money. However, it is necessary to respect those beliefs that every person has about religion. Moreover Reina Valera teach us that material things do not have anything to do with happiness because God teach us that it is more important love because materials thing is going to stay in the earth when we die.

Modernism as an Impact in Society. (2016, Oct 19). Retrieved from https://studymoose.com/modernism-as-an-impact-in-society-essay 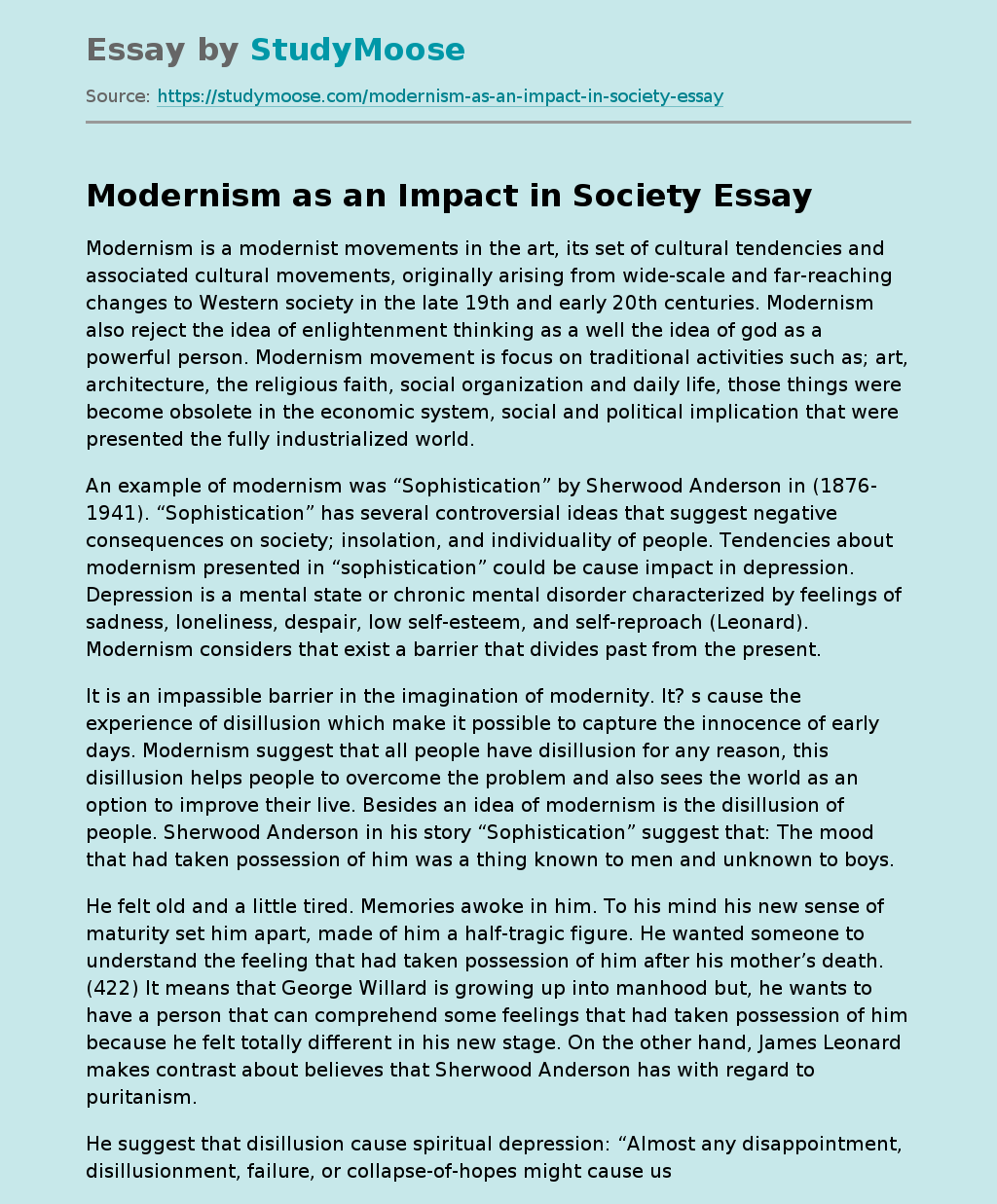