An Analysis on Alfred Hitchcock and His Film Psycho

In the “shower scene” in Alfred Hitchcock’s movie, the amount of blood that flowed can be considered in contemporary times as nothing short of artistry or a sense of tastefulness in the viewer’s understanding. However, during the 1960’s, the “shower scene” is considered unreasonable or gratuitous, giving the scene the impression that it depicts too much unsolicited violence.

For those who look upon the “shower scene” as one of Hitchcock’s attempt of revolutionizing films, the scene can be treated as one that reflects the perception of the time in which the film was conceived.

Don't use plagiarized sources. Get your custom essay on
“ An Analysis on Alfred Hitchcock and His Film Psycho ”
Get custom paper
NEW! smart matching with writer

Apparently, the “shower scene” amongst the number of hair-raising scenes in the film further reflects the 1960s social upheaval that grew in the west, including the United States. Another violent scene in the movie is the one that showed Detective Milton Arbogast being slashed to a bloody death after he was pushed off from the height of the stairs.

The murder of the private detective in the movie Psycho, as well as the “shower scene”, can be taken to mean as two of the social upheavals that burst in the 1960s American society, revolutionizing the way in which movie scenes are crafted especially the way in which they portray violence, sexuality, and language.

Hitchcock generally worked and directed movies that fall under the thriller genre by imprinting upon formulaic movies his famed idiosyncratic touches. The manner in which Hitchcock worked as a crucial part of the filmmaking process largely contributed in “propelling him to the status of an auteur”.

Hitchcock even “ordered and manipulated the shade of blonde he was looking for in Grace Kelly’s hair” in one of the films (Martin & Wikstrom, 2001, p. 20). What enabled Hitchcock to “cut in the camera” is his attitude of working out the details of the film in advance, which eventually corresponds to the unswervingly stumpy ratio of film really utilized in the finishing cut to the film shot during the entire shoot. Having worked out everything in advance, he worked quickly and economically. A minimal set of editing was the result of his working attitude, hence the term “cutting in the camera.

” The fact that Hitchcock planned every detail in advance oftentimes led to bore him during the actual shooting of the film. To fend off languor in the course of the actual filming progression, he would customarily commence labor on the storyboards for his coming film project (Martin & Wikstrom, 2001, p. 21). “When all the interesting film-makers—those who were referred to as “auteurs” by the Cahiers du Cinema in 1955, before the term was distorted—concealed themselves behind various characters in their movies.

Alfred Hitchcock achieved a real tour de force” that established his status further as an auteur (Ray, 2001, p. 38). Hitchcock’s most popular films include Vertigo, Psycho, Rear Window, and The Birds which reflected his story telling methods and skills which were renowned for their witty plots, intelligent dialogues and the fusion of mystery and murder. With this respect, Hitchcock’s name became commonly attributed to the thriller genre as he created revolutions in that aspect of filmmaking.

Part of the reason to this, apart from the fact that it was the genre he centrally focused on, is his skill which he exhibits during the course of the film which can be observed in his treatment of the subject in line with the shots he utilizes and on how he is able to fuse them altogether (Truffaut & Scott, 2003, p. 346). One illustration to this is shown in one of his famed screen moments. The terrifying shower scene in the film Psycho featured 70 unique shots in just a matter of 1 minute.

The numbers of shots were combined altogether in such a manner that one will find a difficult time seeking the distinction between the montage and the mise-en-scene (Nickens, 1995, p. 110). A considerable number of movies made by Hitchcock contained fleeting cameo appearances by the director himself such as a Hitchcock being seen for a brief period boarding a bus, standing in an apartment across the length of a courtyard, appearing in photographs in the scenes, or by simply crossing in front of an edifice.

This seemingly playful act eventually became labeled as one of the Hitchcock signatures in films. Further, Hitchcock himself would carry a musical instrument in one of the scenes in the film as a recurring theme (Martin & Wikstrom, 2001, p. 23). The fact that these varied elements are included in the movies of Hitchcock signifies the fact that Hitchcock had a very huge role in the filmmaking process and that this monumental role extends his personality right into the theme of the movie.

Since film producers have a significant trust on Hitchcock, he was able to freely include these elements either in a subtle or in an obvious manner. The constant inclusion of these personal elements in the many movies of Hitchcock eventually molded an image uniquely his own. Hence, it became inevitable that the movies highlighting these elements were immediately attributed to Hitchcock thereby creating the director-image of Hitchcock as an auteur (Sarris, 2002, p. 29).

Considering all of the characteristics of Hitchcock, his crucial role in the movies he created, the inclusion of the elements in the movies which reflect his personality and lifestyle as well as the role of the scholars in carefully assessing his impact of his personal touches in the movies, it can be said that Hitchcock indeed is an auteur in the strictest sense of the word. Although arguments can be raised against the role of the director as an auteur in the filming of the movies, it remains a fact that Hitchcock had an immense weight of participation prior to, during , and even after the filmmaking process.

Part of the arguments against it is the claim that several other factors must also be considered and the merit should not solely belong to the director. As with the case of the seemingly lesser roles in the movies, the collective efforts of all the participants excluding the participation of the director when combined altogether essentially posits a substantial bearing in the creation of the film. In conclusion, the factors which are attributed to the delegation of the status of an auteur to Hitchcock should not be looked upon as a means to ignore the relative importance of the role of the rest of the crew involved in film production.

Rather, the role of Hitchcock as an auteur should be noted as a form of a proper authority in guiding the direction of the film. On the other hand, the distinction between an auteur and the other roles in the film production should be taken as an informal relationship which defines the structure of the outcome of the movie. This is the point where Hitchcock himself leads the way not only as a director but also as the auteur. Not surprisingly, Alfred Hitchcock techniques are indeed innovative during his life where a considerable number of his films manifested his ingenuity in the film industry.

Especially in his film Psycho, Hitchcock’s style in directing the film is manifested through his fitting use of musical scores and backgrounds in the proper timing and scene. His approach in Psycho manifest the fact that Hitchcock is only one of the few who was able to reshape the film industry and contribute significantly to its quality and style.

An Analysis on Alfred Hitchcock and His Film Psycho. (2017, Apr 17). Retrieved from https://studymoose.com/an-analysis-on-alfred-hitchcock-and-his-film-psycho-essay 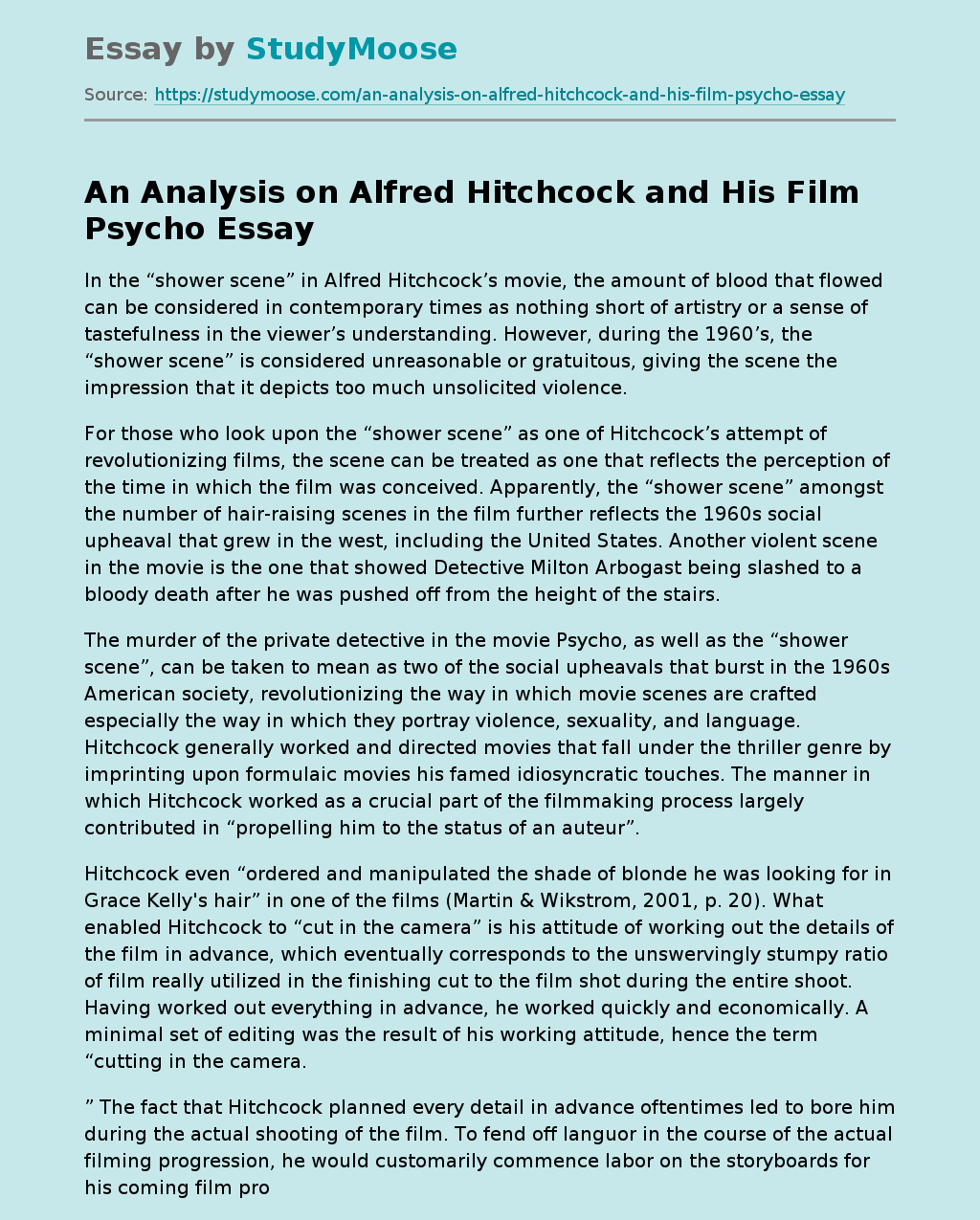