Nicely printed on the poster of this movie are the words: THE MASTER OF SUSPENSE WEAVES HIS GREATEST TALE. And true to these words, Alfred Hitchcock does not disappoint. North by Northwest (1959) is full of suspense and is one of the most entertaining flicks ever made. Although it is shockingly outclassed by his other classics, such as Rear Window and Vertigo, this movie is Hitchcock’s chef-d’oeuvre. It is rather sad that it does not get the recognition it deserves.

Don't use plagiarized sources. Get your custom essay on
“ Analysis of Alfred Hitchcock’s North by Northwest ”
Get custom paper
NEW! smart matching with writer

Hitchcock paired up with the debonair actor Cary Grant for their fourth installment and proved their collaboration is one of the best in film history. Their earlier collaborations include: To Catch a Thief (1955), Notorious (1946) and Suspicion (1941). He further sought the services of Oscar winning Eva Marie Saints and enlisted this movie to the femme fatale film genre, which further added flair to the already brilliant script.
North by Northwest Synopsis

Borrowing heavily from the spy era of the cold war, the main theme of the movie is mistaken identity.

Roger Thornhill (Carry Grant), the protagonist of the movie is a sophisticated and successful advertising executive with a weakness of pleasing women and submitting to his mother’s will. However, his life quickly transforms from dinner dates at cocktail bars to one of perilous adventures across the nation when he is mistaken for a spy known as George Kaplan. He is kidnapped from a bar by two thugs who take him to Mr. Townsend’s mansion.

Thornhill is both shocked and frightened by the whole ordeal, although he tries to conceal his feelings by being sarcastic.

Unable to get anything meaningful from him, Townsend (Vandamm) orders his men to execute him professionally. The plan is to intoxicate him, murder him and then stage it as an accident. The plan does not work as Thornhill escapes away with a car, despite being drunk. His narrative of being kidnapped is not believed by both the police and his mother. Things do not go well for Thornhill when “Mrs. Townsend” flips the script on him when she is interrogated about Thornhill’s alleged kidnapping.

Unable to convince his mother and the police, Thornhill decides to investigate everything by himself. He is caught snooping around Kaplan’s apartment by Philip Vandamm’s goons and subsequently chased to the United Nations building. While there, he is framed for the murder of the real Townsend. Now a fugitive of both the FBI and Vandamm’s crime syndicate, Thornhill flees to Chicago via a train. It is on this train trip that he meets the beautiful Eve Kendall (Eva Marie Saint). What transpires between the two is an aura of seduction that lands Thornhill into Kendall’s room to escape the police.

Later, he learns that Kendall is not who she says she is when she sets him up in an isolated bus stop to meet Kaplan. This leads to one of most intriguing and suspense filled scene in the whole movie. Thornhill is attacked by a crop duster plane in the middle of nowhere with nowhere to hide. As the movie builds up to the climax, we learn that Kendall is actually an undercover agent who has infiltrated Vandamm’s criminal organization. Agent George Kaplan does not exist. He is only a decoy to distract Vandamm from knowing the real traitor in the organization, as earlier revealed by the professor.

Vandamm however learns of her real identity. Unbeknownst to Kendall of her blown cover, she does not know she is being led into a trap by the mafia lord. It is up to Thornhill to save her. Although the movie has a cliché ending of a hero rescuing a damsel in distress and in the process winning her heart, Hitchcock does not delve much into the subject of romance. The movie quickly comes to a close after the two successfully escape the thugs at Mount Rushmore. The closing scene is between Thornhill and Kendall in an upper berth of a train. As is characteristic of Hitchcock, he leaves us in suspense about the new couple.

Fun Facts about the Movie

Most of the movie was filmed in the studio, except for a few real locations that Hitchcock preferred to shoot brief segments of. There was the United Nations building in New York, where the protagonist is secretly filmed with a hidden camera as he enters the building. The UN lobby was a remake. The other locations are the Grand Central Station also in New York and Mount Rushmore in South Dakota. Real shots are only done on the park’s exterior. The actors are actually crawling on a remake of the presidential faces.

Another exciting fact is about the film’s title. What does it really mean? It has no relation whatsoever with the theme of the movie. Just like the film itself, the title is shrouded in mystery that only Hitchcock and his peers know what is going on. There were three titles that were adopted at various stages of the script: Breathless, The Man on Lincoln’s Nose and In a Northwesterly Direction. These titles were however discarded by the director and he settled for the rather mystical North by Northwest.

The latter title however gives us a glimpse of what the current title means. It has to be a direction. He travels north by a means of transport referred to as northwest. Tracing the hero’s adventurous journey, we see that he moves from New York to Chicago and then he flies north by northwest airlines to Mount Rushmore in South Dakota. This is obviously a northwesterly route. This is the most probable explanation for Hitchcock’s classic flick.

Analysis of Alfred Hitchcock’s North by Northwest. (2018, May 08). Retrieved from https://studymoose.com/analysis-of-alfred-hitchcocks-north-by-northwest-essay 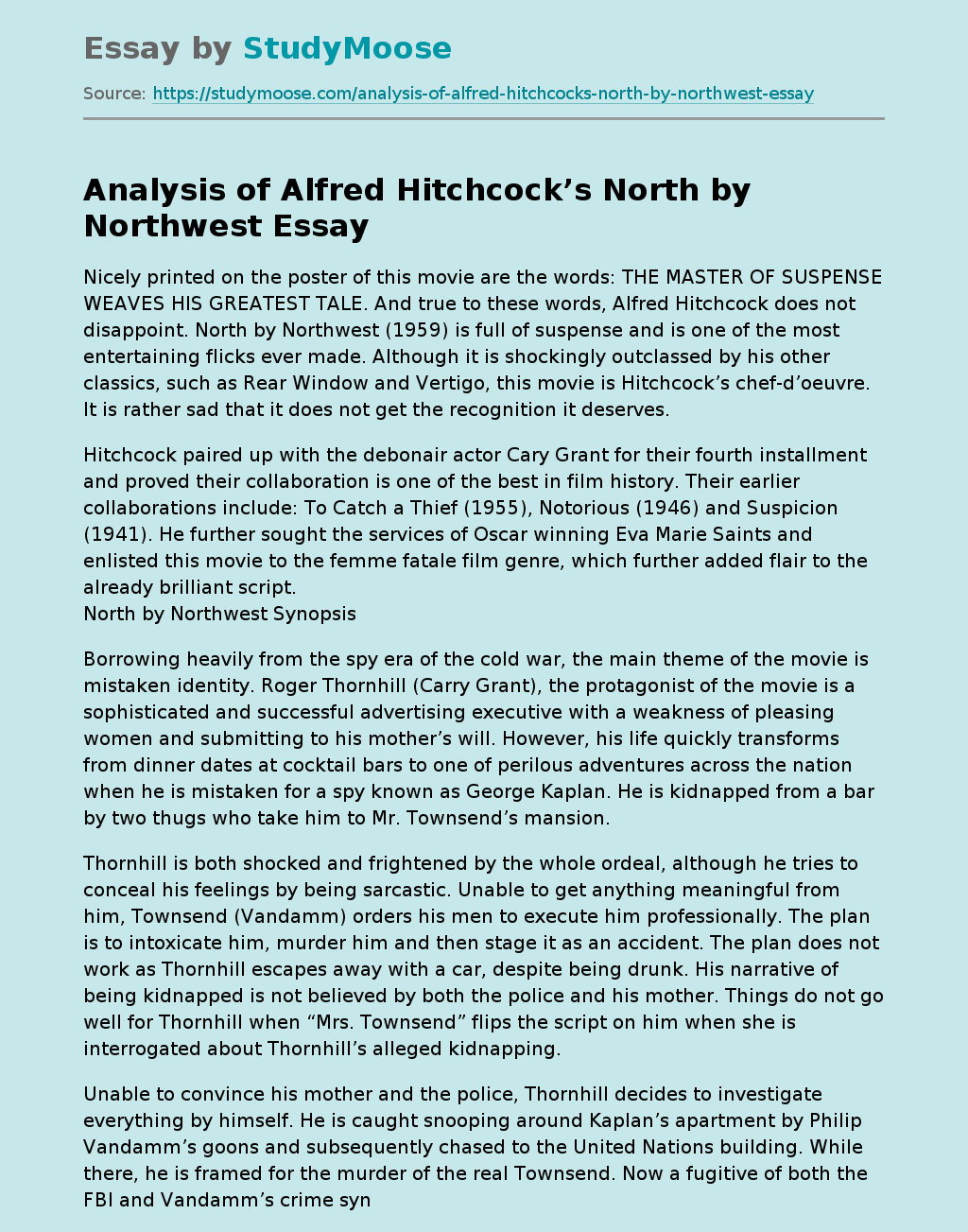