The Life Story of Igor Stravinsky

Igor Stravinsky was among the most influential and versatile composers of the last century. His overwhelming commitment to music and remarkable musical career, “…which spanned the convulsive final years of the Imperial Russia and the social ferment of 1960s America, served to establish Stravinsky not only as the most celebrated composer of his time, but also as one of the defining forces of twentieth-century culture” (Wenborn, 1999, p. 10). Born in 1882 to the family of Fyodor Stravinsky, a famous Russian actor and opera singer, Stravinsky grew up in the atmosphere of conservatism and discipline.

Don't use plagiarized sources. Get your custom essay on
“ The Life Story of Igor Stravinsky ”
Get custom paper
NEW! smart matching with writer

As his father was a member of Russian cultural elite and had close personal relationships with Turgenev, Mussorgsky, Rimsky-Korsakov and other talented artists of that epoch, the young Stravinsky and his siblings were surrounded with the music of the most progressive Russian composers, such as Borodin, Glinka, Mussorgsky and Dargomizhsky, since their early childhood. When he was 9, the young Stravinsky started his piano lessons followed by studying harmony, music theory and composition.

However, his enthusiasm for developing a career in music was somewhat frustrated by the parents who insisted on Stravinsky’s becoming a lawyer.

In 1901 he entered the University of St. Petersburg to study law. A year later, Stravinsky took an opportunity to present his compositions to Nikolay Rimsky-Korsakov, a leading Russian composer of those times, who lately became Stravinsky’s spiritual parent. Rimsky played an important role in musical development of Stravinsky, and till his death in 1908, he was influencing Stravinsky’s creative style. In 1907, inspired by the works of Rimsky, Stravinsky wrote First Symphony in E Flat Major which was dominated by nationalistic motifs.

Along with other compositions (such as Fireworks and The Faun and the Shepherdess), the Symphony attracted the attention of Sergei Diaghilev, a Russian ballet impresario who worked for the Ballets Russes in France. On his request, Stravinsky created his first ballets: The Firebird (1910), Petroushka (1911) and The Rite of Spring (1913). The Russian period in the career evolution of Stravinsky can be characterized by a tendency to use ritual personages, motifs and harmonic formulas of Russian folklore, blended with a lot of dissonances and irregular rhythms.

Those years were very important for the formation of musical aesthetics of Stravinsky, which can be defined by vivid imagination and various semantic elements, rhythmic freedom, abundance of variations and ostinati, etc. The next, neoclassic period started in the early 1920s, when Stravinsky moved to France. Together with his wife Ekaterina and their four children, Stravinsky settled down in Nice. He continued composing and traveling with the Ballets Russes, looking for new ideas and themes for his works. In this period, Stravinsky was under the influence of French impressionism of the eighteenth century.

In his masterpieces, the composer used to refer to various stylistic models: he mastered the styles of the European baroque (Oedipus Rex, 1927), the techniques of old polyphony (the Symphony of Psalms, 1930), and so on. During the 1930s, Stravinsky’s success as a composer was boosted by his increasing popularity as a brilliant pianist and conductor of his own compositions. In 1934 he became a citizen of France, and a year later he had a series of great performances in the United States crowned by a remarkable concert in the Metropolitan Opera in New York, where Stravinsky conducted his newly created ballet The Card Party.

The late 1930s were darkened for Stravinsky by the loss of his wife, mother and elder daughter who died of tuberculosis one after another. In 1939 he moved to the U. S. together with his mistress Vera de Bosset, a dancer at the Ballets Russes. Stravinsky’s compositions of the 1940s (including the Symphony in Three Movements (1945), the Ebony Concerto (1946) and other works) can be characterized by a great stylistic diversity. However, his ballet Orpheus completed in 1947 marked the composer’s return to neoclassical traditions.

The opera The Rake’s Progress (1951), created in collaboration with W. H. Auden and C. Kallman, is considered to be the apex of Stravinsky’s neoclassical period. The libretto was based on a series of engravings of William Hogarth. Musical context of the opera is based on classic harmonies and a wide palette of tone colors, enriched with surprising rhythmic changes and dissonances. The premiere of the opera took place at the famous La Venice in Italy, and in 1997 this opera was restaged by the Metropolitan Opera.

In the early 1950s, being under the influence of such artists as A. Schoenberg and R. Craft, Stravinsky embarked on using the techniques of Serialism in his compositions. During this final period of his career, the composer was experimenting with the twelve-tone methods (dodecaphony) developed by Schoenberg, as well as working on a great number of songs, cantatas and other small chamber works and pieces of vocal music. Many important compositions of this period are dominated by biblical motifs (Canticum Sacrum (1955), A Sermon, a Narrative, and a Prayer (1961), Abraham and Isaac (1963), etc. )

During the last decade of his life, Stravinsky continued performing and conducting his pieces in the most prestigious concert halls of the U. S. and Europe. He visited the Soviet Union and developed friendly relationships with Soviet leader Nikita Krushchev. Stravinsky was a devoted Orthodox Christian and a great father for his children. The composer died in 1971 and was buried on the cemetery of San Michele, next to the grave of his close friend, Sergei Diaghilev. For his achievements and musical innovations, in 1987 Stravinsky was granted the Grammy Award for Lifetime Achievement (posthumously).

Despite great stylistic contrasts, all the works of Stravinsky retain a certain distinctive identity rooted in his Russian origin and the tendency to use his trademark musical elements (such as ostinati, off-rhythms, etc. ) in the majority of his compositions. Stravinsky was a person of an inexhaustible enthusiasm and eagerness to explore new musical horizons and styles. He was a composer of a phenomenal talent and matchless creative originality, who “…revitalized the rhythms of European music and achieved entirely new sonorities and blends of orchestral colors” (Columbia Encyclopedia, 2007, p. 46141)

The Life Story of Igor Stravinsky. (2016, Sep 24). Retrieved from https://studymoose.com/the-life-story-of-igor-stravinsky-essay 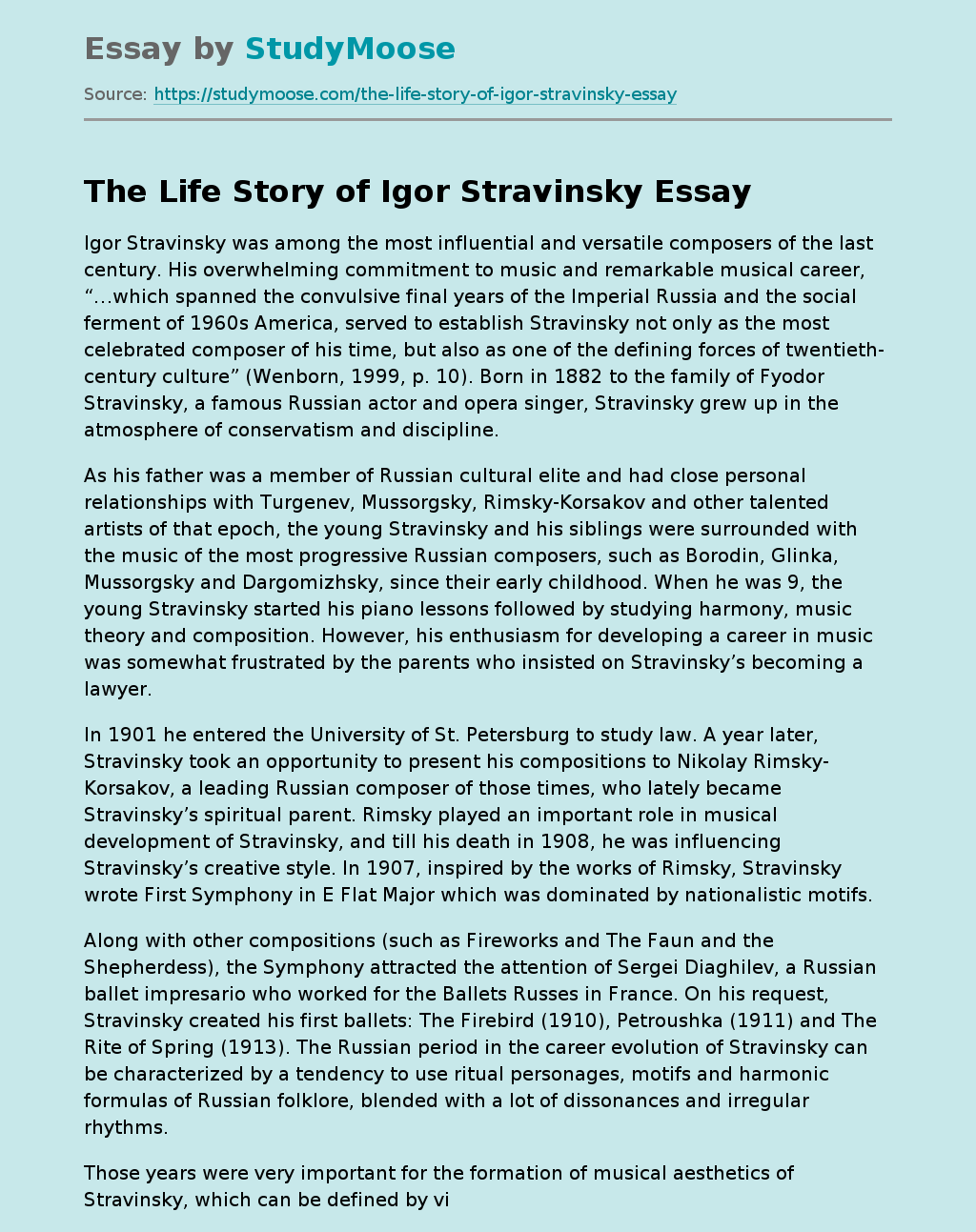