A Life Lesson in Keller’s The Story of My Life: Empowering Self-Efficacy

Keller’s The Story of My Life (1903) is a literary reading filled with abundant examples of struggle and perseverance which is worthy to be viewed as a lesson to promote Self- Efficacy. People’s strong sense of self efficacy is very beneficial in facing challenges even in the most difficult situation in every endeavor of life. This article aims to elaborate the events in The Story of My Life which describe the significant sources of Keller’s self-efficacy. The data were taken from Keller’s narration focusing on her thought, wishes, emotional feeling, and daily struggle which exhibit how Keller’s attempt to face every obstacle in her endeavor as a blind and deaf person.

Don't use plagiarized sources. Get your custom essay on
“ A Life Lesson in Keller’s The Story of My Life: Empowering Self-Efficacy ”
Get custom paper
NEW! smart matching with writer

The data were analyzed from the perspective of the psychoanalysis of literature with regards to Bandura’s four major concepts of Self Efficacy sources; mastery experience, vicarious experience, social persuasion, and affective state. The result reveals that Keller’s self- Efficacy contribute significantly to her success.

Human’s civilization is now in the era of Disruption 4.0. In this fourth industrial era all information and knowledge are easily accessed. However, the explosion of information and technology, and the demand for technical skill creates huge burden of work in workplace; huge pressure of academic achievement at school can lead to stressful life, depression, and the worst case in suicidal act. Rapid cycle of disruption requires continuous personal and social renewal. For an individual to cope with the rapid change, one should have strong sense of self- efficacy which is fundamental to shape the future.

People’s strong sense of self efficacy is very beneficial in facing challenges even in the most difficult situation in every endeavor of life.

According to Bandura, self-efficacy refers to beliefs in one’s capability to organize and execute the courses of action required to produce given attainments (1997:3). Furthermore, Bandura stated that people’s beliefs in their efficacy influence the course of action people choose to pursue, how much effort they put forth in given endeavors, how long they will persevere in the face of obstacles and failures, their resilience to adversity, whether their thought patterns are self –hindering or self-aiding, how much stress and depression they experience in coping with environmental demands, and the level of accomplishments they realize (1997:3).

Literature is the reflection of various experiences, ideas, passions of human beings in their daily life that express on several forms and styles of literary works. Since literature directly derives from human life, it can increase our knowledge and experiences about human problems included values, morals, cultures, and human interests. The work of Helen Keller, The Story of My Life, is one of the examples of literary work which describes a human endeavor in life.

The Story of My Life is an autobiography based on the true story of Helen Keller’s Life. In her work, Helen Keller, as a human being, shows the greatest struggle and perseverance to face every obstacle in the most inconvenience situation. Born as a normal child, and then lost her eyesight and hearing at very young age resulting her being blind, deaf and mute, yet she struggled and eventually able to speak and become successful in life. Instead of being desperate, she showed the spirit of determination and took control of her own destiny. Her achievements have inspired people with and without disabilities, leading them to believe they can accomplish more than they ever thought possible.

The significance of this literary research has been to apply the theory of self-efficacy to analyze Keller’s narration in her autobiography from the perspective of psycoanalytic concepts. Self-efficacy theory is a part of social cognitive theory proposed by Albert Bandura. Social cognitive theory emphasizes the prominent role of self-regulatory processes in psychological functioning. People with a strong sense of self – efficacy view challenging problems as tasks to be mastered. Develop deeper interest in the activities in which they participate. Form a stronger sense of commitment to their interests and activities. Recover quickly from setbacks and disappointments.

Modern psychology has had an immense effect on both literature and literary criticism. It is not difficult to see why psychoanalytic theory has been widely used in the study of literature. These two branches of social science studying human behavior are interrelated and mutually beneficial. And the fact that literature is the portrayal of human beings and their relationships is fascinating because psychoanalysis deals with human beings in conflict with themselves and each other. As stated by Pombo, 2005 (cited by Santos et al, 2018), by understanding interdisciplinarity as the proximity established by fields of knowledge with one another in order to exceed the discursive principles of one field in the intersection with the theoretical perspectives and functioning modes of the other, it can be seen that interdisciplinarity is opportune for the break of the specialized character of the disciplines, a break that can be varied on different levels and in different degrees.

Psychoanalytic literary criticism is a literary theory which, in method, concept, or form, is influenced by the tradition of psychoanalysis initiated by Sigmund Freud. However, there are many theories of psychology other than Freud’s that can be used to analyze literary text. The object of psychoanalytic literary criticism can be the psychoanalysis of the author or of a particularly interesting character in a given work. Wellek and Waren (1949:75) stated that psychology of literature is the psychological study of the writer, as type and as individual, or the study of the creative process, or the study of the psychological types and laws present within works of literature, or, finally, the effects of literature upon its readers (audience psychology).

Leite,2003 (cited by Santos et al, 2018) stated that, in the creation of a work of art, the author goes beyond the superficial and apparent aspects of everyday life reached from a historical and sociological perspective in the search of what, by being expressed about the human psychological condition, will continue to be valid in highly diverse situations. From this point it can be seen the signiﬁcant resources in the attempt to explain the creation and permanence of a literary work are the contributions of contemporary psychology such as the description of the behavior and inner experience of an individual as a spontaneous activity, the continuity between the different degrees of problem solving and of the creative capacity and the attempt to interpret the unconscious life through dynamic forces.

Sources of Helen Keller Self Efficacy as Portrayed in The Story of My Life. It may sound impossible for a deaf and blind person to write a book which become the object of this research. However, the fact that her book was published and become her legacy until present day is a valid prove that she had conquered her fear and self-doubt. Therefore, this research was carried out based on the hypothesis that self- efficacy belief plays an important role in Keller’s life journey. Self-efficacy is the belief we have in our abilities and competencies. Bandura (1997) recognized four major sources of self-efficacy and emphasized that it is by the reciprocity of these factors that people grow significant belief or disbelief in themselves.

The theory exhibits the idea that the perception of self – efficacy is influenced by four factors: mastery experience, vicarious experience, verbal persuasion, affective and psychological state (Bandura,1994). Below is the explanation of the data findings based on four major sources of self- efficacy belief according to Bandura’s theory:

In The Story of My life, Keller’s narrated how she had to struggle to master simple communication skill in order to communicate with the people around her. The following lines has displayed that Keller’s initial mastery of using crude sign lead to a repetition of similar actions which she believed could help her to make the peole around her understand what she intented to say..

“My hands felt every object and observed every motion, and in this way I learned to know many things. Soon I felt the need of some communication with others and began to make crude signs. A shake of the head meant “No” and a nod, “Yes,” a pull meant “Come” and a push, “Go.” Was it bread that I wanted? Then I would imitate the acts of cutting the slices and buttering them. If I wanted my mother to make ice-cream for dinner I made the sign for working the freezer and shivered, indicating cold ( Keller, 2010:5).

Once she realized that the sign she made can be understood by the people around her, she already had mastery experience. Then, she continued to make another sign in hope that other people will understand the meaning of the sign she made.

A Life Lesson in Keller’s The Story of My Life: Empowering Self-Efficacy. (2020, Sep 08). Retrieved from https://studymoose.com/a-life-lesson-in-kellers-the-story-of-my-life-empowering-self-efficacy-essay 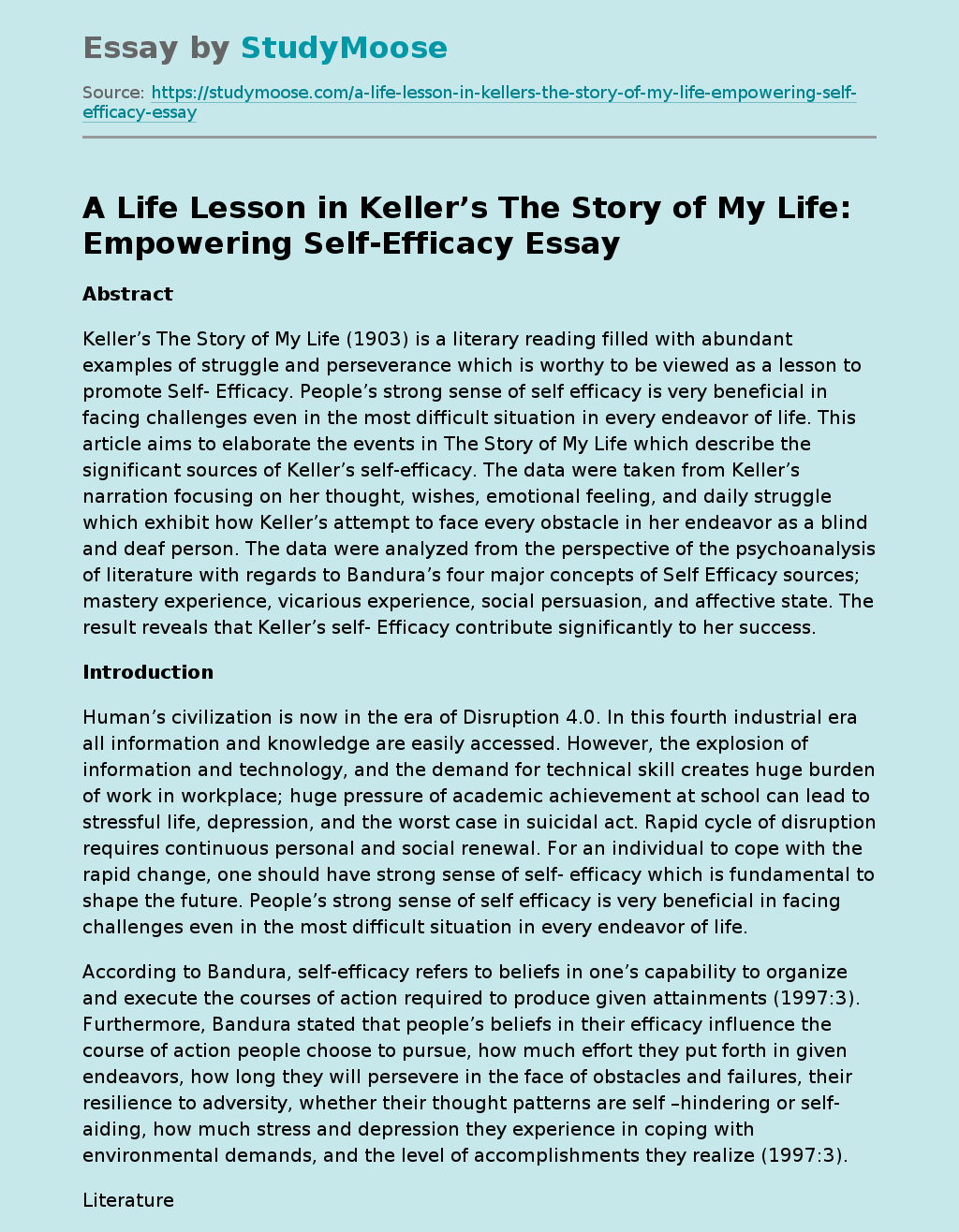