Beethoven’s Symphony No. 5, Movement, 1 and Stravinsky’s Firebird Suite are two compositions that initially sound quite similar. They are both dramatic, extremely intense, and have the ability to leave a lasting impression upon listeners. There are, however, several key differences that separate the two, including expression, timbre, and overall effect. Although the melodies and general manner of the two pieces may seem alike, Symphony No. 5 is much more grand and composed while the Firebird Suite is more erratic and less sophisticated as a whole.

Don't use plagiarized sources.
Get Your Custom Essay on Music Reaction Just from $13,9/Page

Symphony No.5 is arguably one of the most famous compositions in the world, and begins with a melody with which most people are familiar. Within the first four notes, it is evident that the piece was written in a minor key with a respective melody. There is a vast range of notes throughout the symphony, with the high and low pitches resulting in two different effects. In many compositions, the most dramatic part of a song will typically consist of notes in higher octaves; but in Symphony No.

5, it is the lower pitches that make up the main melody and seem to be the most dramatic.

By building the song around lower pitches, Beethoven has created an air of potential energy, with light runs and scales from the string sections providing the harmonies and escalating the drama of the lower notes. One of the most noticeable characteristics of the main melody line is the rhythm and repetition of the phrase. It consists of a triplet that stays on one note, and then jumps to a lower note that is sustained. As this phrase is repeated, it also starts to create the beat of the symphony, which is extremely clear.

Even as the instruments add in quicker-paced scales that go up and down in the background, there is a strong and steady pace that is maintained by the melody line. With the melody line being able to stand out amongst all the other symphony parts, it develops a very bold and brooding musical expression. It is so vivid and moody, that one can picture Beethoven himself, walking briskly through the streets of Vienna while everyone else automatically clears the way for him. Symphony No.

5 has essentially became an extension of its composer, reflecting everything he was trying to express—the various components of his own personality and outlook. Beethoven also adds variation to the song through changes in tempo and dynamics. The quicker tempos tend to serve as a way of building up each musical phrase, yet are played at a fairly piano to pianissimo level. Like the drama that the lower pitches create, the parts that are played quietly also create potential energy that makes the louder, slower, and lower parts of the song that much more impactful. In terms of texture, Symphony No.

5 is surprisingly simple considering the intricacy of the notes and the way all of the instrumental parts are pieced together. There are several pauses that add tension to the song, while also eliminating too much unnecessary sound or instrumentals. This symphony, overall, has a very dark and intense timbre. It is dramatic and moody, but at a sustainable level that is not too harsh on the listeners’ ears—that is, it is relatively easy to listen to for a lengthy period of time due to the lower pitches and pianissimo parts that allow for the audience not to be overwhelmed.

Stravinsky’s Firebird, similar to Beethoven’s piece, also begins with an introduction of accented notes and lower pitches. In this song, however, it is the higher notes that are accented rather than the lower pitches. The melody is also not nearly as easy to follow, as there is significantly less repetition. Even though both compositions involve similar instruments, Firebird uses many of the higher voices as the focal point of the song rather than the lower instruments. Throughout the piece, high strings, the xylophone, and even higher octaves played by the trombone can all be heard.

The Firebird harmonies are also much more muddled and not necessarily played in sync with the melody line. There seems to be several different rhythms that are being played simultaneously during the louder, more dramatic sections of the song. This makes it quite difficult to find and maintain the beat of the piece, whereas Beethoven’s symphony is easier to follow. Regardless of its lack of simplicity, Firebird is just as expressive as Symphony No. 5. The significant change in tempo and dynamics create emotion within the piece, adding depth to the song.

Firebird’s dynamic changes, in fact, may be even more dramatic as it ranges from pianissimo to fortissimo; and since the higher pitches are the tones being emphasized, it is much less understated than Beethoven’s piece. It is also more complex in terms of texture. Not only does the showcasing of more instruments add to the composition, but Firebird also has more measures that serve as a relief from the otherwise frantic nature of the song. While most of the piece is intense, there are bits of it that sound light-hearted and carefree.

During these sections, the tempo is not always slower but there are fewer instruments overlapping each other, resulting in less chaos. Still, it is Firebird’s timbre that makes it clear how different it is from Symphony No. 5. It is bright, brilliant, and harsh, simply because of the pairing of high pitches with a loud dynamic marking and a quick tempo. Perhaps this is a clever decision by Stravinsky, trying to mimic the calls of a wild bird—shrill, shrieking, and somewhat harsh on the ears at times.

When comparing the two compositions, it is clear that Stravinsky’s Firebird is more complex; but Beethoven’s Symphony No. 5 is much more composed overall. It is not as aggressive in terms of loud, shrieking high notes, but rather understated and intense. This also evokes more emotion out of the audience, as it plays on the darkness and moodiness of Beethoven’s personality. Firebird is undoubtedly entertaining and a complicated work of art; but when it comes to which piece is easier to listen to and which makes more sense upon first impression, it is surpassed by Symphony No. 5. 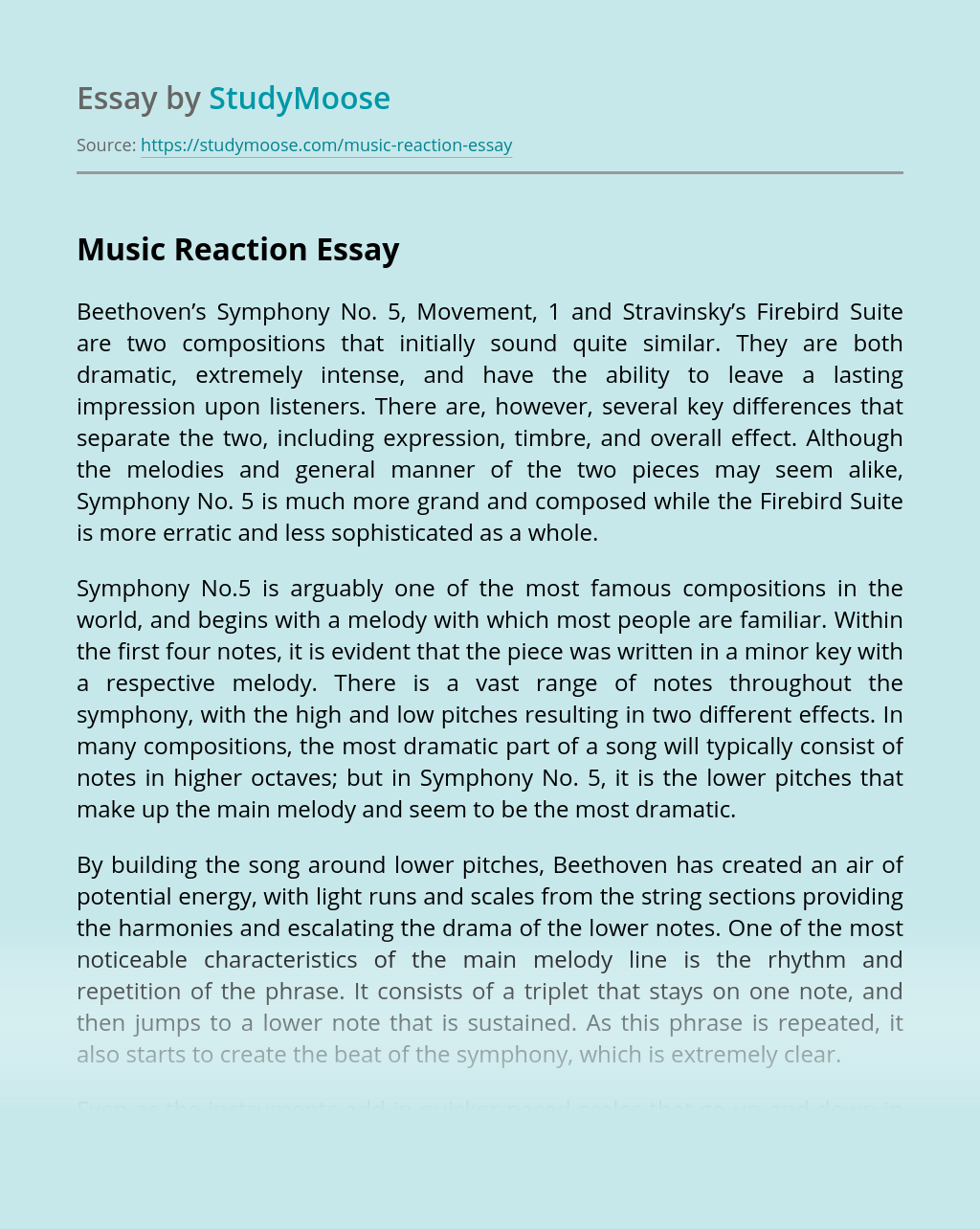 Introduction             We are aware of different health problems, their causes and consequences. Mass media create favorable conditions in which we can find the required information and can be fully informed about our health. The information we get from television, newspapers, and online sources emphasizes the threat of heart diseases among women. We keep... VIEW ESSAY

right-71437500 A signed copy of this form must be submitted with every assignment. If the statement is missing your work may not be marked. Student Declaration I confirm the following details: Candidate Name: Sameera Abdul Rashid Robed Candidate ID Number: 00181253 Qualification: International Certificate in Computer Sciences (Level 4) Unit: Skills For Computing Centre: Zambia... VIEW ESSAY

1 & 2. Sodium-24 is an isotope used in medicine and the mining industry, as it is a gamma emitter. It is used for studies of electrolytes within the body, and also to locate leaks in industrial pipelines and oil well studies. Don't use plagiarized sources. Get Your Custom Essay on Music Reaction Just from... VIEW ESSAY

“DOOMED” was the headline on the front page of the United Kingdom newspaper, the Daily Mirror, in 1961. The article explained how rhinos were doomed to disappear from the face of the earth due to man’s folly, greed, and neglect. Rhinos once roamed many places throughout Eurasia and Africa and were known to early Europeans... VIEW ESSAY