For Elise by Beethoven

While Ludwig van Beethoven’s more popular works are his symphonies, one of his works remains popular with piano students- Fur Elise. The piece was created around 1810, by the time Beethoven had gone deaf (Forelise. com, 2007). Like its composer, Fur Elise is a subject of much speculation. Fur Elise translates to For Elise and since Beethoven did not marry, several theories have cropped up as to who Elise is. According to some scholars, the title was supposed to have read “Therese” instead of “Elise,” but due to Beethoven’s poor handwriting, people deciphered it as “Elise” (2007).

Don't use plagiarized sources. Get your custom essay on
“ For Elise by Beethoven ”
Get custom paper
NEW! smart matching with writer

Therese is said to be Therese Malfatti, a woman Beethoven was in love in but rejected him (2007). Another theory suggests that “Elise” was a common term of endearment at that time and the piece was a song for lovers (2007). However), the explanation does not suit the composer’s nature (2007). He was often described as having a tortured personality (Kamien, 1998). Before one can analyze Fur Elise, it is important to study the musical force that was Beethoven.

That was how dedicated he was to his music, which served as a reflection of himself (1998). Under the influence of Haydn and Mozart, Beethoven combined the classical and romantic eras with more intensity (1998). His works are classified under three periods- early (up to 1802), middle (1803-1814), and late (1815-1827). His early works evoked Haydn and Mozart, those of the middle period were said to be longer, while his late works had fugues (1998).

This makes Fur Elise a product from the middle period. There are four elements of music- rhythm, melody, harmony and texture.

In the succeeding pages, these elements will be the basis for analyzing Fur Elise. Fur Elise is divided into three sections- A, B and C. However, A is repeated so it becomes A-B-A-C-A. Section A, and throughout the piece, has a rhythmic fluency of 3/8. The tempo is poco moto, which means little motion. It also has a pp or Pianissimo which means soft. Thus, the first section is played rather softly and slow yet fluid motion. Fur Elise has a right hand theme with arpeggios in the left hand. Arpeggio is playing of a chord with notes sounding in succession. See illustration below.

Fur Elise (Beethoven, 1967). Regarding its melody, section A is built on a short motive. This means that section A is used as a foundation for greater melody which comes in Section B. Since Section A is repeated, the structure of melody is repetition, where melody is repeated exactly. This is evinced by the repetition of first 4 bars. The bars are essentially repeated 15 times so if one learns just 4 bars, one will be able to play at least 50% of the piece. Fur Elise has a total of 124 full bars. See illustration below to see sample of this repetition. Fur Elise (Beethoven, 1967).

The first part is in the key of A minor. Minor scales are often used to denote a sad quality. Notice that the first part is like that. It is played softly and slowly, as if to introduce a poignant mood. Section A’s harmony is in A minor. It has a single pitch. Its texture or how the melody is presented is monophonic. This means that Section A has a single melody line. Section B starts on an upbeat rhythm. It has a stark difference from Section A. Its beat is dolce, meaning sweet. Its tempo is faster than Section A while still maintaining the same meter.

Moreover, Section B’s melody is built on a longer phrase. It is very ornamented, meaning in this section, the melody is enhanced. Section B also includes 32nd notes. Because of this, Section B is rather more difficult to play than the first section. Additionally, Section B has the same texture but starts in F major, then proceeds to C major, and ends on E major before going back to Section A. There is a diminishing interval before Section A is repeated. It seems that this is done to anticipate the start of another section, albeit a repeated section. This is illustrated below.

Fur Elise (Beethoven, 1967). Section C has a heavy beat. It is an A minor. This section is an interesting one since the rhythm is on the A though the right hand is playing chords not fitting with the A. This is called a pedal point, where a note, usually in the bass, is sounding against a changing harmony, etc. This is evinced is Section C. A series of arpeggios proceeds before going back to section A. This is where the piece ends, with an authentic cadence. It goes through a phase where there is a feeling of permanent repose. This author’s favorite section is the second part, Section B.

From a soft opening, it suddenly moves to an upbeat tempo. There is sheer distinction between the two sections. Also, one can see the transition of emotions from section A to B. Section A is like a subdued emotion. It is soft, almost emotional. Then Section B harps on sweetly and a bit louder. From a passive stance, it moves to an active one. It may be compared to a coming of a storm. Section A is like contemplating on an incoming storm. Section B ups the ante even more, like drizzle is starting to fall. Section C is where the storm truly arrives, destroying everything.

Then, when the storm is done, everything becomes silent again- back to Section A. Section B, for the author, is a step ahead of the preparation, of the big event but is not nearly there. That is why it is the author’s favorite section in the piece Fur Elise.

For Elise by Beethoven. (2016, Dec 01). Retrieved from https://studymoose.com/for-elise-by-beethoven-essay 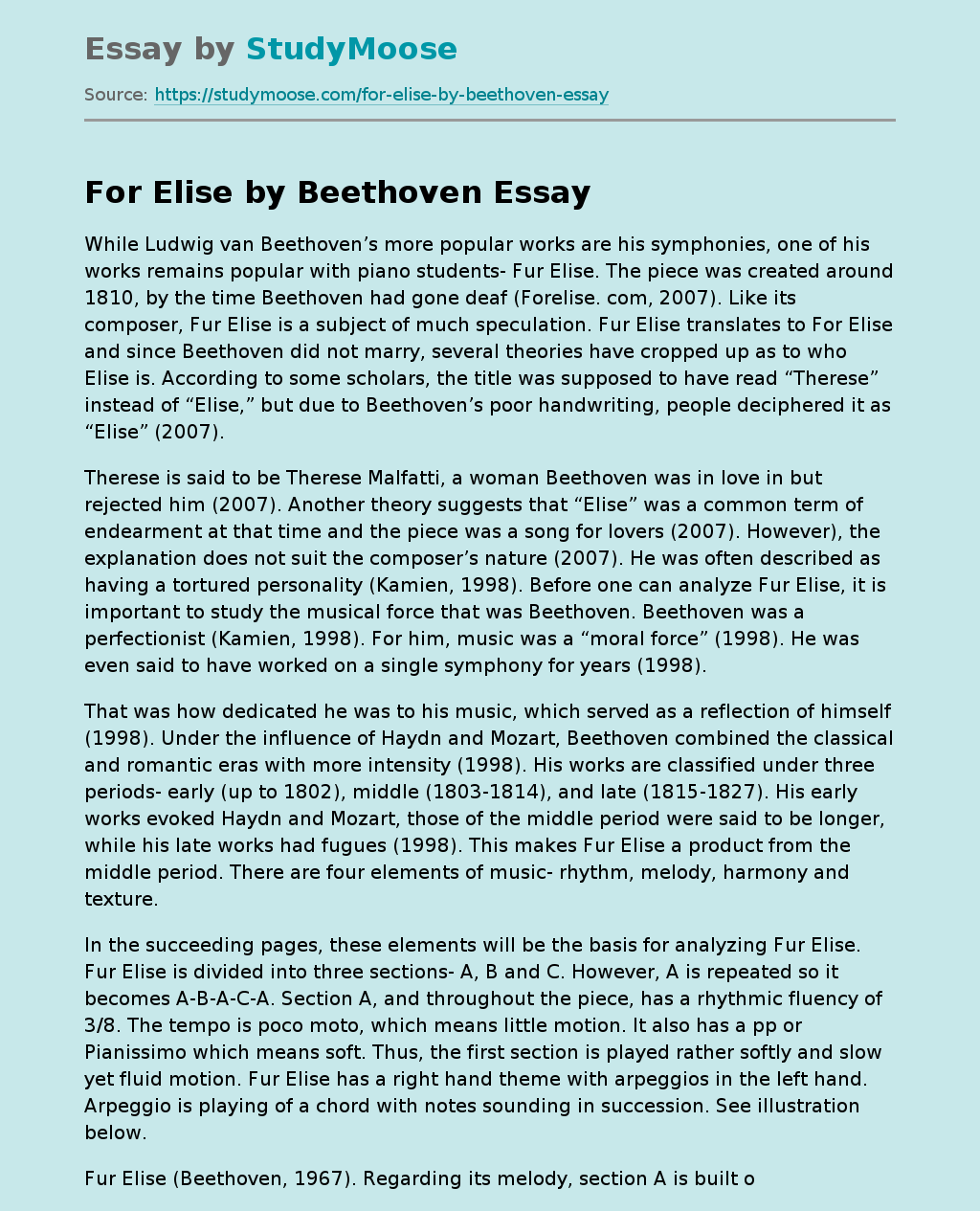