A Comparison of Haydn and Beethoven

Franz Josef Haydn and Ludwig van Beethoven are two of the greatest classical composers in the history of music, rivaled only by the masterful Wolfgang Amadeus Mozart. Beethoven, who was much younger than Haydn, moved to Vienna when he was young to study under Haydn. However, due to Haydn’s increasing age, and Beethoven’s increasing temper, the lessons only lasted for a little over a year. The lessons, if only for a short period, clearly left a mark on Beethoven, as can be seen in his compositions.

Don't use plagiarized sources. Get your custom essay on
“ A Comparison of Haydn and Beethoven ”
Get custom paper
NEW! smart matching with writer

Make no mistake, however,

Haydn and Beethoven were not carbon copies of one another. When comparing compositions of the two composers, namely Haydn’s symphony No. 95 in C minor and Beethoven’s symphony No. 5, the two composers differ in various areas, including form, theme, tonality, orchestral structure, and the overall effect their work had on the audience. The only way to truly understand the similarities of these two legendary composers is to delve into their music, comparing them movement-by-movement of the two aforementioned pieces.

Only then will we truly understand what makes Haydn and Beethoven so similar, yet so different.

The first movement of both pieces start out in their own special way. Haydn’s piece starts out loudly with a quick timpani strike accompanied by the strings, followed by an almost somber sounding melody in C-minor. The second theme of Haydn’s first movement is much more cheerful sounding as it is in C-major. After the exposition is finished, Haydn goes through an eventful developmental period followed by recapitulation.

Beethoven’s first movement starts out with the infamous short-short-short-long, which is then repeated. This becomes the motive of Beethoven’s piece, which can found intertwined throughout the entire piece.

The intertwining of this single motive creates a consistency throughout the entire symphony; making all four movements feel as one. Although Beethoven may have not intentionally tried to do this, as it was never really done before, it really gives the symphony a special sound as a whole, something that Haydn’s symphony no. 95 lacked. Beethoven’s first movement is sonata form, something that he inherited from Haydn, and starts out in C-minor, just as symphony no. 95 does. The first theme of Symphony no. 5 is made up of imitations and sequences of those first 4 bars, which give off a tense, conflicted feel. The second theme ofBeethoven’s first movement is much more lyrical than the first theme. Here Beethoven completely changes keys to E-flat, rather than simply switching to a major tonality like Haydn does.

In the second movement, however, Haydn starts out in E-flat major. The second movement, as per usual, is a much slower piece to contrast the strong, fast, first piece. Haydn uses a series of variations in this movement to keep the audience attentive, switching between major and minor tonalities from time to time. The amount of variation in this second movement is extensive, and really adds a lot to the movement. Beethoven’s second movement is in A-flat major and opens with two themes being presented, which are then varied in alternations. The second theme of this movement incorporates a harmony that features the clarinets, which are present due to Beethoven’s expansion of the orchestra over Haydn. Other instruments that Beethoven uses that Haydn does not in these symphonies are the piccolo, contrabassoon, and trumpets.

By expanding his orchestra, Beethoven is able to create a larger, more diverse sound than Haydn is able to do. Beethoven’s second movement includes a 3rd theme that has thirty-second notes played by the strings with a counter phrase being played in the winds simultaneously, and the movement ends loudly in fortissimo, with many crescendos. Although these two composers first movements were somewhat similar in form and style, it is clear in the second movement that were starting to see the similarities morph into differences between the two composers, which continues into the third movement.

Haydn’s third movement follows the prototypical minuet, trio, minuet form. However, this is a stylized dance piece, rather than an actual dance piece due to Haydn throwing in little twists that would throw off any attempted ballroom dance. The minuet returns to the original tonality of C-minor, while the trio switches to C-major.

The trio form consists completely of even eighth notes played by a solo cello, which Haydn included to satisfy his audience in London. Beethoven does something very different in his third movement, as he forgoes the typical minuet-trio-minuet form for the scherzo-trio-scherzo form. Scherzo, which translates to “joke” in Italian, is derived from the minuet. The main difference is that scherzo form is played much more playfully and somewhat humorously, like a joke. Beethoven, like Haydn, returns to the starting tonality of C-minor for this movement. At the end, the short-short-short-long motive from the beginning of the symphony returns, and begins to take over the piece as it moves directly into the fourth movement without any hesitation.

The fourth movements of these two symphonies also differ in form, as Haydn chooses to go with a rondo form while Beethoven chooses a variation of the sonata form. Haydn’s rondo form allows the music to transition beautifully into the finale. Haydn’s finale consists of loud, furious music including brass fanfares that is starkly different than a normal classical finale. Beethoven’s fourth movement is a fast, unusual sonata that begins immediately following the third movement. His finale is played in C-major, and consists of 29 bars of chords played in fortissimo. These chords allow Beethoven to conclude the symphony by ending the tension that has been furiously building throughout the entire piece. Beethoven’s incredible finale, as with Haydn’s, are perfect endings to these two monumental symphonies that surely leave a lasting effect on their respective audiences.

As can be seen throughout Haydn’s symphony no. 95 and Beethoven’s symphony no. 5, the two composers were very similar, yet very different from one another. Beethoven uses a lot of what he learned from his time with Haydn, but is able to expand on those ideals and create something of his own being. His ideals, however, are soundly built off of the foundations that Haydn paved for him, which is a benefit from being the student rather than the teacher. Even through all of the differences in the two symphonies, such as Beethoven’s expansion of his orchestra or Haydn’s refusal to stray form minuet form in the third movement, these two composers share one main thing in common, and that is their ability to create beautiful pieces of art that won’t be soon forgotten in the minds, and the hearts, of their listeners.

A Comparison of Haydn and Beethoven. (2016, May 14). Retrieved from https://studymoose.com/a-comparison-of-haydn-and-beethoven-essay 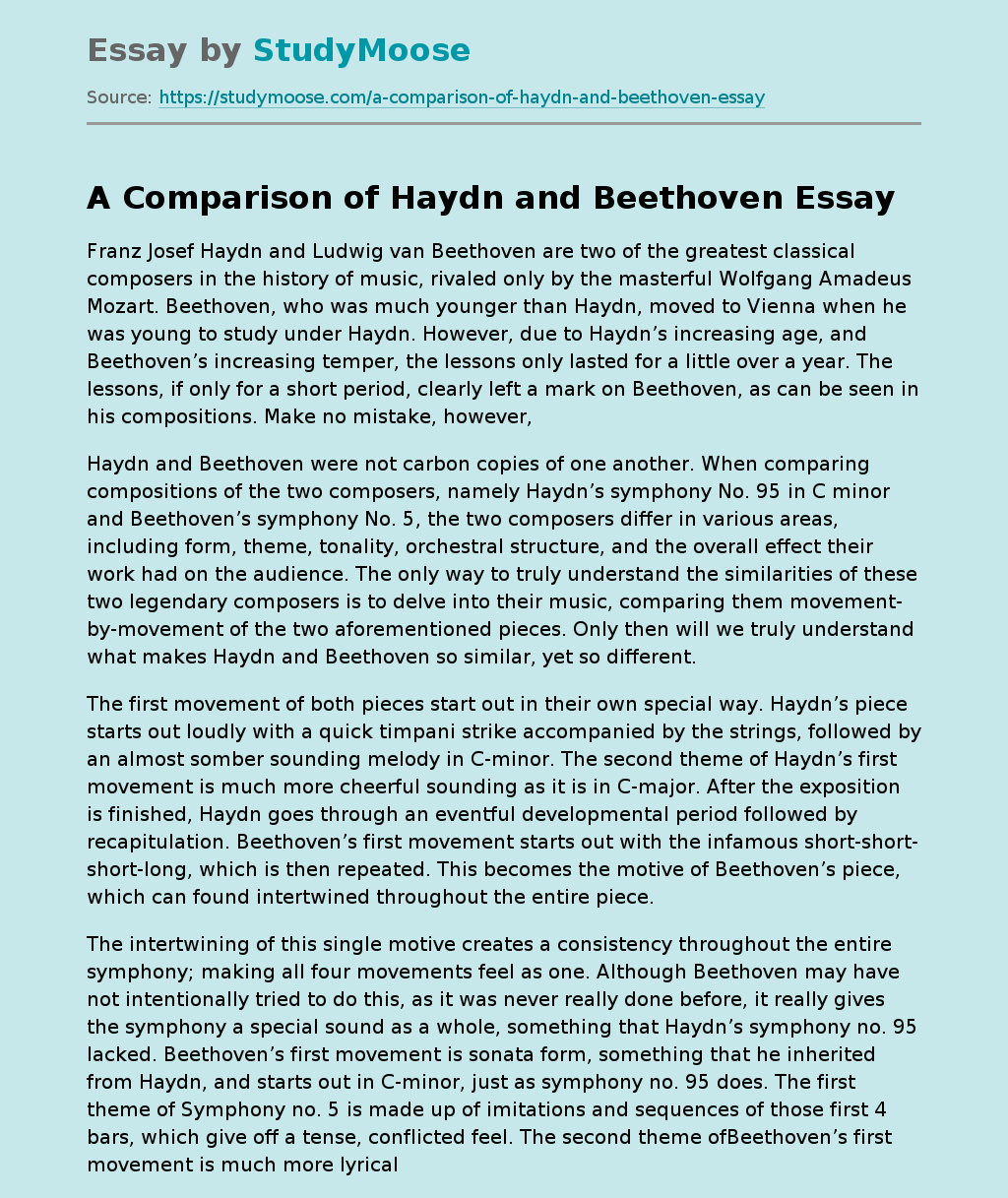