The Issue of Privacy in Our Society: Why Privacy Matters Even if You Have Nothing to Hide by Daniel Solove

In the current society, the term privacy is ever becoming ubiquitous. Furthermore, the earlier mentioned term is seen in different primary and secondary sources such as social network sites, online transactions and so forth. Therefore, in the essay, “why privacy matters even if you have nothing to hide” that was published in 2011 by Professor Daniel Solove makes an in-depth argument of the privacy issue that affects all individuals whether guilty or innocent. The author is direct in approach and dissection of the privacy issue that is mentioned in discussions that are about the government’s collection and evaluation of personal information.

Don't use plagiarized sources. Get your custom essay on
“ The Issue of Privacy in Our Society: Why Privacy Matters Even if You Have Nothing to Hide by Daniel Solove ”
Get custom paper
NEW! smart matching with writer

Through Daniel, there is an explanation of the argument on “I’ve got nothing to hide” that is numerously mentioned. The diverse adherents to the earlier mentioned statement affirm that the concept that the information is not revealed makes the concept of invasion of privacy not implausible.

Therefore, this paper will examine a rhetoric analysis of Solove’s article on privacy.

First and foremost, the notion of rhetoric criticism denotes the mode of evaluation that is a focus on the text that the author incorporates. From the examination of Richards (39), the rhetoric criticism entails working inside coupled with out on the texts that the author incorporates. As such, from the analysis of Solove, there is an in-depth use of rhetoric criticism. From the onset of the essay, there is a discussion on governmental data collection coupled with surveillance do not concentrate on the distinctive problems that are associated with processing and storage.

However, there is an in-depth analysis of the power imbalance emanating from the government and the public. As such, through the focus on comprehensive and argumentative approach, Solove makes an emphasis on the prospect that the government makes the collection of small and seemingly harmless information about people which is used to make assumptions about people.

Continuously, there is the lack of awareness of the data that the government possesses since the data is obtained outside the context of the people. Therefore, there is the prospect that there is no environment for the correction of either the errors or misconceptions that the government has about us. There is an in-depth explanation of how the concept of “nothing to hide” argument concentrates on two minimal forms of privacy problems while ignoring others. Through the effective literary work by Solove, there is an emphasis on the notion that privacy is in most instances not often threatened by the single extreme act, but through a gradual accumulation of small or minute unobtrusive acts. Through the use of effective texts, the author makes an emphasis that each act may be seen as innocuous, but through time, “the government will be watching and knowing everything about use.”

Solove affirms that even if a person has nothing personal to hide, the government in an inadvertently harm people due to different errors or acts of carelessness. Through the use of simple and yet understandable analysis of texts, Solove emphasizes that when people comprehend the broad array of privacy issues that are associated with the collection of information by the government. Therefore, the nothing to hide argument is minimally persuasive. Furthermore, the author makes a plausible introduction to the potential crisis that the government information gathering coupled with surveillance that is often overlooked with an intention focused on reminding the audience of the significance of privacy. Solove in a comprehensive manner ensures that through his textual tone manages to convince the different audiences on the perspective that the nothing-to-hide does not in an in-depth mandate cover the holistic problems that may emanate from governmental information gathering and unwarranted surveillance. As the second facet of rhetoric analysis, Solove incorporates a highly effective ethos.

In the building of his ethos, there is a clear revelation of morality and credibility of the writer. As such, there is a demonstration of distinctive scholarly credibility coupled with expertise as well as the establishment of his logos through presentation to the audience with highly logical arguments. Finally, the writer makes a plausible development of pathos via inculcation of dramatic and emotional language in appealing to the different audience’s emotions. Richards (39) emphasizes that in the introduction of the essay, Solove aims towards the development of intrinsic ethos. As such, through effective textual development, there is a generation of an ethical appeal to the readers. The paper is formatted in a manner that it is a preview of what is intended to be discussed in a detailed mandate in the whole body of the essay. In the essay, the author commences by stating usual syllogism that entails antithesis to Solove’s argument: “ I have nothing to hide, only if you are doing something wrong you should worry and then you don’t deserve to keep it private.”

The earlier mentioned statement in reference to Luna and Joshua (92) is a complete juxtapose to the title and results to the building of trust between the writer and readers since there is recognition of the common belief that is held by the prospective audience or readers. Therefore,in order to construct a relationship and persuade the reader, Solove commences through strengthening his perceptions and perceived moral trait through alternation between eh opposing points of debate. Through analysis of the opposing views, there is a more fair-minded approach towards essay writing by Solove. The effort that the writer puts in place towards objectively attempting to explain the distinctive reasoning behind the main argument on privacy results to an evident growth of good will between the writer and the readers. Furthermore in ensuring and bolstering credibility on the claims of privacy, Solove makes an in-depth quote of the privacy experts, scholars, and many more individuals in his introduction.

As a clear example, Solove quotes the Nobel winner Aleksandr Solzhenistyn who affirmed that “everyone is guilty of something or something to hide; all that an individual has to do is look hard enough to find what it are (Luna and Joshua 92).” The quotation as mentioned earlier and many more enables the writer to identify with the readers, hence denoting the facet of ethos or emotional connection. Additional through quotes of the different scholars, there is enhanced credibility and trustworthiness among the readers. Solove further constructs his ethos through the demonstration of scholarly credit coupled with portraying his professionalism into the international discourses on privacy issues. The extensive effort towards the expansion of his audience to ensure that it is inclusive of the international regions is a viable approach by Solove to enhance the emotional appeal.

Admittedly, Solove makes an explanation of the privacy concerns and how they are not only associated with American government but also an international debate. There is a description of how the government of Britain installed numerous cameras across the different cities in the region and declared “if you have nothing to hide, you have nothing to fear” Richards (39) asserts that added to the appeal to vast audience, Solove makes a successful portrayal of the distinctive scholarly credit through historical discourse of privacy. There is mentioning of historical literature such as that of George Orwell and Franz Kafka (Solove 38). Through acknowledging the popular historical books that concern issues on public surveillance and collection of data, there is an in-depth association and relation of both present and past regarding privacy. Therefore, there is extensive information about the audience on the rhetoric discourse on privacy rights as a long term and vital issue. The connection between the past and present on privacy issues shows that the writer is an expert on the ongoing discourse that circumvents privacy. Lastly, on the notion of ethos, or emotional appeal, the author transitions in the grammatical position.

In reference to Solove (1088), there is a transition from the first person to the third person through the creation of a “We-They” relationship. Through the earlier mentioned relationship, the author ensures that himself and the readers are the “we” and the proponents of the “nothing-to-hide argument as the “they.” Therefore, the grammatical transition by the writer leads to an equal relationship between him and the readers. Therefore, Solove creates an ethos or emotional appeal in which he is seen as not superior to the readers. As such, the nothing-to-hide proponents do not make an in-depth recognition of the underlying issues since due to the prospect that they do not result into a given visceral form of injury.

Ethos and rhetoric criticism are aspects that are evident in the essay by Solove on privacy issues. As a plausible essay, the author exudes expertise in making an emotional connection with the readers. The incorporation of ethos tools such as the grammatical transition in first person analysis, the author makes a remarkable appeal to the audience. Furthermore, he makes an effective communication and generating concern on the privacy issue across the US and globally.

The Issue of Privacy in Our Society: Why Privacy Matters Even if You Have Nothing to Hide by Daniel Solove. (2021, Sep 27). Retrieved from https://studymoose.com/the-issue-of-privacy-in-our-society-why-privacy-matters-even-if-you-have-nothing-to-hide-by-daniel-solove-essay 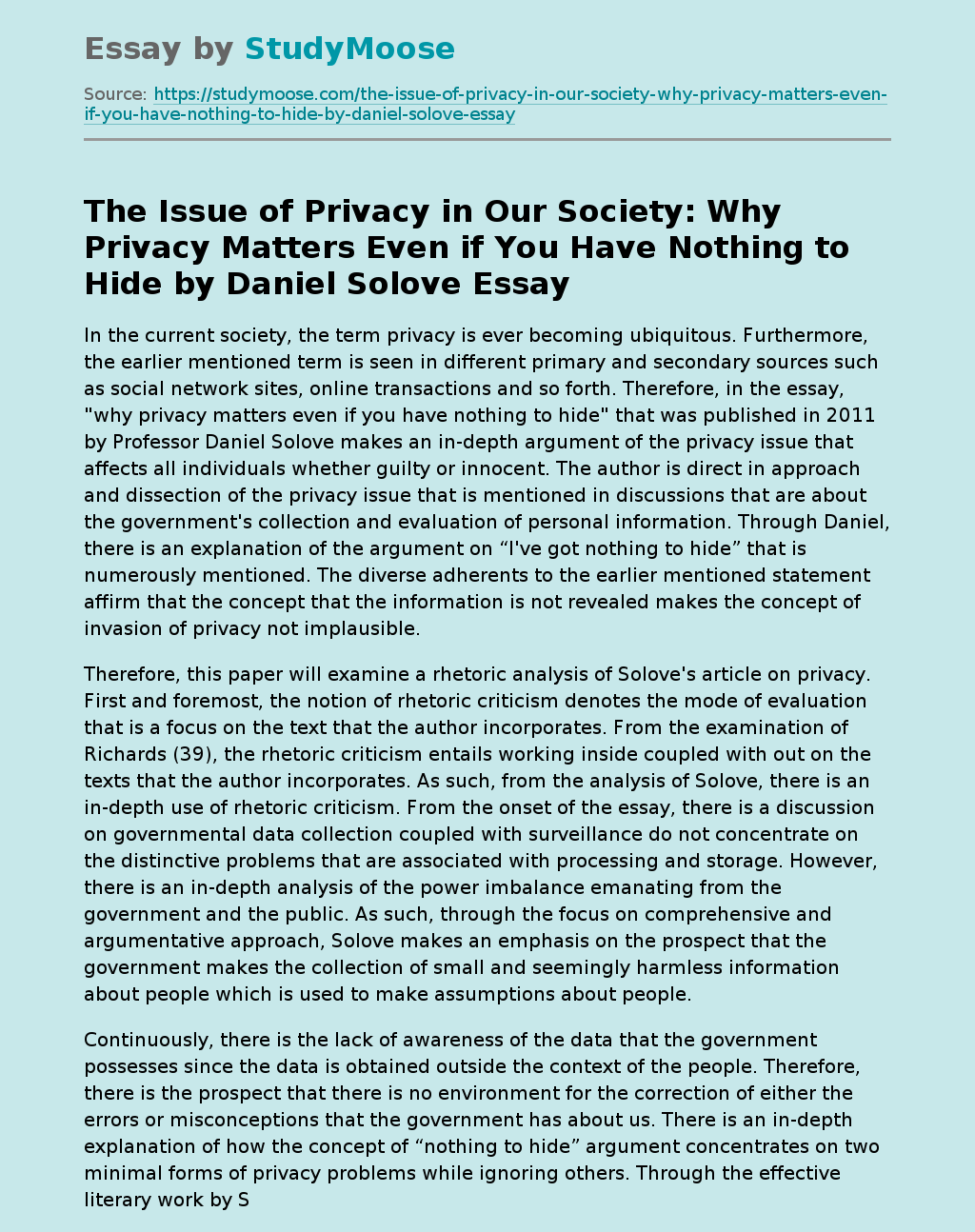