The Interrelated Concepts of Culture, Civilization and Humanity

The concepts of culture, civilization and humanity revolved around a society. In discussing societal issues, we inevitably stumble upon these concepts, as they are the building blocks of every community. Culture is the inherent collection of discernible characteristics of a group of people that comprise a society. Manifested in many ways, the culture within a society is reflected in the various arts of its members, such as architecture and visual arts. It is also embedded in the language and historical roots of a society.

Turn in your highest-quality paper
Get a qualified writer to help you with
“ The Interrelated Concepts of Culture, Civilization and Humanity ”
Get high-quality paper
NEW! AI matching with writer

It is hard to determine how a certain culture is formed, but it is developed in accordance to the traditional ways of the people and their needs. Culture is also shaped through the course of time and is influenced by the socio-political factors like sexism, racism, and stereotyping. If there is an existing culture, a civilization is formed with its distinguishable characteristics and cultural identity. A group of people can be regarded as a civilization when its members attained high standards of living, as their culture, science, economics, and political system reached certain heights by maximizing their potentials.

For instance, the proverbial Atlantis is a civilization that was believed to be an advanced society that reached the zenith of human capacity. Humans, on the other hand, are the group of people who create civilization. They are the mind that controls the functions of society. They are the manpower behind the realization of goals and ideas. They are the proponents of scientific innovations to improve the quality. Benevolence is also innate among humankind.

It is inherent in humans to be good and to do actions that are good.

The definitions above are derived from my personal observation, experience, and the knowledge I acquired through school lessons and reflection. I was able to learn more about culture, civilization, and human nature through my observation of the various aspects of society as part of the human race. The definitions can also be accounted for my personal experiences, as I myself was raised to adhere to a particular culture. They can also be derived from my own perception and understanding of the things I learned.

The world is composed of different cultures. On the surface, one may think that each culture possesses unique attributes. However, as one delves deeper and understands further the aspects of the various cultures around the world, he or she can find characteristics of a certain culture that are similar to others. This is because I believe that we all came from the same roots. In my personal view, the variations in culture may have occurred as we occupied

The Interrelated Concepts of Culture, Civilization and Humanity. (2016, Aug 31). Retrieved from https://studymoose.com/the-interrelated-concepts-of-culture-civilization-and-humanity-essay 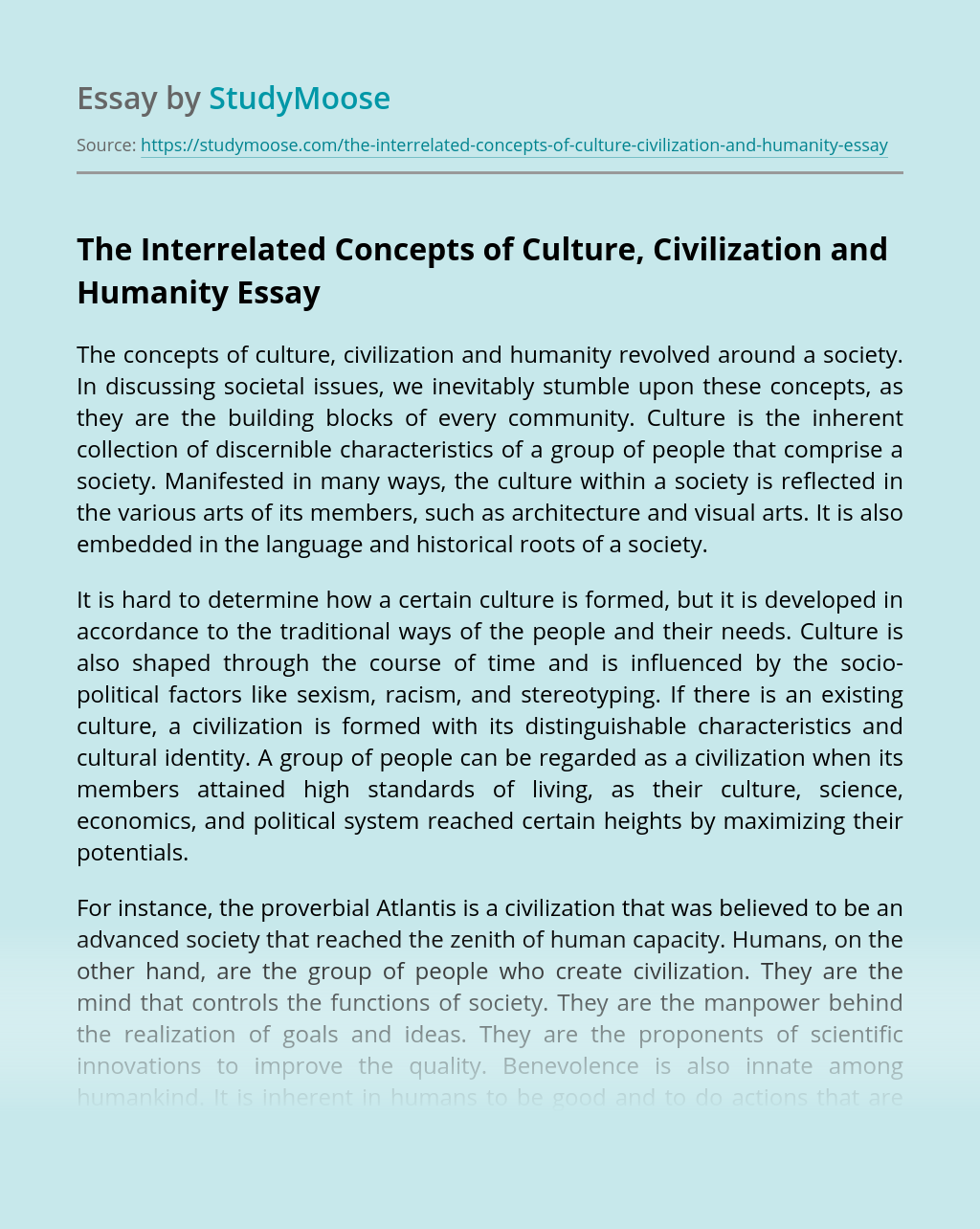 Turn in your highest-quality paper
Get a qualified writer to help you with
“ The Interrelated Concepts of Culture, Civilization and Humanity ”
Get high-quality paper
Helping students since 2015
Stay Safe, Stay Original