The Mayan Civilization and the Qin Dynasty: Similarities and Differences

To begin this essay, I will start by comparing and contrasting both civilizations with an emphasis on the political structure. The Qin dynasty was more aggressive, therefore, better structured than the Mayans.

The Mayan civilization had a monarch political structure. Scholars could decipher hieroglyphs to recover the name of the monarch ruler “18 Rabbit”. 18 Rabbit held extensive power. I believe this to be true because he ordered the construction of an exquisite palace that required more than 30,000 person-days of labor (in text-citation).

Don't use plagiarized sources. Get your custom essay on
“ The Mayan Civilization and the Qin Dynasty: Similarities and Differences ”
Get custom paper
NEW! smart matching with writer

I think the ruling classes subjugated the lower classes in respectfully compared to the Qin dynasty; which will be addressed in the following paragraph. From what I’ve gathered, the poorer class wasn’t looked down on. Aristocrats gathered around the ruler. Some noblewomen even played important roles in both politics and religious life.

This differs greatly from the patriarchal style of the Qin dynasty. Nobles had the opportunity to become a priest or scribes at the royal court and even adopted professions such as sculpture or painters.

Most of the population were farmers. Clear labor lines were emphasized regarding gender roles; fighting and hunting for men and women had the tasks of food preparation and home operations.

Also, provinces and counties were two levels of administration beneath the central government. Officials received their positions through the court and could be dismissed basically whenever by the Emperor. I previously mentioned very briefly about the differences in how the ruling classes subjugated the lower for Mayans vs. Qin. To further elaborate regarding the Qin dynasty, their approach was aggressive and unsympathetic.

Harsh punishments (which could include execution) were the consequences for wrongdoers. I think the Qin dynasty was structured better than the Mayan civilization because of the harsh punishments set in place. Moving on to my last point, the Qin dynasty viewed merchants as parasites. There was a heavy restriction and taxes placed on private commercial activities. Furthermore, vital forms of both commerce and manufacturing were under a government monopoly (in text citation).

Now that an insight into the political structure and an understanding of how the ruling classes subjugated the lower class has been established, I’ll discuss the differences in their religion, and the roles they played in society. The Mayan civilization practiced a polytheistic religion with different names for gods shared through deities of similar cultures. The gods were an important factor to the Mayans. They built a ceremonial core, and they also participated in various human sacrifices. Traditional decapitation sacrifices were an offering and they also sacrificed the losing contestants of a rubber ball game. It seems as if religion had an important role in the day-to-day aspects of Mayan civilization.

When it comes to comparing both cultures as a whole, I think it’s safe to say they were similar in many ways but expressed it through different aspects. They both had written forms, Chinese characters for the Qin dynasty and Hieroglyphs/calendars for the Mayans. The Mayans were more advanced; they had impeccable knowledge of astronomy and kept records. On the other hand, the Qin dynasty had a standardized monetary system and a system of weights and measures. The lasting effects of the Qin dynasty were administrative and political developments ta served as a model for future dynasties (in text citation).

I didn’t get a sense of advancement opportunities from the Qin dynasty as I did with the Mayans. In the Mayan civilization, as I have previously mentioned, the nobles became priests or scribes on the royal court. Furthermore, as the society’s wealth grew so did the role of artisans and traders, who began to form a small middle class (In text c). This was the complete opposite for the Qin dynasty. No advancements were given for peasants; instead, the central government found ways to effectively tax them more and force them to be utilized for military services and many different public works projects. This gave me the impression that the Qin dynasty was slightly greedy; he wanted to use the peasants as much as he could without giving them anything; basically any opportunity that could benefit him, he didn’t mind no matter the expense to others.

Through these actions you might be able to guess what the path of consequences were the end result. Qin wanted to leave a legacy for his son. While he meant well with his intentions, his results were the complete opposite. His leadership was too harsh, leading to the alienation of many important groups. Harsh taxes, forced labor projects and censors on thought and speech were overwhelming. After his death, the dynasty ensued rivalry and was overthrown just four years later. This didn’t surprise me; tension can only be suppressed before it explodes.

The Mayan Civilization and the Qin Dynasty: Similarities and Differences. (2021, Dec 02). Retrieved from https://studymoose.com/the-mayan-civilization-and-the-qin-dynasty-similarities-and-differences-essay 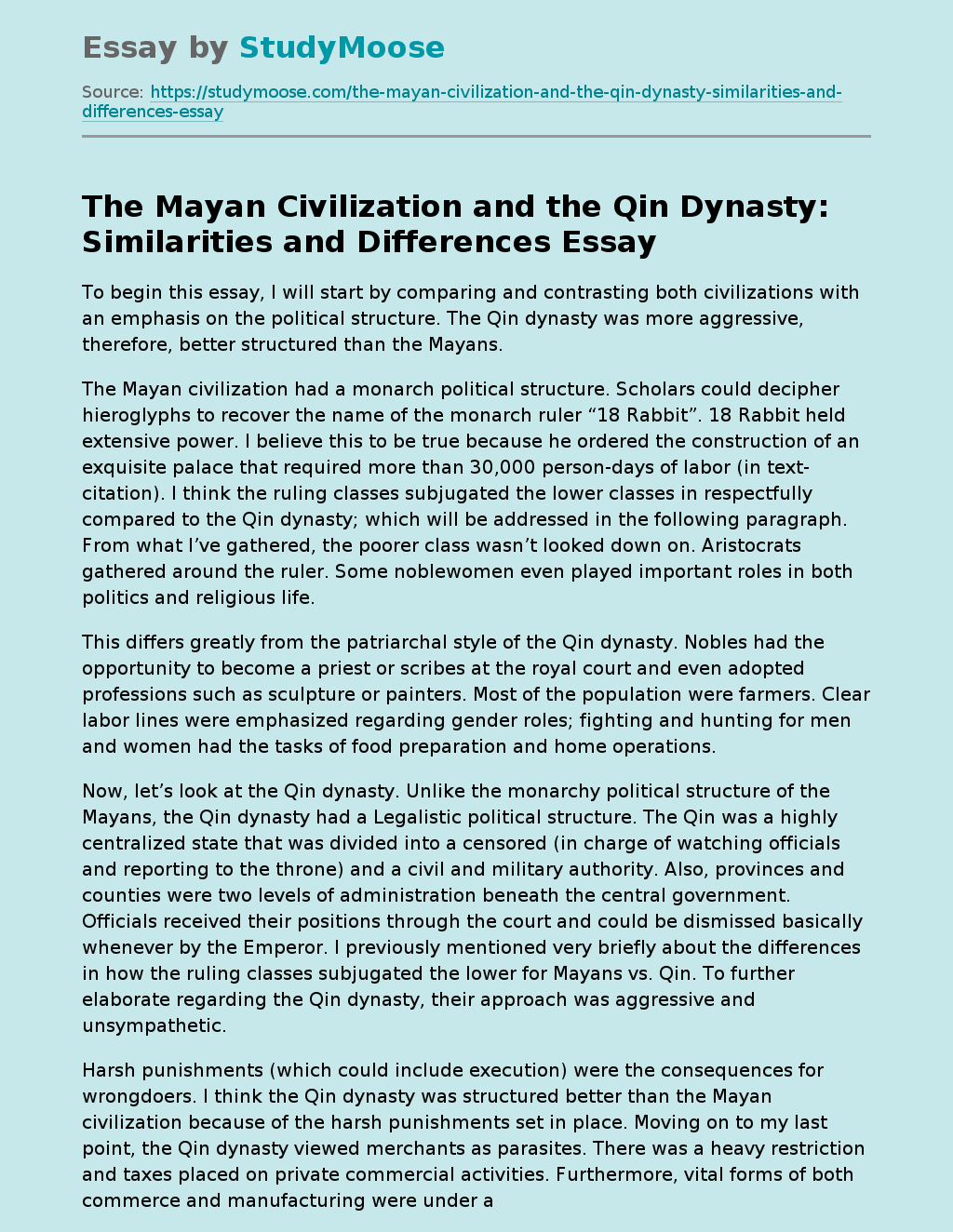