Qin Shi Huang (or Shi Huangdi) was the First Emperor of a unified China, who ruled from 246 BCE to 210 BCE. In his 35-year reign, he managed to create magnificent and enormous construction projects. He also caused both incredible cultural and intellectual growth, and much destruction within China. Whether he should be remembered more for his creations or his tyranny is a matter of dispute, but everyone agrees that Qin Shi Huang, the first emperor of the Qin Dynasty, was one of the most important rulers in Chinese history.

According to legend, a rich merchant named Lu Buwei befriended a prince of the Qin State during the latter years of the Eastern Zhou Dynasty (770-256 BCE). The merchant’s lovely wife Zhao Ji had just gotten pregnant, so he arranged for the prince to meet and fall in love with her.

She became the prince’s concubine, and then gave birth to Lu Buwei’s child in 259 BCE. The baby, born in Hanan, was named Ying Zheng. The prince believed the baby was his own. Ying Zheng became king of the Qin state in 246 BCE, upon the death of his supposed father. He ruled as Qin Shi Huang, and unified China for the first time.

The young king was only 13 years old when he took the throne, so his prime minister (and probable real father) Lu Buwei acted as regent for the first eight years.

This was a difficult time for any ruler in China, with seven warring states vying for control of the land. The leaders of the Qi, Yan, Zhao, Han, Wei, Chu and Qin states were former dukes under the Zhou Dynasty, but had each proclaimed themselves king as the Zhou fell apart. In this unstable environment, warfare flourished, as did books like Sun Tzu’s The Art of War. Lu Buwei had another problem, as well; he feared that the king
would discover his true identity.

According to the Shiji, or “Records of the Grand Historian,” Lu Buwei hatched a new scheme to depose Qin Shi Huang in 240 BCE. He introduced Zhao Ji to Lao Ai, a man famed for his large penis. The queen dowager and Lao Ai had two sons, and in 238 BCE, Lao and Lu Buwei decided to launch a coup. Lao raised an army, aided by the king of nearby Wei, and tried to seize control while Qin Shi Huang was traveling outside of the area. The young king cracked down hard on the rebellion; Lao was executed in a grisly fashion, along with his family. The queen dowager was spared, but spent the rest of her days under house arrest.

Lu Buwei was banished after the Lao Ai incident, but did not lose all of his influence in Qin. However, he lived in constant fear of execution by the mercurial young king. In 235 BCE, Lu committed suicide by drinking poison. With his death, the 24-year-old king assumed full command over the kingdom of Qin. Qin Shi Huang grew increasingly paranoid (not without reason), and banished all foreign scholars from his court as spies. The king’s fears were well-founded; in 227, the Yan state sent two assassins to his court, but he fought them off with his sword. A musician also tried to kill him by bludgeoning him with a lead-weighted lute.

The assassination attempts arose in part because of desperation in neighboring kingdoms. The Qin king had the most powerful army, and neighboring rulers trembled at the thought of a Qin invasion. The Han kingdom fell in 230 BCE. In 229, a devastating earthquake rocked another powerful state, Zhao, leaving it weakened. Qin Shi Huang took advantage of the disaster, and invaded the region. Wei fell in 225, followed by the powerful Chu in 223. The Qin army conquered Yan and Zhao in 222 (despite another assassination attempt on Qin Shi Huang by a Yan agent). The final independent kingdom, Qi, fell to the Qin in 221 BCE.

With the defeat of the other six warring states, Qin Shi Huang had unified northern China. His army would continue to expand the Qin Empire’s southern boundaries throughout his lifetime, driving as far south as what is now Vietnam. The king of Qin became the Emperor of Qin China.

As emperor, Qin Shi Huang reorganized the bureaucracy, abolishing the existing nobility and replacing them with his appointed officials. He also built a network of roads, with the capital of Xianyang at the hub. In addition, the emperor simplified the written Chinese script, standardized weights and measures, and minted new copper coins.

The Great Wall and Ling Canal:

Despite its military might, the newly unified Qin Empire faced a recurring threat from the north: raids by the nomadic Xiongnu (the ancestors of Attila’s Huns). In order to fend off the Xiongnu, Qin Shi Huang ordered the construction of an enormous defensive wall. The work was carried out by hundreds of thousands of slaves and criminals between 220 and 206 BCE; untold thousands of them died at the task. This northern fortification formed the first section of what would become the Great Wall of China. In 214, the Emperor also ordered construction of a canal, the Lingqu, which linked the Yangtze and Pearl River systems.

The Warring States Period was dangerous, but the lack of central authority allowed intellectuals to flourish. Confucianism and a number of other philosophies blossomed prior to China’s unification. However, Qin Shi Huang viewed these schools of thought as threats to his authority, so he ordered all books not related to his reign burned in 213 BCE. The Emperor also had approximately 460 scholars buried alive in 212 for daring to disagree with him, and 700 more stoned to death. From then on, the only approved school of thought was legalism: follow the emperor’s laws, or face the consequences.

As he entered middle age, the First Emperor grew more and more afraid of death. He became obsessed with finding the elixir of life, which would allow him to live forever. The court doctors and alchemists concocted a number of potions, many of them containing “quicksilver” (mercury), which probably had the ironic effect of hastening the emperor’s death rather than preventing it. Just in case the elixirs did not work, in 215 BCE the Emperor also ordered the construction of a gargantuan tomb for himself. Plans for the tomb included flowing rivers of mercury, cross-bow booby traps to thwart would-be plunderers, and replicas of the Emperor’s earthly palaces.

To guard Qin Shi Huang in the afterworld, and perhaps allow him to conquer heaven as he had the earth, the emperor had a terracotta army of at least 8,000 clay soldiers placed in the tomb. The army also included terracotta horses, along with real chariots and weapons. Each soldier was an individual, with unique facial features (although the bodies and limbs were mass-produced from molds).

The Death of Qin Shi Huang:

A large meteor fell in Dongjun in 211 BCE – an ominous sign for the Emperor. To make matters worse, someone etched the words “The First Emperor will die and his land will be divided” onto the stone. Some saw this as a sign that the Emperor had lost the Mandate of Heaven. Since nobody would fess up to this crime, the Emperor had everyone in the vicinity executed. The meteor itself was burned and then pounded into powder. Nevertheless, the Emperor died less than a year later, while touring eastern China in 210 BCE. The cause of death most likely was mercury poisoning, due to his immortality treatments.

Fall of the Qin Empire

Qin Shi Huang’s Empire did not outlast him long. His second son and Prime Minister tricked the heir, Fusu, into committing suicide. The second son, Huhai, seized power. However, widespread unrest (led by the remnants of the Warring States nobility) threw the empire into disarray. In 207 BCE, the Qin army was defeated by Chu-lead rebels at the Battle of Julu. This defeat signaled the end of the Qin Dynasty. 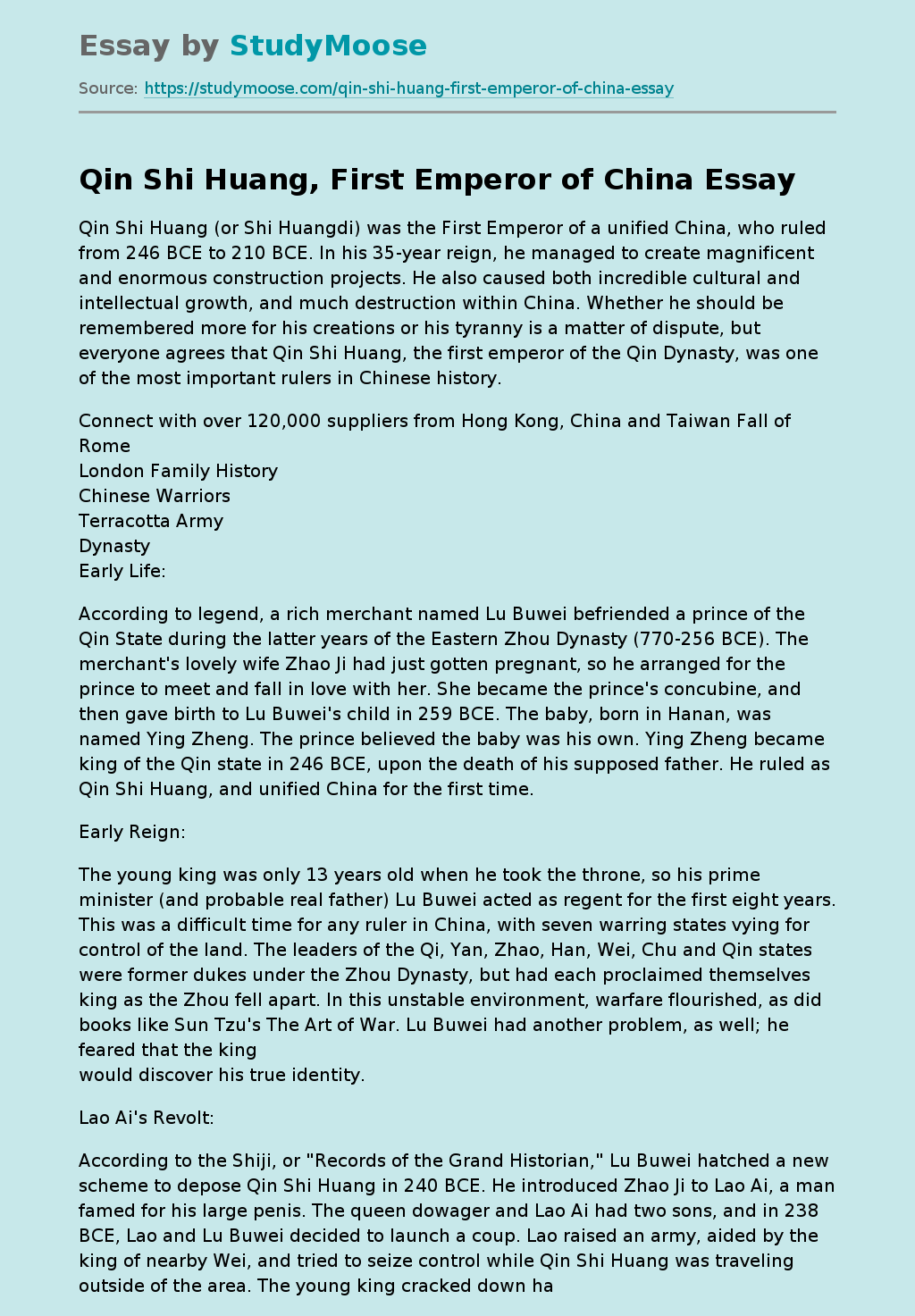