When the Emperor Was Divine by Julie Otsuka

In “When the Emperor Was Divine”, Julie Otsuka uses syntax, childlike tone, and evocative imagery to show the relationship between the father and the son affecting the boy’s coming of age. The author uses syntax to portray the experiences of the father by using repetition. The son’s coming of age is affected by this through the passing of knowledge gained by these experiences. Throughout the passage. Repetition of sentences beginning with “He knew” depict the knowledge the father has gained through his past experiences.

Don't use plagiarized sources. Get your custom essay on
“ When the Emperor Was Divine by Julie Otsuka ”
Get custom paper
NEW! smart matching with writer

The boy learns from these and develops his own sense of understanding of the world that is mainly influenced by his father.

This is significant to the reader because it focuses on the fact that the father is no longer around to share new experiences. These memories of having his father teach him about the world is all he has left of his father. The tone of the author is crucial to how the reader understands the father.

In the passage, Otsuka uses a youthful voice that is likely used to reveal the way the boy sees his own father.

The speaker views certain things the father does as amazing. He says he wore beautiful suits, never yelled at waiters, and always closed the door so softly as he exited a room. These are things that might be viewed as mundane or rather unimpressive by adults whereas to a child, they seem fascinating. This youthful and energetic tone displays to the reader how the child’s coming of age is affected by his father. The evocative imagery of the father’s daily routines is used by the author to step into the boy’s shoes and look at the father through the boy’s eyes.

This creates a childlike effect on the way the reader views the father as a character. Throughout the passage, Otsaku uses words such as “beautiful” and “soft” which are simple words a child might use to describe something that fascinates them. The boy is fascinated by his father and this influences the way the boy grows up. These perceptions from the boy are significant in that they reveal what he admires about the man he once knew as his father.

By using syntax, tone and evocative imagery, Julie Otsaku tells the story of the relationship of this Japanese-American family by creating an environment that portrays the world as the boy sees it. Because of this, the reader recognizes the significance of the boy’s memories of his father and how it reflects the father’s own experiences. These nostalgic memories from the boy are present to encourage the reader to relate to their own childhood and examine the importance of family relationships.

When the Emperor Was Divine by Julie Otsuka. (2017, Jan 21). Retrieved from https://studymoose.com/when-the-emperor-was-divine-by-julie-otsuka-essay 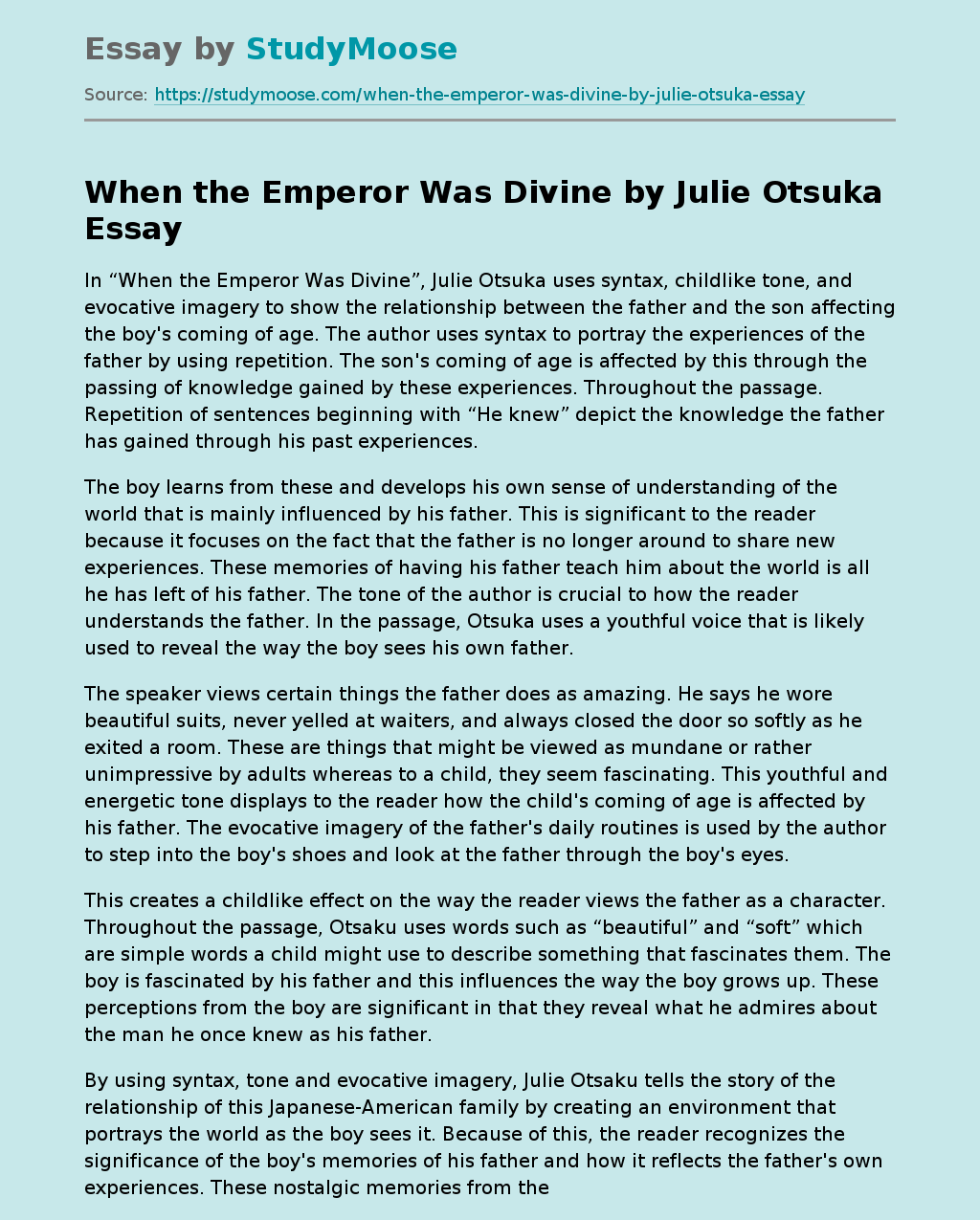