The Influence and Use of Kinetic Imagery on the Identity of the Characters in A Midsummer Night's Dream, a Play by William Shakespeare

Imagery is an approach based on the dynamics of art and literature that integrates visual and kinaesthetic elements in different stages within the writing process. Imagery is meant to give form to the play’s themes, motifs and symbols. Imagery can be further divided into: tactile, auditory, caloric, olfactory and kinetic imagery. The latter involves the sum of all movements realized during the play.

A Midsummer Night’s Dream is a comedy in five acts, first written in 1595, which was meant to be played at The Nuptial Festival.

Don't use plagiarized sources. Get your custom essay on
“ The Influence and Use of Kinetic Imagery on the Identity of the Characters in A Midsummer Night’s Dream, a Play by William Shakespeare ”
Get custom paper
NEW! smart matching with writer

Although the audience consisted mostly of common people, the play is filled with some pretentious imagery, which could be understood only by an educated/cultivated mind. My essay focuses on the kinetic imagery, which, along with the other types of imagery used in A Midsummer Night’s Dream, helps reveal the main themes of the play (order vs. disorder, love, nature) to the spectator or the reader.

The only one who has a dream is Hermia and this dream is important because, in a particular way, it anticipates the next actions.

HERMIA: Help me, Lysander, help me! do thy best/ To pluck this crawling serpent from my breast!/ Ay me, for pity!-What a dream was here! -Act II, scene 2.

Another classification of the kinetic spaces in A Midsummer Night’s Dream is based on three antinomies: night versus day, city versus forest, and body versus spirit. The first one is strongly related to the second antinomy. In relation to one another, they create a web, which converges the moments of the plot when the characters can get involved. For example, the fairies cannot control the city ruled by Theseus or the actions, which happen during the day. But these alone could not define the play as being a dynamic one, if it were not expressed by the key antinomy of the kinetic image of body-spirit. Regarding this last dichotomy, there must be mentioned that at the physical level, the movements do not seem to be remarkable. The space in which the characters move is limited: the city of Athens and the forest nearby. The only one who suffers some physical transformations (=movements) is Bottom, who receives an ass (donkey) head. This transformation does not have any purpose in itself but it is performed as a hilarious means to mock Titania. Remarkable are the movements within the spiritual level, where the majority of the protagonists, controlled or uncontrolled, affected directly or indirectly by the intervention of the fairies, change the before-hand planned intentions. The origin of all these inner movements is the play’s quintessence, the magical herb.

Two of the characters who are the most influenced by the magical herb are Demetrius and Titania. The fairy queen can be regarded as the source of this chaos planned by her husband, Oberon, the fairy king, but unpleasantly put in action by Puck. Disregarding the wish of Oberon to have the Indian boy, and disregarding the fact that she should obey her husband (OBERON: Tarry, rash wanton: am not

thy lord? Act I, Scene 2), she refuses to hand over the changeling, without thinking even for a moment at Oberon’s proud and stubborn personality. In a way, it can be said that, through her own stubborn attitude, she forces Oberon to resort to harsh methods. The fairy king receives from Puck, his goblin servant, Cupid’s magic herb, which he uses to enchant his wife in order to fall in love with the first being that she sees. This being is carefully chosen. In order to create the ridiculous – hilarious situation, she first sees an ass-headed human named Bottom. 7 RESEARCH Shakespeare chose the donkey figure because it is the ultimate symbol of the freedom of mind (French originated idea) and he also chose a common man, at the Bottom of society because, only by combining these two elements, humans can enter and see the fairy world. Titania’s love is almost unbelievably blind and she totally surrenders into the arms of her new lover (TITANIA: I pray thee, gentle mortal, sing again; Mine ear is much enamour’d of thy note. So is mine eye enthralled to thy shape – Act III, scene 1).

Taking advantage of Titania and her lover’s blissful ignorance, Oberon gets the control over the changeling and afterwards he releases Titania from the love enchantment. Somehow, in this great chaos, the fairy couple finds a type of order: Titania’s identity remains unchanged (her social status, her debts are the same); without any remorse, she reunites with Oberon and goes to bless the marriage of Theseus and Hyppolita. This can be understood only from the point of view of their immortal world. Mistakes can be made and they can be forgiven easily based on the idea that life depending problems do not exist.

Demetrius is the mortal, who undergoes the most notable transformation. Being convinced that Hermia belongs to him, although he is loved by Helena (whom he almost hates: DEMETRIUS: Tempt not too much the hatred of my spirit/ For I am sick when I do look on thee – Act II, scene 1), he enters the magical world from the forest determined to obtain her at any cost, but he comes across the fairies. The fairies totally change the course of Demetrius’ actions in order to bring justice to Helena’s cause (she herself becoming a “goddess, nymph, perfect, divine!”). Although Demetrius is destined from the beginning to be bewitched, Puck commits a mistake, and Lysander becomes himself Helena’s false lover. In the end, it can be said that Demetrius wins this twisted battle due to an absurd game understood only by the fairies and, at the same time, due to humanity’s ignorance (because nobody doubts Demetrius’ feelings for Helena). This act reveals one of the play’s comic climaxes and the unanimous need for a happy ending.

The junction between different subplots and different worlds highlights the different realities involved in each of these features. Dreams and various perspectives serve as methods to explain the different characteristics of the diverse realities. Each reality is connected to its beholder and therefore explains how he visualizes it in connection to his circumstances

In conclusion, it can be said that A Midsummer Night’s Dream is a very dynamic play from the point of view of its kinetic imagery, beautifully displayed throughout the entire play; not only for its unique perspective, but also for its complexity and its frames. We can be led to the idea that the general movement obliges the characters to revolve around the main themes and to join forces in creating the delightful comedy created under the keen eye of the Shakespearean mind.

The Influence and Use of Kinetic Imagery on the Identity of the Characters in A Midsummer Night's Dream, a Play by William Shakespeare. (2021, Sep 21). Retrieved from https://studymoose.com/the-influence-and-use-of-kinetic-imagery-on-the-identity-of-the-characters-in-a-midsummer-night-s-dream-a-play-by-william-shakespeare-essay 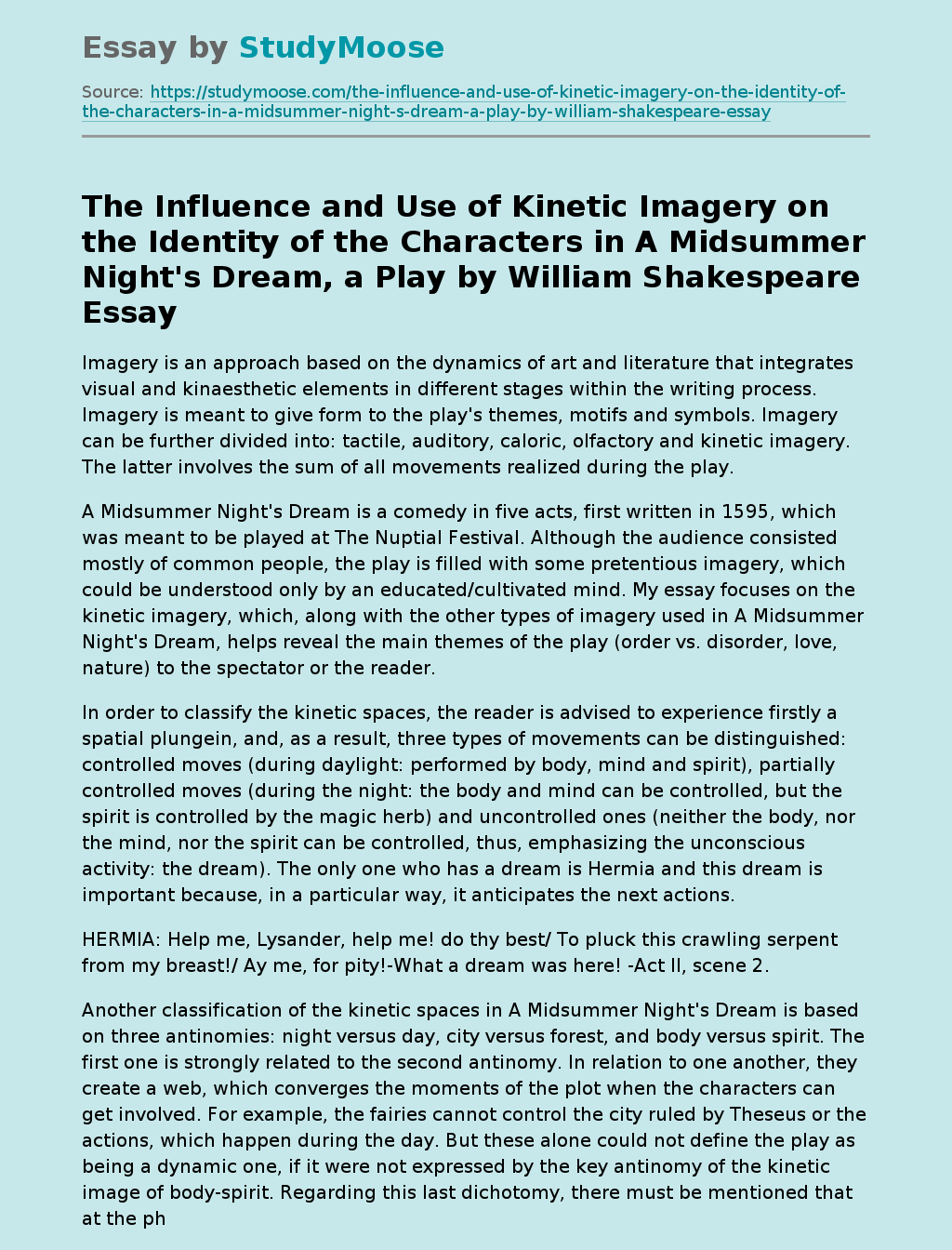