The Importance of Nonverbal Communication in Sports

Turn in your highest-quality paper
Get a qualified writer to help you with
“ The Importance of Nonverbal Communication in Sports ”
Get high-quality paper
NEW! AI matching with writers

These sports range from baseball coaches using signs to tell the runner when to steal, all the way over to Romania where they compete in “hammer throwing” competitions. Communicating nonverbally in sports is just as important as communicating verbally by using gestures and body movement instead of speaking and using words. Nonverbal communication between athletes and coaches is important for team success in all different sports.

The game of baseball is a great example of a sport that uses nonverbal communication every single play.

The game of baseball is almost ruled by the signs and signals it uses. “People routinely communicate more information through nonverbal behaviors than they do through spoken language” (Floyd, 2013, p. 104). One of the most common nonverbal communication usages in sports is between the pitcher and catcher on what pitch to throw. Before the pitch is thrown every play, the catcher will use finger gestures and call specific pitches to the pitcher by putting down a certain number of fingers in a certain order.

The pitcher then decodes the message on what pitch he needs to throw and confirms the call from the catcher with a nod or declines the pitch with a “headshake” and the catcher calls a new pitch. It is extremely important that the right pitch is called for the right pitch count, for example, if it’s a full count with three balls and two strikes the pitcher knows that if he throws the wrong pitch he could walk the batter or the batter can get a hit off of him, when his goal is to strike the batter out. The third base coach communicates to the batter and base runner at the same time with a series of coded hand gestures.

Gestures are used by the third base coach to let the base runner know if he wants him to lead off the plate more or steal the base behind the pitchers back. Gestures are also used by the third base coach to tell the batter if he wants him to bunt, take a pitch, or just take a big swing at the ball. “Examples of the third base coach’s body gestures to call a play include: wiping a hand across the chest, touching the belt or rim of the hat with a specific hand, or wiping a hand down a specific arm” (Goldberg, 2010). If the batter or runner doesn’t pick up the coded sequence, the play will usually result in a strike out or the base runner misses the chance to steal a base. As you can see, nonverbal communication is extremely important in the game of baseball. However, it is not the only sport that uses nonverbal communication almost every single play.

Football teams use nonverbal communication every single game they play. The most used nonverbal communication in a football game is at the line of scrimmage before the ball is snapped. The quarterback tries to read or guess what the defense is going to do; if they are going to blitz or if they are doing a certain defense. Depending on what the quarterback thinks, he will use common nonverbal signals and gestures to communicate to the receivers, running backs, or tight ends. To indicate which receiver should be sent in motion from one side of the field to the other, the quarterback will either tap his left or right foot or tap the left or right side of the centers leg to the let the receiver know which way to go. The receiver will then move in motion towards the other side of the field to set up and wait for the quarterback to hike the ball. “To get the center to hike the ball, in shotgun formation, the quarterback will use a “silent snap” by tapping his foot on the ground” (Goldberg, 2010). As you can see, nonverbal communication can come in handy in important clutch game situations. However, there are still many other sports around the world that use this form of communication between players.

All across the world sports teams use nonverbal communication to there advantage. Statistics show that in Romanian hammer throwing competitions the athletes communicate 66% nonverbally and the coaches communicate 75% nonverbally (Rata, 2012). Coaches always have to replace verbal communication with nonverbal communication when distance is a big factor or when they don’t want the opposing team to know what they are going to do next. People always see the coaches on the sidelines calling certain plays in close game situations by using secretive gestures that players have specifically been told beforehand. “In basketball, players gaze one direction but shoot or pass the ball in the other direction to fake out the opponent guarding them” (Kunde, 2011). Nonverbal communication is also important in volleyball between the players. “The attackers have to read the setter’s body language to know which side of the court the ball is being passed to so that the attacker can make a play and spike the ball for a point” (Raiola, 2011). Overall, you can see that nonverbal communication is important for team success in all different types of sports.

The Importance of Nonverbal Communication in Sports. (2016, Mar 11). Retrieved from http://studymoose.com/the-importance-of-nonverbal-communication-in-sports-essay 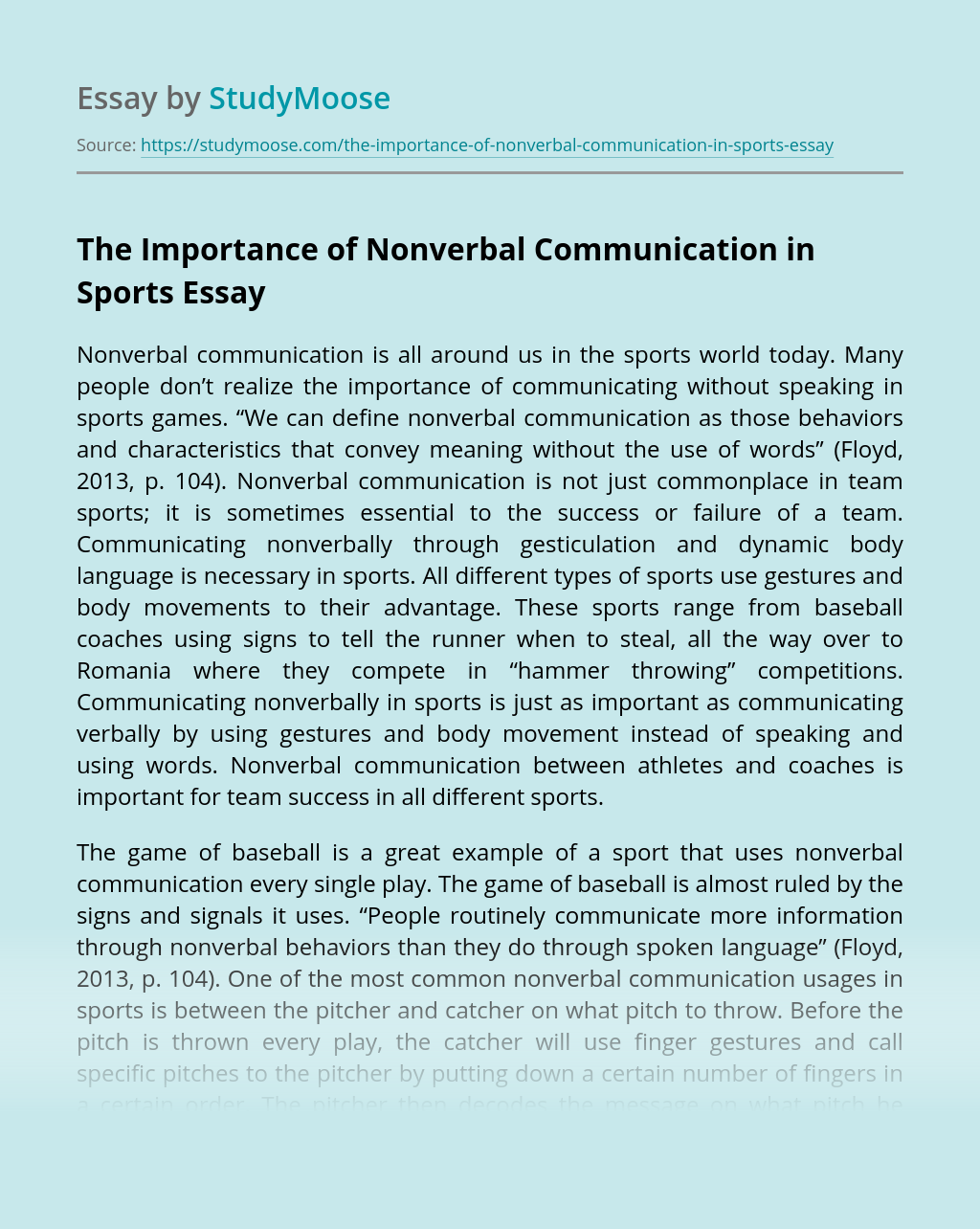 Turn in your highest-quality paper
Get a qualified writer to help you with
“ The Importance of Nonverbal Communication in Sports ”
Get high-quality paper
Helping students since 2015
Stay Safe, Stay Original