The Impact Of Sports On Academic Achievement

Participating in sports and maintaining a good academic performance is a difficult task for many student athletes. Most parents believe that active involvement in sports and games may affect the studies and hinder the professional career of their children.

Don't use plagiarized sources. Get your custom essay on
“ The Impact Of Sports On Academic Achievement ”
Get custom paper
NEW! smart matching with writer

Parental pressure to prioritize education and concentrate more on academics rather than in athletic activities are common among youngster with exceptional skills in sports.

Only a few number of parents may be aware of the positive effects of sports in the academic performance of their children. The arguments on the positive and negative outcomes that will be gained through participation in sports will always exist among those who view the student athletes as underachievers and incapable of balancing sports and school performance and those who believe that these young athletes have both the ability to face the academic challenge and excel in sports.

This paper will show the positive and negative impact of sports on academic achievement among students in the high school and college level.

Exercise has been noted to increase performance on cognitive tasks (Nash, 1996). In addition to the health benefits of exercise, most athletes maintain an exercise regimen to increase strength and reduce sport-related injuries (Sothern, Loftin, Suskind, Udall, & Blecker, 1999). They perform physical activities that involve strengthening and stretching exercises. Those who are engage in sports get more exercise and those who are getting more exercise are more likely to be engaged in sports (Field, et al, 2001). It was also discovered that students with a high level of exercise had higher grade point average than students with a low level of exercise (ibid.

Jin; Pivarnik, an exercise physiologist at Michigan State University, recently found that teens who regularly engaged in vigorous exercise scored higher grades than their peers in core classes such as Science and English (Norland, 2006). Pivarnik defined vigorous activity as one that significantly increases the heart rate and causes a person to breathe harder, like playing soccer or skateboarding (ibid.).

In the research made by the American College of Sports Medicine, it was discovered that the most active kids more often have better grades and children who participate in vigorous physical activity, such as sports, perform better in school (Medicine and Science in Sports and Exercise, 2006; Medical News Today, 2008). The most active students who performed better academically participate in sports such as soccer, football, basketball and baseball, and softball or other vigorous activity outside the classroom at least three times a week (ibid.).

The Journal of Sports and Exercise Physiology found evidence that regular physical activity supports learning (Etnier, et al., 1997) as students in California schools experience smaller gains in SAT-9 test scores than schools with more active students (Hanson & Austin, 2003). It was also discovered that at each of the three grade levels measured, higher achievement was associated with high levels of fitness and that physical activity had beneficial effect on academic progress in both low- and high- performing schools regardless of location or socio-economic status (ibid.).

There were also evidences that schools offering intense physical activity programs have seen positive effects on test scores in mathematics, reading and writing (Symons, et al., 1997) which led the American Academy of Pediatrics to issue a policy statement on the need for the expansion of school physical education (Council on Sports Medicine and Fitness and Council on School Health, 2006). This is a clear evidence of the connection between physical activity and academic achievement.

Although there are findings that physical activities contribute to academic achievement, some research studies have shown that the time devoted to athletic practice and competition compel student athletes to sacrifice attention to academics (Meyer, 1990; Parham, 1993), making it difficult for them to allocate time to study or earn good grades (Cantor & Prentice, 1996). More commitment to the athletic role and less to academics lead to lower grade point averages in college (Simons, et al, 1999). The admission advantage given to recruited athletes enable them to enter college with less impressive academic records (Hood, et al, 1992; Purdy, et al, 1985; Shulman & Bowen, 2001; Stuart, 1985).

The study made by Aries, et al (2004) revealed that high-commitment athletes who devoted over 10 hours a week to the athletic teams’ participation had lower verbal SAT scores, lower math SAT scores, and lower self-assessments of their academic skills, in particular, their writing and foreign language skills compared to the non-athletes at two highly selective Northeastern schools, an Ivy League university and a small liberal arts college. There was no evidence that the athletes devoted less time to studying, that they were any less ambitious, grade conscious, or concerned about the future than non-athletes (ibid.).

The motivation for academic success while engaging in sports was strengthened by Snyder and Spreitzer (1990) who cited several reasons that sports may promote academic achievement, including increased interest in school, the need to maintain good grades to stay eligible, boosts to one’s self-concept, increased attention from adults like teachers and coaches, membership with others who are academically oriented, and expectations to play college sports. However, some studies found that the effects of sports participation on students’ achievement vary, depending on the racial and class characteristics of the participants and that sports participation positively contributed to the achievement of the whites and middle-class males group but do not have any significant influence on the educational outcomes of those in lower-socioeconomic strata youths and minorities (Melnick et al. 1992; Melnick, et al, 1988; Messner, 1990; Sabo et al. 1993).

In a similar study, Eitle and Eitle (2002) found that based on the measure of test performance, the participation in football and basketball had a negative effect on academic achievement regardless of the race of the student which implies that cultural disadvantage may contribute to an increased interest in particular sports and that this interest in sports may have adverse consequences in terms of academic performance.

Pascarella, et al (1995) also found that participation in college sports resulted in a significant difference between male athletes and non-athletes in reading comprehension, mathematical skills, with athletes scoring lower in both areas than non-athletes in the end of freshmen year. Similar results were also shown between male athletes and non athletes in revenue producing sports such as football and basketball and both athletes who competed in non-revenue producing sports. In spite of these results, Garrett (2000) indicated that the type of sport in which one participates is not a significant predictor of academic performance.

In the past, the Greeks regarded physical training and games as a form of knowledge to strengthen the body and to temper the soul (Simon, 1985). Excellence in sports is related to bodily-kinesthetic, one of the seven modes of intelligence identified by the Harvard Psychologist Gardner (1983) in the book, Frames of Mind: The Theory of Multiple Intelligences.

There are studies indicating that the participation in school sports raises students’ grades and test scores (Broh, 2002) and students who participated in at least one sport each year had better class rank, overall GPA, and math GPA than those who do not participate in any sport (Stephens & Schaben, 2002). In the same study, the authors also discovered that the students who participated in more sports for many seasons had a higher level of scholarship than those who had competed in only a few seasons or for only one year (ibid.).

Due to the belief that sport and education can be beneficial for student success in all aspects of their lives (Griffin, 1991; Leonard, 1974), the Promoting Achievement in School through Sport (PASS) program was establish as a credit bearing elective course for middle and high school boys and girls. One of the goals in the PASS curriculum is to improve academic performance in addition to the development of interpersonal skills, character, confidence and management skills, critical thinking, planning, problem solving, team work and time management skills.

Their curriculum is also based on the premise that the principles and skills that propel students to excel in sports can contribute to academic success (Kirsch, 2002). The teachers in collaboration with the American Sports Institute (ASI) were trained to implement the program and curriculum. After five years, the American Sports Institute (1998) reported that the 680 PASS students have consistently outperformed the non-PASS students in the overall GPA on the basis of gender, ethnicity and grade level. This only shows the positive impact of sports in relation to the academic achievement of students in the middle and high school levels.

There are mixed evidences on the impact of sports on academic performance. Some may lean on the positive (Prasad, 2007; Norlander, 2006; Kirsch, 2002; Stephens & Schaben, 2002; American College of Sports Medicine, 2006; Snyder & Spreitzer, 1990) while others may lean on the negative impact (Meyer, 1990; Parham, 1993; Cantor & Prentice, 1996; Simons, et al, 1999; Aries, et al, 2004; Eitle & Eitle, 2002; Pascarella, et al, 1995). The influence of sports on educational achievement will continuously be the subject of debate unless a direct cause can point to whether involvement in sports will improve academic performance or whether intelligence can lead to success in sports. More researches need to be undertaken to establish the relationship between sports, physical activity and academic performance.

The Impact Of Sports On Academic Achievement. (2017, Apr 03). Retrieved from https://studymoose.com/the-impact-of-sports-on-academic-achievement-essay 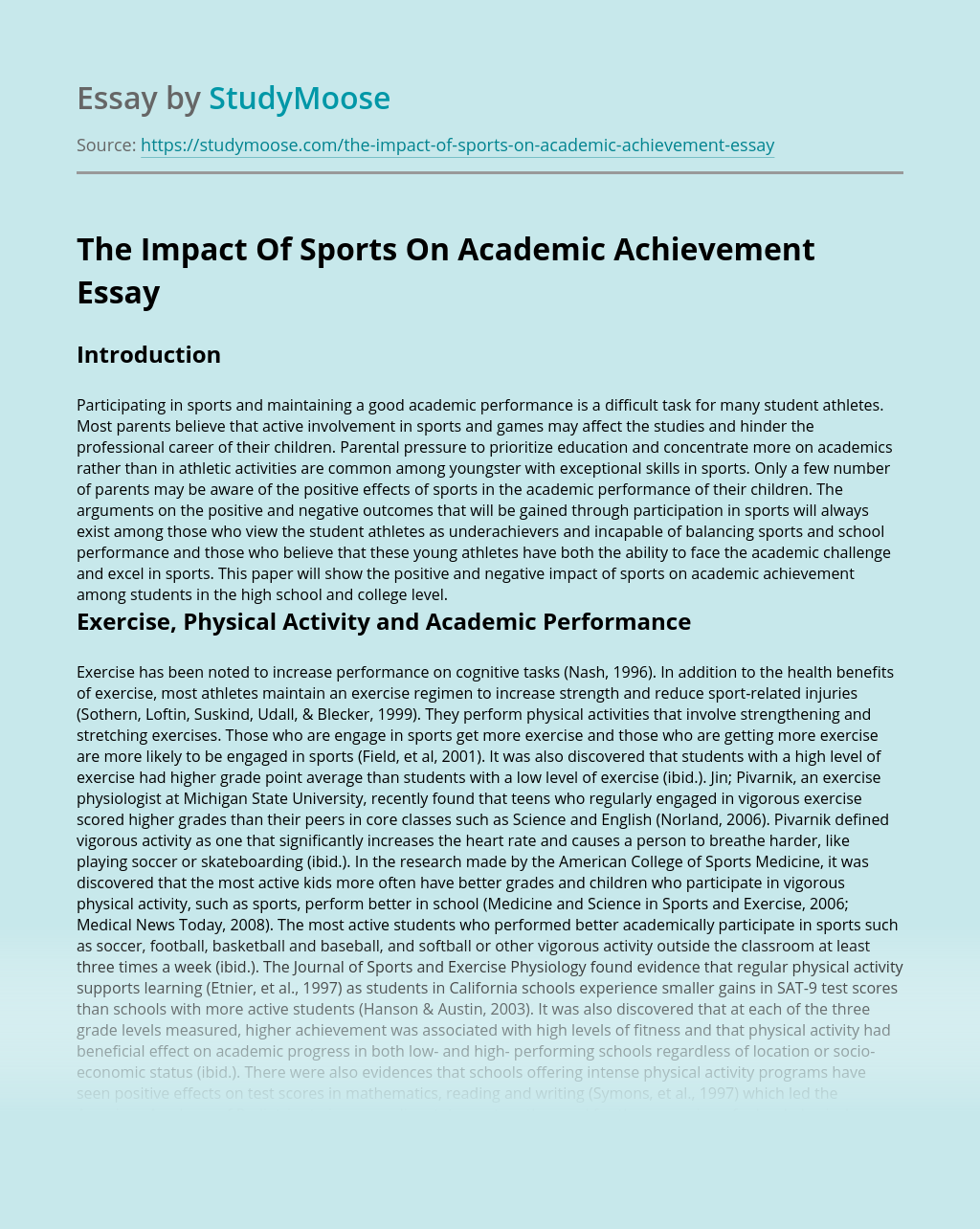