Don't use plagiarized sources. Get your custom essay on
“ Sports and Academic Achievement ”
Get custom paper
NEW! smart matching with writer

Participating in athletics offers students the opportunity to learn valuable lessons they can use for the rest of their lives. Some lessons include teamwork, self-esteem, perseverance, discipline, time management, and healthy living. However, these lessons are not the only lessons a student learns. Students also learn lessons that carry over into the classroom and have a positive impact on academic achievement. These lessons include increased memory, diligence, time management, and memory capacity which can be supported by scientist that have researched the impact of physical activity on the brain.

These studies have concluded that exercise causes “neurogenesis”, the process of growing cells in the brain therefore, increasing memory and learning capacities (Blaydes, 2011). The National Federation of State High School Associations in their 2008, “The Case for High School Activities” article shows that the return on investment on athletic programs and other extracurricular activities is very high.

“At a cost of only one to three percent (or less in many cases) of an overall school’s budget, high school activity programs are one of the best bargins around.

One of the measurements of academic success is grade point averages. High grade point averages indicate one’s diligence, perseverance and desire to succeed. Students who participate in athletics have higher GPA’s than students who do not participate in athletics. The 2002 study conducted by Schaben and Stevens of middle school students showed that students who participated in athletics had an average GPA of 3.15 compared to nonathletic students which carried an average GPA of 2.4 (p. 38). Another study of high school students by Stegman and Stephens (2000) found that both male and female students that had low athletic participation carried lower GPA’s.

Graduation Rates of athletes vs. non-athletes

One objection to the impact that athletics has on academics success is a study showing that non-athletes have higher ACT/SAT scores. In the 1997 Chronicle of Education article by Jim Naughton, students that did not participate in athletics had higher ACT scores (average 21+) than students who did participate in athletics (average of 19) (p. A44). In the study of high school seniors in Eastern Tennessee (2010, Gorman, p. 80) recorded no significant difference in ACT scores between participating and non-participating students. This objection disputes the findings that athletes have more academic success than non-athletes.

As the studies have shown, the impact of athletics isn’t just physical. “Interscholastic sports also promote life skills and lessons and enhance academic performance” (Lumpkin & Stokowski, 2011). Those lessons carry over in the classroom and boost grade point averages, as well as the scores of Math and English. It has been found that athletic students have a higher frequency of graduation and continue on to higher education than non-athletic students. Students who participate in athletics have more academic success than students who do not participate in athletics. 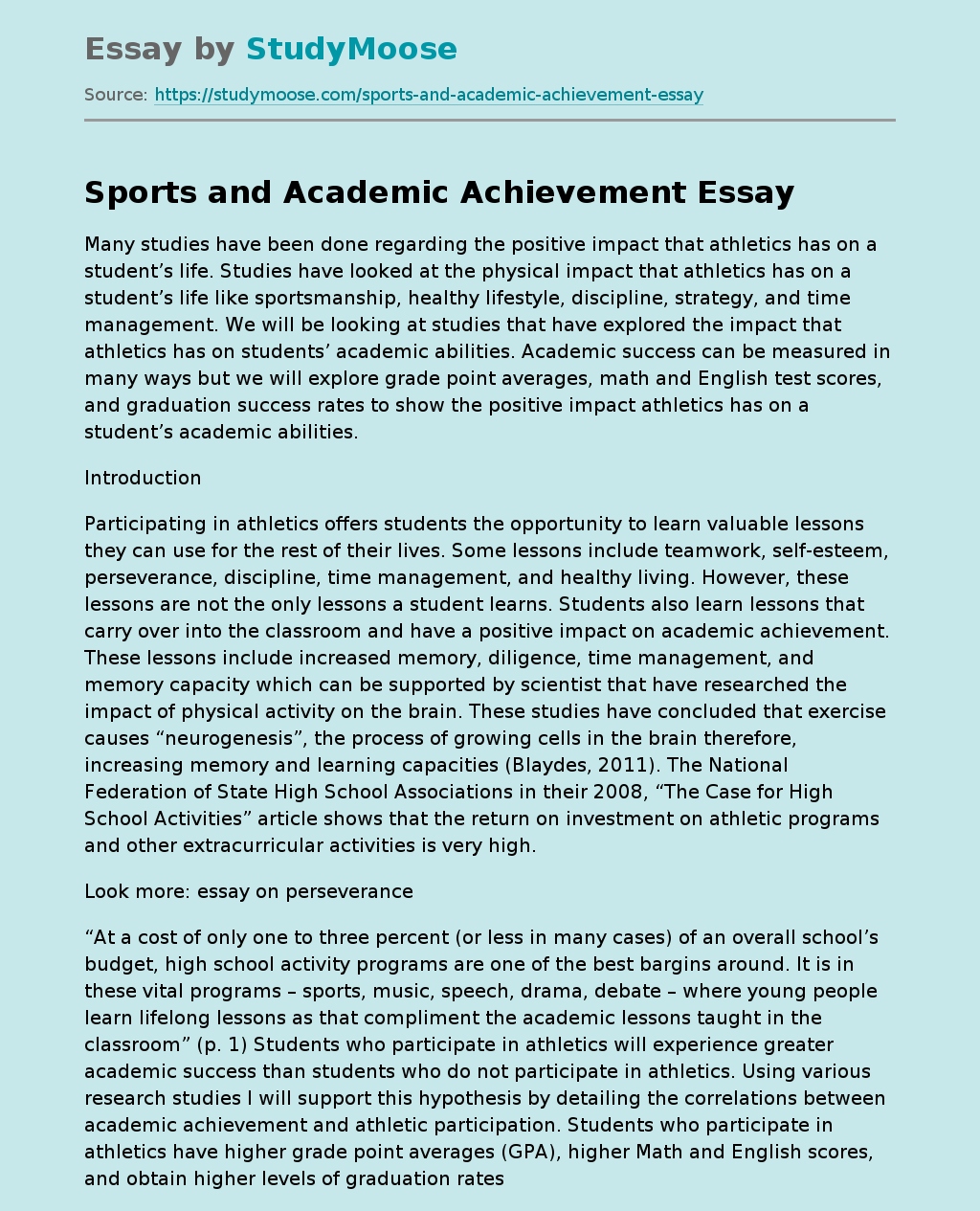