“The Highwayman” by Alfred Noyes

“The Highwayman” by Alfred Noyes is an exciting and dramatic poem about love and betrayal. The variety of imagery Noyes uses creates an mood, sets the scene and gives you a clear picture in your head of what the characters look like and also gives you a better sence of the noises you would hear. This makes the poem easier to understand and much more enjoyable for the reader. “The Highwayman” takes place in the midevil days and tells the story of a man who robs people.

This crook does not have a name and is known as “the highwayman”. He is wealthy as the Noyes describes;“He’d a French cocked-hat on his forehead, a bunch of lace at his chin, A coat of claret velvet, and breeches of brown doe-skin”. The highwayman has a secret love her name is Bess, and she is the landlord’s daughter. The ostler at the Inn, Tim, is also in love with Bess.

He is envious of the highwayman and tells the soldiers where and when they can get him. The soldiers set up a trap but, Bess dies while trying to warn him about the soldier waiting for him. Hearing the shot, the highwayman rides back to the Inn where he too, is shot down.

The poem ends with the impression that the ghosts of the two lovers still be heard on dark rainy nights. There are four main themes in the poem, love, betrayal, loyalty and death. Love is shown when Bess killed herself trying to warn her lover that he was in danger.

Betrayal is shown when the ostler went to the soldiers and told them how they could capture the highwayman. Loyalty is revealed when the highwayman risked his own life by riding down to the Inn to see if Bess was ok.The theme of death is shown when Bess killed herself to warn the highwayman. In this poem, Noyes uses many different types of imagery such as simile, metaphor, and onomatopoeia. Noyes uses simile to help create a clear picture of the characters, an example of simile is: “Her face was like a light.

”This simile is effective because it tells you Bess’ facial expression and what type of mood she is in. Anouther simile Noyes used to show what the ostler looked like was: “His hair like moldy hay.” This tells you that his hair was dirty, messy it was so bad it was starting to look like mold. The poet uses metaphor at the beginning of the poem to make an atmosphere and set the scene, an example of a metaphor is: “The moon was a ghostly galleon.” The metaphor is effective because it creates an spooky atmosphere.Another metaphor Noyes uses to create an eerie atmosphere is: “The wind was a torrent of darkness.”

Noyes uses onomatopoeia to tell you what noise is being made, an example of this is: “clattered” This tells you what the noise sounded like and gives you that the noise was loud. Another use of onomatopoeia used by Noyes to tell the sound is: “Tlot-tlot.” This is effective because most people can relate that noise to a horse galloping. As you can see the poet of “The Highwayman” uses a variety of imagery which include simile, metaphor, onomatopoeia. The imagery plays a big part in this poem as it makes it easier to understand. My favorite theme in the poem is loyalty, even thought it was dangourous the highwayman went to the Inn after the gun shot to see if Bess was ok. As a whole I enjoyed “The Highwayman” because it was fairly easy to understand and it told a story with a lot of action in it.

“The Highwayman” by Alfred Noyes. (2017, Feb 04). Retrieved from http://studymoose.com/the-highwayman-by-alfred-noyes-essay 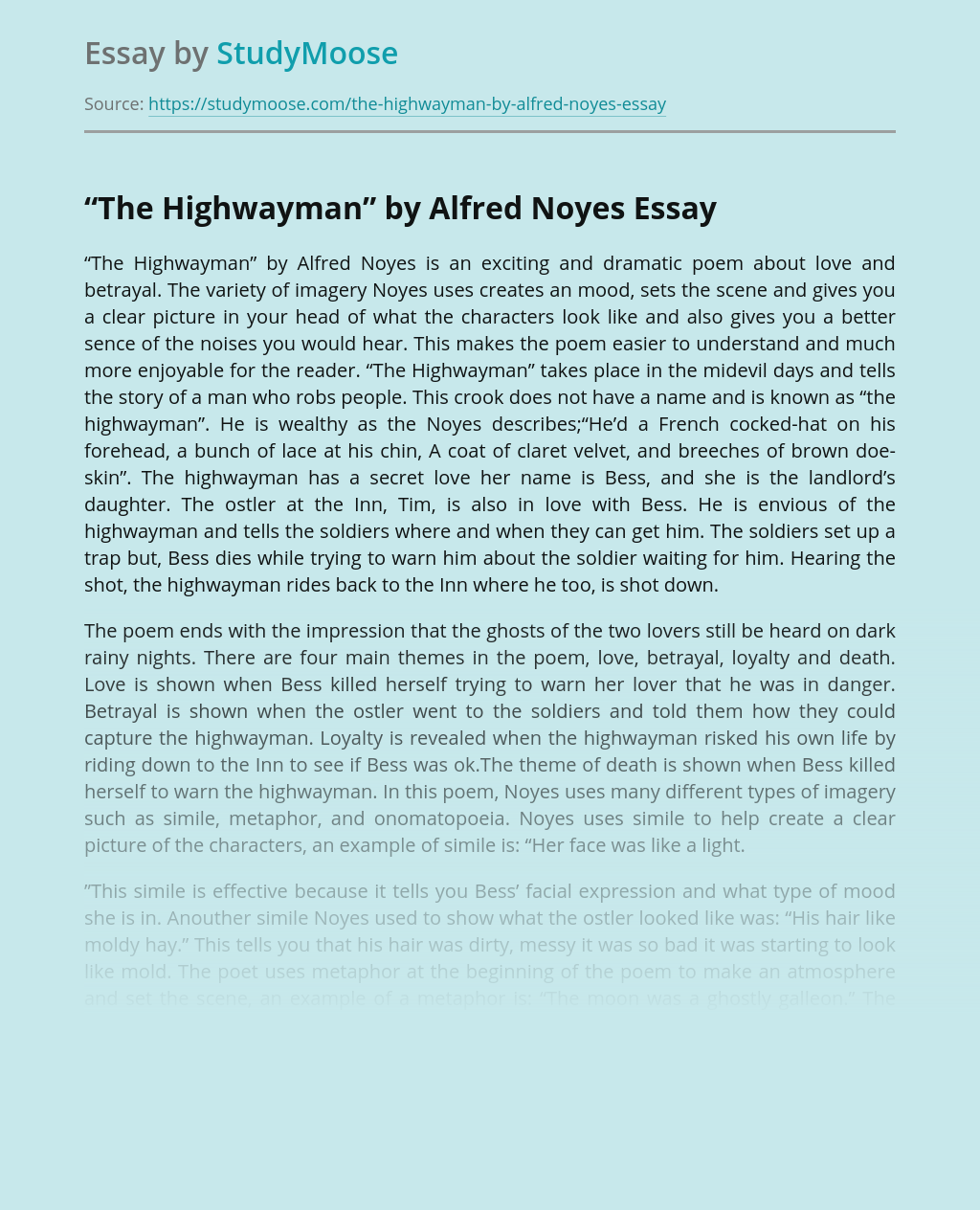 Don’t waste time
Get a verified writer to help you with “The Highwayman” by Alfred Noyes
Hire verified writer
$35.80 for a 2-page paper
Stay Safe, Stay Original