The Great Pyramid of Giza

The greatest accomplishment of all the Seven Ancient Wonders of the World does not need a description by early historians and poets. It does not require conjectures regarding its appearance, size, and shape. This wonder is the oldest of them all and the only surviving one. This great wonder of the ancient world is the Great Pyramid of Giza.

The Great Pyramid of Giza is located on the outskirts of today, Cairo, Egypt, on the west bank of the Nile River.

Don't use plagiarized sources. Get your custom essay on
“ The Great Pyramid of Giza ”
Get custom paper
NEW! smart matching with writer

It was built by the Egyptian pharaoh, Khufu, of the Fourth Dynasty, around 2585-2560 BC. The main purpose of this monument was to serve as a tomb when he died and a source of transportation to his afterlife. The pyramids were built to protect the embalmed, mummified bodies of the Egypt pharaohs for eternity. To build such a great accomplishment for a pharaoh is a grand achievement of the ancient civilization of Egypt.

The building of the pyramid took a total of less than 30 years.

On average, 2.3 million blocks of stone were used to build Khufu’s pyramid, weighed 2.5 tons, and the heaviest blocks, used as the ceiling of Khufu’s burial chamber, weighed in an estimate of 40-60 tons. The pyramid was most likely constructed by approximately 4,000 craftsmen. The question of exactly who built the pyramids, and how, has long been debated by Egyptologists and historians. Theory has it that the stones were hauled up by ramps using ropes of papyrus twine. The gradually sloping ramps, built out of mud, stone, and wood were used as transportation causeways for moving the large stones to their positions up and around the four sides of the pyramid.

The minds of the ancient Egyptians are very impressive considering their advanced engineering skills at such an early stage in time. Even the people of the 21st century still can not determine how they built the Great Pyramid of Giza.

One of the reasons why the Great Pyramid is so overwhelming once it’s seen is because of it’s size and shape. Khufu’s Pyramid was 145.75 meters high, but it lost 10 meters off its top as the years past. Until the modern era, it was the tallest building in the world for over 4 thousand years. The four sides of the Great Pyramid of Khufu are accurately oriented to the cardinal points of the compass. The square base has sides 230 meters long, apparently with a difference between them of only a few centimeters. It is very obvious that the Egyptians were well educated in their sciences and mathematics. It’s amazing how a measurement error on such a massive piece of art can be missed by merely a few centimeters. The shape of the pyramid may have represented the sun’s rays, which the dead king would use as a ramp to the celestial world. On a more superficial level, the huge size of the pyramid symbolized the importance of the pharaoh and his power over the people.

The structure of the Great Pyramid was built based upon geometry. The height of the Pyramid’s apex, or highest point, is 5,812.98 inches, and each side is 9,131 inches from corner to corner. If the circumference of the Pyramid is divided by twice its height then the result is 3.14159, which is Pi. Pi is demonstrated several times throughout the Pyramid. Also, each of the Pyramid’s four walls is measured to be 9,131 inches and 36,524 inches in total. If you move the decimal point over the result is 365.24. This is the exact length of the solar year. The stones on the surface of the Pyramid were cut within 0.01 (1/100th) inch of perfect right angles for all six sides.

They were purposely placed with a gap of 0.02 inch for the glue to hold the stones together. All four sides of the Pyramid are slightly and evenly bowed in or concave. These blocks duplicate exactly the curvature of the Earth’s radius. The ratio of the slant height of each lateral face to half the base (230.363 m), when the height is 146.515 m, is the golden ratio. * The Great Pyramid also contains the squaring of the circle, which is when the perimeter of a base is equal to the circumference of a circle where the radius is equal to the height. * An important tool used in the development of this Pyramid was a rope knotted into 12 sections to form a 3-4-5 right triangle.

The Great Pyramid of Giza was built to face the True North, which is the geographic North Pole. The Pyramid is at the earth’s center. It lies in the center of gravity of the continents and the exact center of all the land area of the world, dividing the earth’s landmass into approximately equal quarters. Where the longest land meridian (31 degrees east of Greenwich) and the longest land parallel (30 degrees North) intersect is the placement of the Great Pyramid.

Another type of pyramid located in Egypt is the Step Pyramid. The Step Pyramid at Saqqara was built in the Third Dynasty, in 2800 BC. It was the first all-stone built tomb in Egypt. It has six levels of stone decreasing in size as it reaches 200 feet/60 meters in height. It was originally a mastaba, a low rectangular structure which was built over a shaft which lowered to the burial chamber. Imhotep created the step pyramid for the pharaoh, Djoser. As we know, the pyramids of Egypt were built as a Pharaoh’s stairway to the Heavens. Well, each layer of the step pyramid represented five degrees of the dome of the sky (not including the base). The circular pathways of the stars intersect with the pyramid as they rotate in the sky. The pole star is in the center of all rings. This is another understanding of ‘squaring the circle’. **

The Great Pyramid of Giza. (2016, Jun 24). Retrieved from https://studymoose.com/the-great-pyramid-of-giza-essay 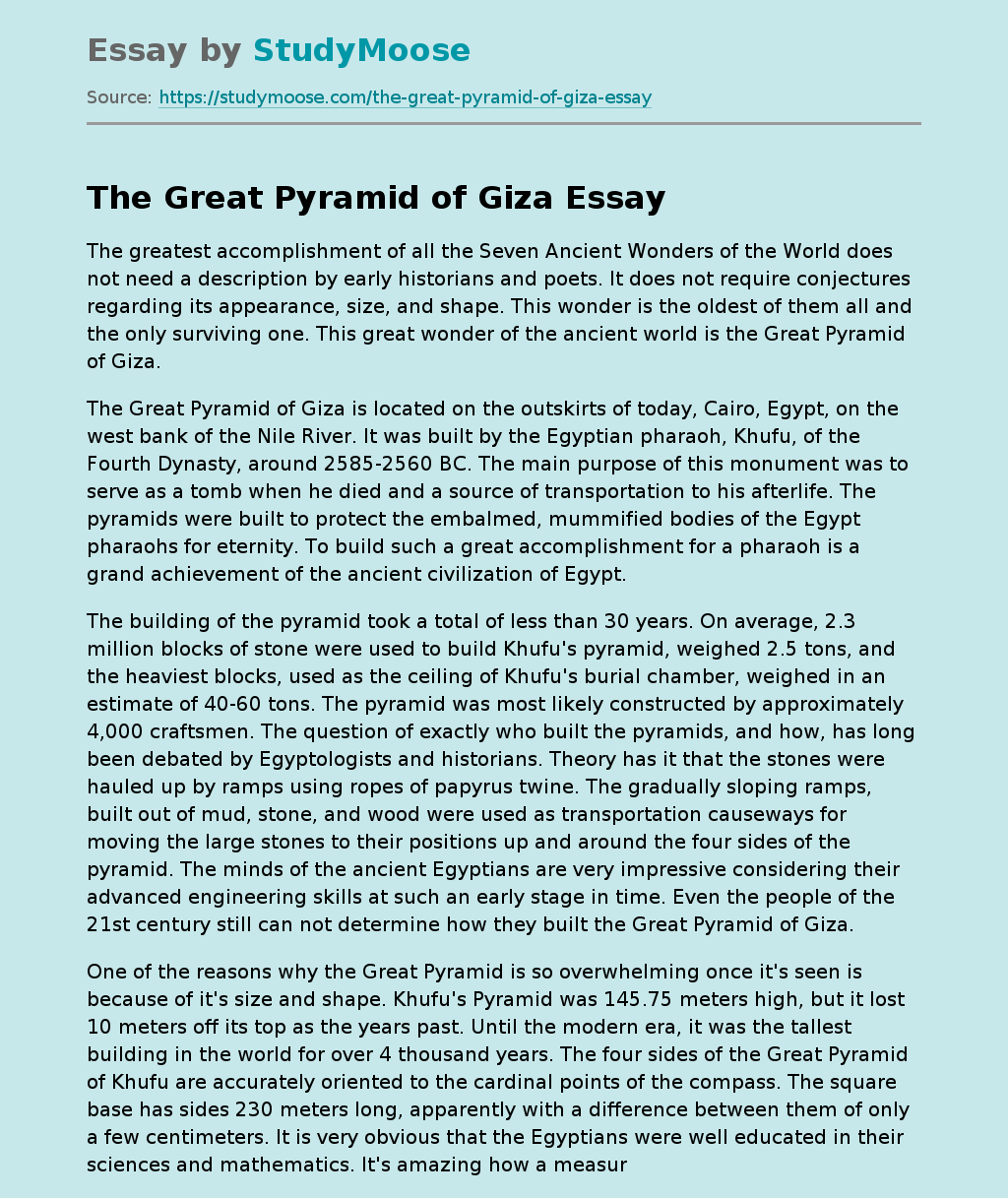