Parenting is far more difficult than people make it out to be. According to Carol Gioia, a Senior Community Advisor for Helium Network, “Being a parent is potentially one of the most rewarding life experiences a person can have. It might also be the most difficult, for parenting is a round-the-clock endeavor filled with demands and obligations”. Gioia makes a point that not everyone will live up to be “good parents” because no parent is perfect, but they can be good by enforcing a never-ending supply of unconditional love.

Don't use plagiarized sources. Get your custom essay on
“ The glass castle ”
Get custom paper
NEW! smart matching with writer

In the article “What Makes a Good Parent” Robert Epstein provides that some parenting skills have been proven to conduct better out comes in children’s happiness, health, and behavior. In the memoir The Glass Castle, the Walls’ parents are not perfect when it comes to their methods of parenting, but both Rex and Rose Mary do to teach their children valuable life lessons. Even though Rose Mary and Rex Walls’ are seen as unfit parents they both provide evidence of “good parenting” throughout events in the memoir.

They demonstrate what it means to be good parents because of their abilities to provide love and affection, independence, and knowledge. Good parents believe that giving their children lots of love and affection is the best thing for them. Like typical “good parents” today, Rex Walls, in his love, allowed his children to have faith in him by showing them love and affection. Rex Walls often bragged about his past and his future: “When Dad wasn’t telling us about all the amazing things he had already done, he was telling us about the wondrous things he was going to do.

Like build the Glass Castle” (Walls 25). In this quote the glass castle is one of Rex Walls’ dreams and was thought of in such great detail that he would carry the blue prints around with him. He showed affection toward his children by enriched their minds with his stories and ideas like the glass castle to keep them optimistic during their family’s difficult times. At one point, Jeannette goes on to describe how other children spend their Christmas talking about how those kids are brainwashed into believing the myths of Santa Clause.

Rex Walls after losing his job responds with “Years from now, when all the junk they got is broken and long forgotten…you’ll still have your stars” (Walls 41). Even though Rex has lost his job and had no money to spend on his children for Christmas he gives them any star that they choose. Although it is not humanly possible for one to claim a star as their own, Rex gives his children a shot at a good Christmas. Showing them love and affection by giving them hope given that they are living a hard life as their parents struggle to earn money. According to Bridget Coila, “Parental affection comes in many forms. Parents can offer plenty of hugs, kisses and cuddles to young children, and babies”. While other parents might offer their love and affection through hugs and kisses; Rex Walls’ shows his affection through family projects and inexpensive gifts. Parents that provide love and affection will not only help nourish a parents’ relationship with their child, but to also achieve happiness in child’s life. Good parents will often allow their children some independence to have those experiences that will help aid them in growing up. In the article “Helicopter Moms vs. Free-Range Kids” Skenazy, a New York columnist, was provoked by criticism for letting her grade-schooler ride the sub-way alone. Skenazy stated in her blog—Free Range Kids—that “modern children need some of the same independence that her generation had. In the good old days nine-year-old baby boomers rode their bikes to school, walked to the store, took buses—and even subways—all by themselves”.

According to the article Skenazy believes that helicopter moms reject the idea of freedom and hover their child’s safety by having a needless overprotective security detail on their child at all times. Rosemary Walls, unlike typical “helicopter parents” today, allows her children to learn from life without parental help. Rosemary Walls felt that “it was good for kids to do what they wanted because they learned a lot from their mistakes” (Walls 59). This showed that Rose Mary did not worry herself about hovering over her children that caused other parents to make every decision for their children. Rose Mary encouraged autonomy and independence above all because throughout The Glass Castle, she never helped her children with anything and told them to do whatever they wanted without rules or guidelines. Rosemary was working on a painting a few days after Jeanette returns from the hospital (from the burns of cooking hotdogs). Jeanette asked her mother if she would cook her a hotdog; Rosemary said no. “‘Good for you,’ Mom said when she saw [Jeanette] cooking. ‘You’ve got to get right back in the saddle. You can’t live in fear of something as basic as fire'” (Walls 15). This is a great case in point that Rose Mary lets her child, Jeanette, at the age of three have the independence to cook for herself.

A parenting technique used to help a child make their own decisions and be more self-sufficient by not burning themselves using fire to boil hot dogs. Children that are allowed more independence and freedom to make mistakes and to better learn important life lessons by making their own decisions. In his article “What Makes a Good Parent” Robert Epstein discusses the Scientific American reports: research revealing ten essential parenting skills that were determined most important to bringing up healthy, happy and successful children. Epstein reveals one of the top ten is Autonomy and independence, “You treat your child with respect and encourage him or her to become self-sufficient and self-reliant” (49). Epstein is expressing the importance of allowing a certain amount of freedom for children to make their own mistakes and decisions in life. Although it might seem like the Walls’ are negligent at times, Rose Mary, allowing her children to go out and make life decisions by learning many life’s lessons to be more self-sufficient in the future. Parents that do not hover over their children about every little thing in a child’s life sets an example of being better parents.

Good parents will promote and help educate their children to gain an educational advancement for a successful life. Unlike typical parents today, both Rex and Rose Mary Walls top parenting priority is to provide an education for their children. At one point, both the Walls parents decided to enroll their children in school at Mary S. Black elementary school. [Rose Mary and Rex] had already taught [Jeanette] nearly everything Miss Page was teaching the class. (Walls 58) This shows that both Rex and Rose Mary main priority was giving their children an enriching intellectual education, even though they were enrolled in school late. Children who are found to be educated by their parents allowed them more a model of learning and to becoming successful in the future. In the article “What Makes a Good Parent” Epstein discusses the importance of parents educating their children. Epstein found, “that parents are far better at educating their children and keeping them safe than they are at managing stress or maintaining a good relationship with other parent…” (49).

Epstein is expressing the importance of parents educating their child can promote learning and provide educational opportunities for the child’s future success. Although Rex and Rose Mary Walls priorities were mixed up their best parenting skill was at educating their children. Parents that educate their child provide a pathway to success because the children pick up on what their parent’s morals and generally repeat when they later have children.

One might object to Rex and Rose Mary Walls’ being represented as “good parents” because they lack common parenting skills such as how they show their love and affection, and how they provide a healthy lifestyle for their children. For Rex Walls’ it was his overuse of alcohol that led him to neglect his children when they were in dire need of tender love and affection instead of a consistent stir-crazy drunk. Rose Mary Walls’ suffered through her depression of not becoming a full time artist, although she still focused more on her art than she did her own children. Rose Mary believes that “fussing over children who cry only encourages them, [she told her children]. That’s positive reinforcement for negative behavior” (Walls 28). Some argue that Rose Mary was introducing her morals of how to raise a child by not coddling them with love or affection. This quote argues what some readers see as neglect by Rose Mary for not caring for her children when they were hurt or in need of a little motherly affection. While Rex Walls’ was the provider of the house Rose Mary was a stay at home mom, a mom that could do the cleaning, the cooking, and the raising of their children.

Although she was hardly ever up to the challenge of feeding her kids, she asks the children “Why spend the afternoon making a meal that will be gone in an hour, [she’d ask the kids], when in the same amount of time, I can do a painting that will last forever” (Walls 56). Rose Mary’s question to the children foreshadows the events in the memoir when she puts her dreams of being a painter ahead of taking better care of her children. As one of Epstein’s ten competencies to predicting good parenting you must “model a healthy lifestyle and good habits, such as regular exercise and proper nutrition, for your child” (49). Epstein makes a valid point that parents should promote healthy life for their child by feeding them and encouraging physical fitness. Parents that do not demonstrate good health or proper love and affection for their child, for example the Walls’, are ranked as unfit parents. Even though the Walls’ demonstrate bad parenting by the misuse of love and affection, and healthy lifestyle they still show some parenting skills that can be recognized as “good parenting”.

Rex and Rose Mary show affection towards their children by creating a relationship of promises and stories of their adventures. They give their children independence and respect to encourage them to be self-sufficient and self-reliant requiring them to grow up sooner than later. The children are also provided an education by their parents, molding them into intelligent individuals at a young age to understand that knowledge is far more important than any parenting skills that predict good outcomes for their child’s life. 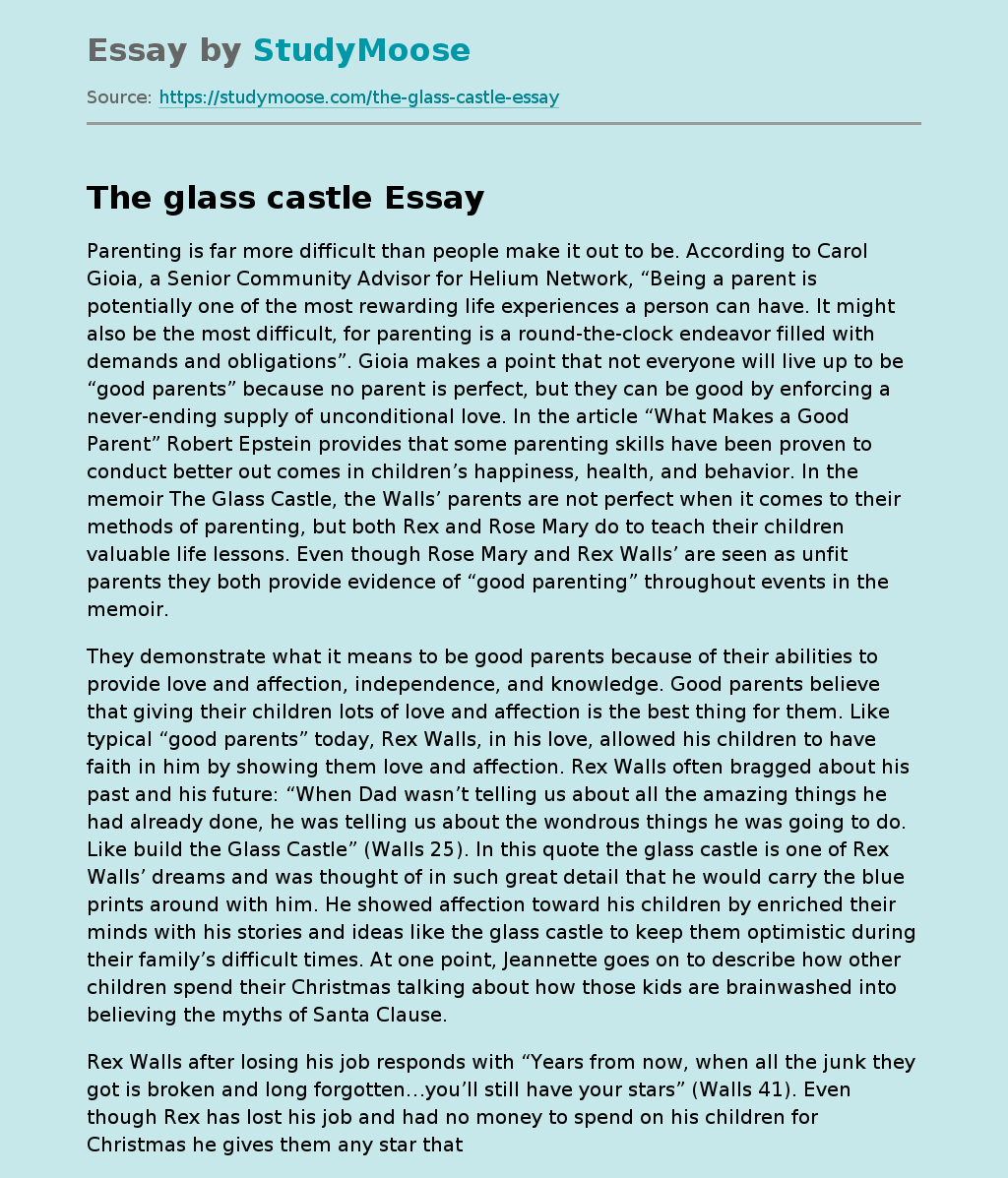