The novel The Glass Castle, by Jeannette Walls, addresses many social issues that we deal with every day. The most important social issues disputed on a daily basis are the kind of parents we want to be and what we want to teach our children for their future. In this memoir we are able to see how Rex and Rosemary Walls choose to educate their children to see the better side of their daily troubles. The Walls teach their children that no matter what nature throws at them, that they can handle it.

Don't use plagiarized sources. Get your custom essay on
“ Glass Castle Essay ”
Get custom paper
NEW! smart matching with writer

Rex and Rosemary Walls may not have been the best parents, or even good parents for that matter, however they were able to turn their children into well-educated and better off adults.

They were able to accomplish this by finding creative ways to teach them important life lessons. Like to learn how to face your fears and what doesn’t kill you will make you stronger. Although many people would not necessarily agree with the manner these parents educated their children, we can certainly accept the fact that most of the children gained exceptional values that otherwise may have not been learned.

These young children had to endure many hardships to learn the true meaning of being a family. They had to endure the poverty they lived in and the stubbornness of their mother who always wanted something better.

They had to struggle between nature versus nurture and the struggle within themselves. The primary characters Jeannette Walls, Lori Walls, Brian Walls, Maureen Walls, Rosemary Walls, and Rex S. Walls together are able to define what a family is. Jeannette Walls is a bright young girl who has faith in her father to keep his promises. She learned to have hope for a brighter future. Early in the memoir Jeannette’s father teaches her an important life lesson. The lesson to always face your fears no matter what they are. In his words “… but you can’t cling to the side your whole life, that one lesson every parent needs to teach a child is ‘If you don’t want to sink, you better figure out how to swim…” (66) This example is of when Jeannette is beginning to learn how to swim.

Her father pushes her to keep trying until she finally is able to swim without drowning herself. Another significant life lesson Jeanette’s mother demonstrates is at the beginning when Jeannette burns herself and learns to not fear fire, but face it and eventually becomes fascinated by it. As she states in the following sentence “Good for you, Mom said when she saw me cooking. ‘You’ve got to get right back in the saddle. You can’t live in fear of something as basic as fire.’ I didn’t. Instead, I became fascinated with it. Dad also thought I should face down my enemy, and he showed me how to pass my finger through a candle flame…” (15).

Lori Walls, Brian Walls, and Maureen Walls are Jeannette’s siblings with whom she is very close with and together make their dream of escaping their dysfunctional lifestyle a reality. Together they learn how to be loyal to each other. They always stand by each other and sometimes even acting more like parents than their own parents do. The children stand together so they could stand up to those who tried to hurt them. The Wall’s siblings show loyalty to one another because they are always together and support each other no matter what.

While the parents unconventional method of parenting eventually works out, many events suggest that even though the children gained all these virtues, the parent’s manner in achieving them wasn’t totally appropriate for them. An example of this is when Jeannette’s father takes her to a bar and doesn’t care if an older man abuses her sexually.

He just assumes that Jeannette is tough girl who knows what she is doing and can take care of herself just fine even though she is only twelve at the time. “…Aw, come on,’ he said and shouted at Dad, ‘I’m going to take your girl upstairs.’ ‘Sure’ ‘Just don’t do anything I wouldn’t do.’ He pointed his pool cue at me. ‘Holler if you need me,’ he said and winked at me as if to say he knew I could take care of myself, that this was just a part of my job.” (212) However, her father never meant for his daughter to get hurt so this is why he said to call him if she need it, but he wanted her to learn how to defend herself. In the end she did defend herself and faced her fear like her father had taught her.

Another part where we can see Jeannette’s father in lack of responsibility is when he is so careless during one Christmas and ends up destroying Christmas for his children. This Christmas incident is a significant example of how alcohol can change a parent and the effect it can have on them because it shows the change from how Jeannette’s father goes from being a loving, caring, and responsible parent to an alcoholic father. It shows how Jeannette begins to see how her father really is.

Like the Christmas incident and how he came home from bars and would get into fights with his wife. This made Jeannette start to not believe in her father as much as she did before. However, this experience served to teach Jeannette and her siblings that it wasn’t good to let yourself fall in any bad habits like alcoholism and betting. Another scene where the mother; Rosemary isn’t portrayed as a good parents is when she doesn’t do anything to protect Jeannette from her uncle Stanley and instead makes a silly remark that he is so lonely. “

Mom, Uncle Stanley is behaving inappropriately,’ I said. ‘Oh, you’re probably imagining it.’ She said. ‘He groped me! And he’s wanking off!’ Mom cocked her head and looked concerned. ‘Poor Stanley,’ she said. ‘He’s so lonely…” (184) Nevertheless Jeannette’s mother actually taught her a harsh lesson about life through this; she showed her that many of these situations happened to young girls and nothing is done to prevent it from happening again instead people turn to look the other way.

Overall the Walls parents Rex and Rosemary may not have been the best parents, but they did the absolute best to help their children become great human beings and not have any trouble in confronting their problems. Yes, they probably didn’t resort to having taught them in the best circumstances, yet they did the best they could due to their economic struggle. On the other hand the Walls children had a better chance to put those lesson and skills they learned to the use. 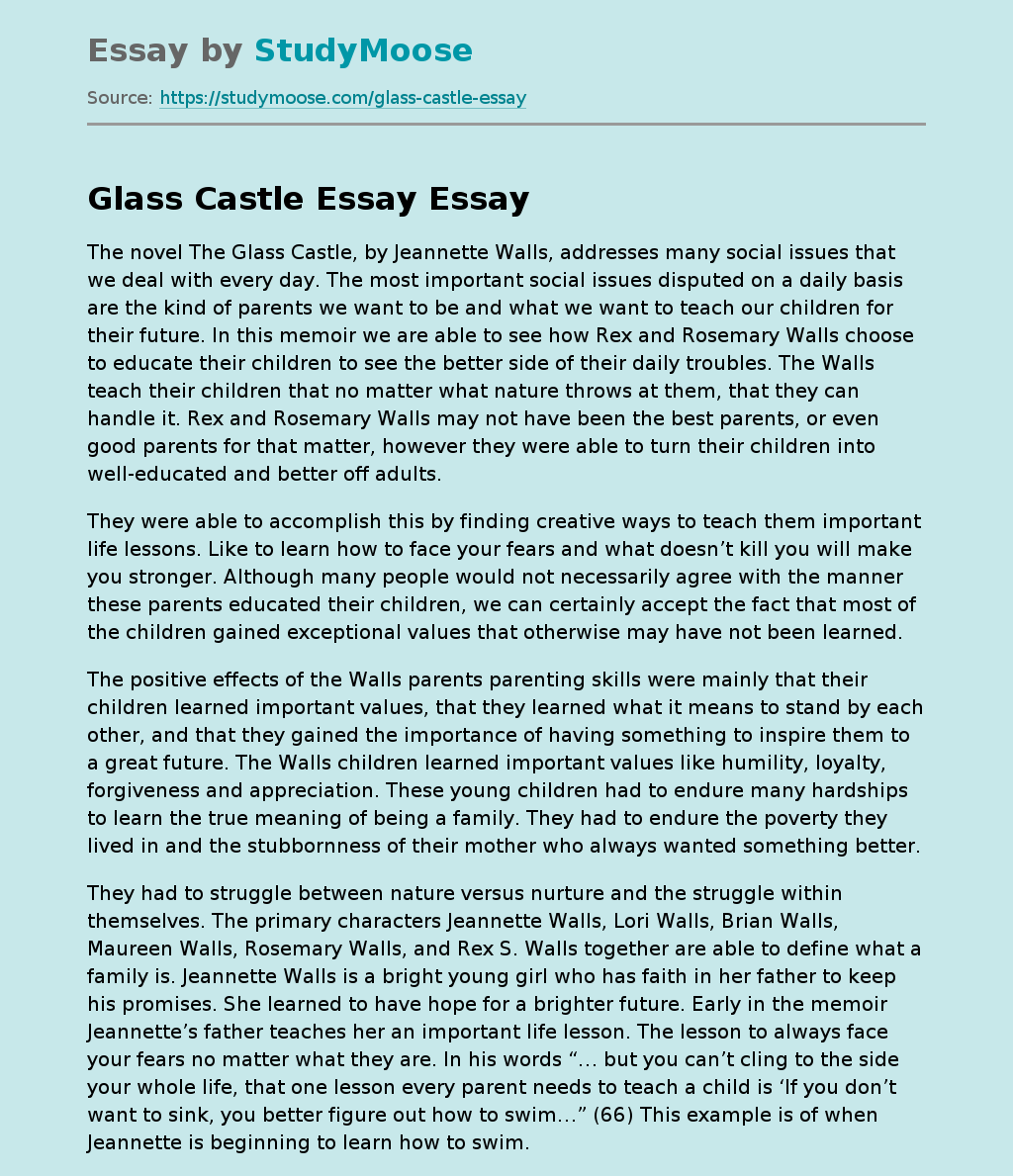