There are six members of the Walls’ family, Rosemary, Rex, Lori, Jeanette, Brian, and Maureen. The family is obviously dysfunctional with an alcoholic father and a mother who does not want the responsibility of raising four children. Throughout the book we see the children taking on some of the basic roles of a dysfunctional family and sometimes changing roles.

The “Hero” is one who assumes a parental role or is the most successful of the family, and becomes the pride of the family.

Don't use plagiarized sources. Get your custom essay on
“ Literary Analysis of a Book Glass Castle ”
Get custom paper
NEW! smart matching with writer

Lori is the oldest of the children and assumes the “Hero” role in the family. Lori takes care of her three younger siblings and never really causes any serious problems and always takes the responsibility of the group. Later in The Glass Castle, Jeanette becomes the “Hero” because she becomes the most successful of the group; she moves to New York City to go to college (the first of her family to attend college) and eventually becomes a successful journalist, editor, and writer.

The “Lost Child” or “Invisible Child” in the book is definitely Maureen. The “Lost Child” is the child who is quiet and almost a background character, this child is often lost to the family and doesn’t really belong anywhere. Growing up, Maureen avoids her family’s problems by simply not being there at all. She is always at a friend’s house, and never really learned to care for herself. Maureen is hardly mentioned in the book because she just was hardly there. When Maureen was home she had little to say, and you only notice her in the end of the book when she changes roles.

Perhaps Maureen’s eventual mental instability is because of being passed on from family to family growing up and simply just wants someone to love and take care of her.

The “Scapegoat” is the one who takes the blame or is blamed for all of the family’s problems. Actually all the children are “Scapegoats” in the book,  the mother is constantly blaming the children for her unsuccessful art career (although in the book she never attempts to sell her artwork) and for the troubles of the family. The “Scapegoat” becomes more apparent in the end when eventually Maureen stabs her mother, Rose Mary, and is sent to a mental institution. When Maureen is released she moves to California, where she has always dreamed of living since she was a child.

The “Mascot” role of a dysfunctional family is someone who tries to distract the family from the bad situation and make them feel better by joking with them and making them laugh. In the Walls’ family, the “Mascot” is Brian. Brian is constantly trying to provide comic relief to the stressful situations, sometimes when it isn’t appropriate.

So as you can see, the basic roles of a dysfunctional family are played out and switched occasionally in the book. You may also see the same pattern in other dysfunctional families, but maybe not exactly the same like one person may play more than one role, but these dysfunctional roles are ones you see often and can apply to both real life and works of literature.

Literary Analysis of a Book Glass Castle. (2021, May 12). Retrieved from https://studymoose.com/literary-analysis-of-a-book-glass-castle-essay 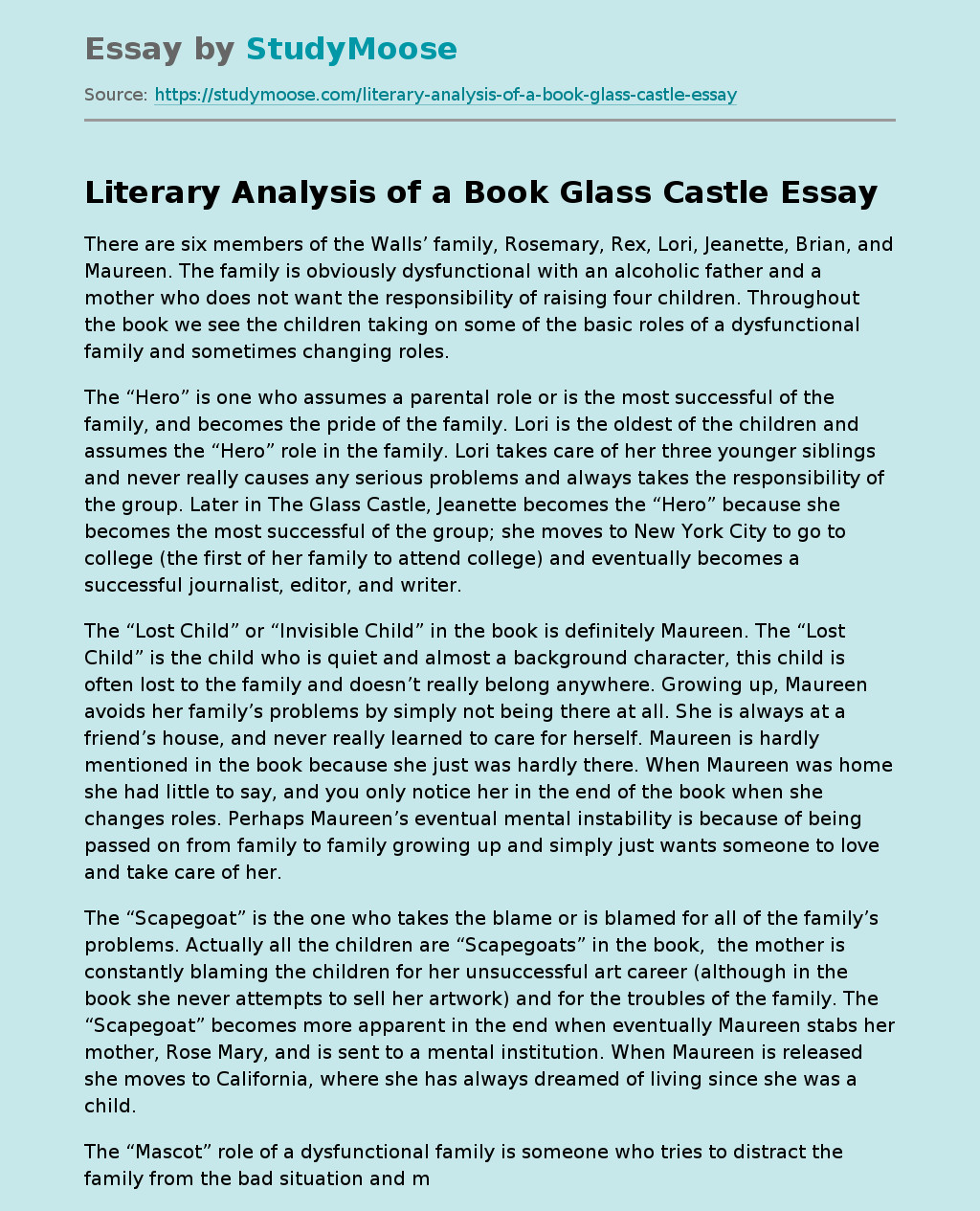