The Five Towns is My Favorite Place

Ever since I was a little boy I’ve lived in long Island – the Five Towns. I currently live in the town of Woodmere where I have been living now since the second grade. I sincerely believe that the Five Towns is an ideal place to raise children and have a family. Some of the reasons for my belief is due to the safeness of the area as well as the people that live here which many of them happen to be very wealthy.

Don't use plagiarized sources. Get your custom essay on
“ The Five Towns is My Favorite Place ”
Get custom paper
NEW! smart matching with writer

When I was born my parents, twin brother and myself went to queens to live with my grandparents where we lived for about a year until we moved to Cedarhurst, one of the towns in the Five towns.

I lived on Kensington Place. We lived in the first house on the corner in a white house with a white picket fence. The houses on my block did not all look the same. My house was white, had four big windows on the front of the house as well as two pillars holding the top molding up above the entrance and big grass front yard. Some other houses on the block were modern looking, some a little older, some fancy, while others reminded of summer homes in the Hamptons.

I would like to tell you that I loved living there but come on, you know as well as I do that that is not really possible or logical for me to say because at the age of 2 who knows or remembers anything that is going on or anything that has happened around them. For this reason, I am going to say that my parents told me that I used to love that house. We used to have a trampoline and a swing set that my brother and I used to always play on. Pittacus Lore once said “A place is only as good as the people you know in it. It’s the people that make the place.” While living on that block we made great friends with all of our neighbors.

From when we first moved into that house up till when we moved everyone was so welcoming and loving and did everything they possibly could to make us feel welcome. We lived in this house for about three or four years until we moved back to Queens with my grandparents due to a bug infestation. To this day whenever we walk past our old house I still wish we lived there. After living back in Queens for about three years we finally moved to my house now in one of the Five Towns known as Woodmere. We have been living here for about fourteen years now, and I absolutely love it here.

My house is a red brick house different than the other houses on my block. While the house color is different the shape of a lot of the houses on the block is quite similar to each other, probably all built by the same people some 85 years ago. The safety and well-being of my family has always been a top concern of my mother’s. The overall crime rate in Cedarhurst is 69% lower than the national average. For every 100,000 people, there are 2.41 daily crimes that occur in Cedarhurst. Cedarhurst is safer than 71% of the Cities in the United States.

In Cedarhurst you have a 1 in 114 chance of becoming a victim of any crime. So, with all of that being said, my neighborhood is considered to be quite safe, and I would feel pretty confident in raising a family here. One of the main blocks in the Five Towns is known as Central Avenue. This block runs through three out of the Five towns. On this long block there are houses – every type of house you can think of, as well as doctor’s offices, business offices, shopping establishments, food establishments, fire houses, basically you never had to leave the Central Avenue if you live there. All over the Five Towns no matter which town you live in the people are all so friendly and welcoming and are just so pleasant to be around.

Whether it is from passing you by on the street and saying a simple good morning or to a have a good night in the evening times, the citizens of the Five Towns are just all-around jolly people. Besides for all of the houses and stores in the area there are as well some parks and gyms, as well. One of the most popular parks around is known as Cedarhurst park. On many occasions there will be fairs or Barbeques going in which many many people come out and have a great time. On any given day you will always find kids there with their parents and or people playing with their dogs and kids running around the baseball field or the big grass area throwing a football or kicking a soccer ball around.

Another big park is known as Grant park. There are many baseball fields and tennis courts, as well as basketball courts and an ice-skating rink during the winter months. In addition to kids playing in parks, people are all so welcoming for kids to be playing in their homes whether it be inside or outside in the backyard the neighborhood is always popping. Sometimes it is just nice to get away from the city life, which can be very stressful and overwhelming. Woodmere New York is a place where one can sit back and relax while enjoying the peacefulness of nature around. Not having to worry where your kids may be at any given time day or night because living in the Five Towns you know your child is safe.

The Five Towns is My Favorite Place. (2021, Dec 10). Retrieved from http://studymoose.com/the-five-towns-is-my-favorite-place-essay 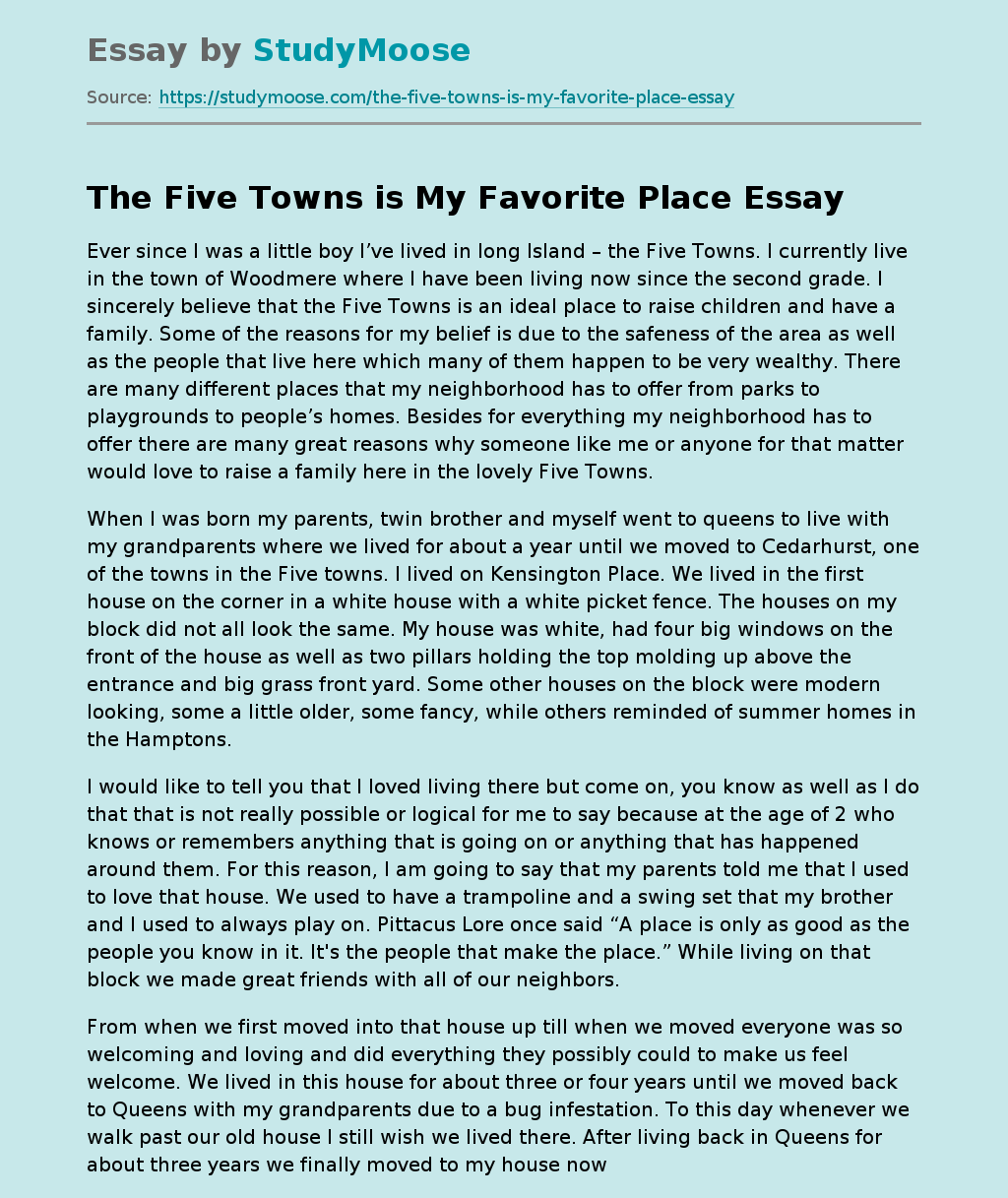