In the world of comic books and fantasy literature, there have been a multitude of amazing superheroes. Each superhero has their own unique set of skills and personalities. My favorite superheroes are Captain America, Batman, and Iron Man. These three superheroes have come to their powers in different ways, yet they all use their awesome talents to fight for good. Captain America, Batman and Iron Man all have extraordinary abilities, which make them unique and special.

Captain America has been given the gift of super-human speed and strength and the ability to heal quickly.

Batman has super gadgets, such as the Batmobile, batarangs (bat shaped boomerangs), and a grappling gun. Iron Man, like Batman, relies on technology to create his advantage. His primary advantage comes in the form of his full body metallic suit. The suit features a smart computer and multiple weapons systems. The special powers and technologies these superheroes possess set them apart from the average man on the street.

Even though they all have special abilities, each of these superheroes came to their abilities in a unique way. Captain America was the subject of a military experiment that had aimed to create a super soldier. His physical abilities and appearance were altered with the injection of a special serum. Contrary to the Captain’s origin, Batman derives his power from expensive, state-of-the-art technology. His motive to fight crime stems from the death of his parents, who were killed when he was a child.

Iron Man, on the other hand, suffered a chest injury during a kidnapping, in which his captors attempted to force him to make weapons.

In order to escape, and save his life, he created a powered suit of armor. As you can see, each superhero had a different origin but they have all used their experiences to fight for good. Captain America had been small and frail before his transformation, so he fights with a sense of protecting the weak. Captain America is an inherently good and honorable person. Batman fights crime as form of vengeance, or revenge, due to his parents’ deaths.

Batman fights for good despite being a dark and tormented character. Iron Man also fights for the good side, but he does so a little reluctantly. He originally acted to defend his company’s interests, but inevitably he began to use his powers for a greater good. These superheroes may come from different backgrounds and have unique skill sets but they share a common goal. They all fight to protect the weak and the innocent from the powers of evil. Despite their superficial differences, these superheroes are very much alike. 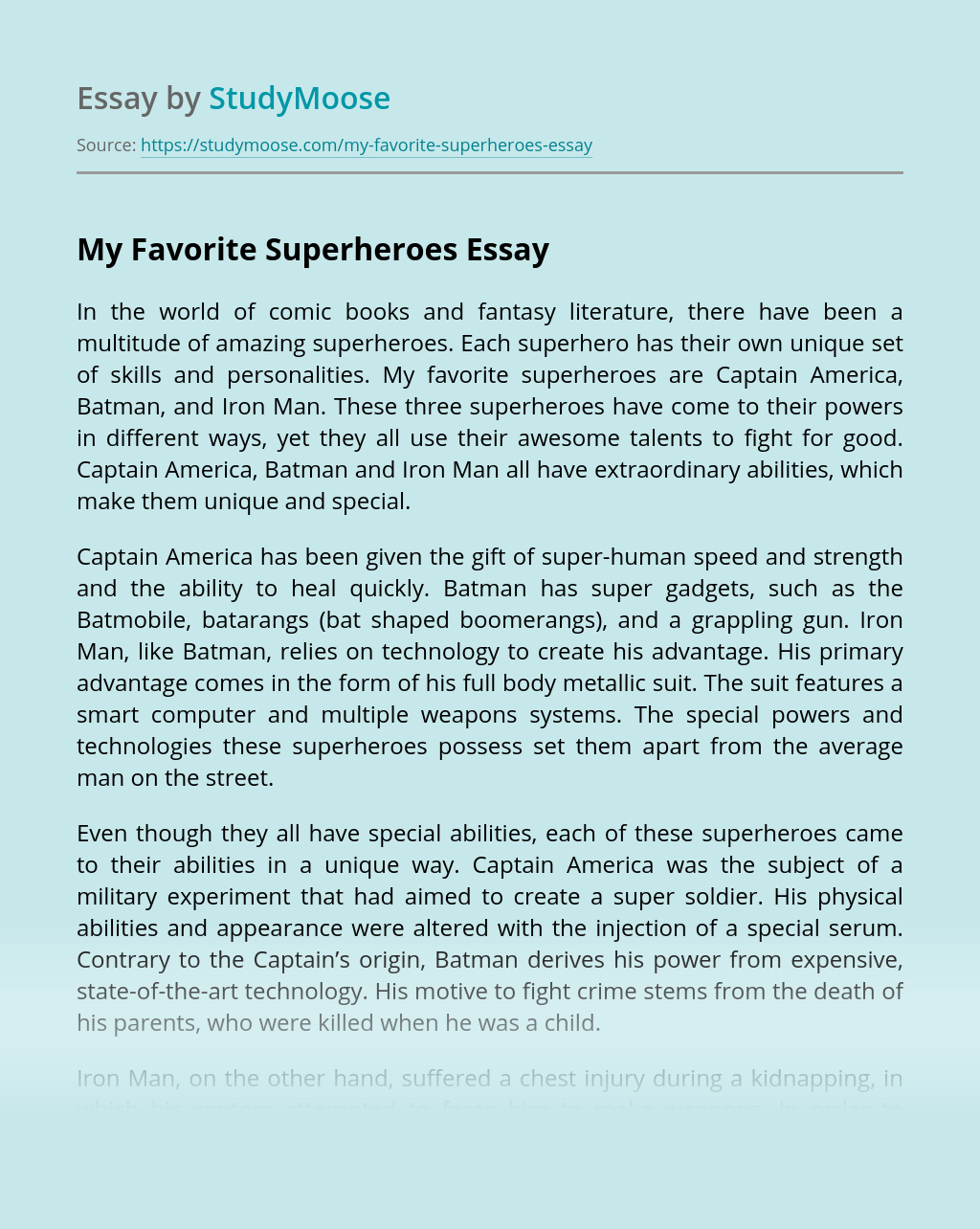 Don’t waste time
Get a verified writer to help you with My Favorite Superheroes
Hire verified writer
$35.80 for a 2-page paper
Stay Safe, Stay Original