The First Day of Basic Training

The first day of basic training was one of the most horrifying days of my life. I was afraid. I was terrified. I did not know what to expect from or during basic training. I repeated over and over again, “Why did I join the army? ” I should not be here. I was so far away from home. I had no family close by. Everything that could possibility went wrong did. First, I was late arriving to basic training. Second, I did not have the correct athletic shorts formation.

Turn in your highest-quality paper
Get a qualified writer to help you with
“ The First Day of Basic Training ”
Get high-quality paper
NEW! AI matching with writer

Third, a white male approach me with wearing a round brown hat covering his eyes yelling at me for wearing the wrong athletic shorts to formation.

The First Day of Basic Training My memories of my first day of basic training are very dramatic. The date was June 9, 1999. My family was there to send me off on the beginning of my life long voyage. Before taking me to the airport, my family and I had lunch at the Boston Market. This was a happy and sad occasion.

No one in my family had left home in a long time. As I say my goodbyes to my family, I try to prepare myself for the unknown obstacles of basic training.

I decided to wear my sweat pants I wore from home. As soon as I stood in formation, a white male approach me with wearing a round brown hat on covering his eyes. The man looked like a middle linebacker in the NFL. The man sleeves were rolled up allowing his muscles to protrude through his Battle Dress Uniform. I was intimidated by this man. This guy was extremely large. I was only 130 lbs, and he made me look like an ant crawling at his feet. The first thing he said was private what your name is, and where are you from. I replied, “My name is Theodore Holley, and I am from Wilson, North Carolina.

He immediately started yelling. He yelled, “Private Holley, do you think you are still on the block? ” The man face was blood shot red with a vein projecting from his forehead. He pulled me out of formation and took me to the clothing facility to get the correct shorts. After I returned from the clothing facility, I had to report to the barbershop. I watched soldiers come out of the Barber Shop upset with a bald head. The drill sergeant yelled keep it moving as one soldier came out of the barbershop, and other solider went in the barbershop. No one could express a since of style. Every soldier received the same treatment.

When I ran the two miles was portion of the physical fitness test, I felt like I was running a marathon. I thought would never cross the finish line. The end the day was near when I was off to the chow hall and later the barrettes. As I lay in bed, I wondered what would all happen during the next three months of basic training. There were numerous rules and regulations to follow. I was thinking this could not be reality. I wanted to go home, but going home was out of the question. I was stuck here. The first day of basic training was a changing point in my life which man was built.

The First Day of Basic Training. (2016, Sep 13). Retrieved from https://studymoose.com/the-first-day-of-basic-training-essay 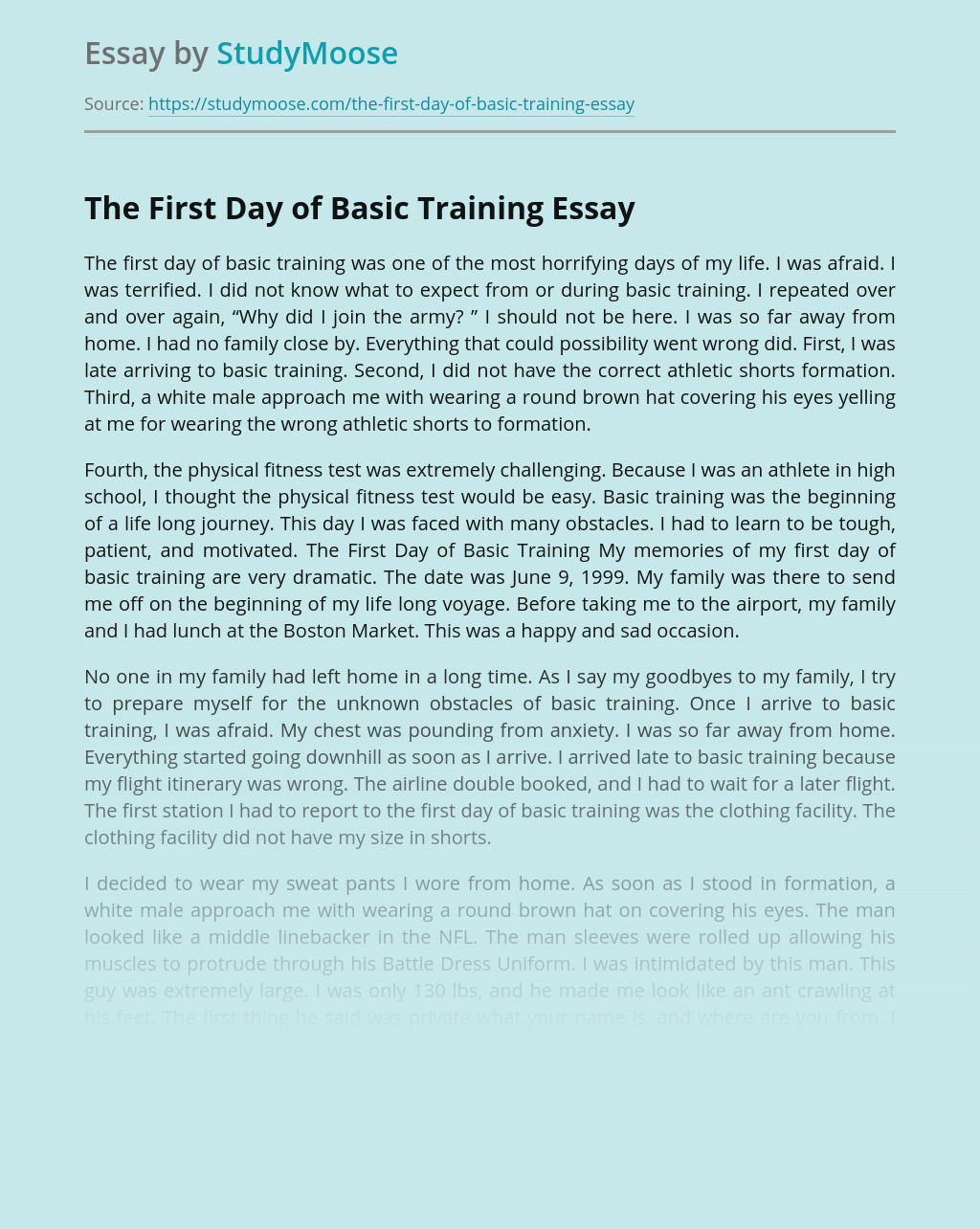 Turn in your highest-quality paper
Get a qualified writer to help you with
“ The First Day of Basic Training ”
Get high-quality paper
Helping students since 2015
Stay Safe, Stay Original