My first day at a new school

The first day if a new school is very difficult because you don’t know any one and u feel all alone. Most kids do good because they are a people person which can help because they talk to people and know were or how to get around from talking to other kids. There are also kids that don’t talk as much to other people they don’t know either because there shy .So this I how I overcame the obstacles on my first day.

Don't use plagiarized sources. Get your custom essay on
“ My first day at a new school ”
Get custom paper
NEW! smart matching with writer

The most memorable first day I had was when I went to Kenny Guinn middle school. I knew no one in my home room so I sat there for a moment and the teacher began to call roll call then after that passed the kids in the class began to talk and so nothing. the teachers got their attention and explained rules and regulations. shortly after that some kid s started getting kinda loud so the teacher got their attention he sent one of the three to another class and his friend threw a paper airplane instead of the teacher doing something to punish he made a funny remark about the kid.

Proficient in: My First Day In School

The bell sone rang and we all got up and head off to our next class remember the first class I had was science,at first I was about the tenth student in the classroom I noticed one of my friends walked in the classroom and sat next to me . I told him how frustrated I was and he told me to “just don’t worry about it and calm down”.

so after he convinced me to calm down

and I began to relax. The teacher then started her lesson plan, then she explained her classroom rules and regulations shortly after that she told us what we were going to do the rest of the school year. When she had finished, the class began to talk. that was when I realized my friend that was sitting next to me, as I mentioned earlier had the next class with me. dong dong dong the bell has just rang so we headed for our next class,

that next class was math. and he began to do the same as the first teacher then that class ended so we my friend and I went to lunch.

The most exciting part of the hole day was the lunch period .Were I got lucky enough to meet most of my friends there that day so that was a big relief. I ate some lunch that help because the hole day I was feeling kind of sick so that helped me replenish my self, then we all started talking to one another after a short amount of time we all got confused so then we laughed at ore selves for being so stupid. then I diced to walk over to this girl I liked after being convinced that nothing terrible can happen and it won’t be the end of the world so I did it and I then had a date to the dance thing they were having, the school was throwing it for the new year. So the day has gone smoothly and not too difficult in anyway or manner.

Soon after lunch ended we/all the kids went to class then I went to my next class the same routine was used for the lesion plane for the last four class and once that was over it was a little frustrating to find my buss but then I found it just in time and when I got home I said hi to my dad and then had something to eat. And I learned if I was to ask someone I don’t know can still help me and being shy has its down falls.

My first day at a new school. (2016, Jul 16). Retrieved from https://studymoose.com/my-first-day-at-a-new-school-essay 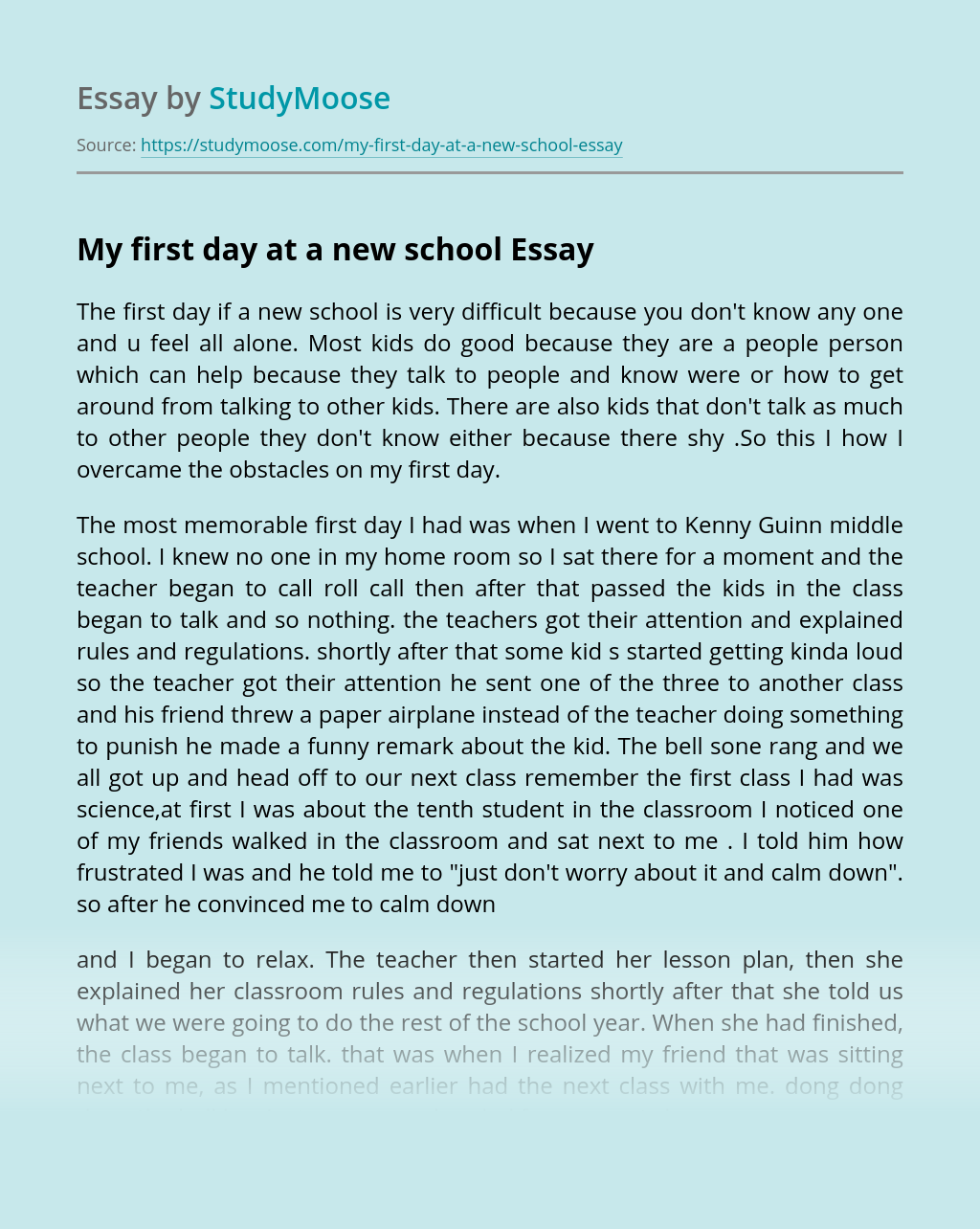