“What’s your name” asked one of two men in camouflage uniforms standing in front of me. “Holtan, Drill Sergeant” I half stuttered. The other man flew into an angry rage and started to scream at me “Soldier, he is not a Drill sergeant, look at him now soldier! What rank is he now that you looked? “He is an officer” I said trying not to cry, my lower lip trembling slightly. “Holtan now start pushing and don’t stop til I come back, because im the command sergeant major of this base.

Don't use plagiarized sources. Get your custom essay on
“ My first day of Army basic training ”
Get custom paper
NEW! smart matching with writer

After high school I decided to go and serve my country in the United States Army. I signed up January of 2002, my senior year of high school to be a medic. My official first day in the Army was August 22nd 2002. I arrived in Columbia, South Carolina at 1145pm, after two hours of riding in a cramped bus I arrived at Ft. Jackson and the in processing station.

On August 28th , after getting stuck with needles, countless interviews, pushups for calling people the wrong rank and the first twinges of homesickness, the first day of real basic training loomed like immense purple wall clouds in the very near distance.

“Open your eyes and get ready to go” the drill sergeant yelled from the front of the bus. Grabbing our issued green duffle bags and getting ready for the impending doom of our first meeting with our drill sergeants. The bus came to a quick stop, immediately the drill sergeant in the front of the bus started pushing people out the door yelling “GO, GO, GO” Running out of the bus I had only a second to get my bearings, after leaving the bus I was now running though a field of very dry grass with a large castle like building off in the distance.

“RUN FASTER SOLDIER, FASTER” Yelled another drill sergeant. I was completely surrounded, they were everywhere I was starting to feel like the walls were closing in on me. As I ran closer to the castle-like building my bag seemed to feel like it was gaining weight as I went farther, the building I can see now has an open area in the middle with what looked like a million drill sergeants. I wanted nothing more than to turn around and get back on that bus, I had never been so apprehensive about anything in my life.

Most of the yelling ended after what seemed like and we were brought up to our platoon bay, our sleeping area, and emptied out our bags. We didn’t empty our bags out fast enough. “You’re too slow, start running around the room, NOW” the Drill sergeant yelled from the front of the room. The room a rectangular shape had fifteen bunks on each side with a hollow green rectangle painted in the middle of the floor. I kept running and running around that green rectangle, I could hear the Drill sergeant yelling but everything seemed so quiet.

It was so hot in the room, and it was then that I knew I really was in hell. All I could hear was my heavy labored breathing, and I was concentrating on trying not to pass out from the heat. “Left foot, right foot, go faster, don’t stop, I don’t want any more yelling at me” I kept telling myself this over and over again. No matter how fast I ran, they kept yelling at me and telling me I was too slow. I was putting all my effort in trying to just go on, for three more hours that night we ran around that room and did so many pushups and sit ups that the amount of each is a blur.

Throughout all this screaming and yelling I did not break down, even though that was the thing I desired most. The physical limits I surpassed, had never crossed my mind as even being possible. At the time of this event, I thought it was the stupidest thing I had ever done. I wanted nothing more than to quit at the time, but I never did quit and when I thought more about this event. It did show me that I can really do anything if I put my full effort into it. 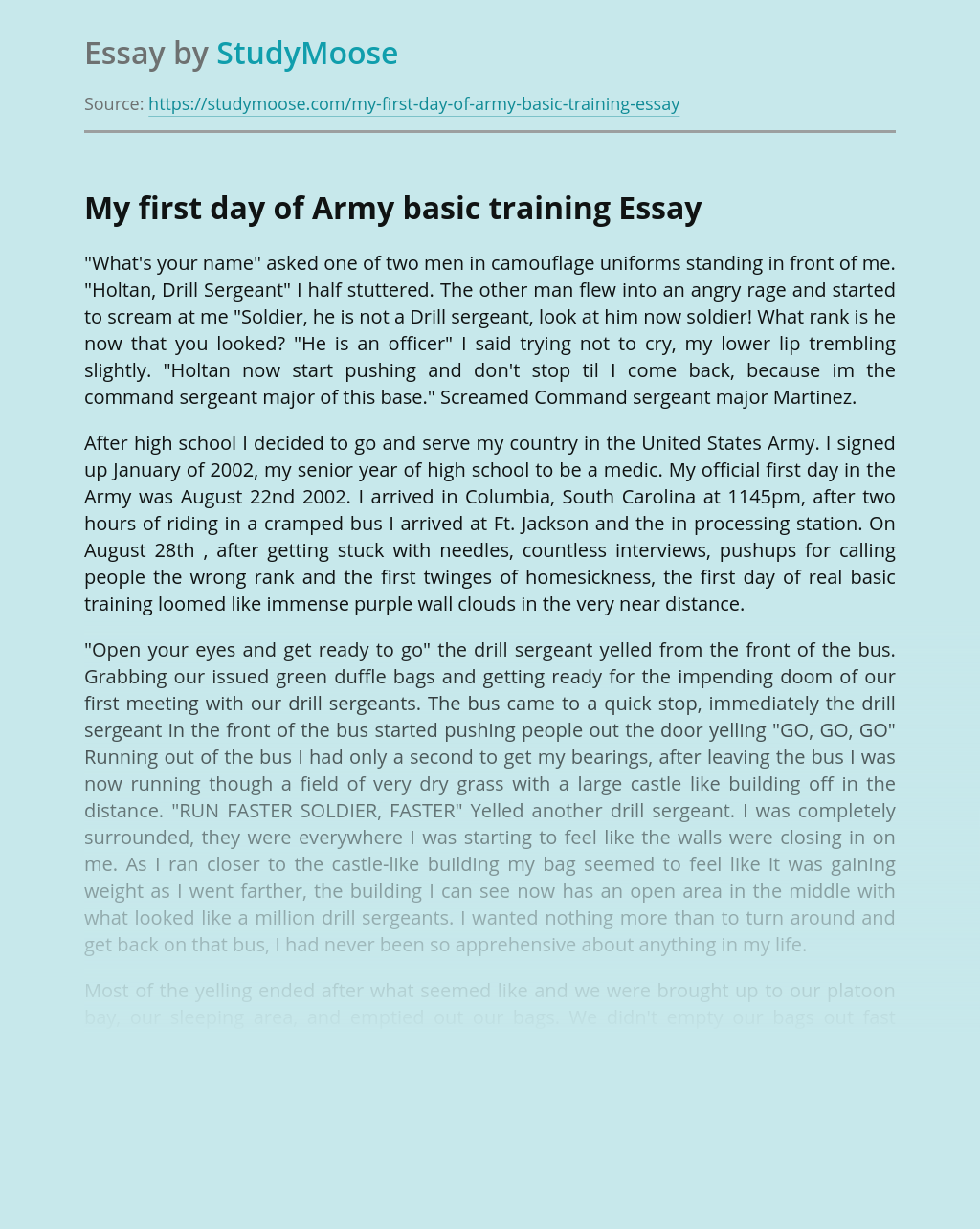