The Family Research Council uploaded a presentation to their website titled Do No Harm: The Peril of Physician assisted Suicide. Congressman Brad Wenstrup gives this presentation on May 18th, 2017 discussing the legalization of physician assisted suicide. Wenstrup, who was elected in 2012 to Ohio’s House of Representative, has experience as a doctor in the United States military, an Army Reserve Officer, and serves on the Committee of Veterans’ Affairs, where he is the chairman of the Subcommittee on Health. Dr. Wenstrup earned his medical degree as a podiatric surgeon and has been in private practice for over 26 years.

Don't use plagiarized sources. Get your custom essay on
“ The Family Research Council uploaded a presentation to their website titled Do ”
Get custom paper
NEW! smart matching with writer

In 2005 he served a tour in Iraq as a combat surgeon, earning a bronze star for his service. He is a surgeon, soldier, and congressman who continues to work with and treat patients at Walter Reed National Military Medical Center. Dr. Wenstrup talks about the oath that health care professionals take that is to do no harm. He believes that by changing the wording of the law, it does not change the definition of homicide or suicide.

He states that physician assisted suicide undermines a key safeguard for the vulnerable, and that it does not provide comfort at the end of life, but it ends life. The Death with Dignity law has currently passed in Washington D. C. and seven other states. Terminally ill patients with less than six months to live can obtain a prescription of a medication that will end their life. He goes on to say that many doctors that have experience with death of their patients will tell you that they are often surprised by either how long someone lives, based off their life expectancy of their prognosis, or in some cases, fully recover.

Many patients when they are diagnosed with a terminal disease are mentally and emotionally vulnerable, and Dr. Wenstrup believes that someone in this emotional state of vulnerability can be coerced into physician assisted suicide. He quotes a statement that the National Institute of Health released that says that although pain is often understood as the primary factor that motivates physician assisted suicide, that is not true. Depression, hopelessness, dependency, and lack of control of their lives is what pushes a patient to the decision, and many states that have Death with Dignity laws do not screen mental health as a component. He goes on to say that there are not any safeguards in place that prohibits family, heirs to estates, insurance companies, or healthcare professionals from influencing a patient’s decision on their death. Although many argue that physician assisted suicide gives patients more options, Dr. Wenstrup believes that it actually gives less options. Those who financially cannot afford treatment, feel like a burden to their family, or are depressed may see legal suicide as their only option. He proceeds to tell the story of when his sister was diagnosed with leukemia 24 years ago, and the only way she would survive was to immediately start radiation, hopefully go into remission, and then receive a bone marrow transplant. Unfortunately, her insurance company deemed bone marrow transplants as an experimentative treatment and refused to pay for it. After acquiring legal counsel, the insurance company eventually agreed to pay for half of the bone marrow transplant, but she was still stuck with the remaining balance. Sick, unable to work, and with two kids at home, she was then faced with the financial burden of paying for a lifesaving treatment that insurance refused to cover. Dr. Wenstrup tells the story about his sister as an example of what he believes insurance companies can now use in order to avoid paying for treatments. He states that if physician assisted suicide had been legal at the time, the insurance company could’ve told his sister that they would not pay for her treatment, but they would pay for her death, which is substantially cheaper. He proves his speculation by another example of a recent case in Oregon, where physician assisted suicide is legal. A man without insurance was diagnosed with prostate cancer. The man, relying on Oregon’s state-run healthcare plan, applied for an expensive form of chemotherapy treatment that his doctor recommended. He received a letter in the mail notifying him that the state of Oregon would not pay for his chemotherapy, but they would pay for his physician assisted suicide. Dr. Wenstrup states that costs are always a factor in medical treatment, and legalization of physician assisted suicide limits options for those who need expensive treatment, because it puts cost over compassion.This presentation was presented at a Family Research Council event, a religious foundation. Dr. Wenstrup, a republican congressman, eludes that he is anti-abortion as well, which means that he is pro-life on both ends of the spectrum, in birth and in terminal illness. He mentions that his stance on this subject is rooted in his Catholic faith, which stands as a bias in legislature. He also has emotional bias, because his sister was diagnosed with a terminal illness and experienced discrepancies with her insurance company. The majority of his points are supported by personal and work experience. He only quotes one source in his presentation from the National Institute of Health. As a nursing leader, I believe that if this law is passed in the state of Tennessee, a nurse’s role as a patient advocate would become even more significant than it already is. Having a policy written in legislature that strictly monitors the insurance industry so patients are not taken advantage of would also be pertinent and required for me to support the law. As the death with dignity law continues to expand from state to state, I believe this law is something that we will eventually face in our careers as healthcare professionals. ReferencesWenstrup, B. (2017, May 18). Do No Harm: The Peril of Physician-Assisted Suicide. Retrieved June 20, 2019, from

The Family Research Council uploaded a presentation to their website titled Do. (2019, Aug 20). Retrieved from https://studymoose.com/the-family-research-council-uploaded-a-presentation-to-their-website-titled-do-essay 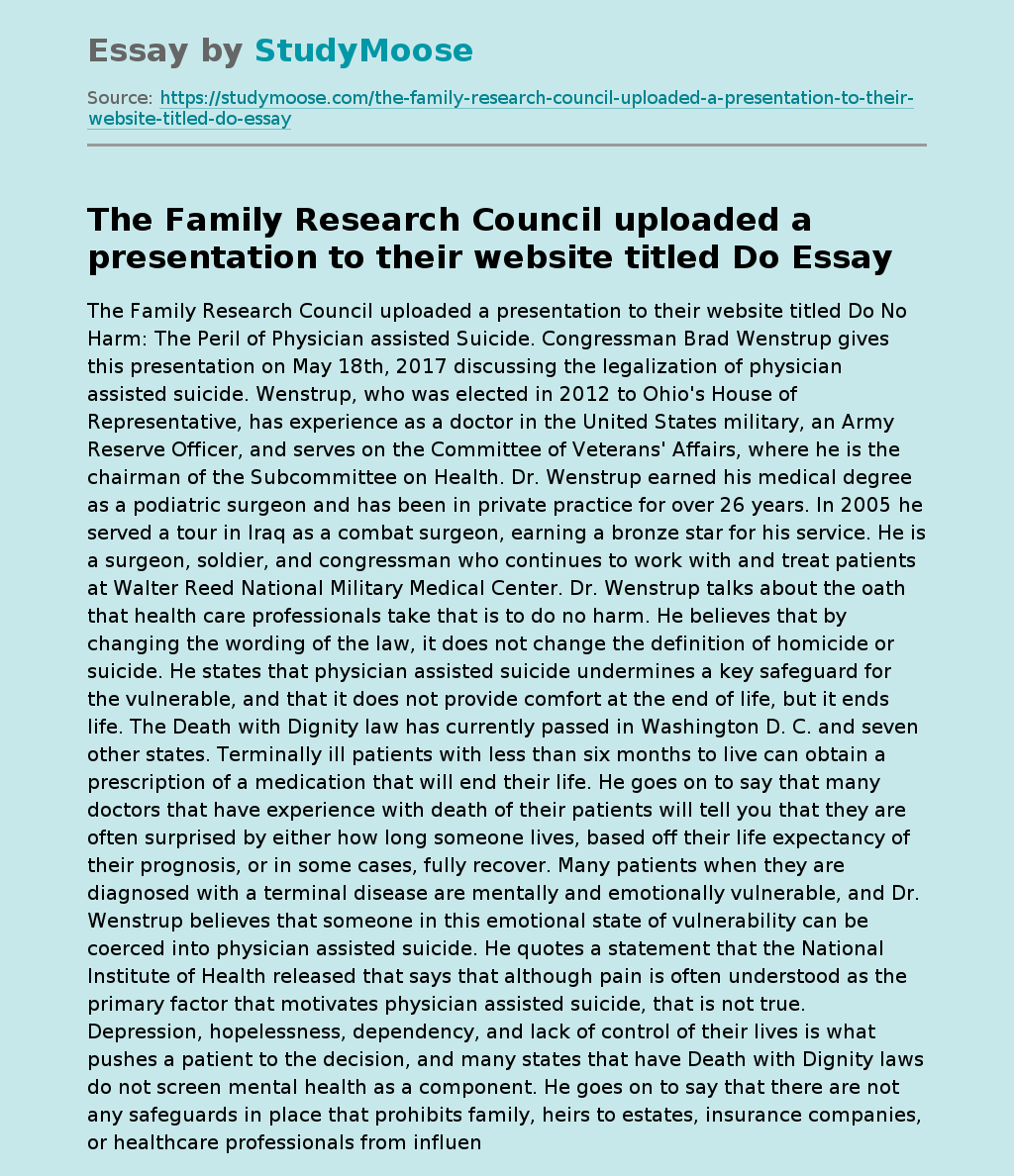