“The Emerald Forest” is a true story that illustrates unity, strength and incorporeality. The film is based on a young boy named Tommy, who was abducted by a tribe in the Amazon called “The Invisible People”. His dad, Bill Markham spends 10 years searching for him, until they meet by chance one day while Tommy was evading the “Fierce People”. The “Fierce People” also dwelled in the Amazon, and were the Invisible People’s enemies. When Tommy was finally able to bring his father to safety, he declares his refusal to return to his original family and civilization, claiming that he had become a member of the Invisible People.

Don't use plagiarized sources.
Get Your Custom Essay on The Emerald Forest Just from $13,9/Page

Bill is left in utter disbelief and resorts to the chief of the tribe to order Tommy to return home. The chief calmly responds by saying: “If I told a man to do what he does not want to do, I would no longer be chief.” His statement demonstrates that a true leader leads by example and not by command, which ultimately reinforces his people’s loyalty because they are given the freedom to be who they wish to be.

[“This admission gets to the very heart of the difference between “primitive” society and our own” (Proyect).]

I grew up in a culture that glorifies the image of the monarch; questioning the sovereignty of the royal family is taboo, and those who dare to cross the line face dire consequences. Unlike the chief of the Invisible People, whose role combines governing and leading his tribe, an absolute monarch – like that of Jordan – exercises supreme power over the land, with the presence of counterbalancing political parties and governmental institutions In contrast, the role of the Chief of the Invisible People extends far beyond exerting power. He is a counselor who offers his advice to those in need, while allowing them to behave as they deem fit. This cooperative community flourishes in isolation because it has been left intact despite the encroachment of a globalized civilization that promotes competition and what it calls progress. Their survival in the tough conditions of the Amazon rainforest is largely due to their refusal to live in a “dog eat dog” world. Instead, they reject submission to a hierarchy and enjoy a state of perfect equality and reciprocal support. Hypothetically speaking, all humans share universal themes in their lives; marriage and a familial life, feelings and passions, and a sense of belonging are among a few experiences common to all. Arguably however, there are two aspects that really differ; technology and spirituality. “Technology is the sum of the ways in which social groups provide themselves with the material objects of their civilization.”(1)

The Invisible People utilize their expertise in building knives, spears, bows and arrows. “Termites”, on the other hand, are viewed by the Invisible People as selfish individuals who cut down trees and exploit natural resources to satisfy their egoistic pursuits. Those who rely heavily on technology to avoid the toils of everyday life are compared to termites that eat away wood. Ironically, the primary reason behind Tommy’s kidnapping was because his father took him to the construction site of the dam he was building. The Invisible People saw it as an opportunity to rescue Tommy from his disturbed society, and offered to liberate him from the dominance of technology. The Invisible people value spirituality as a fundamental path and they essentially believe that miracles kept them safe. For instance, they use an eagle’s eye to see visions; the eagle helped Tommy find the waterfall when he needed to find the sacred stones. The chief used his healing abilities to cure Bill’s wound. Their marriage and funeral ethics are utterly different from ours. When someone gets married the groom must give his future father-in-law some of the sacred stones and is supposed to knock out his soon to be wife in front of the villagers and then carry her out into the forest until the ceremony begins.

When a death occurs, they mix the deceased blood with his ashes in a bowl and all of the villagers must drink the mixture. They believe by doing so they would keep the soul of the dead inside them, and that he would never be forgotten. The singing of a frog is believed to create rain. At the end of the movie, the survival of the Invisible People was dependent on the water of the dam; they prayed for the frogs to sing, their prayers were answered and the rainfall filled the dam and caused it to collapse. Tommy needed to undergo a specific rite of passage so he could become a man. He needed to survive an ordeal which required him to withstand the pain of deadly ants crawling and biting him all over his body. At the end of the painful night they dip him in water, and only then is when he becomes a true man ready to face the consequences and hardships of the world. “The true measure of any society can be found in how it treats its most vulnerable members.”(Gandhi)

In my opinion Tommy’s decision to stay living with the Invisible People was the right one. As tough as there life might be living in the vicious and brutal conditions of the Amazon, they still maintain a simple lifestyle. They live to hunt for food, get married, have children, and eventually when their time comes they die. “Man cannot become attached to higher aims and submit to a rule if he sees nothing above him to which he belongs. To free him from all social pressure is to abandon him to himself and demoralize him.”(Durkheim) Our globalized world lacks love and emotion. People are materialistic, they care about how much money they have and the size of the house they live in. We Westerners live a sensual lifestyle, and the only thing we care about is what people think of us. According to Sigmund Freud, there is no way to be truly happy in life, but believes that happiness is in every persons goal in life. Nonetheless, there are different aspects that affect a person’s happiness. Freud theorized that the duality of human nature emerged from two basic instincts: Eros and Thanatos.

He saw in Eros the instinct for life, love and sexuality in its broadest sense and in Thanatos, the instinct of death, aggression. Eros is the drive toward attraction and reproduction; Thanatos toward repulsion and death. One leads to the reproduction of the species, the other toward its own destruction. Freud would defiantly see more Thanatos in our civilization and Eros in the Invisible Peoples. The essence of man’s survival solely depends on the attainment of a sense of social belonging. Human beings are capable of enduring the harshest conditions, but dwelling in loneliness is potentially destructive. The economy has driven humanity to become obsessed with consumption; and as each man seeks to advance himself in the accumulation of wealth, the world witnesses a rapid decline in morality. This is not a modern-day trend. Questions concerning virtue, wealth and humanity have troubled philosophers and economists for centuries.

Karl Marx is amongst the most prominent thinkers who explored this theme; he witnessed a massive shift in social hierarchies with the expansion of the Industrial Revolution. There was a gap between the rich and the poor that widened as certain members of society indulged in a materialistic life. This explosion of inequality remains dominant in our lives today; “The ruling ideas of a society are the ideas of a ruling class.” Marx argued that the governing portion of society regulates the economy to satisfy their own interests: they are driven by their greed for wealth and have been blinded by materialism. To live a life of virtue is to rise above the fleeting pleasures of wealth and luxury, and to recognize that the human race will only flourish in a world that fosters cooperation.

Humans are naturally weak, unskilled, vulnerable and incapable of manipulating their surroundings; therefore their strength comes from their unity within society. Opinions vary, but from my viewpoint I can never live as an Invisible Persons style of living. Their kind of conduct needs extreme courage, strength and fortitude. On the other hand a person like Karl Marx would definitely want to live with the Invisibles, because they have what we lack; the power of one. Harmony and solidarity is what our culture should learn from the Invisible People. 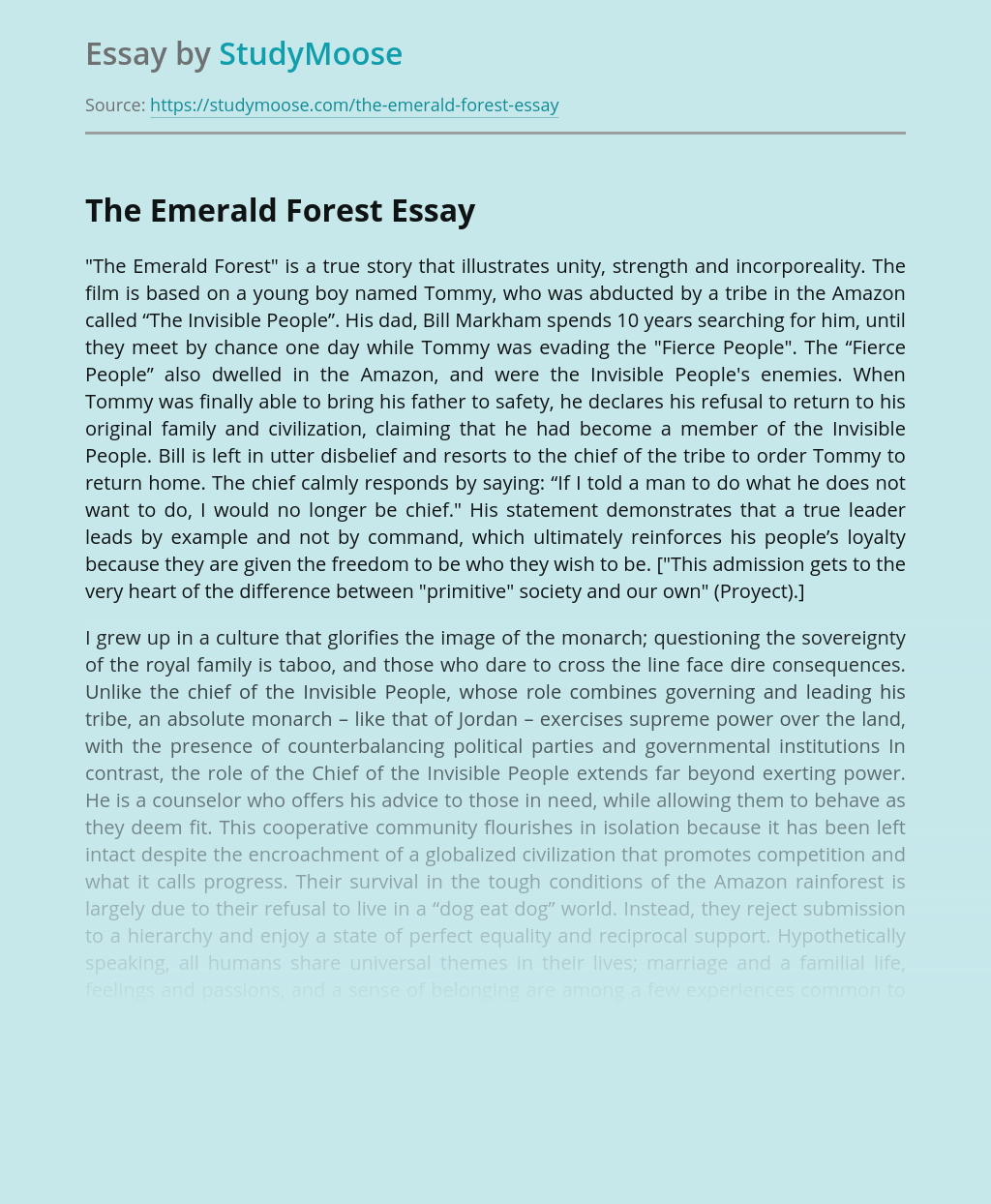 Romeo and Juliet - Play vs. Movie

Films are made with the directors different personal opinions based on the original source. In the movie version of Romeo and Juliet (1996, Leonardo DiCaprio), the above illustrates this perfectly. For this essay, I will discuss some of the contrasts between the original play, and the film. I hope you find this essay informative. First,...

Analysis essay of the film "Falling Down"

The film Falling Down is about a man named Bill that loses control of his anger and frustration when confronted with typical everyday stress. He has reached his breaking point and loses his cool as well as his sense of self. The movie demonstrates examples of both cultural and social issues. Cultural issues explored by...

‘I was afraid of you, Julius. I don’t see what I was afraid of. Now I see I was only hating my brother’. This quote Gerry made towards Julius, illustrates how the characters in the movie were afraid of change, and that it is possible to overcome that fear. This quote is important, especially in...

Plato, Descartes, and The Matrix

The Matrix movie had many similarities with the readings from Plato and Descartes. All three discussed the scenario in which reality was discovered to be a non-reality. Specifically, in The Matrix, reality that was experienced by multitudes of people is actually a computer simulation called “The Matrix”. This is actually a deviation from the Plato...