The Effects of Early Marriage

In the poem, “Betrothal in B Minor,” it implies that marriage is a war and a struggle in life. Getting married before the age of eighteen would be a huge struggle for the girl. In many countries, young girls between the ages of seven and fifteen are often married to older men by the force of their families. During this marriage, girls face extreme hardships including the lack of education, emotional adversity, and poor social skills.

The emotional and social effects of early marriage are varied, but one of the most common outcomes is the withdrawal of girls from formal education.

Don't use plagiarized sources.
Get Your Custom Essay on The Effects of Early Marriage Just from $13,9/Page

When a girl reaches the age around ten, her parents have already arranged a wedding for her and have taken her out of school to prepare the girl to be wed and to have children. At the age of ten a girl is not fully matured, nor is she well educated. Education is one of the largest losses to a girl if she is married young.

Not having a full education like other children brings many hardships to the girl.

Taking a girl away from school to marry and to have children limits her opportunities to develop as an individual. After getting married and having a child, a lot of times the girl will want to go back to school to further her education, but most schools will refuse to take in a girl if she is married or has a child. These girls that now have a family at a young age, have to work to earn a living, but since they are denied an education, they are not qualified for most jobs that are available around them.

Not only does a girl lose her education, but she also experiences an emotional adversity. From the point of birth, girls are made to think that their only job in life is to get married and to have children. Being forced to marry someone can often create unhappiness in both the male and female. If they are unhappy with each other then the relationship can turn in to an abusive relationship, causing things to become worse. Sometimes a girl can not take the abuse any more from her husband so she ends up committing suicide or running away with her children. More often the girl will runaway and find a distant relative to live with. When a girl runs away from her husband it brings shame upon the family and the family cuts the girl off from their lives. This leaves the girl alone even more than before.

Girls that marry young are often alienated from society, leaving them alone in life with no friends. A girl’s social status is very low compared to a male’s social status because girls were never looked upon as something great. Girls always had to work harder and received less food than the males. When a girl became ill, it was much harder for her to receive an immunization whereas a male gets sick and he receives an immunization almost immediately. These girls only have their husband and their children in their lives. A lot of times the husband is very abusive and is not a friend to the girl. Many girls die young from these premature relationships. Getting pregnant at a young age is also a problem for the girl because her body has not fully matured. Pregnancy is the leading cause of mortality in fifteen to nineteen year old girls worldwide.

The lack of education, poor social skills, and the emotional adversity are all effects of early marriage that lead to a poor life for an innocent child. In current years families have realized that young marriages are not good for children. Many interest groups have tried to make new laws in countries so that the legal age to marry is eighteen in order to save lives and create a better world for females.

The Effects of Early Marriage. (2016, Jul 08). Retrieved from https://studymoose.com/the-effects-of-early-marriage-essay 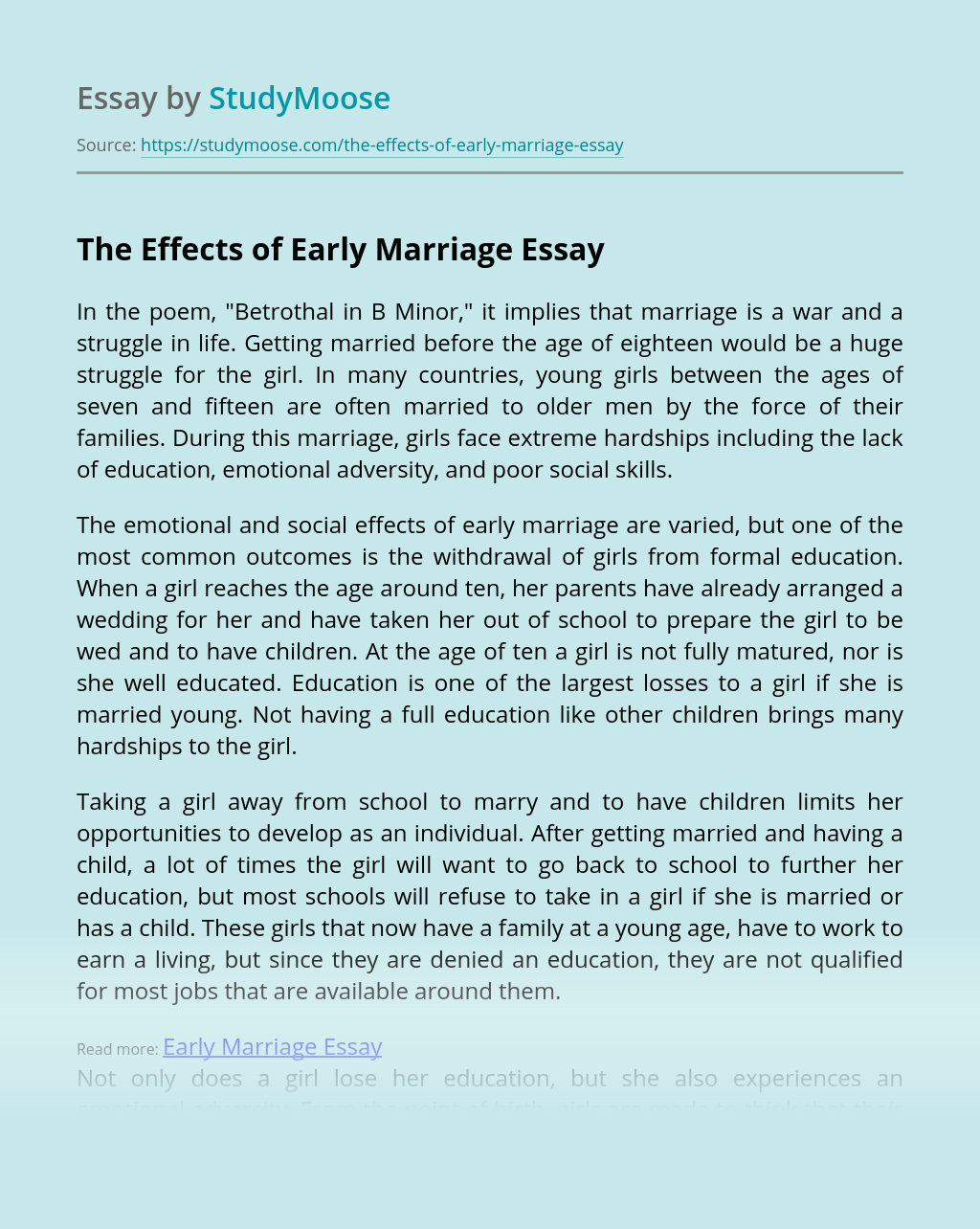 Canterbury tales: The Wife of Bath and the Pardoner

Kid Marriage: Why is the Act Performed Throughout Countries Worldwide? According to the International Center for Research Study on Women, “if present kid marital relationship trends continue, more than 142 million girls worldwide will be forced to marry adult men during the next decade-the equivalent of 38,000 ladies every day.” Kid marriage is specified as...

In Frank O’Connor’s short story “My Oedipus Complex” he writes about a young boy named Larry, who is use to his fathers absence because of World War I. Larry soon fines himself trying to take over his fathers house hold including wanting to marry his mother. When the war ends, Larry’s father returns home and...

The Beginning of the End Growing up I always believed divorce was the worst mistake a couple could make. Now that I am older I now have a different view on divorce. My parents divorced when I was seventeen years old, and since going through this experience I view divorce differently. Although most people think...

In my culture, you utilized to be required to be married in order to be dealt with as a grown up or a grownup. That principle had actually remained in my culture for more than a thousand years. As time changed, that principle has somewhat altered too. Nowadays, being married in an option. Many individuals...