Cause and Effect: Comedy Genre Films and its Audience

Genuine laughter is known by many to be the best universal medicine there is. It is the automatic cure for sorrow and sadness, the antidote to alleviate any emotional stress, the most inexpensive and may be argued as being the purest and most enlivening form of audible expression known to man. This has been the motivation of most forms of entertainment, along the lines of comedy and humor.

In terms of film and genre, the power of comedic punch lines and witty comic antics matched with superb timing has the will to command boisterous laughs and thought-provoking ideas through humor.

Don't use plagiarized sources. Get your custom essay on
“ Cause and Effect: Comedy Genre Films and its Audience ”
Get custom paper
NEW! smart matching with writer

Though film representation of what is funny may vary, the interpretations that follow pertaining to what is laughable can be stretched from taking a particular scene within approval or dismay, and even in praise or disdain.

The variant of comedy known as slapstick is probably the most identifiable form of humor in film. One of the earliest brands of comedy to be shown unto the silver-screen, slapstick’s effect on its viewers is indeed much more immediate and instantly and humorously stimulating.

Filmsite.Org explains slapstick to be:

This is primitive and universal comedy with broad, aggressive, physical, and visual action, including harmless or painless cruelty and violence, horseplay, and often vulgar sight gags (e.g., a custard pie in the face, collapsing houses, a fall in the ocean, a loss of trousers or skirts, runaway crashing cars, people chases, etc). (1)

A solid film case of such a comedy would be Chuck Russell’s The Mask (1994) which starred Jim Carrey.

He played Stanley Ipkiss, a local clerk of the Edge City bank, but upon his discovery of a rather supernatural item, in the form of a mask, it turns his life around, to say the least. As soon as he tries it on, he alters into a green faced, excessively fun loving, and extremely obnoxious individual.

With Carrey’s expressive comedic demeanor and delivery with the Mask’s rowdy character features, the slapstick comedy is very well executed, and the film’s effect on its audience is more instantaneous—highlighting its purpose to amuse. His untamed manner even portrays a cartoon-like conduct which tickles the mind into more of reacting than analyzing the scenes by the audiences.

On the other hand, there are films which rather choose to arouse audiences with a brand of high-browed comedy and almost insulting humor, still with the objective to entertain, but only in a different approach. Within the lines of cringe comedy, a comedy that is presented more on the lines of rather offensive depictions, the audience’s taste of comedy is tested. The interpretation of comedy indeed varies from the more traditional depiction of what is funny to how offensive a particular situation could be.

Take for instance Larry Charles’ Borat: Cultural Learnings of America for Make Benefit Glorious Nation of Kazakhstan which starred Sacha Baron Cohen. He played a Kazakh journalist who travels to the United States of America in attempt to experience the culture. But in the process, a series of cultural distortions are portrayed in the film, highlighting rather extreme and even distasteful situations wherein Cohen character, due to fictitious cultural gaps, would deliver outrageous comments and basically dare the social norms within his new environment. The film’s reception was one of debatable issue, and its content was deemed insulting by many, especially with the gender and racial issues.

As the meaning of what is funny could and would differ, a simple understanding must be made known to all viewers: comedy is a form of entertainment. Whether it offends, stimulates thought-provoking themes, irritates, or makes its audiences feel good, it is all up to the viewer. It is all in the matter of perception—from beliefs, orientation, and sensibility.

Cause and Effect: Comedy Genre Films and its Audience. (2017, Apr 23). Retrieved from https://studymoose.com/cause-and-effect-comedy-genre-films-and-its-audience-essay 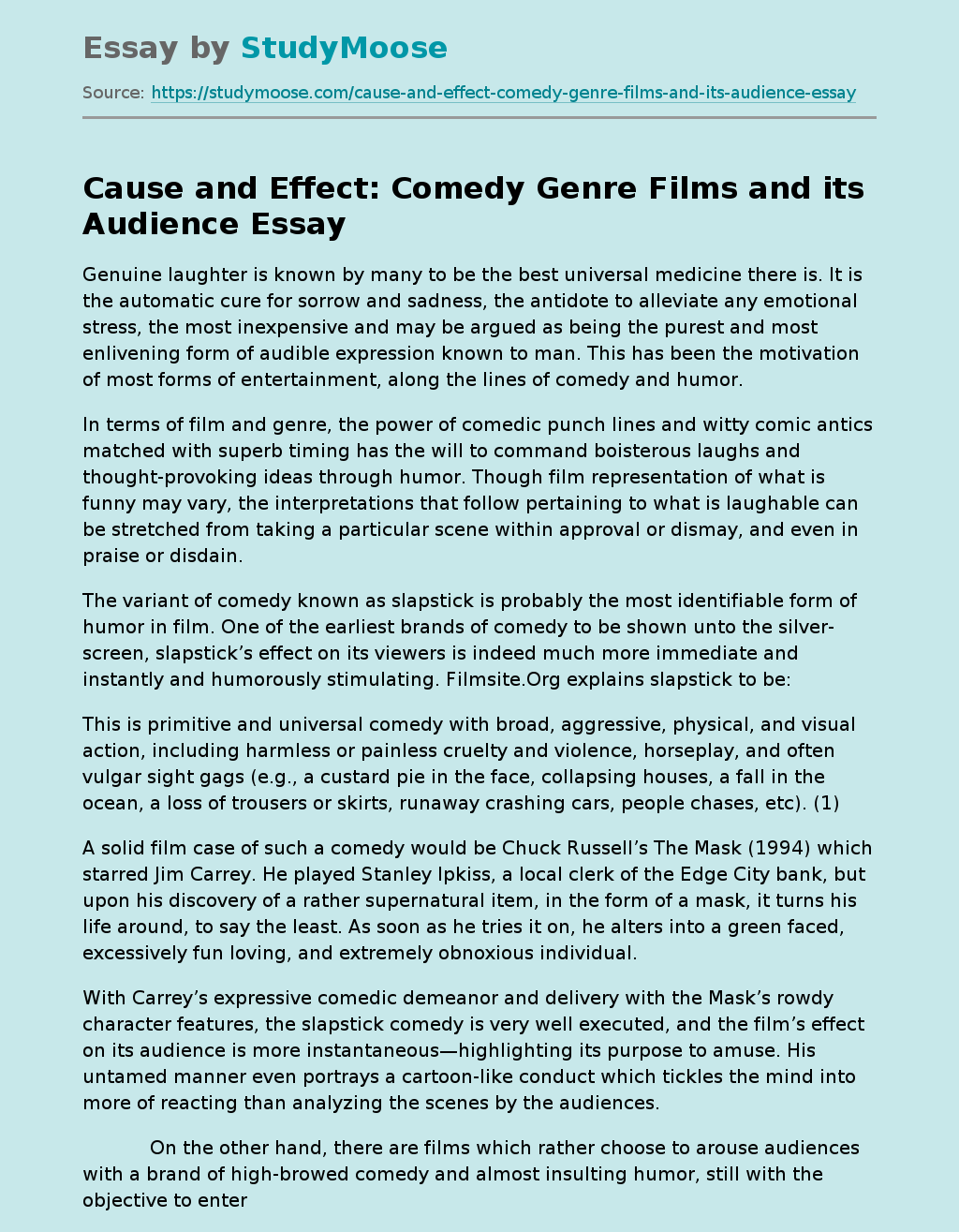