Cause and effect early pregnancy

Turn in your highest-quality paper
Get a qualified writer to help you with
“ Cause and effect early pregnancy ”
Get high-quality paper
NEW! AI matching with writer

Some teenagers who get pregnant early may experience anxiety, depression and other emotional problem. We know that teenager’s ages of 15-19 are still young so emotion and other feelings of being teenagers might occur. Some of the causes of early pregnancy among teenagers are lack of education especially sexual education, poverty, undergraduate, or problem with their family.

Lack of Education among teenagers should be given priority; I am agreeing that sexual education should be learned in school. To aware them from the effect that may occur.

This can cause a lot of endless problems in the life of the teen and the newborn child. There are a lot of things that can cause an unplanned teen pregnancy, such as teens experimenting with sexual encounters at a young age. Another major cause is the lack of guidance due to guardians that are blind or do not want to believe in such activities. These causes can have devastating effects on the teen and the newborn in the household. Some effects of early pregnancy will include an unexpected rise of responsibility for the teen and can cause many health concerns for both teen and newborn child.

Teens experimenting are the leading cause in the unplanned pregnancies. As a teenager in high school ages there are a lot of peer pressures. Such as experimenting with alcohol and unprotected sexual intercourse. Drinking and the use of narcotics also largely have an impact on the judgment of the teen before the pre-pregnancy comes about. Experimenting can cause many effects on the teen and the relationships at hand, including the relationships with the baby’s mom or dad and also the parents of the teens. Another way of experimenting is the pregnancy caused in the sequel of either a long-time dating of the boyfriend or the other case of those random one night stands or hook-ups. Experimenting can be well avoided which can cause less of a chance of the unplanned pregnancy.

Another very important concern for preventing teen pregnancy is having a good guidance throughout the teenager’s teen years. The guardians of the teens play a crucial role in guiding the teen to making the right choices in his/her life. The teenager then is faced with obstacles that would normally happen to a 20-30 year old woman. Not having the proper guidance will cause the teen to find the alternatives.

For example, finding someone to be with to be cared for by in replace of a strong guidance, by the guardians in the teenager’s life. For not having the proper guidance the teenager has a higher chance of dropping out or failing out of a school, such as being a high school dropout to have time to give birth and time to raise the young child. So by becoming pregnant at a young age and not finishing your education. It definitely doesn’t sound like too much fun, now does it? The guidance in life is the most important thing throughout so this can be less of an issue.

What makes it hard is when you need money for the simple things for the child, but you don’t have the time to get a job because you’re nursing and getting ready to bring a child into the world. So as a teenager you need a support system so that a newborn is taken care of in the safest, best place for the child. A lot of this early responsibility can be unbearable for some teens, expesically the ones that choose to get pregnant while they are still in high school.

With all of this going on in their lives it’s affecting the health risks and medical negatives a teenage pregnancy can cause. For example, there is an increased chance of mothers from ages 15-19 of birthing a child that is underweight at birth. A low birth weight will increase the chance of the newborn to have health risks. It is definitely not a great thing to have the chance of health risks in you or the child. Another way that the health problems can start is because teens might not have all the knowledge of proper behavior in knowing how to nurse the child or the proper ways during the growth of the child. Teenage adolescents tend to develop poor eating habits during pregnancy, they tend not to take the proper vitamins, and in the worst scenario the teen drinking and/ to doing drugs during the pregnancy. That is the worst that can be done; it will increase the chance greatly of the baby being born with some type of birth defect or a weak part of the baby. Now that can be the worst you can possibly do to an unborn child.

To wrap it all up, teen pregnancy is a major issue that should try to be prevented as much as it can. It causes countless, dodge able problems if the right choices are made and you have a good support system around you. It would be in the best advice to not take the chances to get pregnant as a teenager. It is not the age to get pregnant. Teens are not fully ready to become adults like the stress that follows during the pregnancy.

Cause and effect early pregnancy. (2016, Apr 30). Retrieved from https://studymoose.com/cause-and-effect-early-pregnancy-essay 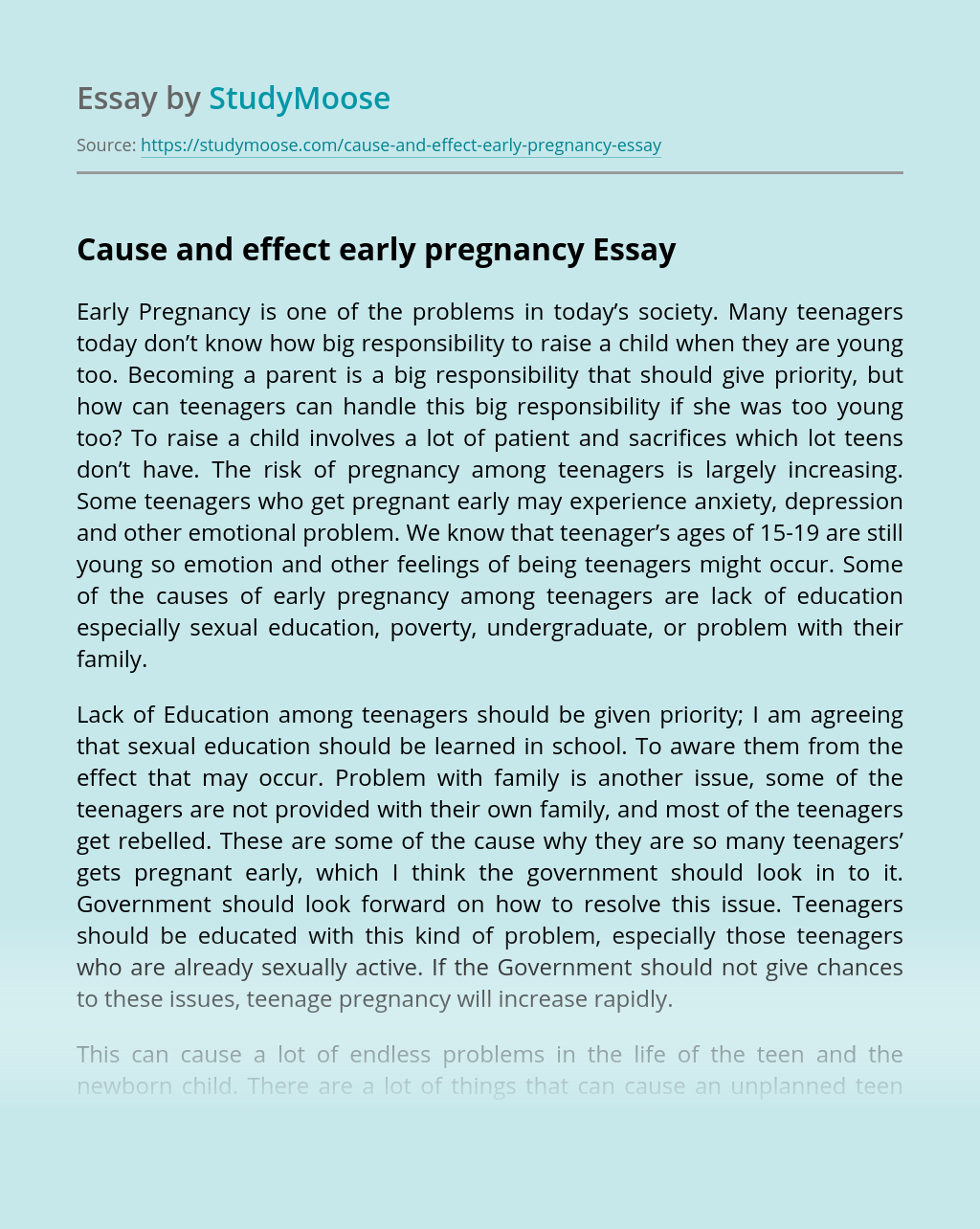 Turn in your highest-quality paper
Get a qualified writer to help you with
“ Cause and effect early pregnancy ”
Get high-quality paper
Helping students since 2015
Stay Safe, Stay Original