The Issue Of Teenage Pregnancy

When you are a little child you always imagine what life will be like when youre older. As a child you think you will grow up a singer, firefighter, policeman or something special; you don’t ever think that you will become a teen mother or parent. Teen pregnancy is becoming a complex issue in the United States (Klein, 2005). It not only affects the families of the teen parents, it also affects the government, health care, educators, and the teen (Klein, 2005).

Don't use plagiarized sources. Get your custom essay on
“ The Issue Of Teenage Pregnancy ”
Get custom paper
NEW! smart matching with writer

When a little girl grows up she always says that she wants to be a mommy one day like her own mother, but never states that she wants to be a teenage mother. Young pre-teens and teens from ages 12-18 are increasingly having babies these days. Even though they don’t know it their young age and stage in development will have a great impact on the growing infant. Being a teen mom will not only affect their lives, it will affect their babies.

Girls around the ages of nine until about sixteen years old go to puberty and menarche which is sometimes difficult for girls to understand and be comfortable with. Going through the developmental stage of puberty girls develop into young ladies and their bodies develop more; these developments are the ones that attract the boys. When girls are ready to explore them never really think about all of the outcomes of their actions. About one fourth of American adolescents have had intercourse by the age of fifteen years old (Klein, 2005).

Most of the time, an adolescents first time is without using contraception;63% of teens reported did not use a condom their last intercourse(Klein,2005) .This can be a huge factor with teenage pregnancy and the increased rates of STD’s. When teens have intercourse and experiment, they don’t think twice about getting pregnant or what could happen in the future.

Teen mothers are not full developed in their stage of development. Their brains and bodies are still immature and some aren’t even developed enough to hold a child. A child at the age of twelve is in their “awkward” stage in development when their body starts to look weird to them. Carrying a child at that age has serious risks due to the fact that the child does not have the body to carry an infant. With 20% of 740,000 U.S. teen girls getting pregnant a year, prevention strategies should be taken (Berk, 2012). Also, teen mothers often do not know they are pregnant until it is too late, which then they do not have a good start on the prenatal care of the baby. Most teen mothers still smoke, drink, and have inadequate diets that can cause complications to the infant (Berk, 2012).Teen moms also do not have the funds to get good prenatal care and care for themselves while they are pregnant. Poor prenatal care of the infant can suppress the development if the immune system and cause problems with the respiratory system (Berk, 2012). Teen mothers have a higher rate of having babies that are underweight, and there is a higher risk for Down syndrome in the fetus. The United States holds the record for the highest teen pregnancies in the world (Gallup-Black & Weitzman, 2004). The shocking part about teen pregnancy today is that it is lower than it was in 1991(Berk, 2012).

Teen pregnancy also has other leading factors to it that psychologist haven’t investigated yet. The new shows on TV called “Teen Mom” and “Sixteen and Pregnant” are factors to teen pregnancy are many ways. Teenage girls are watching these shows and saying “Oh this is all I have to do to get a show on TV” or “Wow I hope I can be a teen mom and go on that show!” Teen girls watching these shows look at the lives of other teens becoming parents but bypass the fact that they are struggling and look at the fact that they are making money for being teen mothers. Not only do the teens on these dreadful shows become TV stars, their faces start to become posted on all these different magazines such as “People” magazine or “Seventeen” magazine. This makes teen girls want to buy the magazine and influences them to get pregnant even more. MTV and other television stations should create shows on what teen pregnancy does to your life and to prevent teen pregnancy rather than have teen mothers flaunt their pregnancy around. The only positive thing about the show “Sixteen and Pregnant” is that it is more of a documentary and it does show that the teens are struggling and having a hard time being a teenager and a parent.

Adolescent teen mothers usually come from a low income or poor family. About 83% of teen moms who give birth are from a low income household (Klein, 2005). The economic circumstances of teen mothers are a huge issue. Due to the fact that most teen parents are not graduated high school and most of them end up dropping out of school, those being able to find a good job to support their new family are extremely difficult. Usually teen mothers and fathers find low-paying, unskilled jobs which can only provide the new baby with the basic necessities (Berk, 2012). Teenage mothers cannot work until about 6 weeks after the child is born, so they are more dependent on the teen father and their parents to support the teen and the baby they just delivered. Teen mothers not only have to deal with the stress of having a new baby, they also have to deal with stress of income and school.

Teen pregnancy is a huge issue in the United States and all around the world. Teens from the ages of 12-19 are having sex and most of them aren’t realizing the full consequences of intercourse without contraception and birth control. Condoms and birth control are free in many states and all a teen has to do is go to the nearest clinic and ask for them. With approximately 900,000 teenage girls getting pregnant every year in the United states (Klein, 2005), prevention measures should be taken. Teen moms do not realize that their bodies aren’t fully developed to carry children and that they are not fully mature enough to become a parent. Most teen moms become single mothers due to the fact that the teen father runs off because he cannot handle to pressures of parenting. Teenage girls are having children and not thinking about the drastic change that the child is going to have on them and their families. Even though 35% of adolescent pregnancies end in abortion (Gallup-Black &Weitzman, 2004); teens that have their babies are unaware of what being a parent is. Also, teen mothers are most likely to drop out of high school and then will not ever get the chance to see how the rest of their high school years, graduation, and college experiences would be. Their incomes will be lower because most fathers or mothers will not have a successful job. About 50% of teen parents have also had a criminal record or have been committed of some illegal offense (Berk, 2012).

Through these facts and main ideas stated in this research paper, teen pregnancy is clearly an issue and should be pronounced as an issue. There should be more methods of prevention taken so that teens get a clear view of what their life would be like as a teen parent. High schools and middle schools should address this issue to their students to help them realize what a great impact becoming pregnant as a teen has on them and their whole world. Teens should use condoms and learn more about what the actions and consequences of sex are before and while they do it. Also there should be more support group or other centers for teen moms to meet up and discuss how their lives have changed and support one another. Becoming a teen mother is not the end of the world, and the mothers should know that. Teen mothers need support and do teens without children to learn the changes and to prevent the other teens from having children at such a young age. Throughout this research and the articles supporting this research, teens should follow through and learn about prevention and contraception so they can become successful and live their lives before becoming a parent.

The Issue Of Teenage Pregnancy. (2019, Aug 19). Retrieved from http://studymoose.com/the-issue-of-teenage-pregnancy-essay 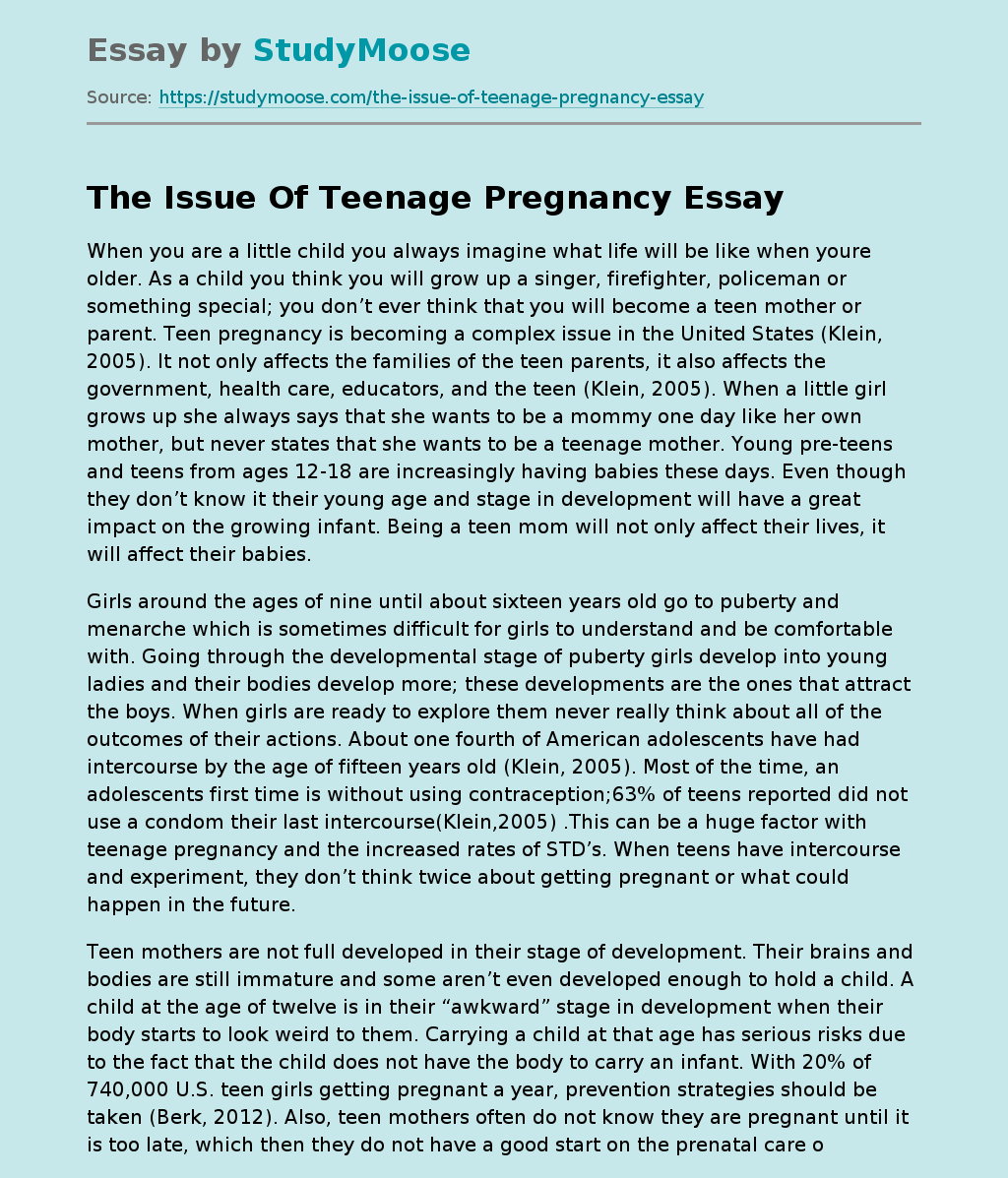