This Term Paper aims to discuss the effects of rising early pregnancy cases and how it affects our country. Teenage pregnancy refers to pregnancy in a female under the age of 20. It is one of the major factors that affect the population growth in our country, Philippines. It is considered to be the major problems of the government is facing today. According to the government statistics records, teenage pregnancy cases rise more than 70% over a decade. These alarming cases caught the attention of some lawmakers.

The only solution that the government made was the so-called Reproduction Health Bill (RH Bill). This bill aims to free access of use of contraceptives, fertility control, sexual education, and maternal care. The government conceived this as the solution to the said problem. Others may see it as helpful, but some also disagree about it. Teenage pregnancy is continously growing and affects our economic growth. Basically, teenage pregnancy occurs due to the following reasons: General rebelliousness, peer pressure and lack of self-esteem.

-There is rebelliousness of parents and of rules of adults. During the teenage stage, there is a burst of sudden and unknown emotions. Teens feel a natural sense of rebelling against the set norms and rules. Coupled with a sudden sense of fresh-found liberation and sexuality, results in giving vent to their feelings through sexual experiences.

-Peer pressure is another early stage of pregnancies. This pressure causes sexual intimacy for the opposite sex. If a child hangs out with a group who are sexually active, then there are possibilities that 9 out of 10 that teenager is sexually active.

-It is among the causes of teen pregnancy. Children who are not shown love and affection from parents will seek it out with their circle of friends (peer group). Many teenagers report feeling pressured by their peers to have sexual intercourse before they are ready.

“The 16 and Pregnant is an American reality television series that debuted June 11, 2009 on MTV. It follows the stories of pregnant teenage girls in High School dealing with the hardships of teenage pregnancy. Each episode features a different teenage girl, with the episode typically beginning when she is 4 and a half to 8 months into her pregnancy. The episode typically ends when the baby is a few months old. The series is produced in a documentary format, with an animation on notebook paper showing highlights during each episode preceding the commercial breaks. “ (Reference from wikipedia)

MTV is criticized for creating an acceptance of teen pregnancy. By creating a show about pregnant teens, the show’s creators may be sending the message to teens that it isn’t a big deal if they become pregnant. It is proven that teens are often influenced by TV. Actually, according to a study conducted by The National Campaign “most teens (79% of girls and 67% of boys) say that when a TV show or character they like deals with teen pregnancy, it makes them think more about their own risk of getting pregnant or causing a pregnancy and how to avoid it” (“Teen Pregnancy”). Parents feel that the popularity of “16 and Pregnant” will allow teens to think that teen pregnancy is acceptable.

The National Campaign states that “research has found that the sexual content in media can influence teens’ attitudes about sex and contraception and may also influence their sexual behavior” (“The National Campaign”). It is because of this statistic that MTV is teaming up with the National Campaign to Prevent Teen and Unplanned Pregnancy to create viewing guides on 16 and Pregnant. The 16 and Pregnant viewing guides will hopefully allow parents and educators to start discussions with teens encouraging them to make the right decisions when dealing with their sexual health.

Why teen pregnancy is a cause for concern?

The issue of teenage pregnancies is a cause for concern, and it is necessary that we draw the attention of the authorities to it’s diverse effects. According to statistics compiled in February 2004 by the National Campaign to Prevent Teen Pregnancy, 34% of teenage girls get pregnant at least once before they turn 20 (which is about 820,000 per year). Despite the fact that teen pregnancy rates are declining in the United States, this data illustrates the fact that the United States has the highest pregnancy rate in the industrialized world. Teen pregnancy has negative affects on teen parents, their children, and society in general.

Teen mothers are statistically less likely to continue their education through high school and college. In fact, only about 1/3 of teen mothers ever earn a high school diploma, and only 1.5% of teen mothers receive a college degree by the time they are 30 years of age. In addition to the decline of education prospects, teen mothers also have increased health risks. In fact, more than a quarter of pregnant teens report physical abuse in their relationships. Other health risks include disorders such as: anemia, hypertension, obesity, and sexually transmitted diseases (STD’s).

Anemia- Anemia is a disease where the number of red blood cells falls below normal and the body gets less oxygen as a result. Therefore, the body has less energy than it needs to function correctly. When the number of red blood cells decreases, the heart has to work harder, which means that it has to pump more blood in order to distribute oxygen throughout the body. As a result, one can develop a rapid heartbeat or another serious condition that enlarges the heart muscle, which can cause heart failure.

Hypertension- When someone has hypertension (also known as high blood pressure), the force of the blood against ones artery walls are too strong. Over time, this excessive pressure can damage your arteries as well as your heart and kidneys. Hypertension is rather dangerous, for there are no warning signs or symptoms unless the problem is severe. Hypertension can lead to strokes, and other deadly afflictions.

Obesity- While we all need some fat tissues in our bodies, having too much body fat is known as obesity. Obesity is a serious medical disease that affects about 14% of adolescents in the United States, and is the second leading cause of preventable death.

STD’s- Sexually Transmitted Diseases (STD’s) are diseases that are contracted and spread by having sex with someone who has one of the diseases. Sexual activity can include contact with the mouth, anus, vagina and penis (all of which are capable of giving as well as receiving STD’s). These can be serious illnesses and require immediate attention. Some STD’s, such as AIDS, are deadly and have no cure, therefore it is important to learn ways to protect yourself from STD’s such as: genital herpes, hepatitis B, chlamydia, syphilis, gonorrhea, and HIV/AIDS.

This has been known to lead to inadequate parenting, for one is too young to appropriately provide the kind of environment that children need to develop and mature properly. Eventually this will affect the children’s performance in school, for children of teenage mothers score lower than average on standardized tests, and are about twice as likely to repeat a grade at some point in their education. Children born to teen mothers are also twice as likely to be victims of abuse and neglect.

Because teen pregnancy rates are so high in the US. 34% of all females get pregnant at least once before the age of 20. This can cost our society billions of dollars each year, as the majority of teen mothers are single parents, lack a complete education, and end up on welfare. About $40 billion are spent by the federal government alone to help these families. 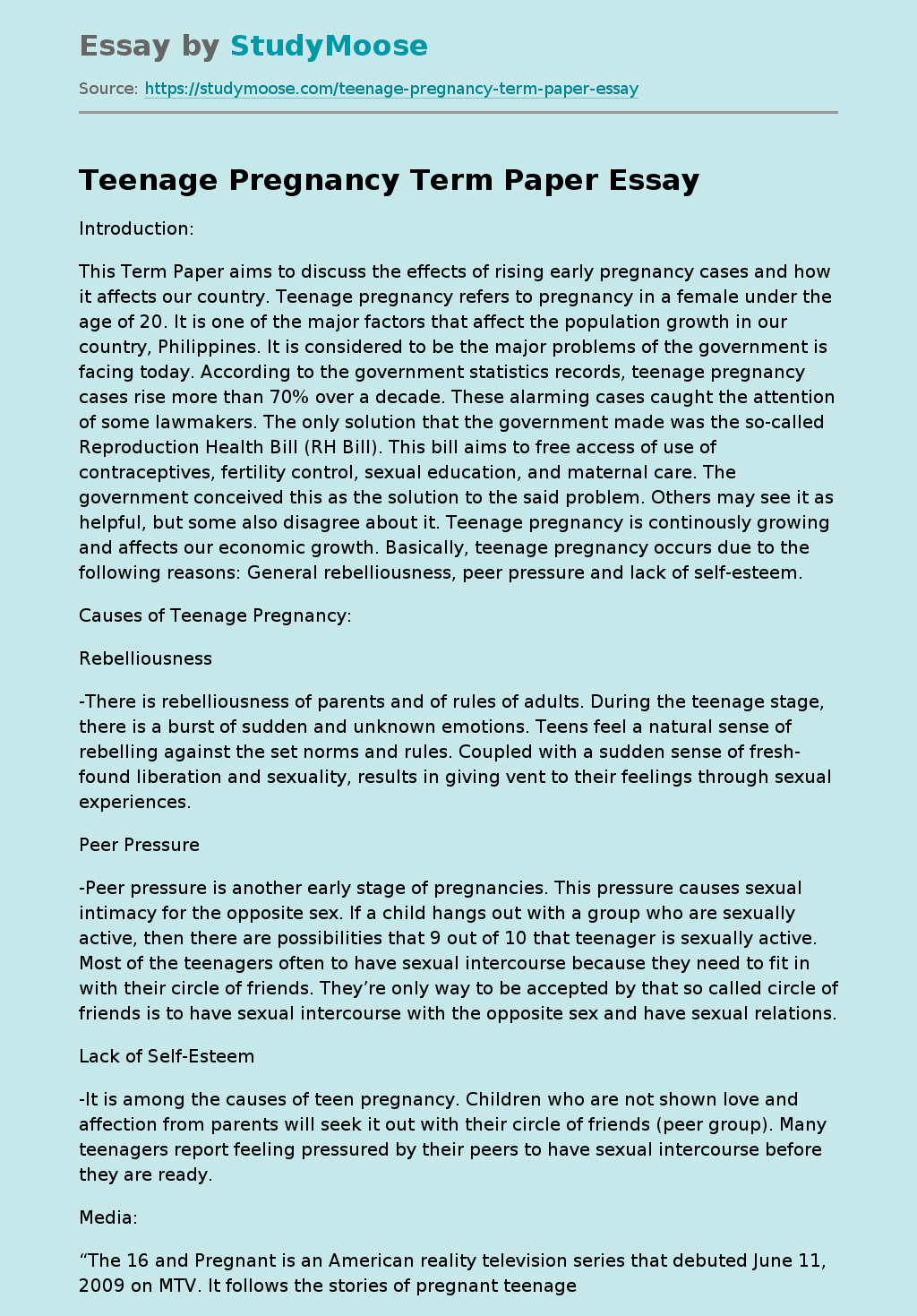