The Effect of Technology on Humanity in the "Brave New World"

Humanity can be defined as a combination of one’s own morals, benevolence, and experiences in life. There are a multitude of things that could quickly diminish humanity, including technology. In many instances, technology could be a positive impact to society. However, if used for the wrong reasons, it could be a catalyst in the eventual disfigurement of humanity. In Brave New World by Aldous Huxley, one of the most important aspects of human life is the technology involved in the World State.

Don't use plagiarized sources. Get your custom essay on
“ The Effect of Technology on Humanity in the “Brave New World” ”
Get custom paper
NEW! smart matching with writer

In the novel, technology has a negative relationship with humanity as seen through various types of technology such as, scientifically generating children, hypnopædia, and Soma. One of the most important aspects of an individual’s humanity is their benevolence. Most of the time, an individual will develop their good-heartedness based upon life lessons provided by parents. In the novel, however, the children are scientifically developed in a lab through a process called “bokanovskification.”

This process is used to increase the number of embryos generated from just one ovum.

(Huxley, 1932, p.17). Towards the beginning of the novel, the Director of the fertilizing center gives a tour to children in which they are flabbergasted at the mention of the word ‘parent.’ The Director is forced to explain, “’In brief… the parents were the father and the mother’” (Huxley, 1932, p.32). The citizens have little knowledge on what a family is, which means that the important life lessons that should have been communicated by the parents have not been. The citizens must rely on the false sense of humanity that was given to them by the government in their fertilization process.

Additionally, in this section of the novel, Huxley greatly speaks upon the topic of technology and how it can make an individual even less of a human. In the process of bokanovskification, the scientists will categorize the embryos into certain hereditary classes. The Director describes the creation of the lower castes: “‘Reducing the number of revolutions per minute…The surrogate goes round slower; therefore passes through the lung at longer intervals; therefore gives the embryo less oxygen. Nothing like oxygen-shortage to keep an embryo below par’” (Huxley, 1932, p.24). Essentially, their humanity is superficially created for them through the scientific process which means that the human does not have the ability to improve or alter their humanity.

Today, this can be seen through the dangers of gene splicing to cut out certain diseases in offspring. If this technology is used incorrectly, this will create a negative impact on what it means to be human and the child will not get to decide for themselves who they want to be. Ultimately, by creating these children in the lab, they are taking away their ability to shape their own benevolence which damages their humanity. Secondly, humanity is centered around the decisions that an individual may make and the morals that are developed. In the novel, the citizens are incapable of making their own decisions due to conditioning. The process of hypnopædia is described as, “’They’ll have that repeated forty or fifty times more before they wake; then again on Thursday, and again on Saturday. A hundred and twenty times three times a week for thirty months…’” (Huxley, 1932, p.35). If a human is taught how to perfectly act, then the worth of one’s humanity will diminish. People will not be focused on being good because they will be previously manipulated to act or believe a certain way. In this sense, Huxley is showing how technology can be utilized to brainwash and diminish the worth of a human. A real-world example of this could be Pavlov’s conditioning, in which the brain responds to a certain neutral stimulus upon sound or sight. Furthermore, the conditioning does not allow one to know right verses wrong. In one scene, nosy children are watching over John the savage’s deathly ill mother in the hospital which he describes as disgraceful. The nurse replies, “’Disgraceful? But what do you mean? They’re being death-conditioned.’” (Huxley, 1932, p.184).

The children, who do not know they are doing wrong, are being taught that death is normal to escape the mourning that may prolapse one’s death. They will not be capable of developing what is right or wrong nor grow as a person due to another’s death. An individual’s humanity will be directly affected since they will not be learning from certain aspects of their life. All in all, the individuals will not be capable of learning from their mistakes or knowing right verses wrong which leads to the disfigurement of humanity. Lastly, perhaps the most controlling type of technology, Soma, greatly impacts the experiences of the citizen. Soma functions as a drug, in which the citizens have been conditioned to believe is an all-powerful substance to solve all their problems. A large part of the development of one’s humanity is the perception that a person has about the world. To be truly human, one must be capable of understanding the suffering as well as the evil of the world. In the novel, the citizens describe their escape as, “…the warm, the richly colored, the infinitely friendly world of soma-holiday. How kind, how good-looking, how delightfully amusing everyone was!” (Huxley, 1932, p.79). The power of Soma is putting the citizens in a trance where nothing can harm them mentally. This creates superficial happiness and blocks out suffering. There is no possibility of knowing what true happiness is if one does not know the feeling of true sorrow.

The citizens are unable to truly formulate their humanity because they do not have a worthy perception of the world around them. The technology, overall, has a harsh impact on humanity because it disfigures what it means to be human, which Huxley is attempting to state multiple times in the novel. Moreover, Soma is utilized so frequently that there is not a moment in which the characters are able to fully view the world on their own free will. It is not uncommon to hear one character telling another, “‘…you look glum! What you need is a gramme of soma’” (Huxley, 1932, p.65). The perception of the outside world is majorly misguided and one’s humanity has little ability to progress and be worthy when it is forgotten. A real-world example of this would be drugs, alcohol, sex, and other items with addictive qualities, which blur the perception that one may have of the universe. If perception is disfigured, then humanity is not worth anything.

Overall, technology, as shown by Huxley, can greatly discolor one’s view of the world which prohibits them from improving their humanity. In closing, scientifically generating children, hypnopædia, and Soma are all forms of technology that document a negative impact on the humanity of society. Huxley is attempting to show how technology can greatly diminish a human’s worth and make an individual much less human. Huxley repetitively states how technology can erase the perception, worth or even identity of a person. This is like today’s society and it could be argued that it also has a negative impact on humanity today. All in all, the relationship between technology and humanity is entirely negative and could lead to drastic measures if it is not controlled.

The Effect of Technology on Humanity in the "Brave New World". (2021, Aug 16). Retrieved from https://studymoose.com/the-effect-of-technology-on-humanity-in-the-brave-new-world-essay 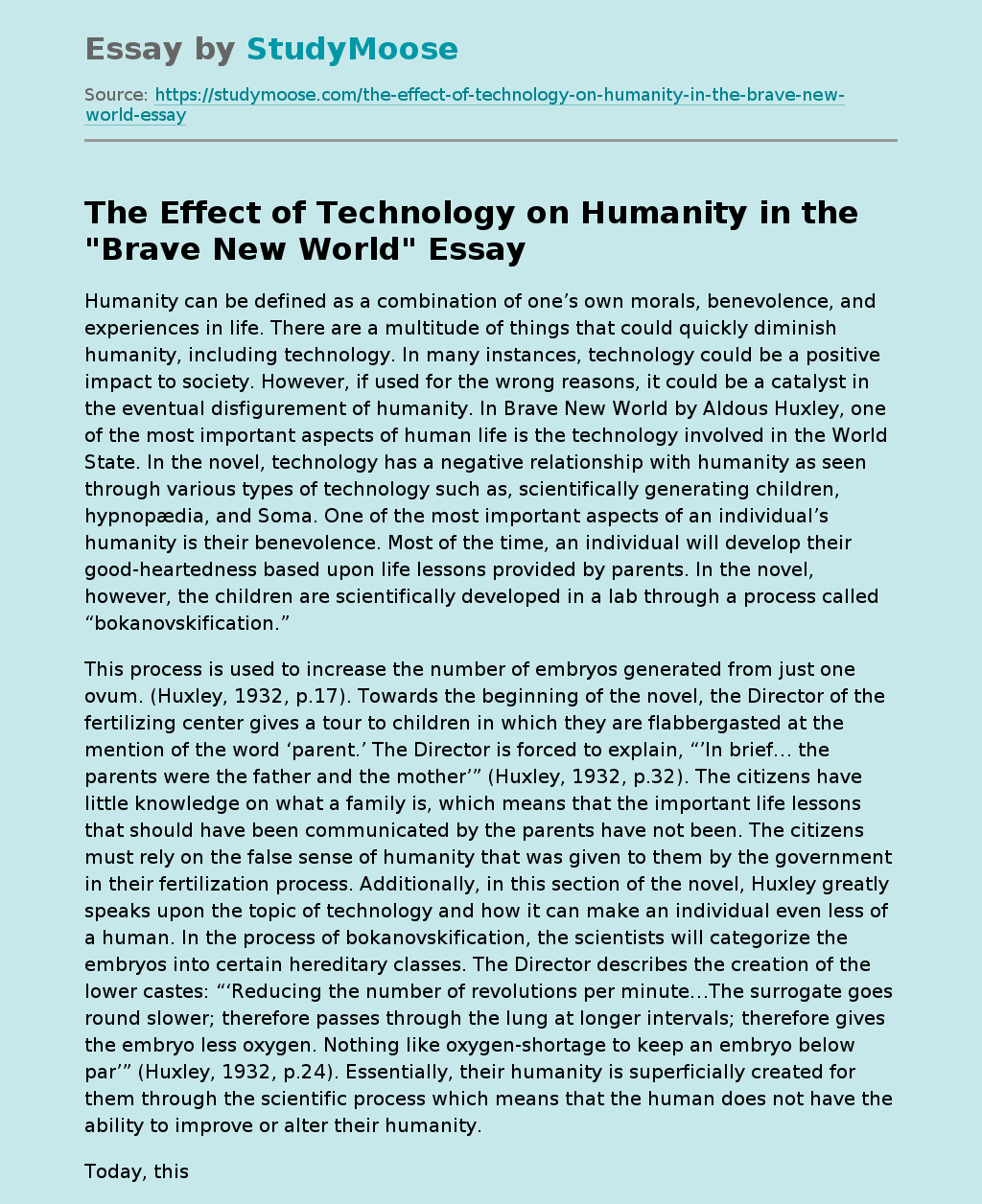