The Effect of Colonialism in V.S Naipaul's Miguel Street

“The man is so colonized that he abandons his native Trinidadian identity” (Beck, 2002). Although pertaining to the character B. Wordsworth, in V.S. Naipaul’s Miguel Street, this quote can be used to describe the very meaning of the book itself. It can be used to provide a clear picture of what was happening in British occupied Trinidad. Other characters such as George, a raging drunk who beat his wife and children, Elias, George’s son, and Naipaul himself can be used to accurately describe the effects of colonialism on the people of Trinidad.

Don't use plagiarized sources. Get your custom essay on
“ The Effect of Colonialism in V.S Naipaul’s Miguel Street ”
Get custom paper
NEW! smart matching with writer

In Chapter 3 of Miguel Street, George and the Pink House, George opens a bar and gets his daughter Dolly married to a man named Razor. While giving a speech after the wedding he makes a humiliating remark about his daughter, “Dolly, you married, it true. But don’t think you too big for me to put you across my lap and cut your tail” (Naipaul, p. 22). He does this not to deliberately disgrace his daughter, but to amuse the American soldiers and sailors that were in the house.

He did it because they were his “superiors”. Trinidadian natives had a sense of inferiority among themselves. They felt that the Americans and Europeans were a superior race. Naipaul included this story of George and his daughter to provide an example of this. A man disgraces his daughter in front of American soldiers in order to entertain them. This is what colonialism does.

“One thing I certainly do not want to do: go back to Trinidad”.

Naipaul himself says that he does not wish to visit Trinidad again. He feels that he has lost his identity. He can’t decipher who he is, “I very much want to go to India. But there are many difficulties. I cannot be employed on the Indian side because I am British, and on the British side I cannot be employed because I am not English”. Naipaul tells us that he is neither Indian nor British, yet he refuses to return to Trinidad. He does not wish to return because “He is unable to withstand the pressures of changing social orders”. He left because there was no meaning to his existence there. He tells us that “Miguel Street examines a colonial society in which the characters traditional values have no organic connection with the social environment and their quest for a meaningful existence seems to be denied” (Cudjoe, 1988). The people of Trinidad have lost their meaning, their traditions, and their culture.

In Chapter 7 of Miguel Street, The Coward, Naipaul is walking down the street when he approaches an American. “The American behaved in a surprising way when I sprinted down to ask, “Got any gum Joe?”. He mumbled something about begging kids and I think he was going to slap me or cuff me” (Naipaul, p. 52). V.S. Naipaul had included this to tell us that begging the Americans was a normal thing. It was not frowned upon but seen as an everyday thing for the people of Trinidad. The term V.S. used was “surprising” when he described the American man’s behavior toward V.S. begging him, indicating that begging an American was not something surprising or even embarrassing for the Trinidadians, but it was actually surprising that the American reacted in such a way. The people of Trinidad have become so accustomed to being second-class citizens that they accept their inferiority to the Americans.

In Chapter 4 of Miguel Street, His Chosen Calling, Elias tries and fails at becoming something other than a garbage collector. But at the end he accepts the job as a cart driver and he is content with it. He loses all ambition and settles for a job picking up trash from the street. He says “This is the practical. I really like the work” (Naipaul, p. 31). This quote was added by Naipaul to describe what a “high class” job was for the people of Trinidad. He tells us that a boy, who was set out to be a doctor, became a cart driver and was happy with it. The people of Trinidad do not even know that they are strangers within their own country that get the jobs that no foreigner would want and yet they see these jobs as “glamorous” (Naipaul, p. 24) The people on Miguel Street do not even speak their own native tongue.

They speak the language of the foreigners. V.S. even writes the way they speak in order to tell us that no matter how bad their English is, the people of Trinidad choose to speak it. They even adopt English names, such as Hat and Bogart, two characters in Miguel Street. They are stripped of their dignity. They find status in jobs such as garbage collecting. Their schools are inferior to British schools. They beg white people for gum and pennies. They are oppressed and they do not even know it. They have no idea what is happening to them as their culture, language, and country is stripped away from them.

Naipaul wrote Miguel Street because he wanted to tell the world what colonialism actually is. It is not a country that is simply ruled by an imperialist nation. It is much more than that. It is the everlasting scar that the oppressing nation leaves behind that is the true meaning of colonialism. Naipaul had realized this and thus began to write Miguel Street, the biography of colonialism itself.

The Effect of Colonialism in V.S Naipaul's Miguel Street. (2016, Sep 29). Retrieved from https://studymoose.com/the-effect-of-colonialism-in-v-s-naipauls-miguel-street-essay 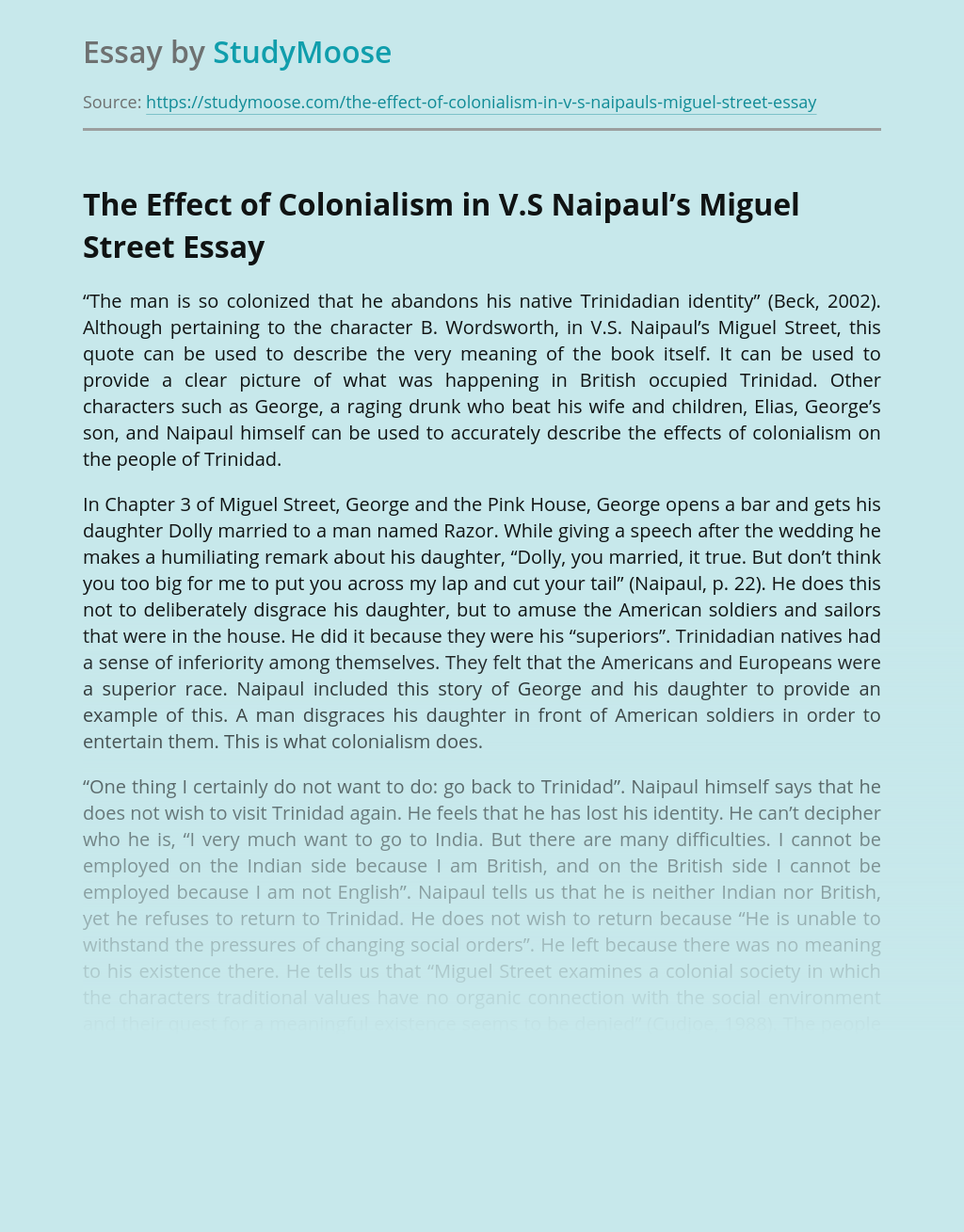