Colonialism in The Tempest

Background Information: In 1609 a fleet of nine ships set out from England, headed towards John Smith’s Virginia colony, the first English settlement in the New World. One of the nine ships was separated during a violent storm and ended up on Bermuda. These shipwrecked Europeans began colonizing the island and enslaving the native population. Shakespeare’s Tempest is based on this incident. For over a century, a number of critics have tried to interpret the various elements of post colonialism present in the Tempest.

Don't use plagiarized sources. Get your custom essay on
“ Colonialism in The Tempest ”
Get custom paper
NEW! smart matching with writer

In 1818, the English critic William Hazlitt was the first to point out that Prospero had usurped Caliban from his rule of the island and thus, was an agent of imperialism. This view provided the basis for modern interpretations of the Tempest as a post colonial work. Shakespeare’s Tempest is an amalgam of various pots colonial elements: Prospero is a European who has taken charge of a remote island, being able to do so because of his strong magic powers.

With these powers, he organizes a life for himself, gets the local inhabitants (Ariel and Caliban) to work for him, and maintains his control by a combination of threats, spells and enchantments, and promises of freedom some day. By taking charge of a place which is not his and by exerting his European authority over the strange non-European creatures, Prospero can be seen as an obvious symbol for European colonial power. However, Caliban is perhaps the strongest symbol of Post colonialism. Caliban, a native of the island, regards himself as the rightful owner of the place.

He bluntly states: “This island’s mine, by Sycorax my mother, which thou takest from me. ” He is forced against his will to serve Prospero and Miranda. Initially, Prospero extends to Caliban his European hospitality, teaches him language, and, in return, is shown all the natural resources of the island by Caliban. But Caliban refuses to live by Prospero’s rules, tries to rape Miranda, and their relationship changes to one of master and slave. Shakespeare represents as Caliban as an “ignoble savage. ” When Trinculo first encounters Caliban, he views him as some kind of monster.

After recoiling in horror from Caliban, Trinculo considers bringing the monster back to England where he can be displayed in a freak show: “Were I in England now, as once I was, and had but this fish painted, not holiday fool there but would give a piece of silver: there would this monster make a man; any strange beast there makes a man: when they will not give a doit (coin) to relieve a lame beggar, they will lay out ten to see a dead Indian. ” Trinculo is referring to the practice of “exhibiting” Indians for money in late 16th century England.

Such “freak shows” were highly profitable investments and were a regular feature of colonial policy under King James I. Caliban tries to help Trinculo find food, who might liberate him from Prospero, his current master and lord of the island. Caliban unctuously says: “I prithee, let me bring thee where crabs grow; And I with my long nails will dig thee pig-nuts; Show thee a jay’s nest, and how to snare the nimble marmoset; I’ll get thee To clustering filberts and sometimes I’ll get thee young scamels from the rock. Wilt thou go with me? ” Powhatan, the native chief, had provided the same services to John Smith’s colony.

After half of the colonists died in the first year, Powhatan took pity and taught the colonists how to plant corn, beans, pumpkins, and squash. However, once the starving British colonists recovered their strength, they once again set about the task of enslaving the native population. The play ends with Prospero deciding to return to Europe and to decolonize his island and emancipate his slaves. The colonizer sets himself free as well. Prospero not only gives up his island, but relinquishes his magical powers that enabled him to control Caliban.

Colonialism in The Tempest. (2016, Jul 20). Retrieved from http://studymoose.com/colonialism-in-the-tempest-essay 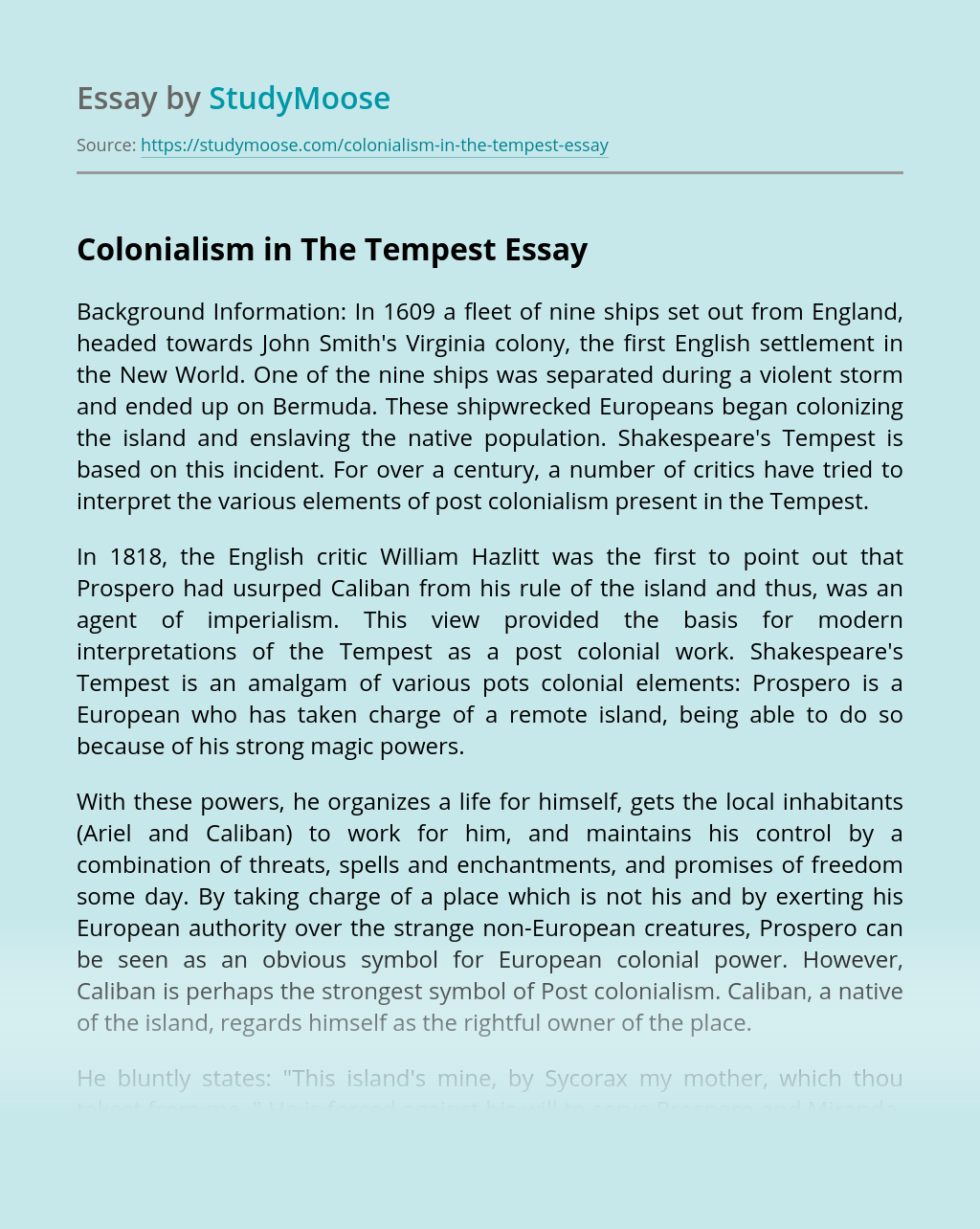