The Driving Force Behind Macbeth

Throughout the play Macbeth by William Shakespeare, Macbeth takes part in many self-destructing acts driven by many external forces, among which the witches’ prophecies are most influential. The three weird sisters initially led him to believe he is soon to be the king of Scotland. The idea the witches planted in Macbeth’s head, “all hail, Macbeth, that shalt be king hereafter!” (I, iii, 50), began his conceded way of thinking. With this new false knowledge, Macbeth’s conscience begins to disintegrate and he decides that he must do anything to fulfill his destiny to be king.

Don't use plagiarized sources. Get your custom essay on
“ The Driving Force Behind Macbeth ”
Get custom paper
NEW! smart matching with writer

Ironically, this highly respected warrior who once was the king’s most loyal knight, suddenly is becoming a malicious animal willing to rip away the life of any person or thing impeding him from achieving his potential greatness. One main contribution to this change in priorities is the knowledge gained from the witches of Banquo’s sons becoming heir to the throne. This is viewed as a threat to his success, providing an incentive to carry out the murder of Banquo and Fleance, which was the goal of the witches.

When thinking of ridding of Banquo, Macbeth declares to himself, “ Which in his death were perfect” (III, i, 115). This gives him a false sense of security knowing that he no longer has to compete for the throne. To complete this act all morals are put aside, parallel to his original decision to promote his self desires above all else. Of the three apparitions presented by the witches, one concerned with the disloyalty of Macduff seals Macbeth’s fate; leading him to take drastic measures against Macduff and his family.

When going to carry out this act, Macbeth states, “ This deed I’ll do before this purpose cool” (IV, I, 161). This shows that he feels urgency to commit the murder in a timely matter, before he has the chance to think twice. Although murdering an entire family would seem absurd to an average person, Macbeth finds no wrong in it, as he can only focus on becoming king. The predictions that the witches have led the naïve Macbeth to believe are the main influences that lead him deeper into his inevitable, corrupted future of self-destruction and denial.

The Driving Force Behind Macbeth. (2016, Mar 23). Retrieved from https://studymoose.com/the-driving-force-behind-macbeth-essay 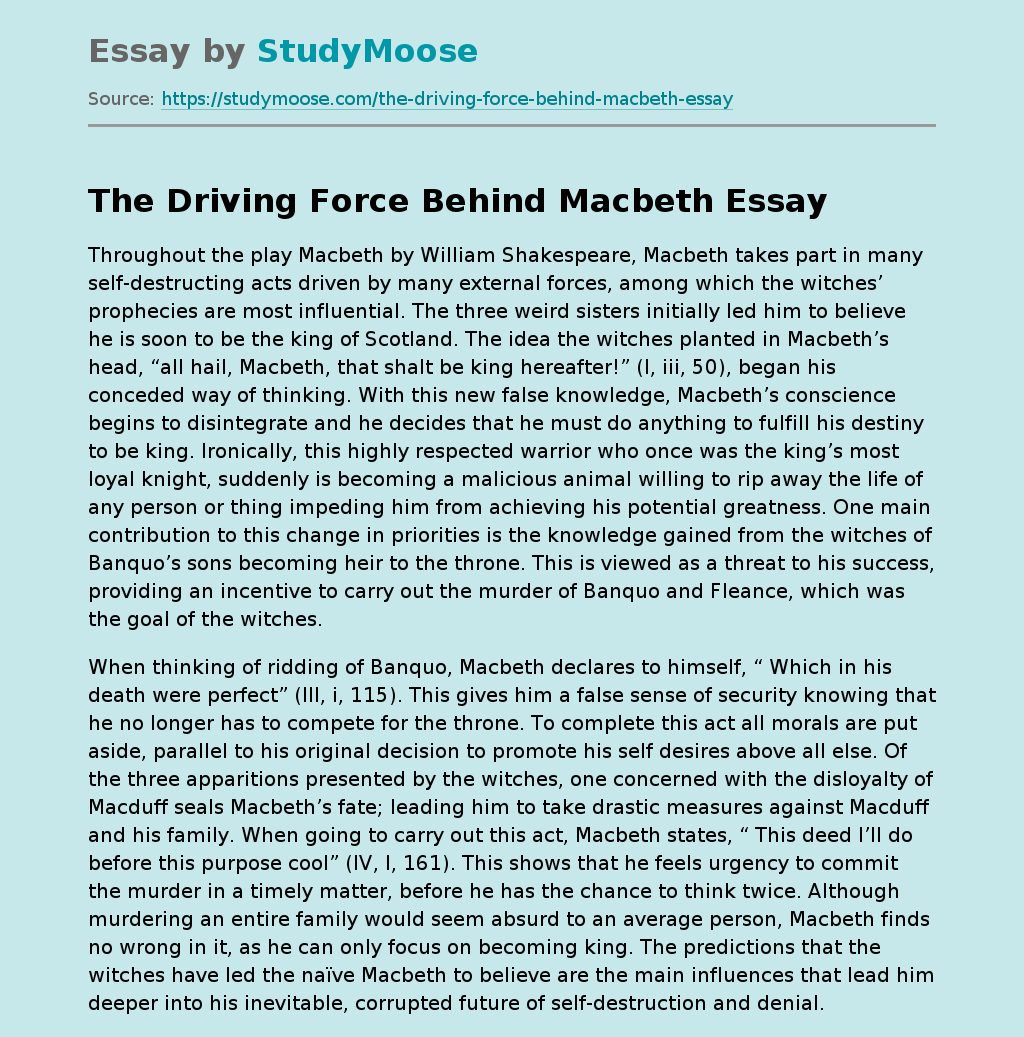