* Drive – A fast and low shot that makes a horizontal flight over the net. * Drop – A shot hit sonly and with finesse to fall rapidly and close to the net on the opponent’s side. * Fault – A violation of the playing rules, either in serving, receiving, or during play (sees common faults listed below). * Flick – A quick wrist and forearm rotation that surprises an opponent by changing an apparently soft shot into a faster passing one; used primarily on the serve and at the net.

Don't use plagiarized sources. Get your custom essay on
“ The Different Skills Used in Playing Badminton ”
Get custom paper
NEW! smart matching with writer

* Hairpin Net Shot – Shot made from below and very close to the net with the shuttle rising, just clearing the net, and then dropping sharply down the other side. The shuttle’s flight approximates the shape of a hairpin. * Half court Shot – A shot hit low and to midcourt, used effectively in doubles against the up-and-back formation.

* Kill – Fast, downward shot that cannot be returned; a “put away.” * Let – A legitimate cessation of play to allow a rally to be replayed.

* Match – A series of games (at U.S. Olympic Festival-’93 it is three out of five), to determine a winner. Midcourt – The middle third of the court, halfway between the net and the back boundary line. * Net Shot – Shot hit from the forecourt that just clears the net and drops sharply. * Push Shot – Gentle shot played by pushing the shuttle with little wrist motion, usually from net or midcourt to the opponent’s midcourt.

* Rally – this occurs when the players hit the bird back and forth several times before one side scores a point * Serve or Service – players put the shuttlecock into play for points by “serving” it to opponents, hitting it over the net into a special part of the court near their opponent * Smash – when a shuttle is floated high into the air, a player has time to unleash a powerful overhand shot straight to the floor of the opposing court * Wood Shot – Shot that result when the base of the shuttle is hit by the frame of the racquet.

Once illegal, this shot was ruled acceptable by the International Badminton Federation in 1963.

Racquet – used to hit the bird, the racquet is shaped like a tennis racquet and has strings, but weighs much less. The frame of the racket, including the handle, is not to exceed 680 mm (26.75 inches) in overall length, and 230 mm (9 inches) in overall width. The overall length of the head is not to exceed 290 mm. Most racquets are made from light man-made materials such as aluminum or graphite, and are strung with synthetic material such as nylon.

Shuttle, Shuttlecock, Bird, Birdie – whatever it is called, it is badminton’s version of a tennis ball. It has a small ball at the front to give it speed, and feathers protruding from it to help it float when it is hit high into the air. An official shuttlecock must have 14-16 feathers and are usually made from a goose or duck and from the left wing of the bird only.

Shoes – special court shoes are worn to allow players to move quickly across the court, and to give them traction for quick movements around the court.
Badminton Court Dimensions
The overall dimension is 20 feet by 44 feet, marking the sidelines for doubles play and long service lines for singles play.
The Net Line
The net line marks the middle of the court where the net is placed, creating a 22 feet by 20 feet area on each side of the net.
The Badminton Net
The top of the badminton net is hung 5 feet above in the center net line. 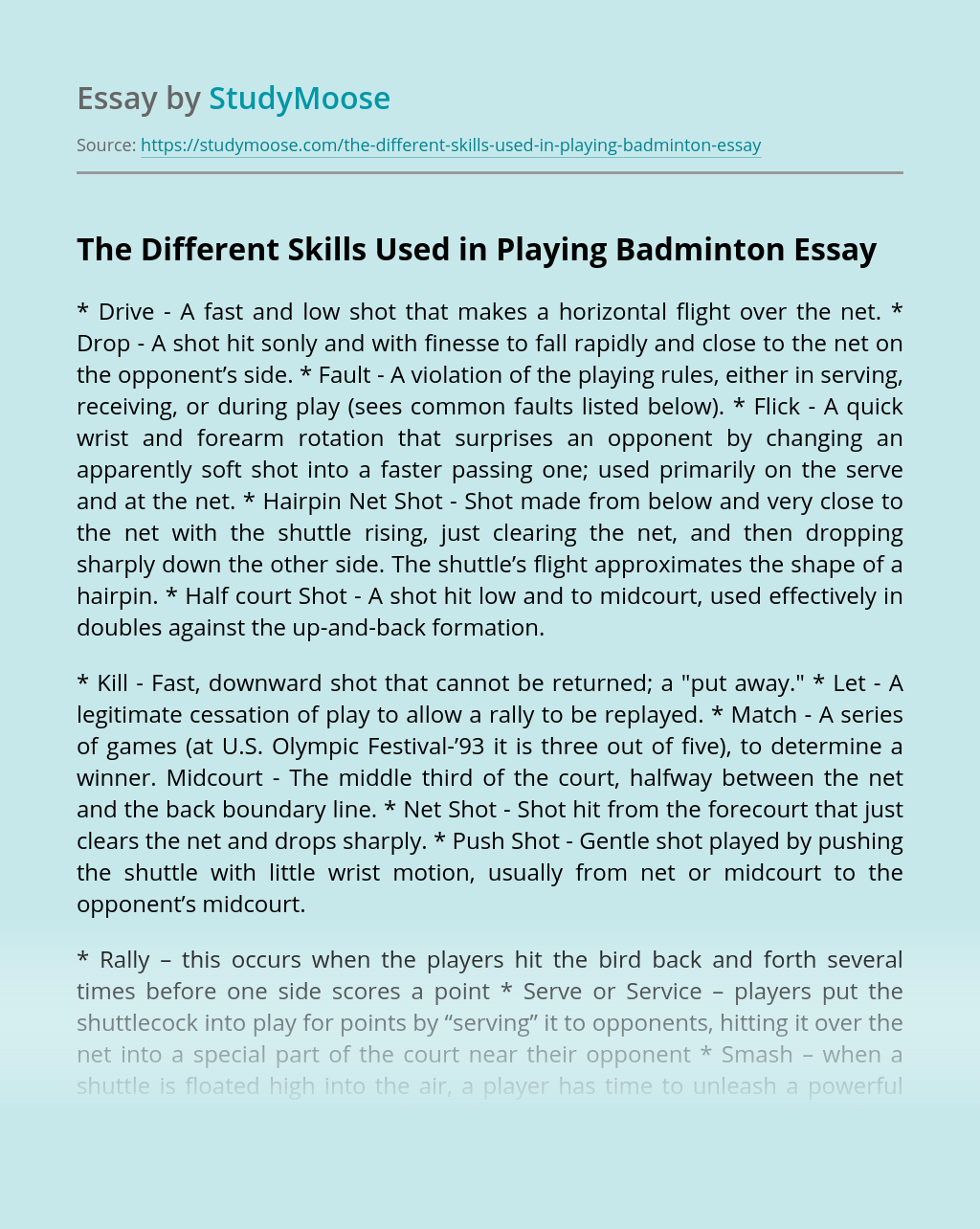