Appearance and presentation has involved itself in society too much. If certain people in society don’t like an appearance or a first impression on specific people, then that person usually is not spoken to or acknowledged too often.

Don't use plagiarized sources. Get your custom essay on
“ Scarlet Letter’s Among Society Today ”
Get custom paper
NEW! smart matching with writer

It’s because too many people in modern life don’t look at the inside of a human being; they look at the outside. The outside of a human being consists of clothes, hair, cleanliness, or looks. These characteristics in life shouldn’t matter, but for some reason they do. That’s the same event that happened to Hester Prynne in The Scarlet Letter, except she was looked down upon because she committed adultery and the society of that time didn’t accept her for who she was.

Instead they hated her for her actions she did in the past. Hester was good on the inside, but society looked at her a being basically as a tramp just because she had the scarlet letter: “A.” Once people in society saw the “A”, they automatically became aware of her sins and disliked her.

Popularity and recognition includes how well a human is like by society or how often they’re featured on television or at party’s, or even in public.

When younger an in high school, popularity and recognition are too important to every student. Current day society builds every event and human being up to bigger deals than they really are especially movie actors and musicians. Movie actors are almost god-like to different people in different ways, even though half of them are snotty or self-centered.

Musicians make too much money in current society when over half of the musicians don’t even deserve a cent because they are horrible at making music and don’t make their own music. To relate this to The Scarlet Letter is easy, because Hester is not very popular after her sins were recognized by society. But before her sins were known, she was beautiful lady that any wife was jealous of. She was recognized as a whore and her daughter was basically looked at as a bastard child.

Money is the greenbacks of life, as we know it and they are needed to survive in this world. Even though money is just colored paper with some print on it, it is worth more than life at times to specific people in society for some reason or another. Money today is represented by cars, clothing, and houses. Money is even used as a classification in modern life to classify one’s wealth and to classify personality. Most humans that have too much money let you know it, this is not true for all, but most of the time it’s the case. Money should not be used to gain another level up form one individual to another. Money in current life is much like Hester’s problems she faced during the novel.

Money is used to lower any given person’s self-esteem mentally, because if you don’t have it, you wish you had it. Hester’s self-esteem was lowered verbally, mentally, and physically during the novel by name calling, getting objects thrown at her or women wanting to kill her out of jealousy. But Hester didn’t let any of these bother her except the mental issues, because she had to live with her daughter Pearl and the man she cheated on supposedly, Chillingsworth. Hester pushed on with life, because she had conceived a child and was proud to raise it and wanted to guarantee her child a good life.

Modern day society cares too much about too many events and actions that occur in everyday life. These cares include clothing, looks, cars, music preferences, and wealth. Somehow, all these cares of current day society, relate to the cares of the society in the novel The Scarlet Letter. There are more “scarlet letter’s” that are present in today’s society than there was the duration of the novel, but the intensity of the events is the novel were stronger than currently is life. Fortunately, today’s events can be looked past or worked around. 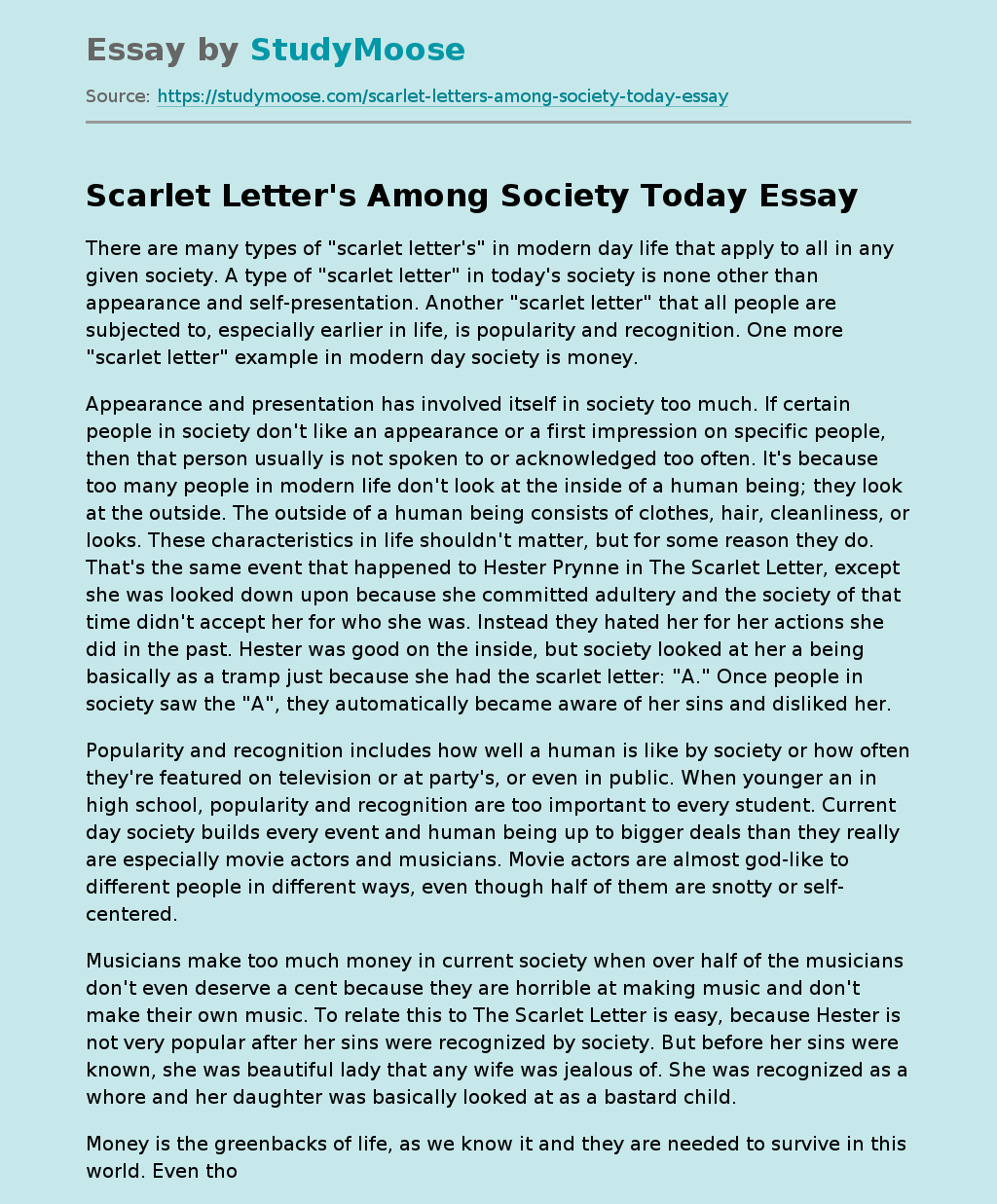