From many decades ago soccer has always been a sport where anyone is welcome to play and watch from little kids to teenagers and to elders who have had love for the game since they’ve been toddlers. So we will go into depth of soccer to see how it started, how its played along with the regulations/rules of the game and talk about the players that have changed the game forever and have made it so popular…. First off the sport name wasn’t always called soccer till it came to the United states, it was called football.

Don't use plagiarized sources. Get your custom essay on
“ Soccer speech ”
Get custom paper
NEW! smart matching with writer

It originated from many other sports such as Tsu-chu translated “kick Ball” a game that was played by the Chinese in 206-255BC and it started to be called soccer in the 16th century of Europe and England but very different to the game up to today. Football was slowing becoming a well know sport it started creating leagues, The first president of FIFA was Robert Guérin.

The first tournament FIFA staged, was on the football competition for the 1908 Olympics in London despite the presence of professional footballers. So After the big deal of Football been played around the world and having leagues a set of rules and regulations were made…. these rules weren’t made by FIFA, these rules were made by a college named Eton College that made the sport famous in colleges and in many schools and colleges these rules were called “Cambridge rules” There are some rules that might just save your life such as wearing the gear that is mandatory, but try not to wear jewelry when you play Cleats

Shin Guards
Socks
Uniform Now that you know what your suppose to wear, were going into the rules of the game.

Now before each game is started there a ceremony for both national anthems of the country or the league after there is initially a coin toss to see who gets the ball. After that the ball is then set in the middle and the ball must go forward or pass it in front of the teammate who is aside of you. In order to have a clean and fair game you must follow all the rules, there is a referee on the pitch and there is 1 ref on each touch line to see the off-sides or even a foul that the on pitch ref doesn’t see, in big cup games they have refs standing in the goalie line to see if the ball goes in or not. Now that you know what fouls are and how they are called and handled you must know the boundary lines and what happens when the ball is tossed out beyond the touch line, how corners happen and what happens if they get fouled inside or touch the ball with there hand in the goalie box Now that you guys know the basics of rules and regulations ill tell you about the players that have changed the game forever.. Pele, one of the two most famous and synonymous names in football, is arguably the greatest footballer that’s ever lived.

Voted as the footballer of the century. As soon as Pele hit the scene for Santos as a 15-year-old, it no longer became acceptable as a forward to wait for chances in and around the penalty area. With never-before-seen dribbling skills, pace and short give-and-go passing ability, as well as a viciously powerful shot and remarkable overall technique. That, along with his unbelievable ability to beat defenders in the air and score headers for fun, made Pele the most prolific goalscorer the world has ever seen.Seventy-seven goals in 92 caps for Brazil and 1281 goals in 1363 games for Santos and the New York Cosmos makes this Brazilian legend a true footballing God. Have you ever wondered why Soccer is one of the most played sports around the world? Hopefully I can help you guys understand why it gained so much popularity… And as people and technology kept advancing so did the game of Soccer…. So here is A map of all the members of FIFA according to the Confederation;

CONCACAF: Confederation of North, Central American and Caribbean Assoc. Football in North and Central. UEFA: Union of European Football Assoc.
CONMEBOL: Confederation of South America.
CAF: Confederation of Africa.
AFC: Asia Football Confederation in Asia and Australia
OFC: Oceania Football Confederation FIFA was founded in Paris on May 21, 1904; the French name and acronym persist even outside French-speaking countries. The founding members were the national associations of Belgium, Denmark, France, the Netherlands, Portugal, Spain, Sweden, Switzerland. Also, that same day, the German Association declared its intention of affiliating through a telegram. So the first set of rules on how to play are the basic; Avoid touching the ball below your shoulder blade or it will be called a handball. Only the goalies can grab the ball inside there area or when your throwing it in.

Any extra stuff like; Ankle/Knee braces, tape During the game of 90 minutes and just getting 15min of break and going back and forth at each other in the game gets very physical and reckeless but sometimes people like to flop just like in any other sport. Out of bounds line Cristiano Ronaldo is the man who has taken football to a completely new level altogether. The Real Madrid and Portugal star has put the audacity into football, making cheeky back-heel goals acceptable, making step-overs popular again, and giving birth to the piledriver free-kick.After his world-record £80 million move to Los Galacticos from Manchester United. Having scored 74 goals in 81 games for Real Madrid since his transfer, as well as making 20 assists, Cristiano Ronaldo is showing the world no matter how much a players costs, his fee can always be returned After the leagues were created soon came The FIFA World Cup, often simply the World Cup, its an an international association football competition. in 1930, except in 1942 and 1946 when it was not held because of the Second World War. The current format of the tournament involves 32 teams competing for the title. A qualification phase, which currently takes place over the preceding three years, is used to determine which teams qualify for the tournament .

The 19 world cups Have been won by eight different national teams. Brazil have won five times, and they are the only team to have played in every tournament. The other World Cup winners are Italy, with four titles; Germany, with three titles; Argentina and inaugural Uruguay, with two titles each; and England, France, and Spain, with one title each. The World Cup is the world’s most widely viewed sporting event; an estimated 715.1 million people watched the final match of the 2006 FIFA World Cup held Now that you’ve seen all the famous people who have changed the game, the last of many people who change the game up till today are us teenagers with the dream of making it to the big leagues because some people think this sport is more then a sport its more of a life……. and that’s why soccer is such an art to people. Now I hope to have gave you an idea or an understanding of how football(soccer) started from the early ages and how it has progressed as time has passed, along with all the rules and regulations and the players that have made football a sport that people have fallen in love with 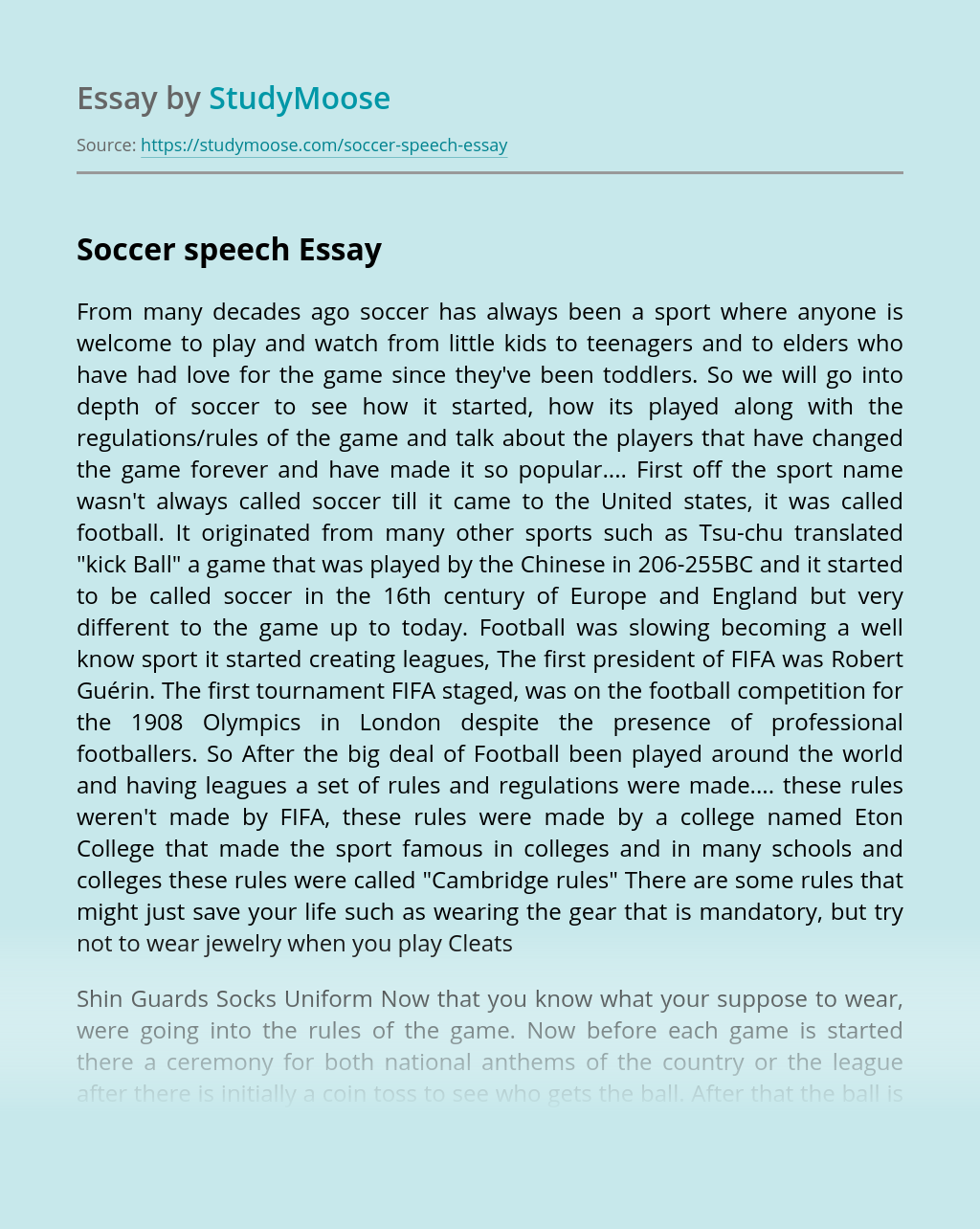