Origins and Evolution of Ipe

Origins and evolution of IPE and its relationship with International Relations, Comparative Politics and Economics International Political Economy can be defined as the study of how economics and politics influence each other in the global system; the interaction of those two aspects of the global society. IPE focuses how governmental policies affect the way economic resources are used and what are the consequences of those policies, especially economic consequences (welfare consequences). Although the terms “globalization” and IPE are relatively new, global political economy, as the study of interaction between politics and economics, has existed for more than a century.

Don't use plagiarized sources. Get your custom essay on
“ Origins and Evolution of Ipe ”
Get custom paper
NEW! smart matching with writer

The first global economy took place during the nineteenth century when the British Empire was the center and hegemony of the global economy and trade. In a time when mercantilism was the dominant economic system, Britain made its economy more flexible and opened to the exterior; this first global economy was based on bilateral agreements that reduced tariffs and on a stable international monetary system (starting with the British abolition of Corn Laws and the British-French Cobden-Chevalier Treaty).

The gold standard was also adopted by many nations as the fixed rate exchange. By these years, the first perspectives of international political economy were used to explain the situation and the future of the global economy: • Liberalism: that encourages international economic interactions in order to enrich each of the involved countries. Individuals are the main actors ruling the economy and cooperation benefits all of them. • Mercantilism: which argues that economic power is necessary to gain national power; it supports that the State is the most important actor in economics.

• Marxism: that divides the global economy in two groups: advanced countries that explode the poorest countries. However, the beginning of the twentieth century was characterized by multiple changes in the system. The First World War meant the collapsed of the British hegemony and the raise of the American power.

Despite the collapsed of the global economy in 1929, the Great Depression, USA regained its economic power during and after the Second World War (period known as the Pax Americana). Since WWII was caused in part by the failure to reconstruct a stable global economy after WWI, United States, as the hegemonic power, worked in order to create international institutions to provide a more stable structure and integrated international economy. Therefore, developments after 1945 have increased the interactions between economies. In this post-war period, new international organizations were created: World Trade Organization, International Monetary Fund, and the World Bank have strongly shaped the international political economy and its study. Today, the understanding of their function is essential to the study of IPE; they are key focuses of the IPE. However, some argue that the IPE was not developed until the 60’s and 70’s, when the Pax Americana was declining.

This was a period characterized political and social instability; economy was not as prosper as it used to be in the past and the Cold War was increasing the international tension between capital and communist blocs. Moreover, events such as the Oil Embargo in 1973 and the breakdown of the Bretton Woods monetary system are key factors that influenced the development of IPE. For these reason, the old theories were not able anymore to analyze and understand the global political and economic situation. Theories like the hegemonic stability, which argues the necessary existence of a hegemonic country which controls the global political economy, failed in their attempts to predict the future of the international system based on state-power explanations. USA hegemony has been collapsing since the 60’s; however, cooperation, interdependence and global trade since then have increased successfully.

Today, the global economy is dominated not only by United States, but by Japan, Germany and France. Moreover, IPE today is facing the challenges of a more globalized political economy, where new actors have key roles in the function of the system, such as China and India. By examining the historic events of the international environment during the last centuries, we can notice how important the interaction is between economic and political factors in the global system. Economic tools, such as tariffs, clearly determine openness and global trade: the lowest the tariffs of states, the greater the openness of economies (periods from 1820 to 1879 and from 1946 to 1970). Those periods of open economies correspond to the raising of the British and American hegemony.

On the other hand, we can notice how these economic interactions shape States’ foreign policies: normally, trade is concentrated within regions not only because of comparative advantage, but by political choices or dictates (Krasner, 29). Nowadays, globalization is creating a lot of controversy and disagreement about the future of our international system. While some emphasizes the benefits of a more interdependent and cooperative economy, others argue that globalization consequences are social inequalities and financial crisis. The challenge today is to decide whether the states should increase global trade or close their economies. Those political decisions are strongly influenced by social and public opinions; if individuals and other economic actors reject globalization, policies would be created to protect their national economies rather than maintaining the openness. History demonstrates how political actions of individual states clearly affect international trade and relations; at the same time, those policies affect the behavior of economic actors in the international environment and foreign policy of other states.

The most dominant approach today is the Open Economy Politics, which include new units of study such as the interest of particular groups, the role of institutions and the influence of one state’s decisions in other states’ behaviors. International Political Economy (IPE) is a “maturing interdiscipline” As we mentioned before, Political Economy, as the study of the interaction between economics and politics, is not new. However, during the past decades, changes in the global system have led to new and more developed studies, and IPE has emerged as new and renovated interdisciplinary field. IPE was born, as know it today, when scholars realized the importance to understand the simultaneous growth and conflict in international markets in the 60’s and 70’s. Since its birth, IPE has evolved and many different approaches have risen. On the one hand, the dependency theory was developed, which argues that the world is divided in a periphery (the poorest countries) that is dominated by the core (the most developed countries).

On the other, the hegemonic stability theory was also created, which supports that the existence of a hegemonic power is necessary in other to control and stabilize a global economy. Another approach to IPE also emphasizes the importance of interest groups in trade policies. As we can notice, new perspectives and situations lead to different approaches. Today, the dominant approach is the Open Economy Politics (OEP), which incorporates new and more explicit variables to the study of the international political economy. OEP focuses in how individual or groups are affected by particular policies, how institutions aggregate conflicting societal interests and rule the political game, and how states negotiate when necessary to influence one another’s behavior. Therefore, we can see how IPE has grown and improved in the last decades to adjust their methods to changes in the global system. New tools and research methods have undoubtedly improved IPE outcomes.

However, David Lake argues that it is not perfect, and there is a lot to improve. ”For the same reasons that substantial intellectual progress has occurred in the past, I remain optimistic about the future of this emerging interdiscilpline” (Lake 2004) In conclusion, as long as the global political economy faces changes and new challenges, IPE has to adjust its methods in order to better explain international interactions and their influence in economy and politics. Although the IPE filed is rapidly developing nowadays, it can improve its theories.

We also need to remember that globalization is changing our current system, and that even though IPE predicted this current era, it wasn’t as accurate as it could be. Many experts argue, for example, that globalization is increasing inequalities around the world and that more protectionist measures must be taken (Oatley p. 362). A better understanding and development of the IPE would help us understand and take decisions about our current economics and politics, and would help us predict the outcomes of those measures we take. As Jeffrey Frankel says, globalization is neither new nor very extensive; the same way IPE has been developing for years, it must keep emerging new theories and methods.

First of all, I want to emphasize that I do not consider IPE as a methodological approach, but a set of studies that attempt to explain international trade and politics; IPE is not a group of rules that countries and economies have to follow, but theories that help us explain the outcomes of our economic and political actions. Personally I do not think that any particular event or politic-economic decision is a direct outcome of IPE. Instead, what I think is that IPE is an essential social science that helps us to understand economic and institutional behavior in the international arena. IPE has showed us how politics and economics are not separate aspects of our society, but they are complementary and interdependent pieces of the international system. Although there is a lot to develop in the international political economy field, it has been able to predict outcomes of our political and economic decisions.

Therefore, IPE does not directly tell us what policies we should apply, but show us the consequences of each one of them and help us to take decisions based on predictions. Also, IPE has showed us that our society is in continuous change; although there are many factors that are repeated throughout history, there are also new challenges that appear in each different period. The study of International Political Economy can better prepare us to face the new challenges of our society: the emerge of new powerful economies such as China and India and how their appearance will change international relations, the implications of the last global financial crisis, the roles of new social force and international institutions, and many others.

Origins and Evolution of Ipe. (2016, Nov 07). Retrieved from https://studymoose.com/origins-and-evolution-of-ipe-essay 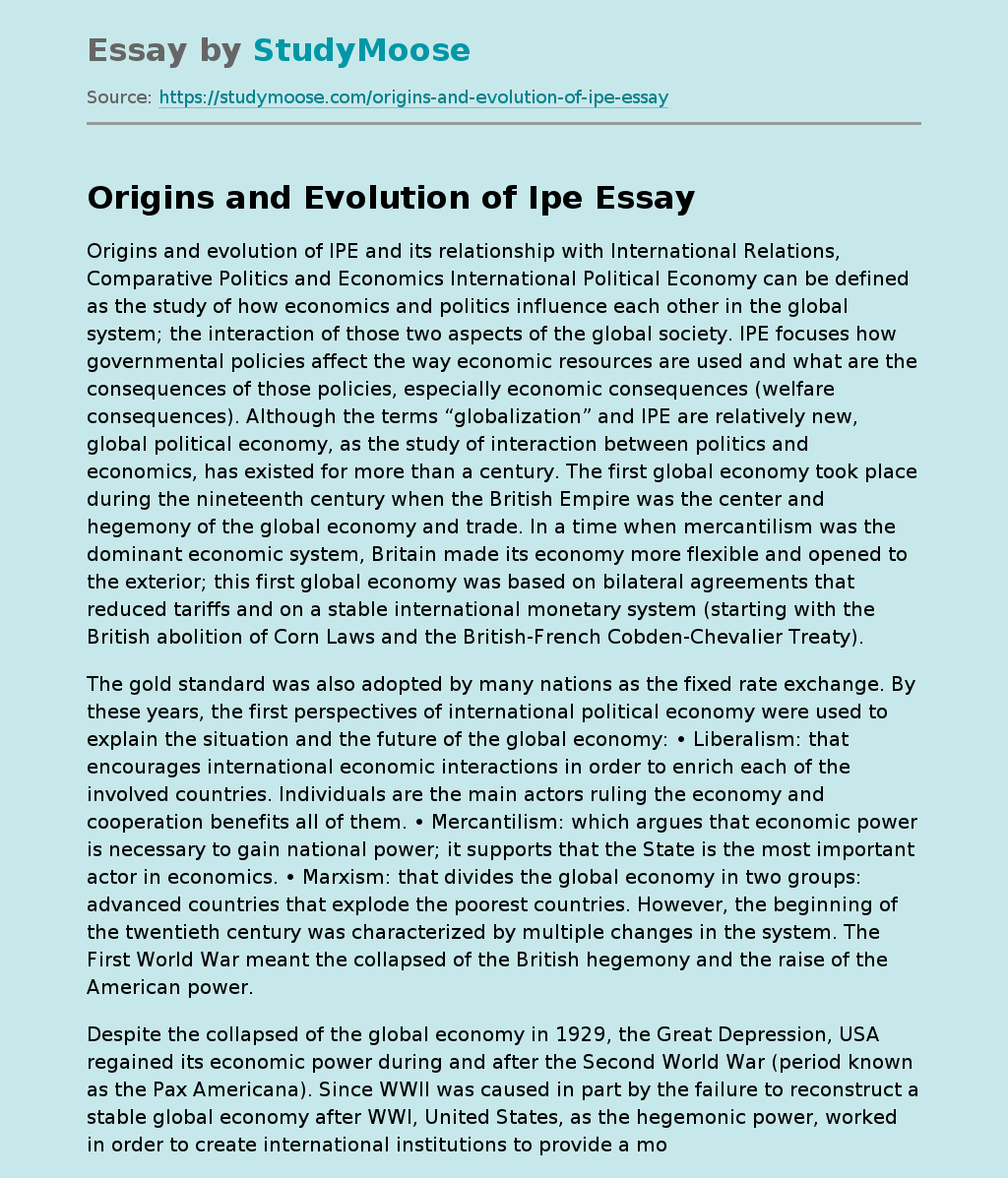